Fully equipped touring bikes, including ‘full-dressers’ have a reputation of being a fairly exclusive breed – but they don’t have to be. While it’s true that the most extreme and luxurious offerings, such as Honda’s GoldWing, are not just enormous but prohibitively expensive as well, there are also plenty of more conventional and affordable offerings. And while this category has certainly slimmed in recent years, with the demise of bikes like Triumph’s 1200 Trophy and Kawasaki’s 1400 GTR, there’s still plenty of variety.

What they all offer, of course – in many cases better than any other type of bike – is long distance cruising comfort for two, the sort of luggage options other machines simply can’t match and luxuries and equipment, sometimes including stereos, more akin to cars than most motorcycles. Sure, some adventure bikes can deliver a similar experience, but a bespoke, road-orientated tourer takes comfort and ease to another level.

Nor does all that necessarily add-up to bikes, which are ungainly or unable to entertain on sweeping country roads. The days of wobbly BMW LTs are long gone. So what’s currently out there and what do you get? Here’s our pick of ten of the best, in ascending price order, to help you decide… 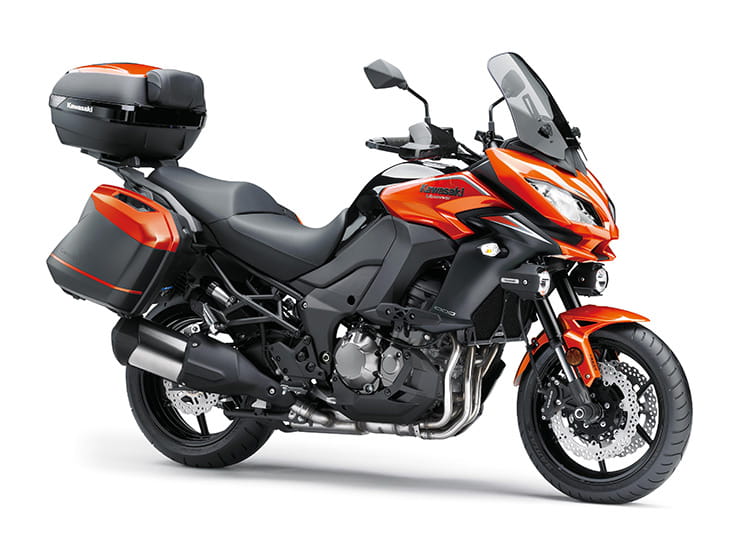 Few bikes are as difficult to pigeon-hold as Kawasaki’s big Versys. Is it an adventure? Styling aside, not with its four-cylinder engine and road chassis it’s not. And seeing as Kawasaki themselves have now come up with this Grand Tourer variant, which comes complete with three boxes, inner bags, hand guards and satnav holder, ‘Tourer’ seems more appropriate than most.
And, particularly considering the price, a good tourer it is as well. While the original Versys 1000, which is basically a taller, upright, semi-adventure-styled Z1000, was something of an oddball, a 2015 update saw it evolve into a practical, comfortable, effective and still great value tourer. That update brought revised styling, improved ergonomics and engine tweaks to the detuned four to now produce 118bhp along with masses of easy grunt. There’s a new slipper clutch, three-way traction control and rider modes while all the touring extras are a boon, too. Yes, it’s still slightly odd, hasn’t the sporting sharpness of its Z1000SX sibling and lacks the prestige and pedigree of a BM, but it suits taller riders well and does the job impressively. 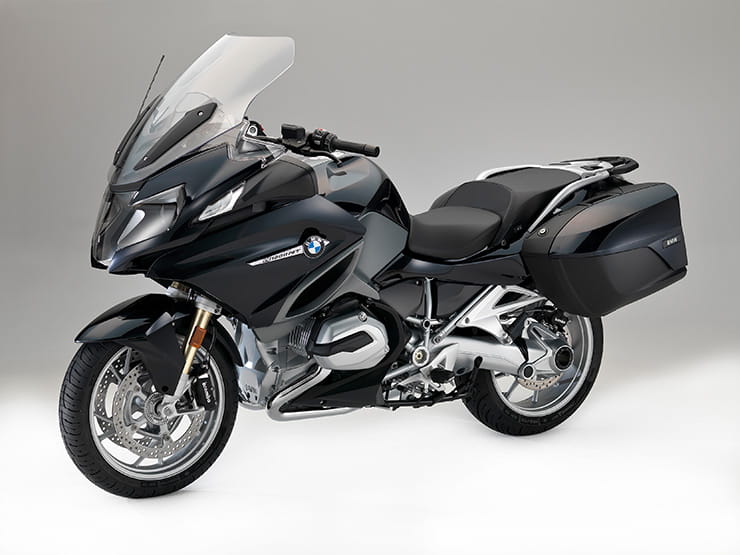 It seems odd to see BMW’s master-tourer RT so early in the price list, so it’s worth saying here this is the price for the base RT – the SE version (with fancy display, ESA, heated seat etc) is over £15K while the LE (with all of that plus quick shifter, chrome exhaust, tyre pressure control etc) is the wrong side of £16,000. But that distracts from the fact that the boxer RT even in base form is arguably still the definitive touring bike. All-new in 2014 with BM”s latest, part liquid-cooled, 125bhp boxer engine, it’s brilliantly effective. The new motor has plenty of punch yet is smooth and easy; the enormous fairing and electric screen are cosseting; comfort, complete with adjustable seat, is sublime and, despite its apparent bulk, the RT is also surprisingly light, lithe and a decent handler. All of that and, despite an early recall, the RT also has a peerless reputation, enviable badge, classy build and, depending on spec, exactly what mix of luxuries you want. 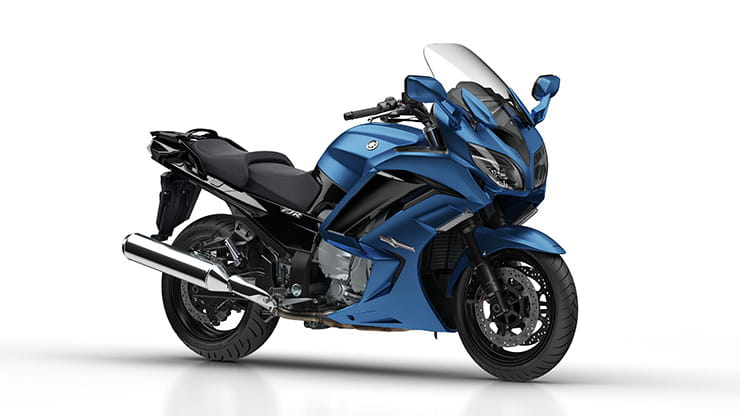 Yamaha’s big, purpose-built tourer seems like it’s been around forever, the original was launched back in 2001 as a successor to the brilliant FJ1200, after all – but that clouds the fact that it’s also, partly through repeated updates and refinement, evolved into one of the best all-round tourers you can buy. Its big, unique, 1298cc, shaft-drive four is at once grunty, smooth and 146bhp fast; fine-handling means it stakes a claim as a decent sports-tourer, too (albeit a big, heavy one); it’s unshakably competent and durable (no wonder it’s so popular with the emergency services) and, since a 2013 update, it even has some rider modes and traction control. In addition, there’s also an AE version with electronically-adjustable suspension (from £16,599) and an AS version, with ESA AND novel clutch less gearchange (from £17,099) to whet your appetite as well. Yes, overall, the FJR is now a little dated and ‘old school’, but it’s still a brilliant tourer. 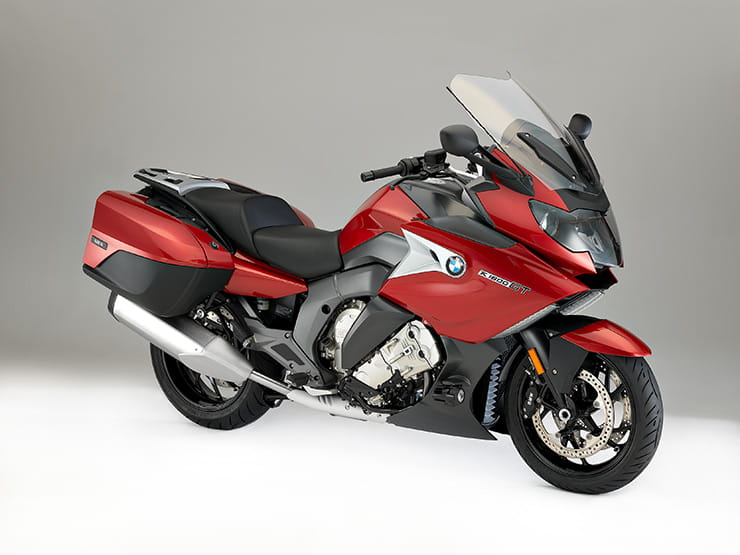 Honda’s new Gold Wing aside, tourers don’t get any more six-cylinder slick, sophisticated and, well, substantial than BMW’s brilliant, transverse, six cylinder-powered K16s. But while the latest Honda chimes in at 30 big ones, the BM starts at a comparatively bargain £17-odd K.

First launched in 2011, originally as the panniered GT and ‘full dress’ GTL, the BMWs redefined touring performance (thanks to their 160bhp), smoothness and luxury. Handling, despite its size, impressed, too. Updated in 2017 for Euro4 and now with next generation ESA, they remain the slick limousines of the bike world. In standard form they’re well-equipped and peerlessly comfortable and able but if you tick all the options with such as heated seats, audio system, Dynamic ESA, tyre pressure control, quickshifter and more there’s simply no other machine in motorcycling that’s as lavishly equipped and yet 160bhp potent as well. 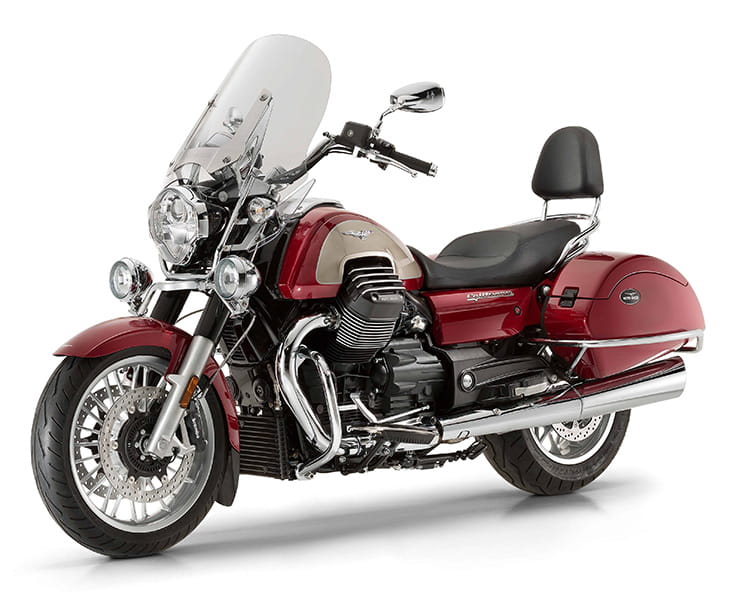 Grand old Italian marque Moto-Guzzi have long played the ‘old fashioned’ card: their characteristic and characterful shaft-drive V-twins allied to a spaghetti western vibe has always been a major part of the appeal – a sort of Italian Harley, if you will. Yet they made a big jump into the 21st century with their all-new, California 1400 in 2014. Although still more ‘cruiser-tourer’ than pure tourer, everything about Guzzi’s flagship was brought near-as-dammit up to date. The 1380cc V is still transverse and shaft drive but there’s now a healthy 95bhp, rider modes and traction control to go with its grunty, lumpy character. Handling, though a big bike, is adequate; comfort is good and its art-deco inspired looks are fabulous, too. Furthermore, in this latest ‘Touring’ version, it comes with a ‘sissy’ bar, riding lights and more. Sure it’s no gizmo-laden BMW and remains a bit basic and lumbering, but it’s more than capable and has a style and presence few rivals can match. 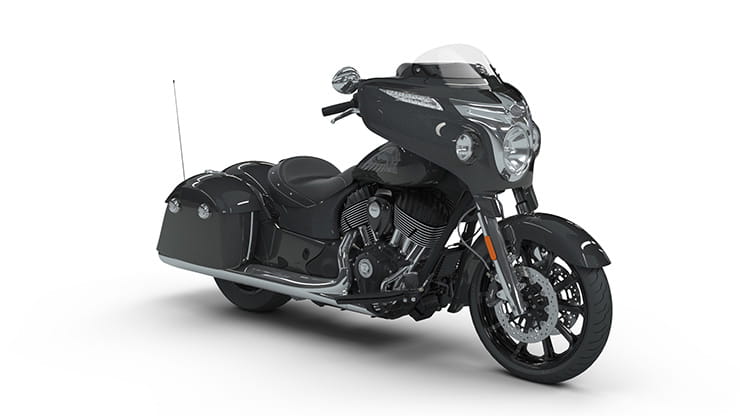 After decades of Harley-Davidson having things all its own way as America’s only major motorcycle company producing, among others, the definitive US-style V-twin cruisers and tourers, Polaris acquired (in 2011) and relaunched the historic Indian brand in 2014 with bikes so good Harley and the rest of the world have had to sit up and take notice. One of the first of these was the Chieftain, a half-faired cruiser-tourer in the Harley Street Glide mould. Like the Hog it’s a ‘bagger’ – a cruiser that’s morphed into a tourer by way of hard panniers and screen/fairing and, while maybe not most Europeans’ idea of a touring bike it certainly is America’s and worth considering here. At its heart is the same 1811cc ‘Thunderstroke’ V-twin that powers all Indian’s big twins, which, with 100bhp and fistfuls of grunt simply out powers most Harleys. Comfort is laid back; quality and style impeccable and handling decent, too. The only question, really, if you’re after an American tourer, is whether you’d rather go for the ‘full-dress’ version, the Roadmaster and, considering its fairly high price, whether you can be tempted away from Harley – but lots have. 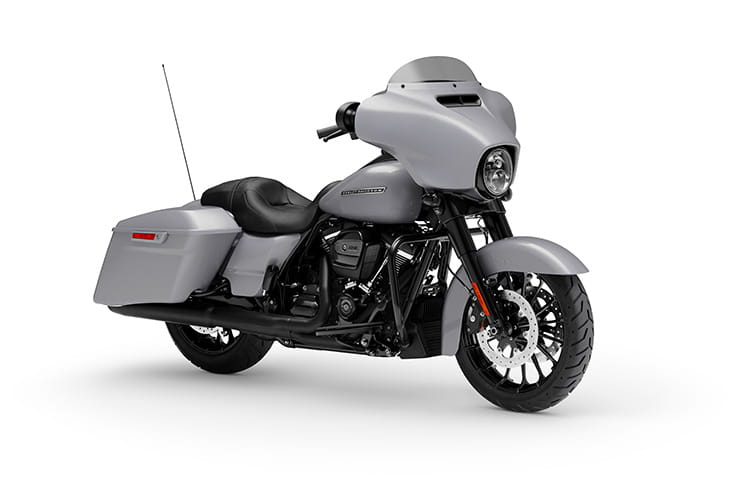 Like the Chieftain, the Street Glide is a very American take on the touring bike in being a bagger – a laid-back cruiser with added long distance practicality and comfort courtesy of standard hard panniers and half-fairing. But while plenty of baggers make do with a plexi-glass screen, for the sake of touring purity we’re only considering proper faired versions here (oddball Moto Guzzi aside). What you get is necessarily a bit of a compromise: being a cut-down Ultra Glide the Street is less of a tourer than its full-dress brother but it’s a mix that still delivers and has proved hugely popular in the US where the Street Glide outsells every other bike. As such it’s comfortable-ish (but lacks the back rest and broader pillion of the Ultra); its updated (in 2017) chassis and 88bhp ‘Milwaukeee Twin’ engine rumbles along adequately; the brakes are the best ever; the panniers provide reasonable carrying space and there’s even a stereo to entertain as you pile on the miles. Best of all, though, it makes you feel like a modern cowboy, even in Carshalton. 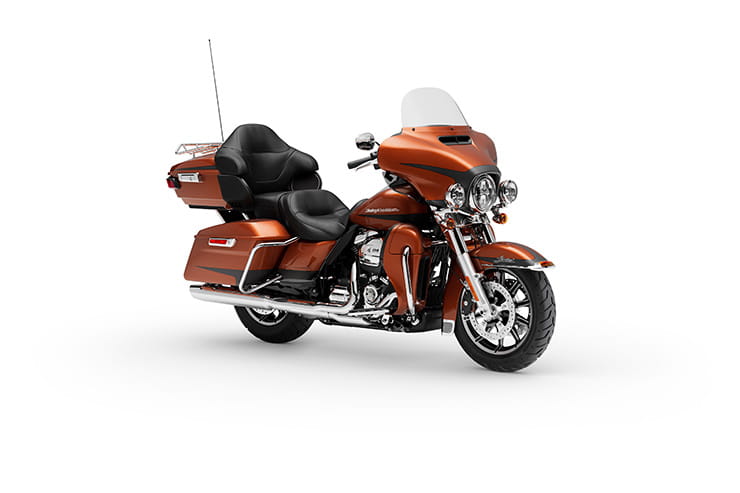 If ‘baggers’ like the Chieftain and Street Glide don’t fully convince as tourers, both Indian and Harley offer ‘full-dresser’ versions. The Ultra Limited is H-D’s latest incarnation of its legendary ElectraGlide the bike which, thanks to standard screen and panniers, was effectively the first factory tourer in the ‘60s. But although the tech and spec has markedly improved since, the recipe is essentially the same, to whit: rumbling, grunty, V-twin (now producing 88bhp in its latest, partially liquid-cooled guise); fork-mounted ‘Bat wing’ fairing (which also hold stereo and satnav); sumptuous seating (for two) complete with footboards and three-box luggage. Modern improvements have actually made the Glide far more competent and competitive than its ‘olde worlde’ looks suggest (lighting is now LED, for example) and, for many, it’s still an icon, but a modern BM or Yamaha will still run rings around it… 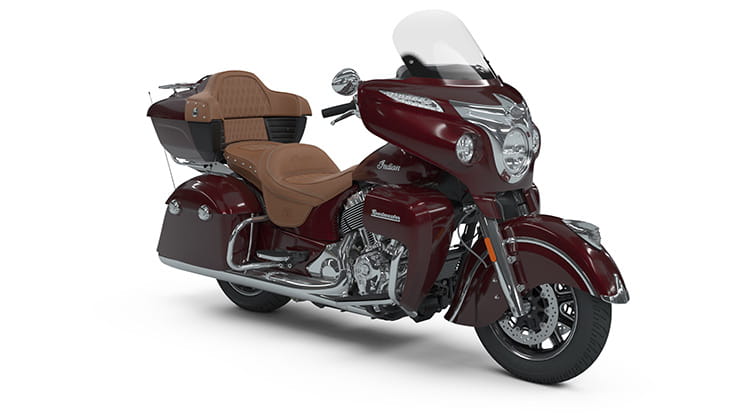 Like Harley’s Ultra Limited, the Roadmaster is Indian’s range-topping, ‘full-dress tourer. As such it’s based on the same 1811cc, ‘Thunderstroke’ V-twin platform as the Chieftain but similarly takes things to higher levels of comfort, weather protection and luxury. Although, like the Harley, its fairing is fork mounted, leg guards help give thorough protection. Otherwise it pretty much ‘out-Harley’s Harley’! Slightly bigger and more potent all round it also boasts leather seat, lashings of chrome and masses of cowboy-style luxury – if you like that sort of thing. Perfect, in fact, for cruising down Route 66, although being so big and heavy, despite half-decent handling, means that, also like the Harley, a BMW RT or similar will simply run rings around it on European roads. The more basic, leather panniered Roadmaster Classic is also available (for £23,899) while the top-spec Roadmaster Elite, with two-tone paint and even gold leaf badging, costs a whopping £30,299! 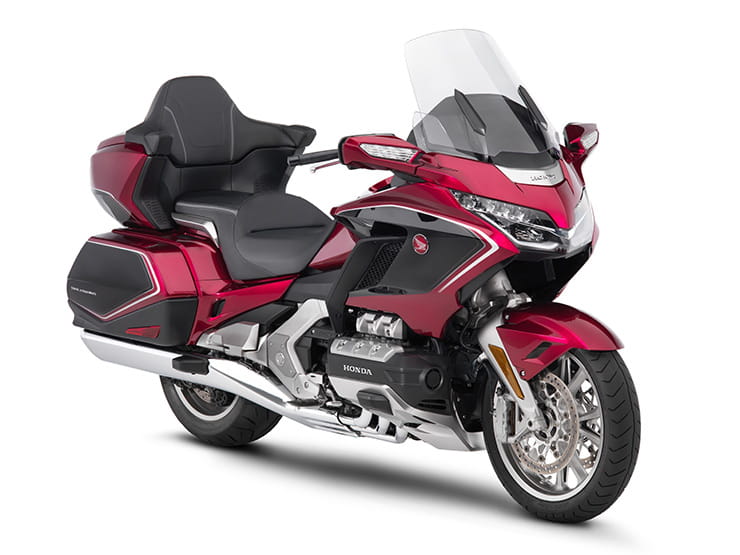 The bike that single-handedly redefined the whole touring concept in the late 1970s and early ‘80s is back with an all-new version for 2018 (the last all new ‘Wing came out way back in 2001) – and it’s better than ever. Although the flat-six ‘full-dresser’ recipe is unchanged, the whole bike is new and is a massive leap forward in terms of ability and tech. The 1833cc engine now produces 125bho and benefits from rider modes and optional DCT semi-automatic transmission; the whole bike is more compact and lighter which, along with the novel ‘double wishbone’ front suspension makes it far more manageable and a better handler than before and the brakes are stronger, too. Most impressive of all, though are the new luxuries and gizmos, including fancy TFT screen, electric windshield, keyless ignition, centrally-locked luggage, cruise control, fancy stereo, standard sat nav and much, much more. Yes, nearly £30K is a helluva lot of money, but once again the ‘Wing can rightfully claim to be the tourer with the most.