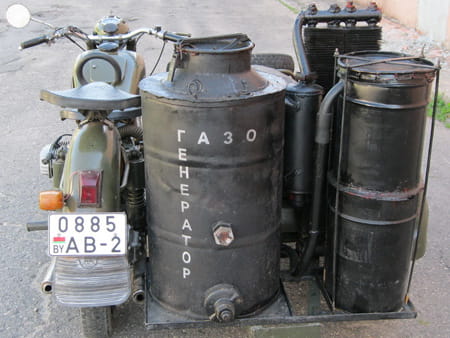 Russian motorcycles have never been regarded as fast sporting mounts - more basic forms of family transport as they have mainly come complete with sidecars that have the third wheel driven. As a result they have made suitable mounts on which to tackle adverse conditions often found in countries with similar topography to the harsh climate of mother Russia.

No matter what name is on the tank whether it be Dnepr, Ural, Cossack or Neval they have all been the same basic machine – a copy of the BMW Boxer engined sidecar outfit. The reason of course was that the Russians seized any valuable plant post-war in occupied Germany and shipped it back home and copied it.

Over the years the design has been updated and now Ural sidecar outfits are quite sort-after and considered trendy by those who want to stand out from the crowd and have a fair amount of spare cash as they are no longer cheap to buy. However, they are still very rugged, solid, good for world travel and relatively cheap to run, but probably not as cheap to run as the Belarus registered Dnepr pictured here powered by wood gas. 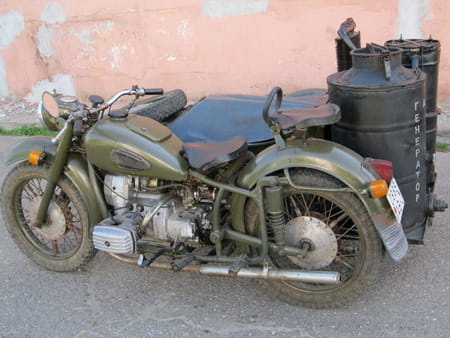 The strange contraption on the rear is wood gas generator made out of what appears to be an old milk churn, some oil cans, pipe, a radiator and lots of angle iron out of a scrap yard. Certainly it is about as basic as the outfit it is mounted to the rear of.

The use of wood gas sometimes known as ‘producer gas’ to run engines is not new and it was used during the second world war to power  a great many vehicles. (The first automobile to use it was actually built in Wolverhampton in 1901!)

Despite wood gas cars not being particularly elegant thanks to the generators, they are surprisingly efficient, if slow as it cuts the HP rating by about half, but their range is comparable to that of electric cars.

Many see them as an ecological alternative to petrol and diesel and with rising fuel prices and concerns over global warming, there has been renewed interest in this technology worldwide.

The gas is produced, or rather it is the resultant product from the incomplete combustion of carbon based materials like wood and charcoal. The process results in a gas consisting primarily of nitrogen, but also combustible components like hydrogen, carbon monoxide and methane and this sufficient to allow the engine to run when it is fed in by the usual method.

Systems to run cars and trucks are still manufactured in in Russia and China, but this home made one is one of the first to be seen on a motorcycle combination. Top speed is likely to be around 50 mph and fuel consumption measured in one sack of wood per 60 miles!

Despite the Japanese manufacturers looking at alternatives like battery power, let’s hope they don’t turn their attention to this fuel alternative as it could be a designer's worst nightmare and it is unlikely to catch on except for those who regularly camp in wooded areas – anyone got an axe in their toolkit? 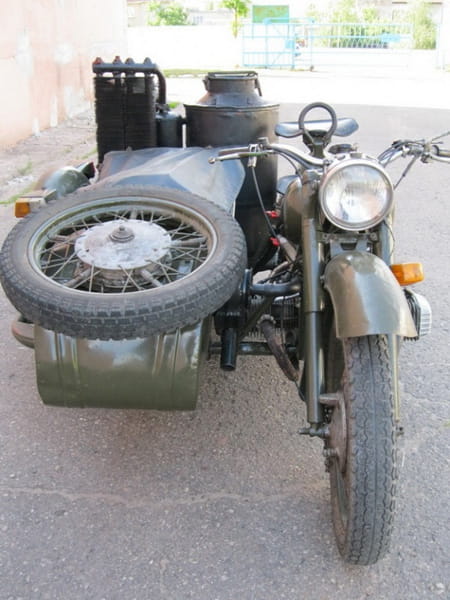