From road bike to track bike on a budget – part 2 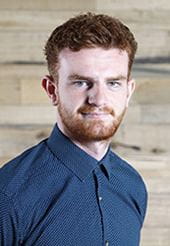 AndrewLuckie loves everything on two wheels (as long as it's not pedal-powered), and has a soft spot for sports bikes. A regular road rider for the past eight years, he currently rides a 2017 Ninja ZX-6R 636, and writes about various motorcycle topics in his spare time. More track days and bike trips abroad are constantly on his "to do" list. 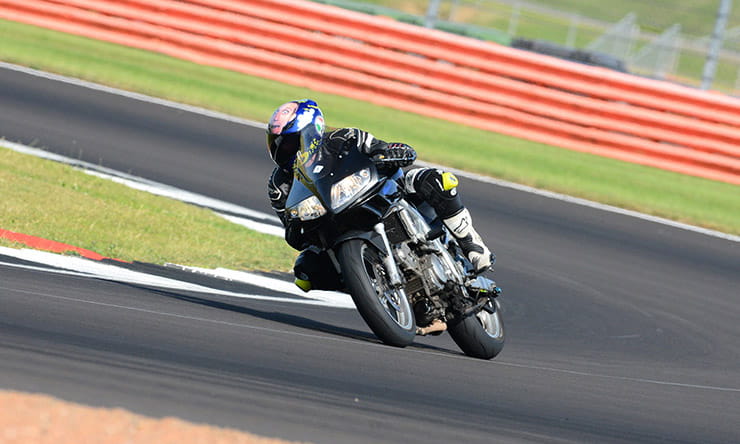 Following the work I’d done to my 2004 Suzuki SV650s since May to get it track-ready (as described in part 1), July was to be an exciting month for the bike and me. It was time to put the Suzuki to the test. I had two track days booked in to learn more about riding the SV, find out how it felt and understand what needed improving.

The first track day was at Snetterton on the 300 circuit, which I used to get to know the characteristics of the bike and how it performed in a different environment to the road, as well as in comparison to my Kawasaki Ninja 636, a bike I’m very familiar with and have ridden at Snetterton before. The 300 layout has a fantastic mix of fast, sweeping corners, slow, tight ones and a few long straights, which proved to be the ideal way to get my eye in with the Suzuki. After a day of learning, absorbing information and gradually getting more confident, it was time to prepare for track day number two.

I was lucky enough to be invited to Silverstone’s first bike track day since its well-publicised £5m resurfacing job. The Grand Prix circuit at the Northamptonshire venue has similar characteristics to that of Snetterton, boasting a variety of flowing bends, tight turns and a fast back straight. It’s just much wider, and much, much longer. Having an understanding of how the bike performed at Snetterton, this was my opportunity to concentrate on the finer details right from the get-go.

Above: in great company at Silverstone

When I bought the SV650, I knew that top end speed wasn’t going to be its strong point and I’d always lose out on the straights to 600cc sports bikes and above. But the 69bhp liquid-cooled 645cc v-twin was smooth, loved to rev, and had a grunty mid-range which helped squirt it out of corners. And for a 15 year-old machine, the clutch felt surprisingly light, too, and after finding a few false neutrals as I got used to the gearbox, shifting up and down was smooth.

This is one of the weaker points of the bike. Preload is the only adjustment you can make to the front and rear standard springs, and both are notoriously soft especially for track riding. But as a novice track day rider, the softness didn’t hinder me too much other than a lot of dive when braking hard for tighter corners. The rear was less noticeable for me, but could still do with an upgrade. Notably though, the softness didn’t take away from the fun I had riding on track both days.

However, suspension is still something I want to address in the next round of upgrades. There’s plenty of upgrade options available, but the best budget option I’ve come across is buying stiffer after-market fork springs (K-Tech and Maxton are most popular), as well as emulators and new fork oil. Again, for the rear, after-market shocks are readily available to buy but are expensive. A popular and cheaper alternative is to fit a stiffer compatible OEM shock from another bike, such as a 2006-2007 Kawasaki ZX-10R. Here’s a full list of compatible OEM rear shocks for an SV650. 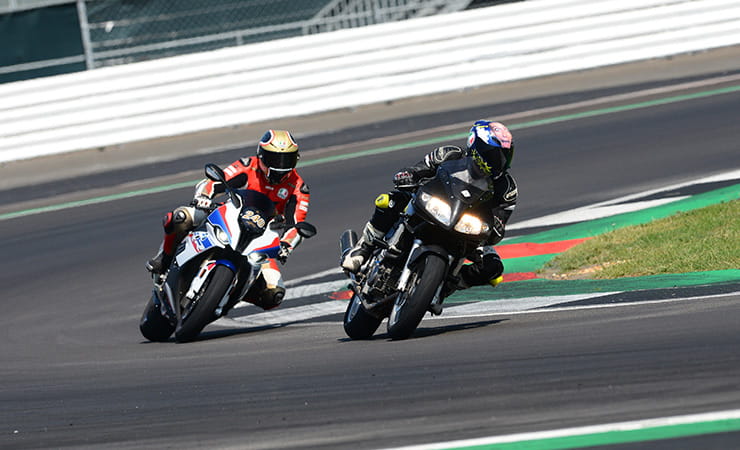 Above: being chaperoned by BikeSocial’s Michael Mann

Stopping power is of course one of the most important areas of any motorcycle. The standard brakes on my SV650 had seen some use, but front and rear pads and disks still had plenty of life left in them. But on track, I was underwhelmed by the braking power. The confidence inspiring initial bite was missing, and as I progressively pulled the lever closer to the bar and feathered the rear brake, there was an overall lack of stopping ability, which left me braking early and trying to carry more corner speed. Upgraded pads, disks and braided lines are on the shopping list.

The bike came on standard Pirelli Diablo road tyres when I bought it. But before going on track, I changed them to a used set of Continental Race Attacks. And I’m glad I did. They had an abundance of grip and feel at both Snetterton and Silverstone, heated up nicely and instilled confidence throughout both track days.

The reason track bias tyres are better than road bias tyres on track is because they have a softer rubber compound and more flexible carcass, and you can run them at lower pressures, meaning they heat up faster and provide a lot more grip as well as feel. I’d highly recommend doing this if you’re thinking of riding track days. For £45 for the set, sorting out the rubber hoops is one of the best and cheapest upgrades possible. 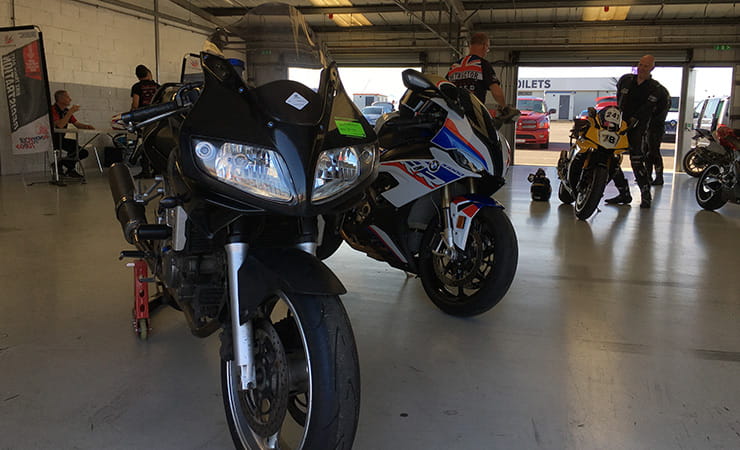 Above: sharing a garage with some modern-day marvels

On top of the suspension and brake upgrades I want to make, I’m also looking to replace the standard foot pegs for some rear sets. The standard pegs don’t offer much in the way of either ground clearance or grip when moving around on the bike. Again, there’s lots of after-market choices ranging in price.

My experience at both Snetterton and Silverstone confirmed to me that I’d made the right choice buying a 2004 SV650s as a budget track bike, and that you don’t need outright top speed to have fun. Actually, for me, quite the opposite. With the 2004 model weighing 169kg (just 8kg heavier than the same generation GSX-R600) the Suzuki’s relatively lightweight and composed nature, tied with manageable power inspired confidence and allowed me time to think about my body positioning and focus on the racing line. By the end of the final session at Silverstone, I made good progress in my track riding ability because I had time to focus on the important areas of my riding.

Time to find and fit the upgrades, and book another track day before the weather turns!

Or should I look at track training instead, utilising the instructors to build my experience? I’ll let you know what happens next in part 3.

It’s worth pointing out exactly what I’d packed for both track days. As it was only my second and third time riding on track, I’m still building up my kit, but I made sure the essentials were taken care of. This included extra fuel (there’s fuel stations at most circuits but it tends to be pricey), a socket set, spanners and screw drivers, a tyre pressure gauge and of course my riding gear. Packing your own food and drink is often overlooked, but I recommend bringing your own so you can keep hydrated and well-fed throughout the day, which is vital to keeping alert, without trips back and forward to the circuit cafe. Stand by for the full Track Day Beginner Guide video coming soon.