The most expensive production motorcycles of 2020

With the unveiling of Ducati’s eagerly-awaited, ultra-exclusive, top spec, €100,000 (£84,901, if you’re wondering) version of its Panigale V4, the ‘Superleggera’, which in turns follows the Italian firm’s launch of its updated Panigale V4 S last month it got us wondering: what are the very best, money-no-option production motorcycles available in 2020.

And there’s actually more – but sort of fewer, too – than you might think.

The Superleggera, as with previous examples of the range-topping breed (Ducati also did Superleggera versions of its 1199 and 1299 Panigale V-twins) is a tuned, lightened version of the V4 with a no-expense-spared approach to a specification bristling with carbon-fibre and titanium. The result, in this case is 221bhp, a dry weight of just 173kg and, most pertinently here, a price of €100,000.

But how does that compare, price-wise, to very best exotica out there? It’s a question that’s actually quite difficult to answer as hand-built exotica, by its very definition, isn’t necessarily easily available; the bikes themselves are often limited editions (Ariel’s recent Ace R, for example, is now off-sale); we’re ruling out track-only bikes such as Kawasaki’s Ninja H2 R because otherwise we’d have to include all-manner of one-off race bikes and some of the most recently announced, like Bimota’s upcoming Tesi H2, aren’t yet officially available. Others, meanwhile, such Arc’s £90K electric Vector, are now in question altogether as the company has gone into receivership.

But that still leaves plenty of hugely desirable, ultra-expensive, road-legal hyperbikes that you really can buy in 2020 if your pockets are deep enough. Here’s our pick of the 10 best – in price ascending order. 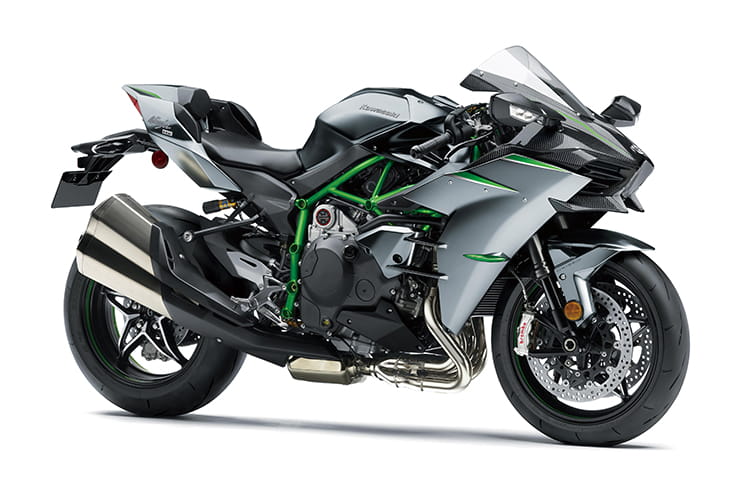 Yes, we know, the full-bore, 326PS R version of Kawasaki’s supercharged wonder as first introduced in 2015 is even more extreme and costs an eye-watering £49,500 in 2020, but that’s a track-only beast so doesn’t qualify under this definition. But worry not, the ‘standard’, road legal H2 version is hardly an underpowered wallflower, was updated with revised mapping etc in 2017 to produce 207bhp, delivers similar ‘chirping’ supercharger thrills, is almost as radical looking, is beautifully equipped and built and is a hilarious hoon to ride. It’s no out-and-out sportsbike – it’s too heavy and cumbersome for that. But as a fully modern and completely wacky speed monster successor to historic Kawasaki missiles such as the ZZ-R1400 and ZZ-R11, it’s more than worthy and hugely tempting – even at this price, which, actually, in this context seems quite reasonable. The standard H2 costs £26,000 while the limited edition ‘Carbon’ version, with carbon fibre upper and lower fairings, limited to just 120 examples worldwide, gives you just that bit more exclusivity. 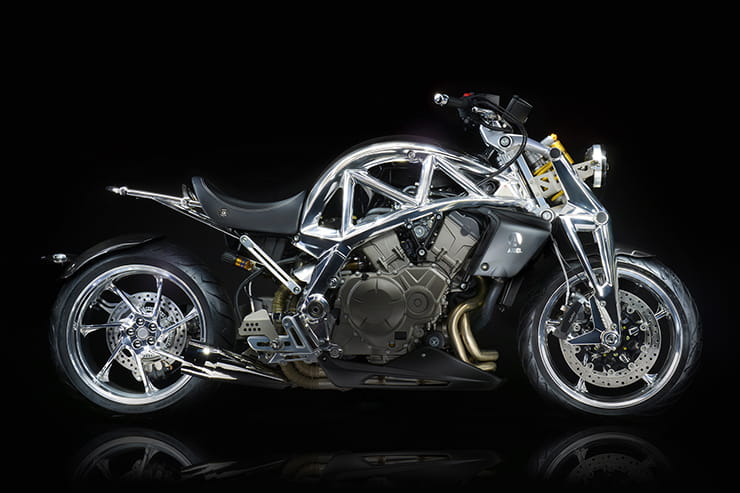 Revived British Brand Ariel, although focusing mostly on its lightweight Atom sportscars since its rebirth in 2001, have also been taking its motorcycling legacy seriously. The first Honda VFR1200 V4-powered Ace, complete with fabulous, milled aluminium ‘skeleton’ frame and optional girder forks proved a wonder both to look at and ride when it was first launched in 2014 and although boldly unconventional and no pure sportsbike (it’s more of a performance road cruiser) is classy and different enough to justify its whopping price.  The sportier, 203bhp, carbon bedecked ‘R’ version followed in 2018 for an even loftier £60K price and with that limited edition of 10 now sold, the Somerset firm have recently unveiled this more ‘back-to-basics’ ‘Iron Horse’ variant at a far more digestible £30K. Don’t worry, though, all the Ace goodies are still there, from the alloy frame to girder fork and Ohlins suspension plus it’s finished off with carbon fibre bodywork. Just as it should be, in fact… 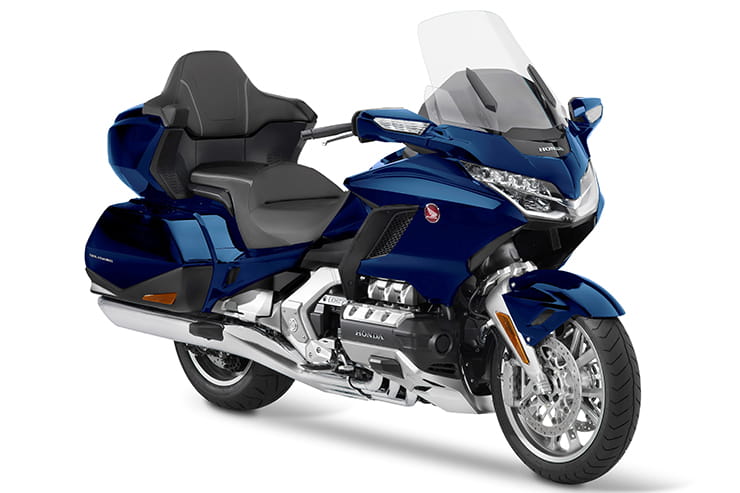 The GoldWing has, for over 40 years, been synonymous with full-dress tourer luxury and success so when Honda set about building an all-new version (the previous version had been little changed since 2001) they had their work cut out – but boy, in 2018, did they deliver. Although lighter and more compact than it’s predecessor, in every other respect the new Wing wants for nothing. Its creamy flat six now produces a wafting 125bhp; the twin spar aluminium frame and novel double wishbone front suspension gives hugely impressive handling, comfort, for two, as you’d expect is without equal but most impressive of all is the new bike’s phenomenal tech and equipment – and it’s that which most justifies the £30K price. The screen’s electrically adjustable, the car-style TFT dash is dazzling, there’s multiple rider modes, cruise control, satnav, heated seats and grips, Apple Car Play and more. Yes, a new base version, in a lower spec and without top box, can be had for a tempting £22K, but when you’re talking about excess you want the most and that’s the top-of-the-range ‘Tour’ version, complete with Honda’s world-leading DCT semi-automatic gearbox which truly wants for nothing. 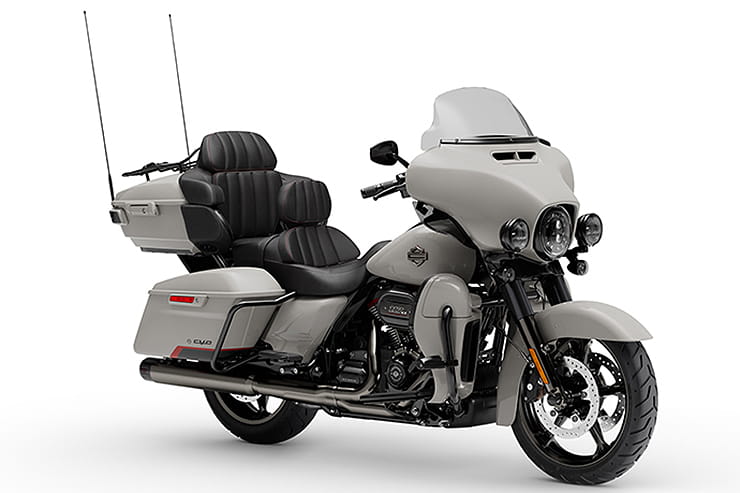 Honda isn’t the only ones with a legitimate claim for the world’s most lavish (and expensive) full-dress tourer. American giant Harley-Davidson’s ElectraGlide pioneered the ‘dresser’ tourer back in the 1960s, especially when fitted with the ‘Batwing’ fairing which first became available as an optional extra in 1969. And although the classic V-twin’s styling hasn’t changed much since its performance, sophistication and technology has greatly advanced in recent years. The Ultra Limited, from £24,695, is the latest example, coming with the grunty, 114 cubic inch (1868cc) ‘Milwaukee-Eight’ V-twin (producing 164Nm of torque), LED lights, Brembo brakes, TFT dash, slick ‘infotainment’ system and more. But if you want even more – and when you’re talking about this kind of bike, who doesn’t? –  for 2020 Harley’s Custom Vehicle Operations (CVO) division is offering a fully-loaded, limited edition version, called the ‘CVO Limited’ which, at a salty £35K gets an even bigger 117ci (1923cc) engine producing 166Nm, special paint and engine finishes and is littered with goodies from Harley’s extensive accessories catalogue. Harley’s don’t get flasher. 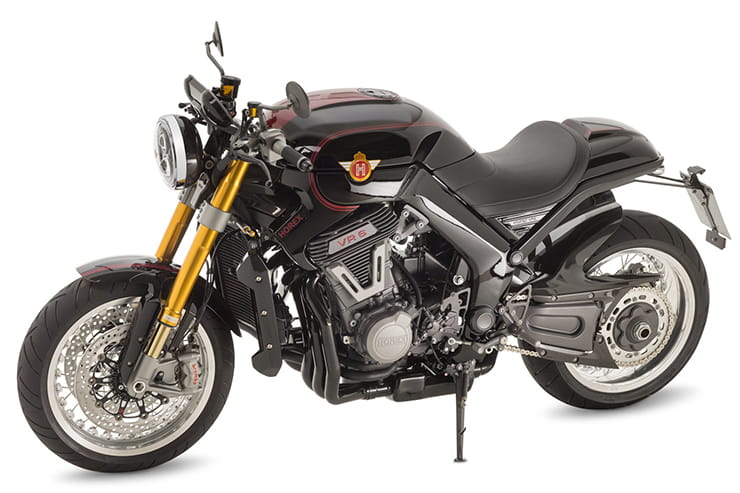 Lesser-known historic German marque Horex, which originally traded between 1923 and 1960, was relaunched in 2011 producing a high-end roadster powered by its own, narrow-angle V6. That company floundered in 2014 but it was revived again with new investment shortly afterwards and now produces two updated versions of that machine – the VR6 Classic and VR6 Café Racer, both costing well over £30,000. Both produce an impressive 163bhp, have an aluminium ‘bridge’ frame, carbon fibre sub-frames, have classic, retro styling, are lavished in top quality components and are beautifully built – as they should be at the price. While the even more luxurious, limited edition ‘HL’ variants raise the bar even further with a livery inspired by the classic Horex Regina, special wheels, badging and more. There are no UK dealers (although the factory near Munich says it would welcome UK buyers) its about as exclusive in the UK as modern luxury bikes get – and is also a decent performer – but it’s still a big punt for a bike so little known. 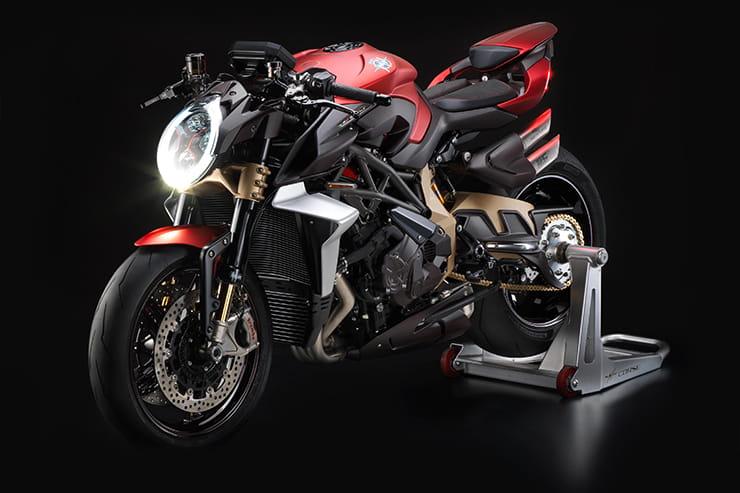 Italian legends MV Agusta are no strangers to luxury motorcycles or, over much of their history, from roller-coaster commercial fortunes. The original concern, an off-shoot of Agusta helicopters, became motorcycling royalty with its dominance of GP racing between the mid-‘50s and early-‘70s with transverse triples and fours ridden by the likes of John Surtees, Mike Hailwood and, most famously, Giacomo Agostini. Luxury four-cylinder road sportsters followed before, just as quickly, MV floundered in the late 1970s, overtaken by the Japanese two-stroke on track and underpriced by bikes like Kawasaki’s Z1 on the road. Cagiva relaunched the brand in 1999 with a new family of gorgeous, luxury-priced four (and later three)-cylinder nakeds and superbikes but its fortunes and ownership have continued to fluctuate. It’s latest offering for 2020 is a fully-updated version of its four cylinder, 1000cc super naked, the Brutale, which, in MV tradition, is first offered as a high spec limited edition called the ‘Serie Oro’. which is due to become available soon. Yes, it’s pricey, but in true MV tradition it’s also: beautiful, exquisitely-specced, and mind-blowingly fast (MV are claiming, with 212bhp, that’s it’s the ‘fastest naked bike in the world’). 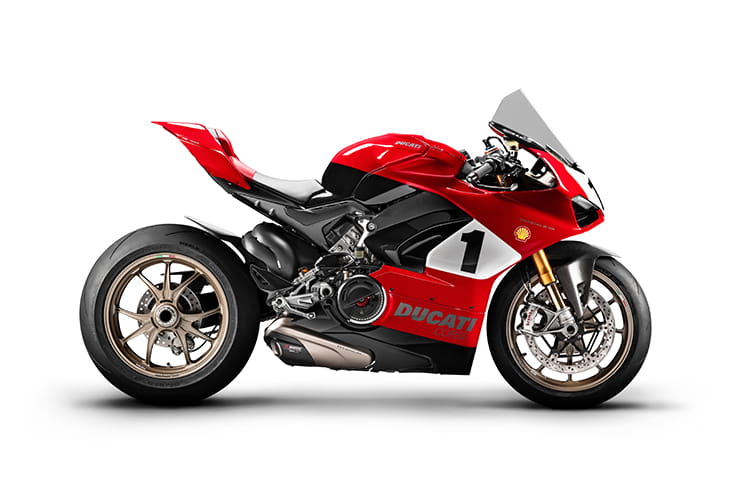 We may not be able to afford the new Superleggera but it’s some consolation that there’s still another mouth-watering limited edition Panigale V4 out there to tempt us – if you can find one, although we have seen a few still available new. Launched last year, it’s been built to mark the 25th anniversary of the world-beating Ducati 916. Based on the Panigale V4 S, just 500 have been made, each individually numbered with Carl Fogarty-inspired livery, forged Marchesini wheels, titanium Akrapovic exhaust and a host of other special carbon and billet aluminium goodie – as you’d expect for this price. 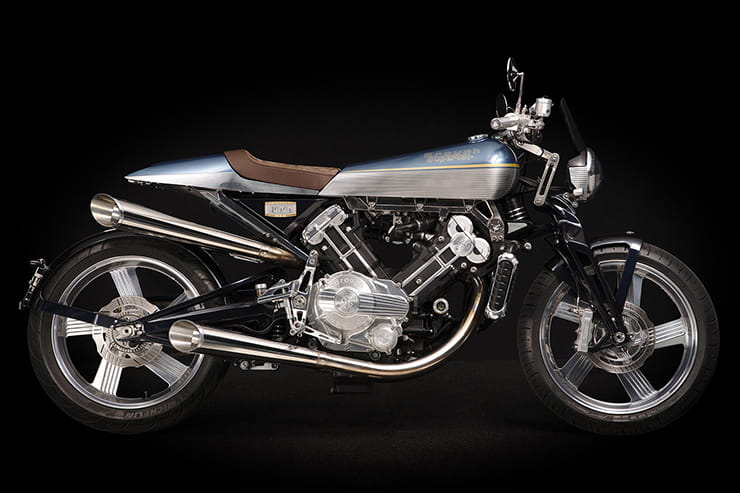 Legendary British marque Brough Superior originally traded between 1919 and 1940 becoming famous for building the ‘Rolls-Royce of motorcycles’, its SS100 V-twin, which today is regularly the most valuable of all classic motorcycles, repeated breaking record auction prices. In 2008 the rights to the brand were bought by Brit Mark Upham who then teamed up with Thierry Henriette of Boxer Bikes to create a modern reinterpretation, which went into production in 2016. It features a unique, liquid-cooled, 88-degree V-twin, novel Beringer brakes, a Fior fork using Ohlins shocks and its retro-inspired looks are all hand-fashioned out of aluminium, titanium and carbon-fibre. It’s a worthy machine, too, with 120bhp, modern dynamics, exquisite build quality and detailing and the kind of exclusivity only £60K+ can buy. The new Anniversary’ edition, meanwhile, was unveiled last year to mark the brand’s 1919 origins and features unique body panels, machined billet wheels, four slash-cut exhausts, new mudguards and more. Just 100 are expected to be built and sold this year making it one of the most exclusive (and exquisite) motorcycles you can buy. 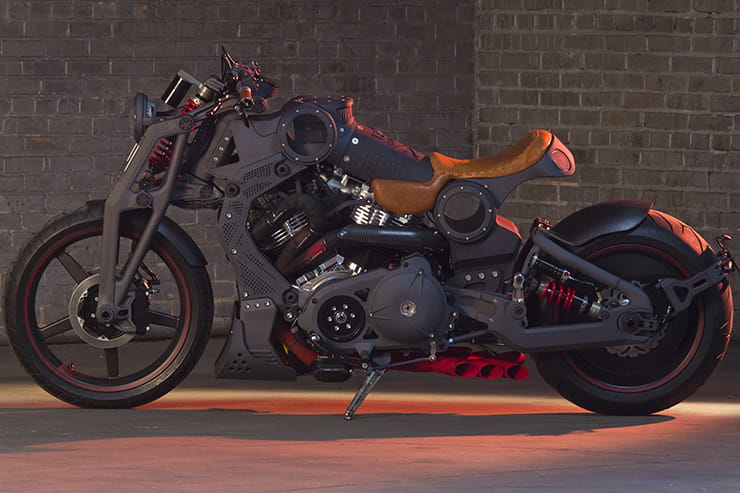 Exotic performance cruiser firm Confederate were founded in 1991 and quickly made a name for themselves with their blend of street cruiser style blended with high spec, performance chassis complete with girder-style forks and tuned S&S V-twins, all wrapped in hand crafted billet aluminium. And they’ve been so successful that, despite their lofty prices, they’ve become hugely desirable, especially among the rich and famous such as Hollywood A-lister and bike nut, Tom Cruise. For 2020 their line-up features the F-117 Fighter, a brutal performance cruiser powered by an S&S 117ci V-twin producing 140bhp, the P-51 Combat Fighter with 145bhp and a machined aluminium monocoque, both at $125,000 and the FA-13 Combat Bomber, an even more limited edition version of the P-51 finished in anodized grey with carbon wheels and more, all for $155,000 – or a whopping £118K. 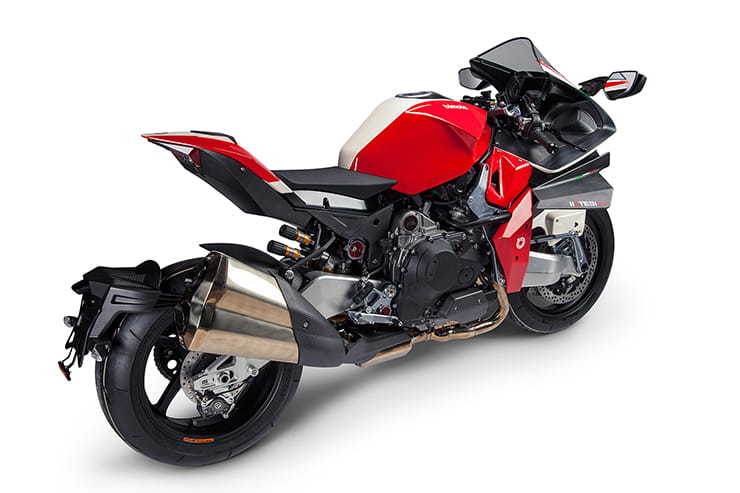 No, this isn’t the most expensive, but we’re leaving until last as, along with some others, and is common in this sometimes fantasy class, it’s not certain – yet – if it exists to buy, or, indeed, ever will be. The Bimota, being now part-owned by Kawasaki, is the most likely with this supercharged, hub-centre steered marriage of the Bimota Tesi and Kawasaki H2 expected in June, with a price expected at around £50K. But others with question marks still surrounding them are the similarly-supercharged Hesketh Valiant SC (at £50,000), the AMB001, a turbo-charged joint project between Brough Superior and Aston Martin with a projected price of €108,000 (but still only a concept and destined only for the track) and the aforementioned electric Arc Vector (£90,000, still a concept and Arc have now called in the receivers). Still, this category of bike more than any others should be about dreaming, right?