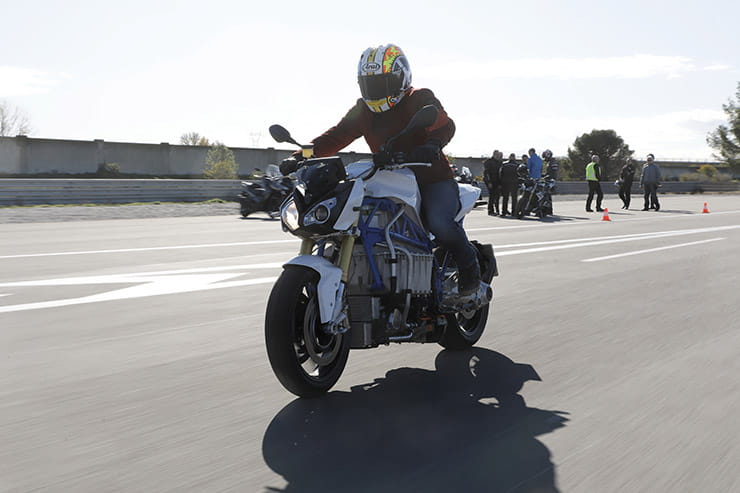 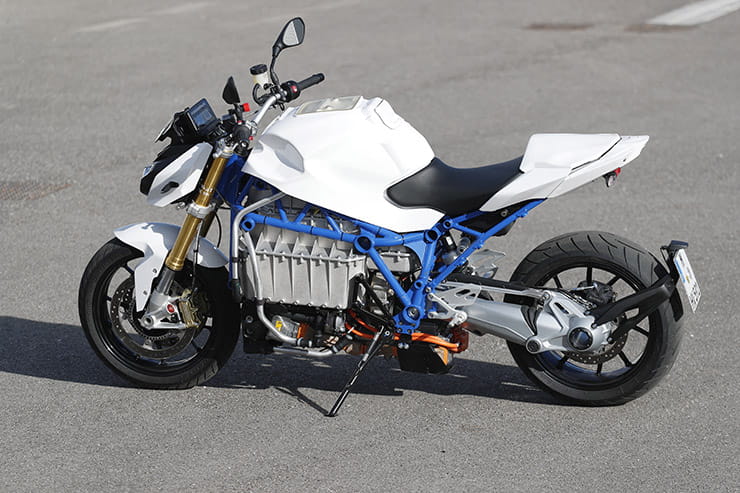 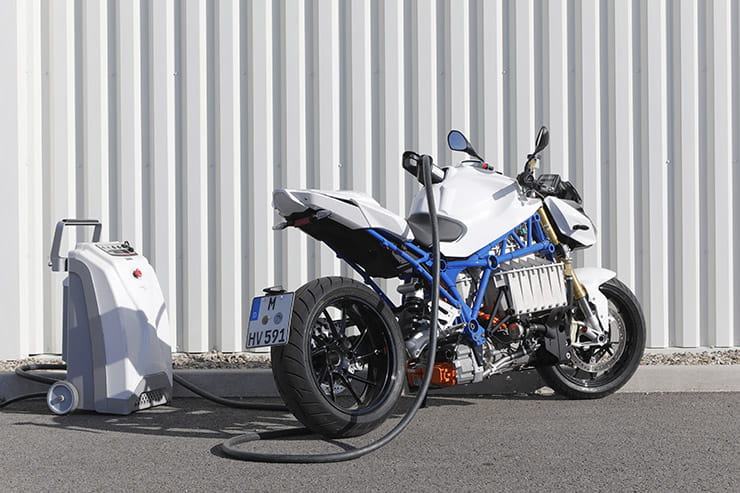 The dashboard I’m looking at is from BMW’s C Evolution Maxi-Scooter. The forks it’s mounted on come from an S1000R (with modified internals to take the extra weight), while the rear wheel and Paralever/swing-arm from the R1250R. Power comes from a battery borrowed from a hybrid version of BMW’s 5 Series saloon and the powertrain from a BMW 2 Series plugin hybrid.

It’s fair to say then, that this prototype electric roadster, attractive as it is, is a bit of a mongrel.

However, the end result provides 100kW of power, which translates to 136hp and an immense 200Nm of torque, or 147.5ftlb in old money - all of it pretty much instantly available. Everywhere you look, you see bits you recognise from other BMW products. Only the frame and a few key parts are unique. 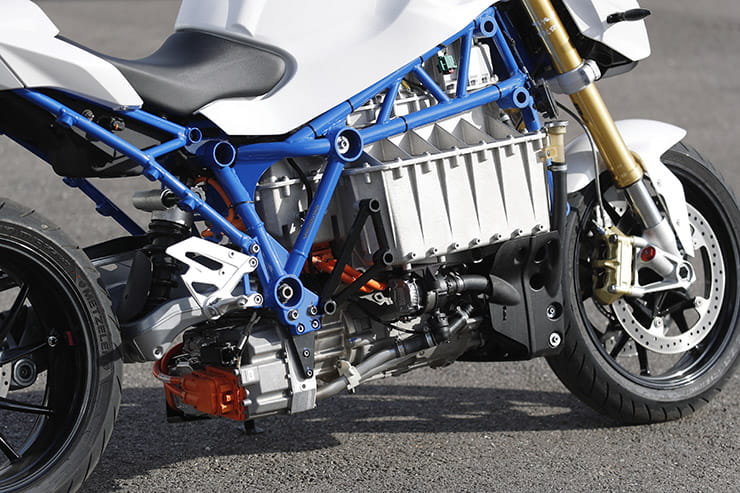 “One for the hardest parts of this project was getting all the relevant parts together,” explains Florian Traub, pre-development E-Mobility. “BMW is such a large company, and everyone had input, whether that be just a cable or a screw. Then it was down to just a small team here. Communication across BMW is good, we can talk freely to the car department, to use their knowledge, skill and vast data.”

That data and knowledge of E-power generation gives BMW an advantage over the competition. The BMW i3, a fully electric production car, was launched as far back as back in 2013. A small but dedicated team have been developing the eRoadster for two years. It’s still very much a prototype, weighing a hefty 290kg. “We are aiming to have the weight down to 250-260kg,” says Florian. “and range should be 200 to 300km depending on the riding.”

For an early prototype, the fast-charge time is already impressive: 6km range per minute of re-charge or, put another way, it only takes 30 minutes for an 80% re-charge. Currently, the prototype is capable of a 180km range after a 30-minute fast charge. 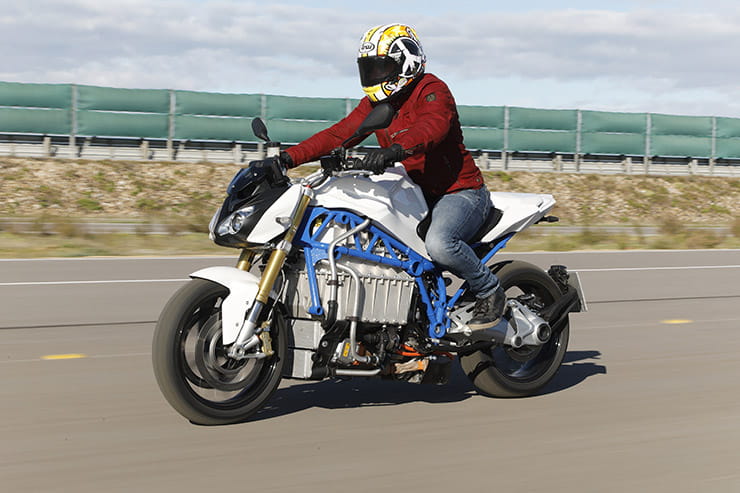 How does it go?

Turn the key and the dash comes alive - and that’s it - no noise, nothing. Pull the front brake lever, press the conventional starter button on the right bar and the bike becomes ‘active’ or ‘alive’. There's still no noise, but now the throttle is live and will react accordingly. If you’re not familiar with electric bikes, the strangeness continues. There are no gears and therefore no clutch. BMW has chosen to put the back brake where you’d normally find the clutch, on the left bar like a scooter. This may remain on production models, but for test purposes it was the easiest option. 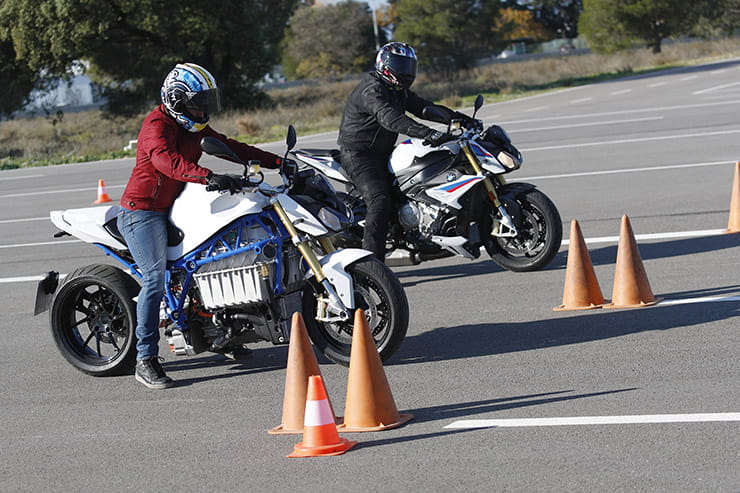 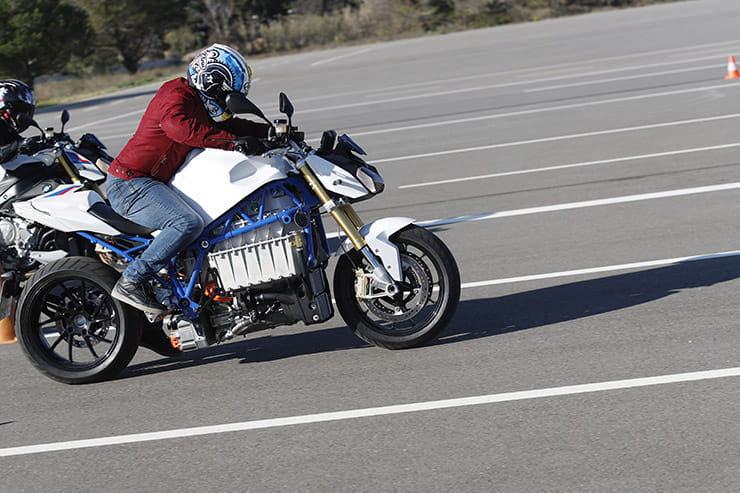 As we line up at the start, I can hear the S1000R in the next lane, revving impatiently. I’ve no idea whether I’ll be able to keep up with the 162bhp naked superbike. As the flag drops I make the perfect launch, no wheelspin or wheelies, and we’re away. I can hear screaming revs in the next lane, but he’s not in front or even in my peripheral vision. The eRoadster’s acceleration is rapid; fierce enough to push me back in the single race seat. I feel the rear shock squat and the forks extend, but there’s no traction control intervention, just an effortless tsunami of uninterrupted torque. Throttle back to the full stop, tucked in and weight forward. We’ve reached 100kph (67mph) in what feels like two seconds, and I have a sneaky peak to my left but the S1000R is still nowhere to be seen.

We're quickly running out of runway and I know from previous experience that stopping a 290kg electric bike, plus rider with no engine braking or gears, can be daunting task. As soon as I pop up from behind the small headlight cowl and apply the Brembo radial stoppers, the S1000R appears and does the same. Thankfully, the brakes are more than up for the challenge and bring the speed down to walking pace with ease. The dominant sound is pads gripping discs, which is a little disconcerting.

It’s an easy win (to 160kph). The eRoadster has beaten the 90kg-lighter S1000R – a small but significant victory for the electric bike. BMW research has shown that only around 20% of riders can launch an S1000RR perfectly – balancing clutch, throttle, gears. In comparison the eRoadster is relatively simple - anyone can twist and go.

On the return run, I get the opportunity to play with the throttle and handling. There’s no denying the eRoadster is heavy, but once on the move the weight, carried low in the chassis, feels drastically reduced. 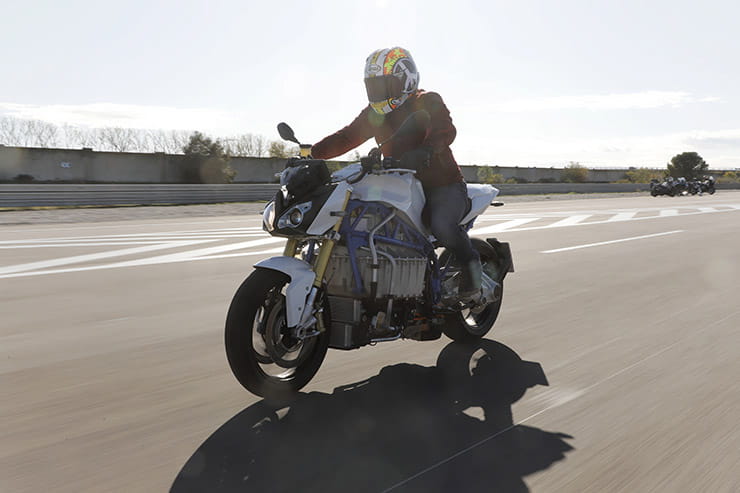 We should remember this is a prototype, using many (heavy) car parts and the weight will be reduced on the production bike. The throttle response is aggressive and at slow speeds, the power is strong enough to momentarily lift the front wheel before the traction control kicks in. It’ll be a lot of fun on the open road. I only got a small taste of what to expect in the future, but initial impressions are good, even more so when you consider the rapid recharge time.

I know die-hard petrol heads will be shaking their heads in disgust, but, make no mistake, electric bikes are coming, and the eRoadster suggests they’re going to be fast, thrilling and equally as exciting as their petrol engine counterparts. 100mph is just as thrilling on a motorbike whether it be electric or petrol, and the eRoadster's acceleration time should have the petrol heads worried.

And this is only the start, we are only scratching the surface. Where are we going to be in another 5-10 years? 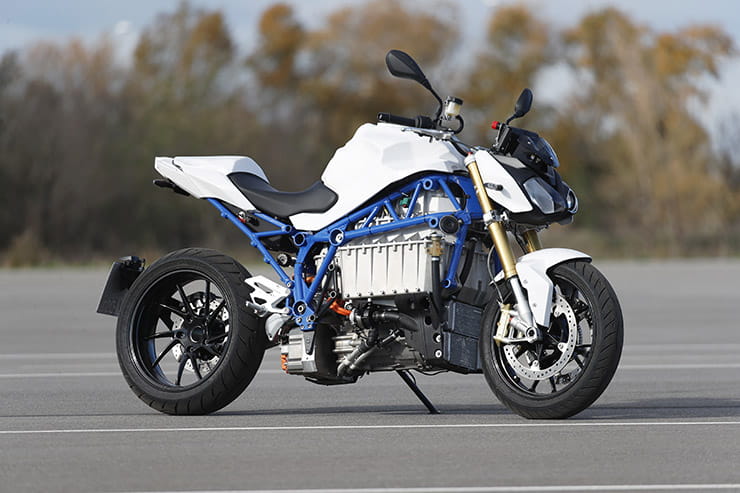