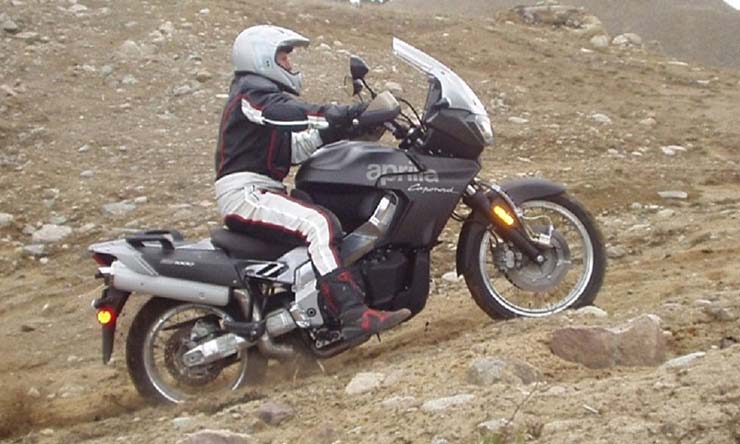 It’s been 25 years since the dawn of a project that – in slightly different circumstances – might have led to a very different type of motorcycle being in common use today. Back in the early Nineties, Swedish suspension specialists Öhlins were convinced that two-wheel-drive promised a motorcycling revolution and began work on a system that came closer than you might have thought to reaching mass-market production.

The firm’s technology eventually saw off-road racing success and even reached production in the short-lived Yamaha WR450F 2-Trac, but below that visible surface was a much larger project that envisioned bikes of all types, from scooters to superbikes, driven by both wheels.

The Öhlins two-wheel drive research project was green-lit for a feasibility study in 1992 and was to become a 15-year-long crusade to bring power to both ends of bikes, with dozens of prototypes made to experiment with the idea. Now, long after the project was shelved in 2007, we’ve got pictures of some of the most interesting ones.

In the context of the early Nineties, two-wheel drive made a lot of sense. At the time, four wheel drive was the technology du jour in cars. It was just a decade since Audi’s Quattro first brought all-wheel drive to mainstream attention, dominating the World Rally Championship, and manufacturers all over the world were engineering all-wheel drive systems to fit everything from sub-1000cc minicars like the Subaru Justy to supercars like the Bugatti EB110. It was an engineering advance that was also proving to be a massive marketing tool, so it’s little surprise that several bike firms started looking at the idea.

But putting power to the front wheel of a bike isn’t straightforward. Öhlins wasn’t the first to attempt it – in fact you’d been able to buy a two-wheel drive Rokon Ranger since the Sixties – but finding a way to drive a wheel that steers, without compromising the suspension or adding too much weight or bulk, was key to making the concept a success.

Systems using shafts, chains or a combination of the two have been made to work, but Öhlins’ suspension experience meant it was more familiar than most with the potential of hydraulics. Forcing an uncompressible fluid, like oil, down flexible tubes from an engine-driven pump to a small, hub-mounted hydraulic motor was appealing as it meant a system could be engineered that would fit conventional bikes without redesigning their suspension or transmissions. That’s exactly what Öhlins did.

Two wheel drive on the road

Although Öhlins had been working on the technology throughout the Nineties, it wasn’t until 2000 that the firm turned its attention to the possibilities that the system presented to road bikes.

It was in late 2001 that grainy pictures first emerged of a Yamaha R1 fitted with the Öhlins two wheel drive set-up, but in fact that wasn’t the very first attempt at translating the technology to the Tarmac.

A year earlier, in 2000, Öhlins built a prototype (pictured) – internally named ‘Goofy’ – that must be one of the most prescient machines ever created. It combined the chassis and engine of an R1 with high, wide bars and TDM850-style bodywork. The result was a superbike-powered machine with a riding position and styling that these days would be put on the road-going edge of the ‘adventure’ class, just like BMW’s S1000XR.

And just like the S1000XR and a host of other modern, high-powered, adventure-styled bikes that are really intended for on-road use, it took on that style to emphasise its abilities as an all-weather all-rounder that could harness a sports bike’s power and let normal riders exploit it on real-world roads.

The R1 that followed was a testbed to see whether the system could provide benefits on the track, too. 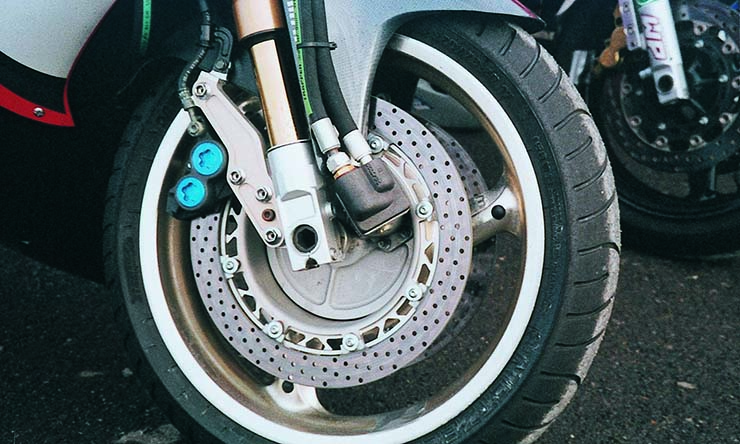 The results of these tests were conclusive and favourable. As you’d expect, the two-wheel drive road bikes offered better traction – particularly in the wet – when compared to their one-wheel-drive brethren. The two-wheel drive system also made them more predictable on corner entry and allowed them to hold a tighter line, as well as letting riders get on the throttle sooner.

If that wasn’t conclusive enough, a side-effect of the system was that as speeds rose a greater proportion of the torque went to the front wheel, aiding straight-line stability at high speed and particularly in the wet.

On higher-powered bikes like the R1 prototype, the rear wheel remained the dominant one, since the hydraulic pump and motor were limited to a maximum power of around 25kW, but testing still showed improved stability, and the fact that the front wheel was driven had a side-effect of making wheelies more controllable and easier to land.

The R1 was by no means Öhlins’ last road-oriented two-wheel drive prototype. Despite being largely owned by Yamaha at the time, the next was a KTM LC4 supermoto, which in 2003 allowed the firm to test the system’s behaviour when sliding on asphalt.

The following year, a second-generation two-wheel drive superbike was created. Again, the firm opted not to use a Yamaha but to try to the set-up on a Ducati 998. Finally, in 2005, an Aprilia Caponord was fitted with the same set-up – perhaps giving the best clue as to the likely way the system might have been used today given the exponential growth of the adventure bike market in the last decade. Unfortunately, that bike coincided with the tailing-off of the project.

While there was no denying the impressive results of the system– the prototype sports bikes using the system were claimed to lap significantly faster than their conventional counterparts, particularly in the wet – the system wasn’t without flaws.

Firstly, some power was lost to the system’s additional internal friction. While that might have reduced a bike’s performance in some situations, Öhlins reckoned that the prototypes’ ability to put their power down better than a conventional bike more than made up for it.

The system could also create increased steering forces, giving an unnatural feel, and could make the forks ‘lock up’ on occasion. This was something that Öhlins intended to address with a second-generation system that was under development in the mid-2000s when the project started to wind down. It added a control valve that effectively turned the front wheel’s drive on or off depending on whether it was needed. As with four-wheel-drive systems on many modern cars, this automated ‘on demand’ set-up could have addressed issues with fuel consumption, drag and ‘feel’ without losing the benefit of a driven front wheel when it was needed.

The firm also had plans to develop a system capable of transmitting more power to the front wheel, which would have been particularly useful on high-performance machines, and was working on a cheaper design that might have been useful on scooters and low-powered bikes. The project ended before these ideas came to fruition.

None of these issues were, in themselves, terminal flaws. Problems that were harder to solve included the additional cost that the hydraulic drive added. The system may have been relatively simple but it required precision manufacturing that was expensive to achieve. Honda later had a similar issue with its short-lived DN-01 (remember that?) which used a clever variable-speed hydraulic drive to power the rear wheel instead of a shaft, belt or chain. It worked, but was hard to make and led to high costs.

Other concerns worth noting include the fact that to make the most of two-wheel drive, bikes, tyre manufacturers would need to be on-side to develop tyres to maximise the system’s potential.

However, perhaps the biggest problem faced by the Öhlins set-up was its timing. In the Nineties when development started, splitting drive between the front and rear wheels appeared to be the best way to maximise a bike’s ability to use the ever-growing amount of power that was on offer. A decade later, electronic traction control was on the rise and we’d started to see a revolution in tyre technology. When the project started, riding gods struggled to tame 180bhp GP bikes on slick tyres and few road going machines offered as much as 130bhp. Now you can buy road-going machines with 200bhp that even an amateur can happily ride on the street thanks to incredible tyres and electronics. A precision-engineered drive system will always add more weight and cost than the handful of sensors and microchips needed for traction control, and its advantage was fast being eroded to nearly nothing.

Would the Öhlins system, with another decade of development under its belt, make a convincing case for itself today? It’s impossible to know, but the fact that 2016’s MotoGP bikes have been sprouting wings to help keep the front wheel on the ground, and wheel spin is barely an issue, suggests that the system’s niche – at least in terms of on-tarmac machines – might have largely disappeared thanks to improvements in technology elsewhere. 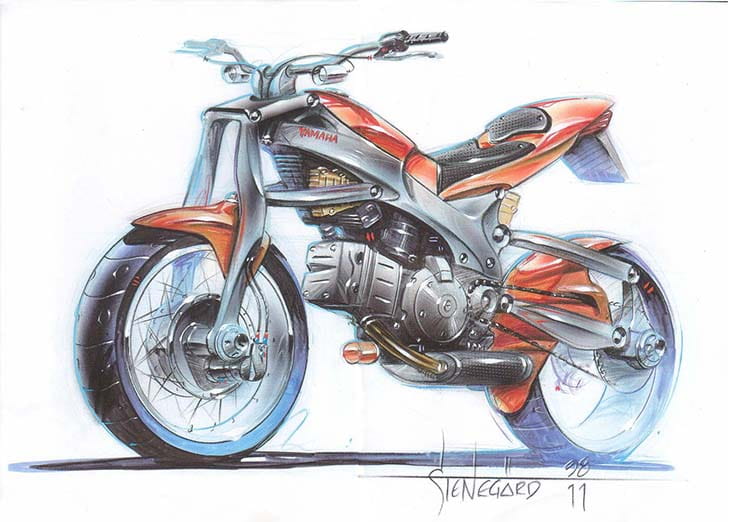 At the end of the day, Öhlins took the development of its system as far as possible by the time it was mothballed in 2007. The two-wheel drive prototypes have been scattered to the winds – most were made for their manufacturers and were returned to them, with the exception of one of the R1s, which remains in Öhlins’ hands.

If you want to try the Öhlins system for yourself, you’ll have to search out one of the tiny number of Yamaha WR450F 2-Trac machines that were offered in 2004 and 2005. Only 445 were made, though, so prepare for a long search.

Öhlins might not be working on two-wheel drive anymore but the idea still pops up on occasion. American firm Christini builds a purely mechanical, shaft-and-chain two-wheel system for motocross, enduro and supermoto bikes that can be retro-fitted as a kit and has proved moderately successful.

But it’s the coming revolution in electric power that could finally trigger a mass movement towards powering both wheels. Lightweight in-hub motors and that fact that you only need a couple of wires to feed them rather than precision hydraulics or complex shafts could make it easy to add two wheel drive to virtually any bike.

German firm Wunderlich revealed a prototype two-wheel drive BMW R1200 GS in late 2015 using such an electric drive system for its front wheel (pictured), and KTM has also filed patents for something similar. Yamaha – one of the key players in the Öhlins project – has also seen the possibilities. It showed an electric two-wheel drive sports bike concept in the form of its PES2, a 2015 concept bike that’s intended to mutate into production in the near future. Even the military has an interest, with work underway on an electric two-wheel drive enduro for US Commandos.

Want an all-wheel drive bike right now? As well as the Christini option, there’s the New Zealand-made Ubco 2x2, an electric utility bike that powers both wheels, while Rokon – maker of two-wheel drive bikes since the Sixties – will still sell you one, having recently added front suspension for the first time.