BMW Showdown: Kiyonari v. M Dunlop - we ride them both! 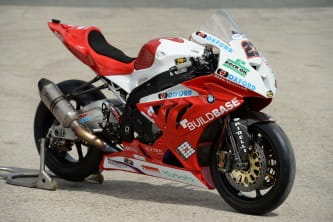 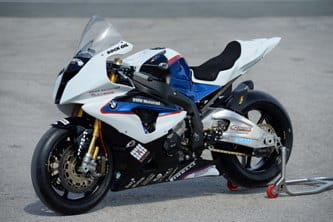 It takes quite a lot to beat blasting round the Jerez grand prix circuit on the S1000RR that Ryuichi Kiyonari has recently been winning races on in BSB. So it really was pinch-yourself time to be riding into the pit lane on Kiyo’s red-and-white Buildbase BMW, and heading out ten minutes later on the blue-and-white machine that Michael Dunlop rode to those two historic TT victories in June.

Dream stuff for us journos, and it’s not surprising that BMW is making the most of its so-far successful racing season by lining up a bit of publicity. After all, it’s barely a year since all was doom and gloom after the German firm had announced it was quitting World Superbikes, without having won a world title despite several seasons of expensive effort.

Kiyo’s impressive late-season form — which could yet result in BMW’s first ever BSB title — and especially Michael’s historic TT wins, the factory’s first on the Island for 75 years, have justified that decision to abandon WSBK in favour of supporting a wider cast of S1000RR-racing teams via the BMW Motorrad Race Trophy, which awards points for results in numerous series worldwide. 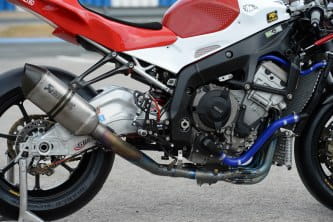 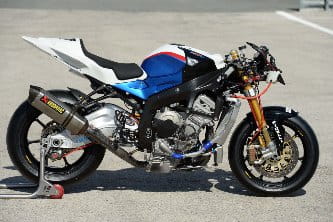 The new set-up has certainly benefitted Hawk Racing. The Leicestershire based team run by Stuart Hicken and his son Steve is responsible for preparing both Dunlop and Kiyo’s S1000RRs, although the bikes’ liveries are different because the BSB machine is part of the Buildbase backed team, while the TT bike was factory supported and run with BMW colours.

The two Brit-built bikes were the stars of a Jerez test day that also included spins on several other S1000RRs, including German ace Markus Reiterberger’s race-winner from the German IDM Superbike championship, and the BMW Italy bike on which Leon Camier and Sylvain Barrier have been front runners in WSBK’s EVO class. 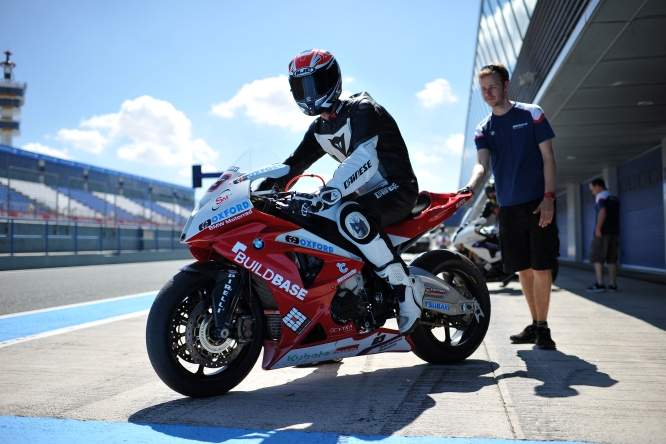 The other S1000RRs, including even the standard road bike that we warmed up on, all had traction control so it was a bit sobering to throw a leg over the Kiyo bike’s seat and see a “No TC” warning written in magic marker on the top yoke. BSB rules prohibit traction control so I’d be relying on brain and right wrist for this one…

There’d be plenty of horsepower to control, too. The standard S1000RR is hardly shabby, and although tuning is also limited by BSB regs (which means standard pistons and valves, and spec ECU), engine builder Stuart Hicken finds a bit more. Alpha cams and some head porting combine with the Akrapovic pipe to increase max output to 208bhp, compared to the Superstock spec motor’s 195bhp.

Thankfully one of Buildbase bike’s strengths is a superbly sweet connection between throttle and rear wheel, which Kiyo has used to great effect of late, and which even this ageing ex-racer could appreciate at Jerez. Whether the BMW was storming onto the back straight at almost 100mph or cranking out of the following hairpin in first gear shortly afterwards, it responded with a brilliantly precise feel that made it very controllable. 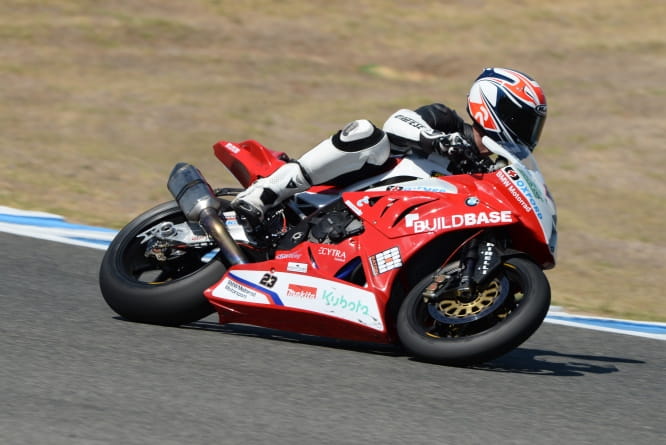 It was plenty fast, too, tonking down the straights at a fearsome rate before the four-piston Accossato calipers bit hard. Kiyo is a fair bit smaller than me so I was also pleasantly surprised to find the BMW handling very well; squatting and running slightly wide out of some turns because its Bitubo shock was a bit soft for my weight, but generally feeling superbly taut and planted.

These days it’s a rarity to ride a bike of such performance and quality with so little in the way of electronic aids. And the fact that it was so easy just to jump on it and ride it hard confirms that the S1000RR in general, and this red-and-white rocket in particular, are supremely well sorted. Whether Kiyo can keep his run going and add to the three BSB titles he’s already won on Hondas remains to be seen, but he and this bike are serious contenders. 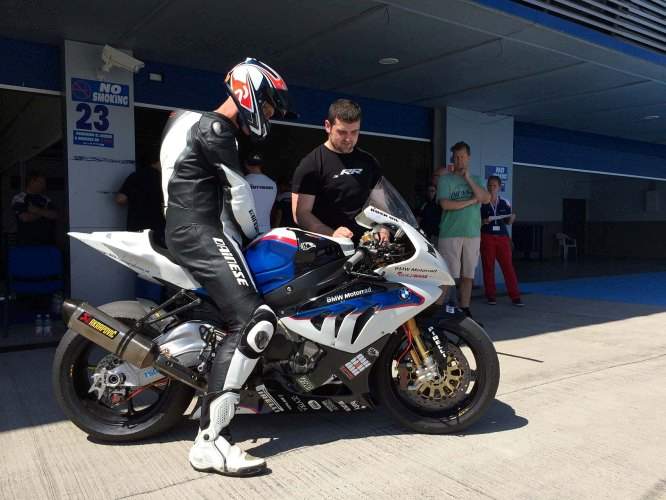 It was only a few months ago that Michael Dunlop was facing a similar question of whether he could follow success on a Fireblade by doing something similar on an S1000RR. He answered that one in emphatic style, matching his 2013 TT haul with four more wins, three on BMWs: the Superstock race, plus the Superbike and Senior on this blue-and-white brute.

Much was made of the factory tie-up, but although the motor did come from Munich and was built to World Superbike spec, it was essentially a unit that any race team could have bought. Albeit one that includes hot cams, short-skirt pistons, titanium rods, balanced crank, and produces 222bhp at 14,300rpm. And the bike itself was built by Hawk around a standard S1000RR streetbike.

The big issues with this bike concerned its crucial cycle parts, with the Hawk team fitting their familiar Bitubo and Metzeler bits before being persuaded by Michael, shortly before the TT Superbike race, to run the Ohlins units and Dunlop rubber that he was more familiar with. We’ll never know whether he’d have achieved his historic victories on the original kit; what we can safely say is that the Hawk crew made the right call to let him use the stuff that gave him most confidence. 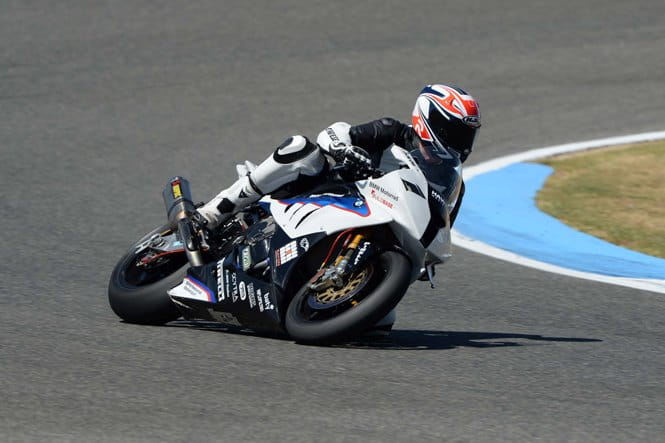 They also did a great job of keeping the bike reliable throughout the fortnight, helped by a focus on strength rather than ultra-light weight. This bike uses steel bolts instead of titanium ones like the BSB machine, and a big rad to keep the temperature down, along with copious lockwire and thread-lock. It even has a standard steel rear subframe instead of an aluminium one like Kiyo’s bike, and a glass-fibre fairing instead of a lighter, more expensive carbon job.

That all means that Steve Hicken estimates its weight at 180kg, a hefty 15kg over the BSB bike which is right on the class limit of 165kg. With the big, 24-litre tank brimmed it must have felt quite heavy setting off down the Glencrutchery Road, but it seemed plenty light to me as I headed onto the near empty Jerez track.

The BMW handled as well as you’d expect, too, staying superbly stable however hard I wound on the power or hauled on the four-pot radial Brembos into the turns. The Ohlins-suspended front end felt predictably planted, too, and could doubtless have coped effortlessly with more force than I was putting through the front Pirelli slick that the bike was wearing for the day.

And blimey, is this bike fast! The power delivery is a bit more top-endy than the BSB bike’s, as might be expected given that it’s making an extra 14bhp. Its acceleration out of the slower bends was mind-blowing, especially the way it tried to wheelie all through the box despite my efforts to pull my weight forward and keep treading through the reverse-pattern, quick-shift enabled box.

It was fantastic fun to aim the brute down the Jerez back straight, and tuck down behind the tall screen as the BMW motored towards a top speed that would be getting on for 200mph with its regular rider on board on the Sulby straight or the run down to Creg-ny-Baa. It certainly seemed mighty rapid on the Spanish circuit’s wide open spaces, so what it must have seemed like when blasting between the houses at Kirk Michael or the banks and hedges at Barregarrow doesn’t bear thinking about.

All too soon my brief blast was over, but the BMW was soon back out with the next rider on board. Its days of being ridden in anger are numbered, though. From Jerez it was heading off on the European show circuit (including the NEC) before, most likely, a well deserved retirement in BMW’s Munich museum.

By contrast the red-and-white Buildbase bike is facing the most important few weeks of its year, starting with the next BSB round at Assen and ending with the traditional Brands Hatch finale that could see Kiyo giving BMW that first BSB title to go with the TT trophies. The German firm’s World Superbike challenge is over, at least for the time being, but the S1000RR is just getting into its stride. 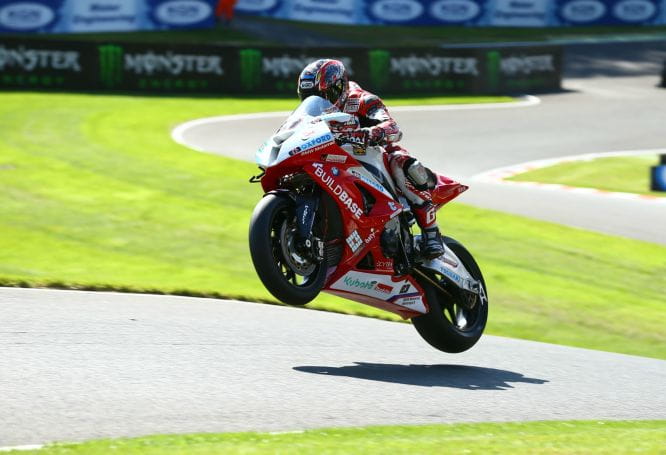 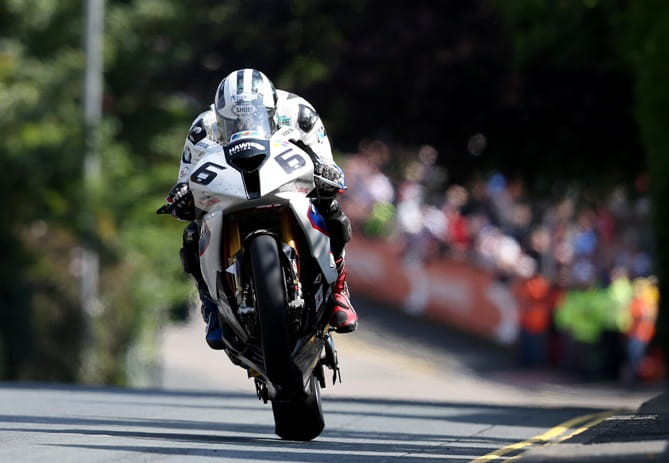