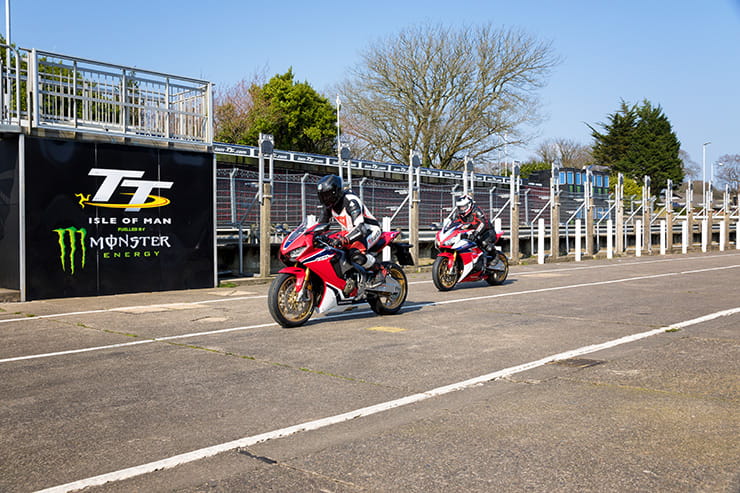 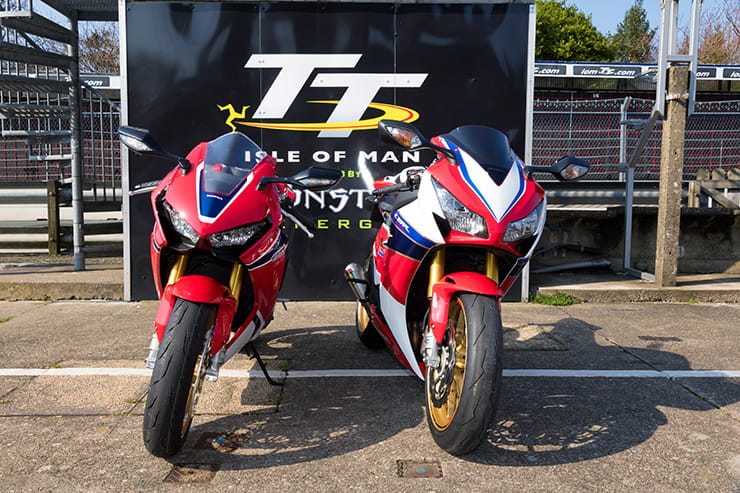 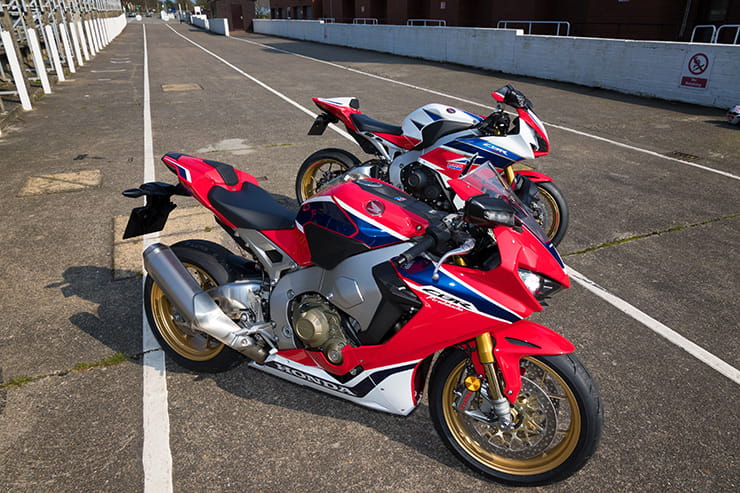 This week I was fortunate enough to take delivery of a brand new long-term loan bike from Honda. Nope, not a CB1100 or a Rebel but the most beautiful CBR1000RR Fireblade of them all, ever; the 2017 version of the SP.

The new line-up of Fireblades mark the 25th anniversary edition of the most famous sports bike so we took the SP to the Isle of Man to become the first to lap the TT Mountain Course on it and ask Head of Motorcycles for Honda UK, Nick Campolucci, about what makes the new version so special.

In 1992 Honda launched a bike that was a true game changer, the CBR900RR. It had 600cc proportions with an in-line four making 122bhp.

Developed by Tadao Baba and his team, the revolutionary concept was to beat Honda’s own RVF750 on track by being the lightest and most compact bike in its class. Developed initially as a 750, displacement of the in-line four was increased to 893cc while retaining 600-class proportions of a 1405mm wheelbase and 185kg dry weight. The result? EXUP and GSX-R11-annihilating acceleration and handling. Today, first generation ‘Blades are appreciating classics.

Fast forward 25 years and, unless you've been hiding under a rock for the last 6 months, you'll know that the Japanese manufacturer has released its 11th version of the iconic Fireblade.

And not just one version either. There's a standard and less track-focussed bike known simply as the CBR1000RR Fireblade (£15,225), an SP model (£19,125) with higher spec semi-active Ohlins suspension, better brakes, a quickshifter with autoblipper and even more technology. And coming soon, a homologation special, limited edition SP2 with Marchesini wheels and engine revisions to the cylinder head, valves, combustion chambers and pistons.

Taking the new SP and the 2016 SP TT-edition for a lap of the 37.7-mile Isle of Man TT circuit and the difference between the two bikes is instantly understood – like using a Nokia 3310 and then switching to an iPhone. The older machine has a mechanical thoroughness to it, a feeling you get when you get a little nostalgic. Clunkier, harder, noisier (the Akrapovic fitted as standard on the TT special edition certainly helped) and heavier with no technology to really speak of, certainly nothing that would compare to the most recent generation of litre sports bikes and their mass of rider controls. That said, the older SP’s clocks are still far superior to the new ZX-10’s…speaking of old Nokias! No traction control and no anti-wheelie, for instance, gives the purist an older school and more ‘real’ ride. The power delivery on the cable throttle (the new bike has fly-by-wire) is more aggressive and the power doesn’t hit you until you’re well through the rev range. 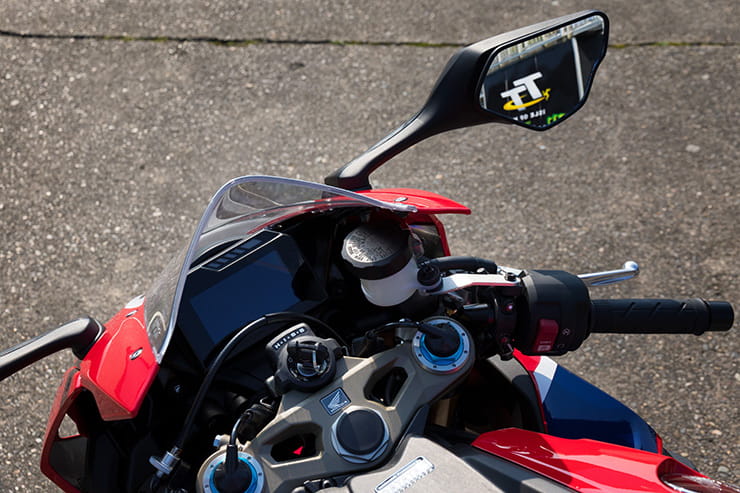 Switching from the old to new bike got me all giddy. Dimensionally it’s tighter, more compact and feels like a modern-day track-focussed thoroughbred. Standing side-by-side in pit lane, the new physical size between the two SPs is easy to spot. Narrower fairings with a lower screen and a smaller fuel tank all aid the new Honda’s slim line appearance. It’s also so much lighter, 15kg so about the same as 5-year old child and that has been Honda’s stock answer when questioned why it doesn’t make 200bhp like its main rivals. The weight advantage the new bike has is supposed to give it the edge in the transition to and from maximum lean into a corner. Manoeuvring the bike around the Glen Helen section from Ballacraine to Sarah’s Cottage (7-9 miles into the Mountain Circuit) and the ability and stability the 2017 SP offers if first class. Just like the 600-proportions of the original CBR900RR, the new bike is so easy to flick around thanks to its short wheelbase and light steering allowing the bike to change direction fast and accurately. This is also ably supported by its mega high spec electronics package, the A3 setting of the semi-active Ohlins suspension is the most ideal for everyday road use whereas A1 is far more suited to the track.

11 more horses over the old model give the new ‘blade a bit more bite especially lower in the revs. A new fly-by-wire throttle makes the acceleration far smoother and faster and if you think it’s quick to 6-6.5,000rpm wait until all hell breaks loose after that marker. Like a turbo-engined car of the 80s, the afterburners kick in and the new ‘blade comes into its own. Subtle, smooth but oh so powerful and rewarding if the throttle is pinned and the revs are allowed to soar.

Couple that with the new-fangled quickshifter as it pops faster than you can blink up through the ‘box, then back down again with its autoblipper doing the clutch lever out of a job. It’s as close as I’ll come to competing at the TT.

The controls for the "class leading electronics package" are laid out courtesy of the sparkly new full colour TFT display which is a synch to read and operate via Honda’s very obvious yet slightly unfashionable switchgear. There plenty of options with both pre-set and rider specific engine power modes (x5), traction control (x9), brake assist (x3) and Ohlins suspension settings.

I’ll be reviewing the SP on a number of occasions throughout the year with updates of modifications and trips plus there’s a very special lap of the TT course with 23-time winner, John McGuinness, coming soon where we find out what his five most important parts of the Mountain Course…then go and visit them.

That’ll be followed up by a test of the Fireblade SP on road and track against the 2017 Suzuki GSX-R1000R and Kawasaki’s special ZX-10RR Performance edition. 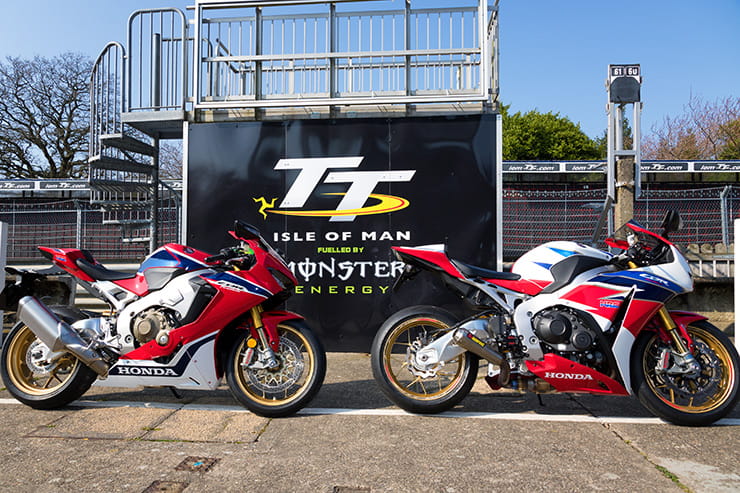