When it comes to enjoying the performance and handling of a sports bike the track, rather than the road, is part of the reason why track days are more popular than ever.

Organized and provided by various track day specialists such as No Limits or MSV and with dates at not just most UK tracks such as Donington and Cadwell Park but also overseas, a track day gives you the opportunity to ride your bike to the max on thrilling circuits we normally otherwise only see on TV. All abilities are catered for (as long as you’ve a full or race licence), usually by having three different groups ranging from novices to experts and, as long as your gear (ACU Gold helmet, one or two-piece leathers, gloves and boots, plus, ideally, back protector) and bike (within noise limits and with either removed or taped up mirrors, lights and speedo) are up to scratch (literally) a full day of fun – and riding education – awaits.

But what bike should you ride? And there, for many, is the rub. In the first place, there’s nothing to stop you riding your road bike to the circuit and, with a bit of tape, using that. Although then, of course, you run the risk that, if the worst happens and you have a spill, it might be too damaged to carry you home.

Alternatively you, or better still, you and a mate, could hire or borrow a van and take your bikes that way. Then you also have the opportunity to prepare your bike for the track in advance.

While a third option is bike hire. Some track day companies offer this with the like of a fully-prepped CBR500R up to a Yamaha R1 available from £200 to £350.

But if you fancy being a regular track day-er the best and possibly cheapest option is a ready-prepped track day bike. That way you’ve a dedicated machine you’re both familiar with and can tune to your preference and all without risking your road machine. If you go down this route, we’d recommend buying a second-hand track or race bike that’s already prepared with race bodywork, lights removed, track pipe, tyres and so on. Generally these are both cheaper and avoid much work being required. As for which bikes, on a budget, are the ones to go for, here’s our pick of the 10 cheapest track day machines, in price ascending order… 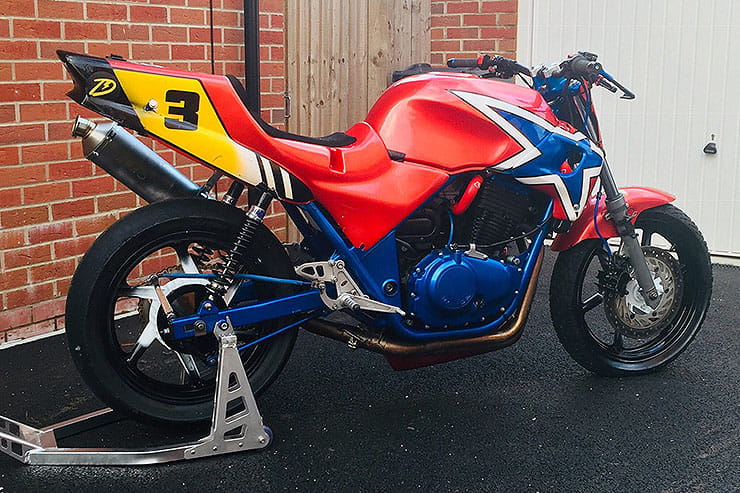 It’s easy to mock Honda’s now aging little commuter twin, but that ignores the fact that, in the late ’90s and early Noughties, thanks mostly to the Honda-supported CB500 Cup, the little twin was the first major step into racing for the likes of James Toseland and James Ellison. As a result of that series there’s still plenty of serviceable track examples still to be had at bargain money and it remains a perfect introduction into track riding thanks to its unintimidating performance, surprisingly adept handling and robust, reliable, Honda build quality. Although ‘just’ 57bhp stock, you can expect a touch more from tuned, pipe-equipped track versions which is more than enough to make life entertaining. While most track prepped versions are also like to have a single race seat, uprated Hagon rear shocks, race exhaust, racing brake lines and rear sets. And, if they don’t, it’s so easy to work on, you can easily add much of that as you go along. As an affordable, toe into the water of track riding, the CB500 might not be sexy, but it’s as good as they get. 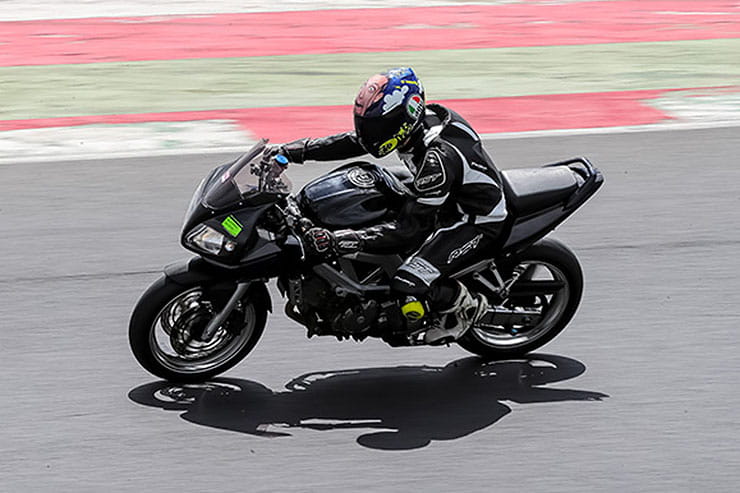 Hugely popular as a first big bike, Suzuki’s evergreen middleweight V-twin has also proved a hugely popular first track bike due to its combination of sporty manners, great value and availability due to the continued success of ‘minitwin’ racing. Light and unintimidating to ride it also offers intuitive, confidence-inspiring handling and, with 70bhp even in stock trim, it’s reasonably brisk and pretty bulletproof even when having its nuts revved off.

Having been raced for over 15 years since its introduction in 1999 means that companies like JHS Racing stock plenty of performance parts and most track-prepared versions will likely have a performance pipe, GSX-R fairing, solo race seat, rear sets, uprated suspension and more – all the stuff you want on a track bike, in fact. But, obviously, the higher the spec, the higher the likely price. Bog basic examples can be found for just over £1000 but an all-singing Minitwins racer can be £3K-plus. You pays your money you takes your choice… 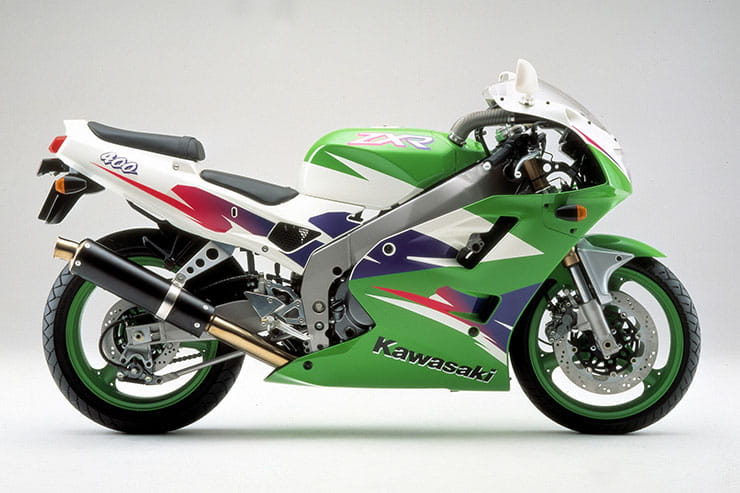 Back in the early ‘90s nothing delivered accessible sports bike thrills better on road or track than the then hugely popular supersports 400 class – as popularized by the glut of affordable ‘grey imports’ of such machines from Japan where they fitted into a special licence category. Machines like Honda’s ‘Mini RC30’ NC30, Yamaha’s ‘junior OW01’ FZR400RR and many more delivered screaming four-cylinder thrills, unintimidating pure sports chassis and junior superbike looks for a whole generation. Admittedly, most of the increasingly rare survivors are either thrashed, crashed or now collectors' items in their own right, but Kawasaki’s offering, the ZXR400, is not only more readily available than most thanks to being an official import for many years, it's also more rugged and affordable. So, if a ‘junior ZXR750’ appeals complete with joyous steering and handling and a screaming 60bhp four-cylinder motor, there are few better introductions to the track. A decent, track prepared one should set you back less than £1500 and, though aging, can still offer tons of track fun. 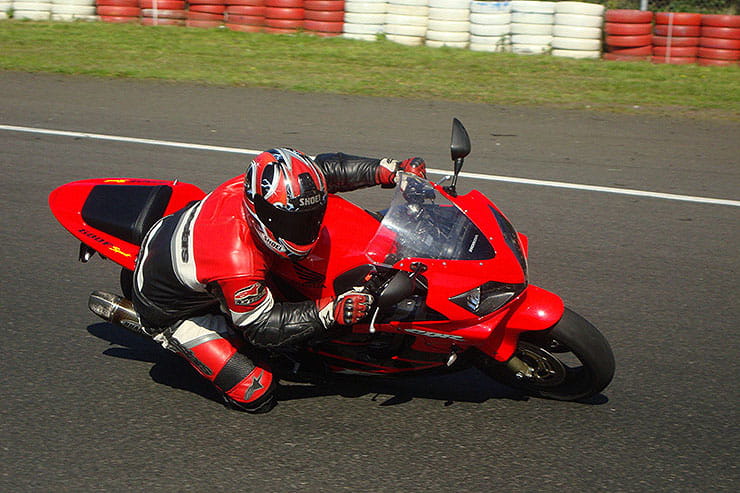 Of all the pre-racer replica supersports 600s, that is the more all-rounder 600s before the 1999 R6 and later Honda CBR-RR changed the class forever, Honda’s last generation, alloy-framed CB600F from 1999 to 2006 is probably the best. With a lightweight, twin spar alloy chassis, uprated, adjustable suspension, fatter tyres, uprated brakes and a decent 110bhp, the FX and FY versions in 1999 and 2000 were not just brilliant all-rounders but decently sporty. While, in 2001 until 2006, the restyled F and sportier FS versions got fuel injection, while the Sport got a sporty seat, more tunable engine and even sportier suspension. As a track bike it has a lot to offer plus typical Honda durability. Get a fully-prepped track version and it will have more than enough performance for most and proper four-cylinder rev-ability and thrills, yet all for an affordable price. 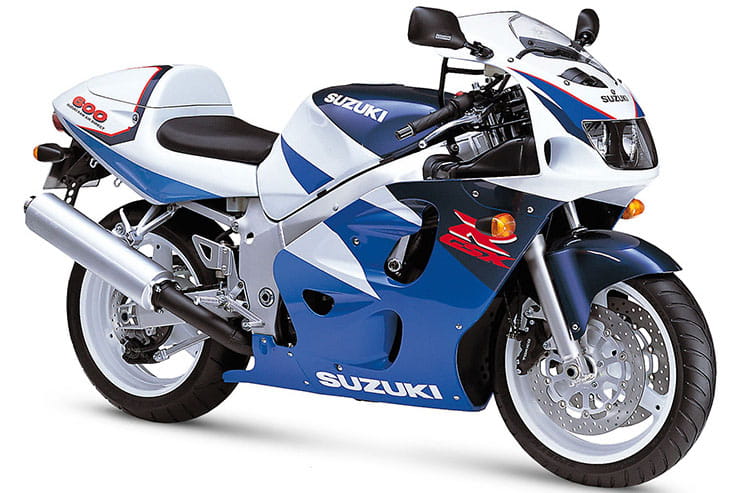 When it comes to the more ‘racer replica’ generation of supersport 600s as associated mostly with Yamaha’s class-changing R6 from 1999, Suzuki’s first stab at the breed, the first GSX-R600 ‘SRAD’ from 1996 is not only one of the most over-looked, but also one of the best on track AND most affordable.

Inspired, along with its more familiar 750 brother, by Suzuki’s then RGV500 GP bike and distinguished by its twin spar aluminium frame – Suzuki’s first – high-revving, 92bhp four-cylinder engine and distinctive racer bodywork complete with bulbous seat unit, the junior GSX-R may never have been a great supersport all-rounder but it was brilliant on track, winning the world supersport championship in 1998 in famous Corona yellow and purple colours. Quickly superceded and more brittle and less well-equipped than some rivals it’s nevertheless a great handler, a good introduction to four-cylinder track sports bikes and often great value, too. 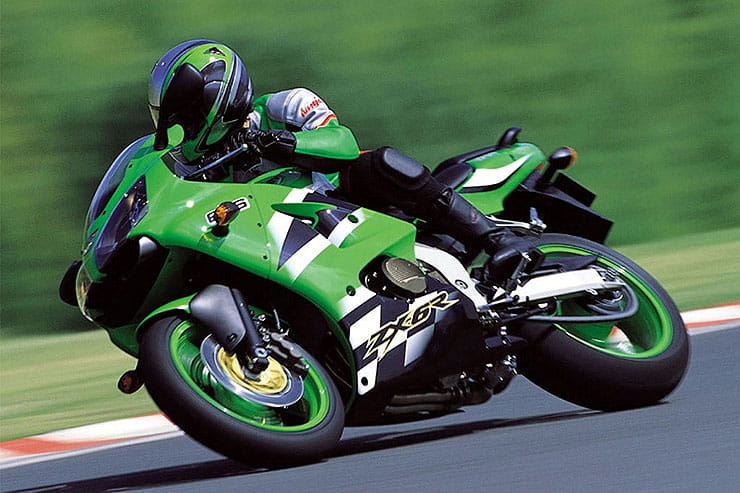 Kawasaki’s racy supersports offering, the ZX-6R, has been around since the mid-Noughties in a huge variety of forms and remains in production up to this day. The earliest ‘F’ series from 1995 to 1997 was a serious rival to Honda’s then CBR600F while the succeeding G and H from 1998 and 1999, with its 106bhp and 14,000rpm redline raised the bar further still. But the all-new J, with a beefier 636cc engine, improved suspension and swing arm and face lifted looks was good enough to give the R6 a run for its money, is a good road bike yet is an affordable blast on track as well. The later, smaller, lighter, faster B and C models are more tempting still, but can cost significantly more. But a decent J1 or J2, although a little big and soft compared to some, can still deliver plenty of track thrills for as little as £1500. 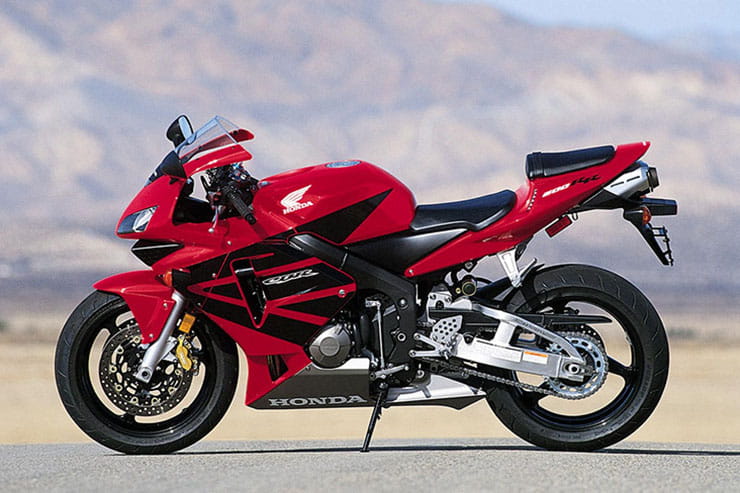 Honda, having persevered with its more all-rounder 600F up to 2003, were relative latecomers to the full-on, racer-replica, R6 and GSX-R-rivalling supersports, but when the CBR600RR finally arrived in 2003 it more than proved to have been worth the wait. With compact proportions, MotoGP styling, 115bhp, decent cycle parts and Honda’s famed quality and durability it was pretty much a match for the then R6 and, better still, has worn even better as a used track buy. Sure, it might not have quite the sharpness or sheer power of the later R6, but the RR ably sits in the middle ground between older, cruder 600s and the Yamaha in terms of ride ability, performance and price. 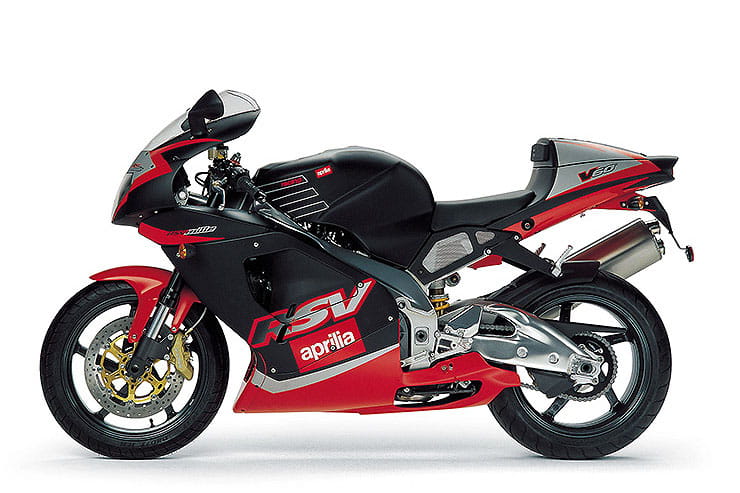 As we’re focusing on the more affordable track bike options here we’ve naturally concentrated on middleweights but if you absolutely must have a litre bike as your track weapon of choice you still get the most bang for your buck with Aprilia’s gorgeous, and still underrated, first generation RSV1000 Mille. The Italian V-twin was conceived to out-gun Ducati’s 996/998 and, for the most part, it actually succeeded despite rarely receiving the recognition it deserved. The 60-degree Rotax V-twin gave 110bhp at the back wheel, its twin spar frame was exquisite, it was easy to ride and roomy for larger riders and the higher spec R and Factory versions were gloriously equipped with the likes of Brembo brakes, Ohlins suspension, forged wheels and more. It’s durable and reliable, too. But best of all, they’re still ridiculously undervalued today. £2500 will buy a decent road Mille, a little more for an R, and under £3K for a very usable track version. Find a good one and you won’t go wrong. 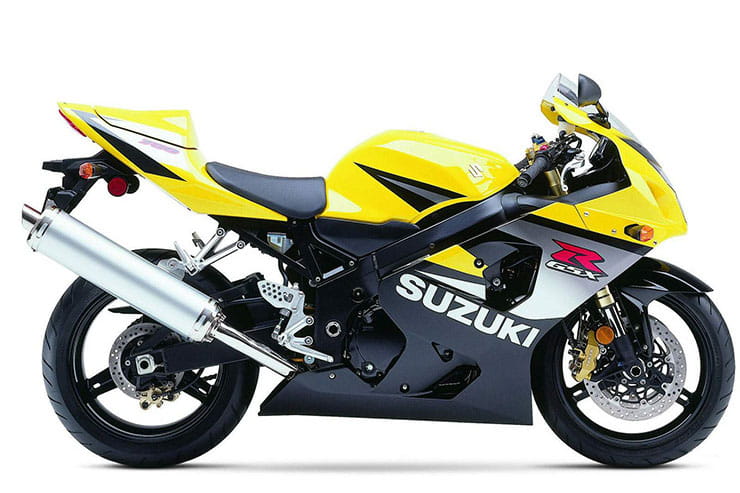 Suzuki’s brilliant three-quarter litre sportster has been revered ever since the revolutionary 1985 original and while the 750 superbike class has long been superceded by 1000cc machines the Suzuki has continued to appeal for its unique blend of near-1000cc performance with near-600 class handling and manageability. Nowhere is that more true than on the track and, with 750 racing options now limited, there are plenty of older ‘Gixxer 750’ track machines still available at seriously tempting prices. Yes, you can go with an older SRAD or early K for less money still, but we’d recommend the brilliant 2004-5 K4/5 for its almost peerless blend of power (145bhp), intuitive handling and quality which now, in track form, can be had for as little at £3K. Find a good one and, in the right hands on the right track, there’s still not much better today. 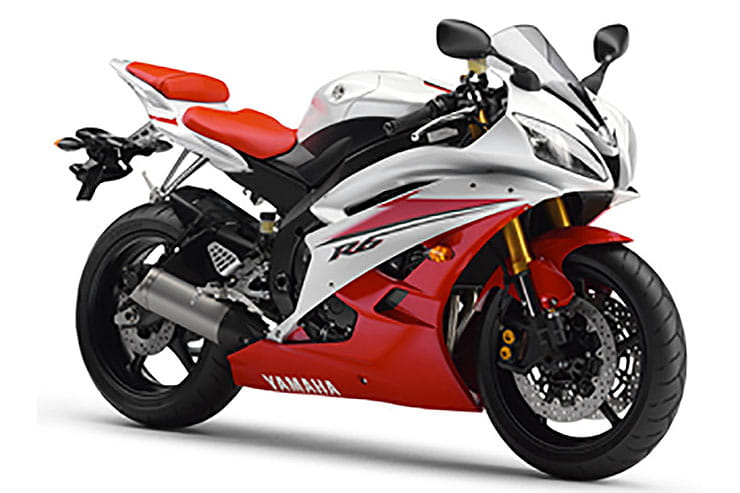 While the original 1999 R6 revolutionised the supersport 600 class and remains a great, budget track bike for under £3000, it’s the later, post 2006 version we’re focusing on here – if your budget can stretch to it. Introducing ride-by-wire and packed with not just high tech but 131 screaming horsepower and an ultra-nimble chassis, this version of Yamaha’s 600 was the benchmark 600 track bike for over a decade thanks to dynamics that were simply a class above. That sheer popularity also means there are tons of track examples available, sometimes now for under £4K which can make it a steal if you shop wisely. Find a decent one at the right price and you’ll have a track weapon that’s the match of almost anything and with masses of expertise and go-faster goodies available, too.