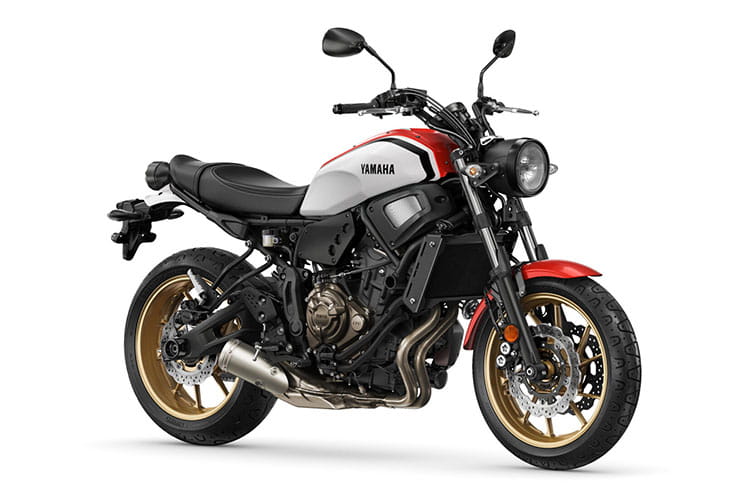 It’s fair to say that retro roadsters, or modern, straightforward, upright bikes with the styling and spirit of classic bikes from the ‘60s and ‘70s, is one of the most exciting, dynamic and popular classes of machine of all.

BMW kick-started the whole trend with its first R nineT in 2014 – a bike based on the then R1200R roadster but with retro styling touches designed to commemorate the 90th anniversary of the German firm’s original boxer, the 1924 R32. The huge success of that bike – it was originally conceived as a limited edition but quickly went into mainstream production – spawned both a whole family of R nineT variants and a host of imitators from rival manufacturers.

But even BMW weren’t the first. Britain’s Triumph has been successfully producing, in a variety of forms again, its own reinvented Bonneville since 2000. Moto Guzzi’s Bonneville rival, the V7, has become the backbone of the Italian legend’s range since its introduction in 2008; while Ducati’s offering, its retro-inspired, novice-friendly Scrambler family, first introduced in 800cc form in 2015 has, like BM’s R nineT, blossomed into a whole family of machines. Even the conservative Japanese have now jumped on the retro bandwagon with bikes ranging from Honda’s glorious CB1100 to Yamaha’s funky and fun XSRs and Kawasaki’s latest, its delectable ‘70s throwback, the Z900RS.

But with this ever-growing choice what should you go for and why? To help you choose, here’s our pick of 10 of the best – in ascending price order… 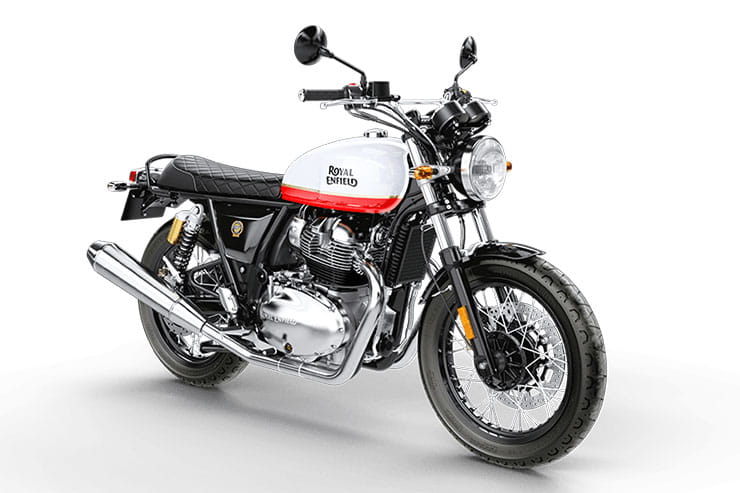 The all-new engine is willing, thrummy and A2-compliant, the handling is sweet and easy. Build and equipment is adequate rather than inspiring, but the look is great, the experience easy and evocative and the value, thanks to being built in India, incontestable. For this look and badge, nothing at this price comes close, no wonder both have proved big hits.

Yamaha’s two XSRs are the retro-restyled versions of its popular and perky MT-07/MT-09 modular roadsters. The 847cc, 115bhp, three-cylinder MT-09 came first in 2013 and proved an instant hit for its combination of fun and value, with the twin cylinder, 74bhp, 689cc MT-07 version coming a year later and becoming a Europe-wide best-seller ever since. But if they could be criticised for anything it was for their slightly basic spec and oddball looks. Enter the XSRs in 2016. Both got retro-inspired restyles (although they’re still quirky rather than conventional) with different lights, alloy tank, seat and even ‘retro’ Pirelli Phantom tyres, yet will all the same perky practicality as before. Suspension on the 700 isn’t the best but it’s still great value, lively, practical and now, good looking as well. The 900, meanwhile, is £9699. 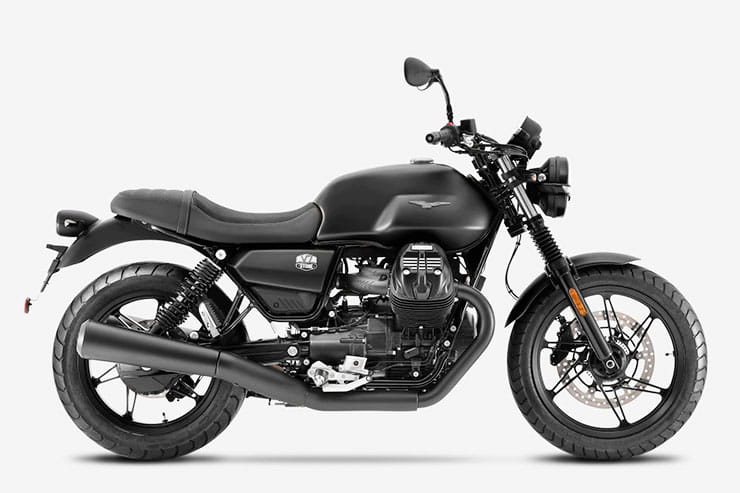 The V7 is to Italy what Triumph’s Bonnie is to Britain – yet with arguably even more authenticity. A similarly styled and proportioned roadster, the V7 was introduced in ‘Classic’ form in 2007 and gone on through various evolutions since to become the historic Italian marque’s bedrock and one of its biggest success stories. It’s been updated again, like many others, for 2021, primarily to comply with the new Euro5 regulations, with the biggest change being the new 850cc engine from the V850TT adventure bike, which is also usefully more powerful, now putting out a claimed 65bhp. But there are changes elsewhere, too including new instruments, seat, and a subtle styling revision.

Three models are now available: the base, entry-level, blacked-out Stone, from £8000; the uprated, more chrome-laden Special (pictured), with twin clocks and more convincing retro styling from £8600 and the limited-edition Stone Centenario, to marks Guzzi’s 2021 centenary, from £8200. No longer underpowered compared to the 900 Bonneville it offers a lot of charm and authenticity at an even more tempting price. 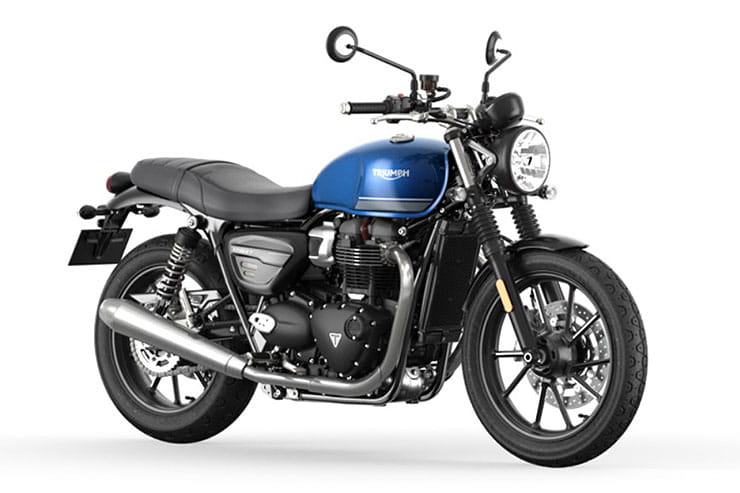 British marque Triumph has been class-leaders when it comes to retro roadster, ever since it reinvented its Bonneville way back in 2001. The classically-styled but easy-going twin has been a best-seller ever since, has been repeatedly updated – most significantly in 2016 – and all have received a major refresh for 2021 – including the entry-level, most affordable Street Twin.

Based around the smaller, easier-going 900cc version of the Bonneville engine, this unit has not been revised to meet Euro5 but also gets a useful 10bhp power boost taking peak power from 54 to 64bhp while other engine changes, including a lighter clutch, help reduce the T100’s overall weight by 4kg. It also gets an uprated Brembo brake caliper and front forks, refreshed instruments, new cast wheels, a more comfortable, 10mm thicker bench seat and revised bodywork and detailing including side panels with mesh detailing. As an affordable, authentic, and still quality entry into retro roadsters, they don’t get much better. 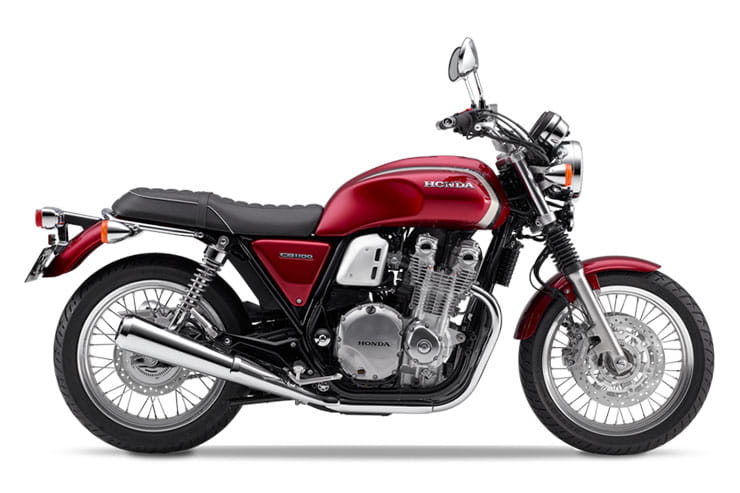 Unique among the retro roadster breed, the big CB1100 is also typically Honda in being a clean-sheet, technological tour de force – in this case an air-cooled transverse four, something Honda hadn’t built for 30 years and one that is a huge achievement. It took even Honda a while to get it right, though. First seen as a concept bike in 2009, then an Australasia/Japan special it finally came to UK in 2013. Although its engine, in particular, was admired, that version was also considered a little bland with niggly details such as a too-small tank. Other revisions followed and finally, for 2017, with new tank, revised intake/exhaust (for a more characterful delivery) plus a new, sportier and’80s-styled RS sister model (at £200 more), it’s now classy, authentic and uber-cool. Still a little soft and no powerhouse, and likely to not be around due to Euro5 after current stocks sell out, the CB is also cultured and satisfying. 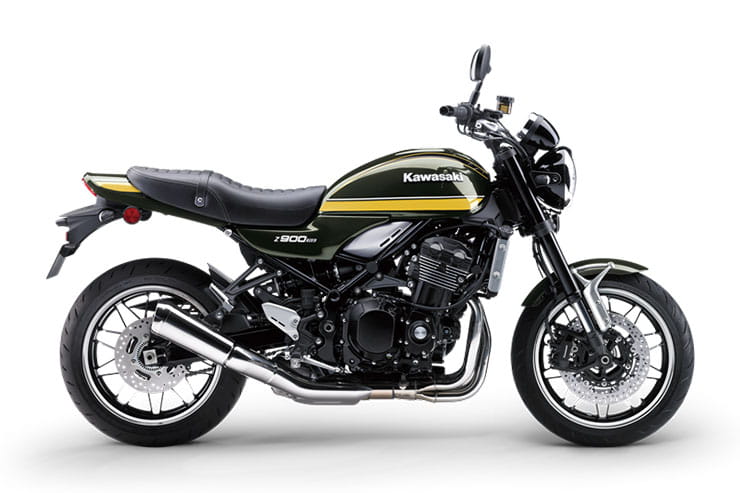 An impressive hit due to its combination of mouth-watering, Z1-inspired styling – right down to its twin clocks, clever alloy wheels (which remind of wires) and ‘70s brown/orange livery – on top of already potent, 110bhp Z900 running gear, the RS is one of the best Japanese retros yet. Its Z900 chassis and liquid-cooled four means it’s a decent performer and there are enough sweet styling touches to satisfy. The only downside? Annoyingly, the Z1-alike green or brown colours cost £300 more. 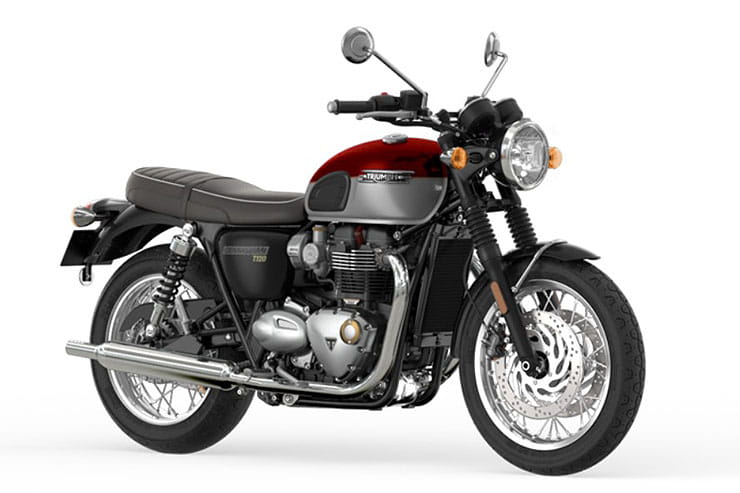 Revived British icon Triumph know more than most about producing successful retro roadsters having introduced its first modern Bonneville way back in 2000 (although the retro styled but modern engineered 900 Thunderbird goes back even further to 1995), so it’s no wonder the latest T100 (900cc) and T120 (1200cc) Bonnevilles, which have just been improved again for 2021, are pretty much the definitive examples of the breed. In short, if you want a pleasing roadster with modern mechanicals and classic ‘50s/’60s British twin style, the Bonnevilles have it all: idiot-proof manners; pleasing performance; great styling and detailing (these are no ‘dressed up’ bikes like the SV/XSR/Z900, but have dedicated engines, chassis and more) and, best of all, the right tank badge. Although the £10,800, 1200cc, 79bhp T120 is undoubtedly the better bike and ‘more’ in every way, but the T100 900 has a lot going for it, too, has just received a 10bhp power boost, so offering enough performance for most, but costs £1700 less. 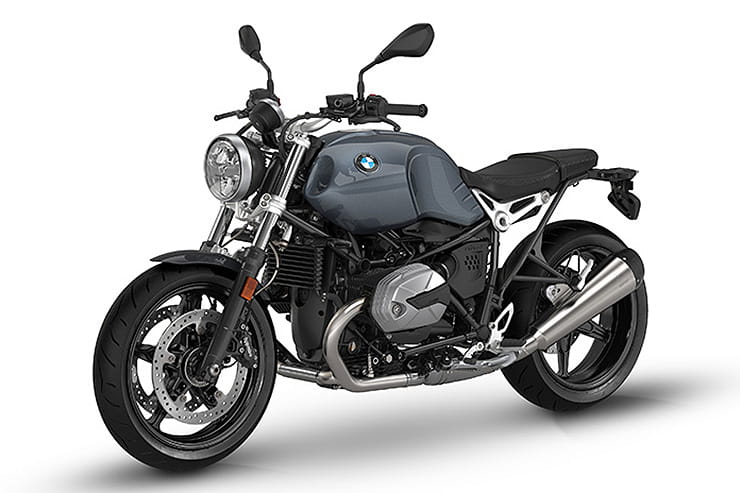 Triumph’s Bonneville aside, BM’s R nineT retro roadster, first introduced in 2014 as a short-run anniversary special, is arguably the bike that most fuelled the growth of the retro roadster category. Basically, a modern R1200R roadster (which uses the older, oil-cooled, 110bhp version of BM’s boxer 1200 powertrain) but with retro-inspired styling touches that pay homage to great BMW boxers of yore, that bike proved such a hit for its blend of modern manners, 120mph performance and classy, heritage style, that it spawned a whole family of spin-offs and rivals. The ‘Pure’ was added in 2018 as the most affordable, bare bones variant (thanks to cast not wire wheels, steel (not ali) tank plus more basic suspension) while other current versions include the original, high spec R nineT, R nineT Scrambler and R nineT Urban G/S. All have been updated for Euro5 and are classy, versatile all-rounders with just the right level of retro style. But the Pure is the best value of all. 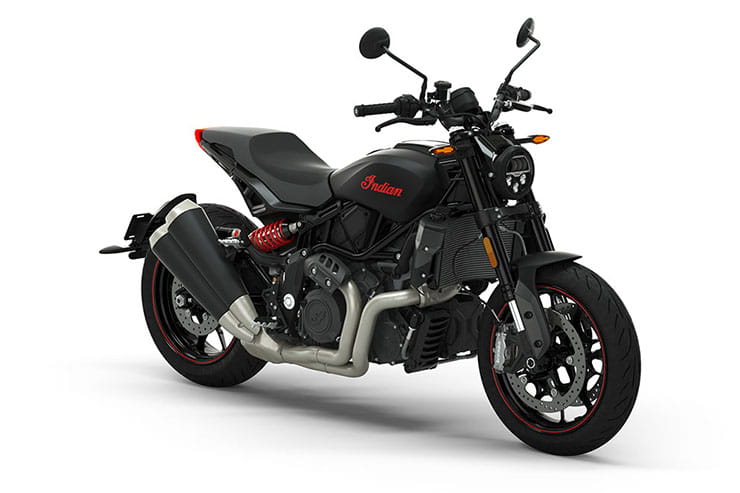 Upstart American manufacturer and great Harley rival Indian have come up with some great bikes since its relaunch in 2014, but one of the greatest – and biggest surprises, to boot – was its flat-track styled, retro roadster, the FTR1200, in 2019. Based on a tuned version of the 1200cc Scout V-twin, it produced a lively 118bhp and its flat-track-style chassis was both a great-looking, different take on the retro theme yet also handled well and was hugely entertaining. Think of it as an American Ducati Monster and you won’t be far wrong. It even came in three different versions – the standard bike, a semi-off-road ‘Rally, higher spec ‘S’ with extra electronics and cosmetic touches and a top-of-the-range Carbon with fancy suspension, bodywork and more. In fact, the only thing wrong with any of them was slightly odd wheel sizes, 19in front and 18in rear, which limited tyre choice. That’s now been remedied for 2021 (it now has 17inchers front and rear) making it certainly one of the best performing – and quirkily different looking – retro roadsters of all. 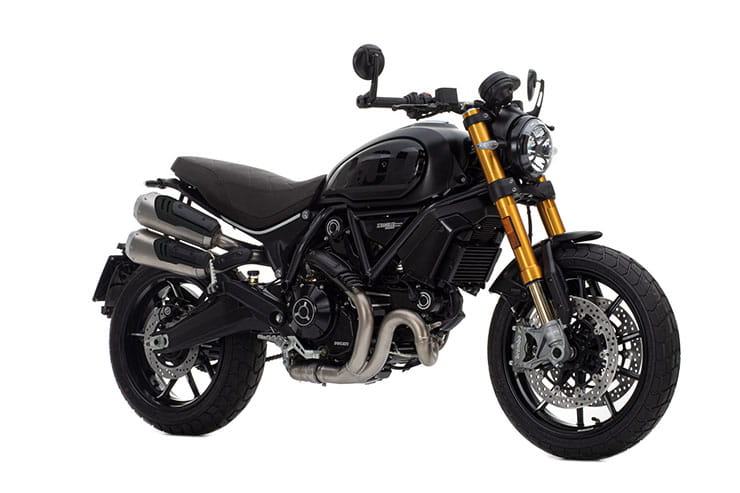 The Italian legend’s ‘Scrambler’ sub-brand of retro-styled, novice-friendly V-twins have proved a huge success ever since the first four 800cc models were introduced in 2015. An A2 licence compliant 400cc version came in 2016, while some other stylized versions followed, although all were considered slightly tame. But its 1100cc models, first introduced in 2018, brought slightly larger proportions, decently meaty 86bhp performance and more – yet all with the pleasing retro Scrambler style. The latest versions have been revised again with an improved rear end, Euro5 compliance, new exhaust and more and comprise the 1100 Pro, 1100 Dark Pro and top-of-the-range 1100 Sport Pro featuring quality Öhlins suspension, an aggressive riding position and decent electronics including three riding modes. It’s a brilliant handler, has lots of Ducati retro kudos and is good fun, but its 85bhp is a little bit lacking considering the hefty price.

Fancy a used retro roadster? Here’s our five of the best:

Most practical of pioneering Sport Classics is now in demand

Revived, burly, air-cooled four is truly from another era