Last month we bought you the Top 10 superstars who rode Triumphs; a collection of stars from stage and screen from the 60's to the 90's. This time it's the turn of the modern day celebrity and their dedication to the British motorcycle brand. 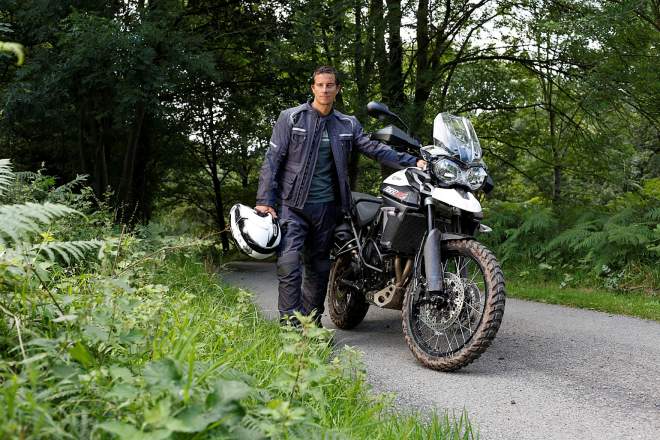 When a bike journo turns up to a press launch to ride a new motorcycle, you usually don’t expect to be faced with a hardcore survivalist of the likes of Bear Grylls. But that’s exactly what happened earlier this year at Triumph’s launch of its updated Tiger 800s. ‘Bear’, or Edward Michael to his parents, is best known as an adventurer, writer and TV presenter, but is also a genuine biker, having had 125s, 1200s and, most recently (before Triumph) a Suzuki VStrom 650. ““I started riding when I was 16 and I was immediately hooked,” he said. 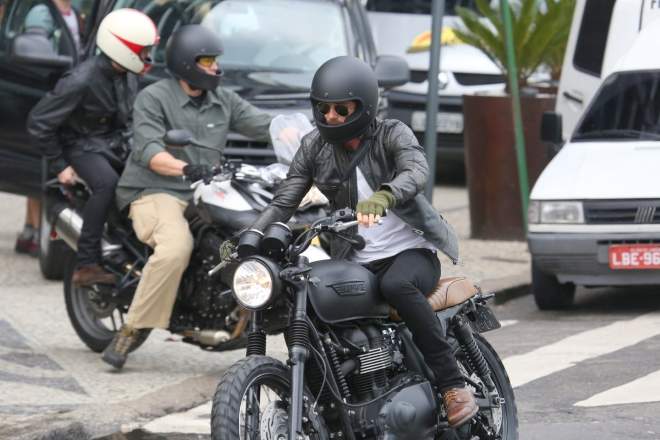 Although well-known as a biker, ex-England footie captain Becks has been more usually seen on a variety of chopped Harleys. For his 2014 BBC documentary ‘Into the Unknown’, however, he and three mates used specially modified T100 Bonnevilles for an adventure into the interior of Brazil to coincide with the world cup. Interestingly, they couldn’t go for the Scrambler version as that bike was then not homologated for Brazil. Instead, the T100s got different bars and seats, high 2:1 exhausts, Metzeler Karoo tyres, chopped mudguards and were slathered in matt black paint. 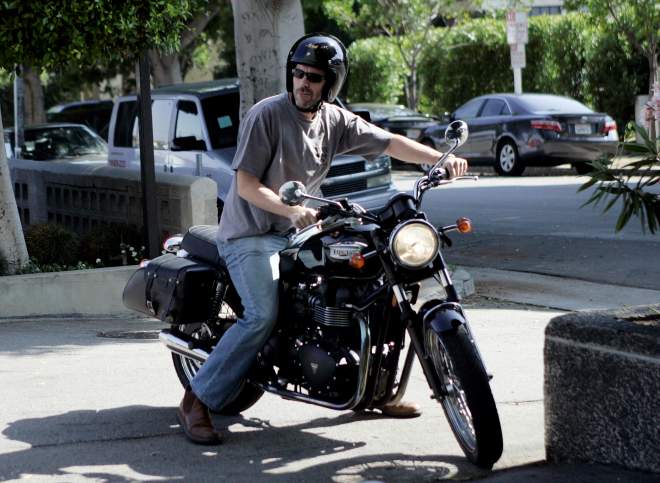 Perhaps most famous in Britain for his appearances on Blackadder and Fry and Laurie, the Brit has come a long way since his debut alongside the Not the Nine O’Clock News team, most recently starring in UK medical drama House, and as such becoming (for a while) the highest paid TV actor in the world. He’s also a long time bike, nut, however, and a fan particularly of the Hinckley Bonneville (although he’s also been seen on a Yamaha XJR1300 and Honda CBR600RR), aboard which he has regularly been seen driving around LA. Incidentally, Laurie was first on screen on a Triumph, aboard a Thunderbird in 2000’s ‘Maybe Baby’. 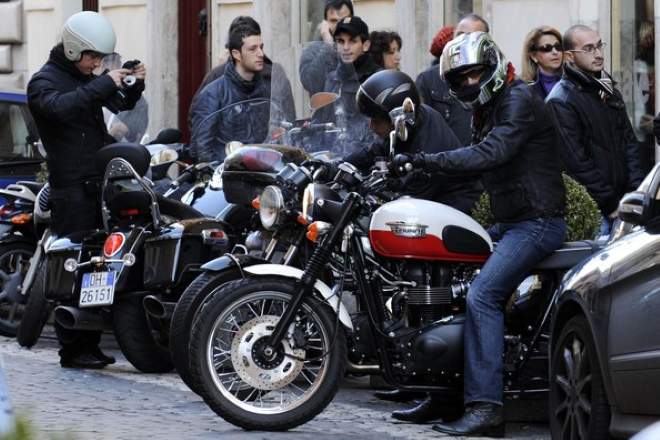 The English but Eire-based three-time Best Actor Oscar winner (for My Left Foot, There Will Be Blood and Lincoln) is also a genuine, life-long bike nut, most commonly seen aboard Hinckley Triumphs (although he was associated with Harleys and more in his youth. Also, during the filming of The Last of the Mohicans, he was often pictured aboard an old T140 Bonneville. He’s also into bike sport, is a big Valentino Rossi fan and once took a pillion ride with Randy Mamola aboard the legendary Ducati twin-seat MotoGP machine. His most recent ride pictured here (honest) is a Bonneville Scrambler. 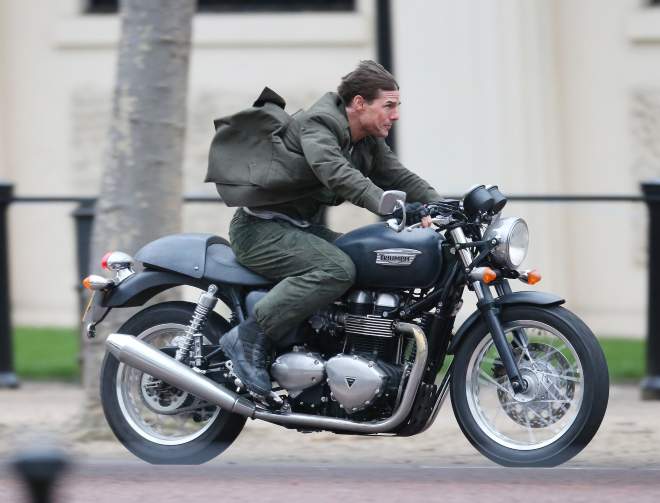 Arguably even more famous as a celeb biker than even David Beckham, the Hollywood A-lister and regular star of the Mission Impossible movie series doesn’t just ride on the road, owning, amongst others, a Confederate and a Ducati Desmosedici, he also routinely leverages bikes, and particularly Hinckley Triumphs, into his movie projects. A Speed Triple and a T595 Daytona famously featured in Mission Impossible II, while, most recently, he (and not a stunt man) rode a Bonneville Thruxton in Edge of Tomorrow. 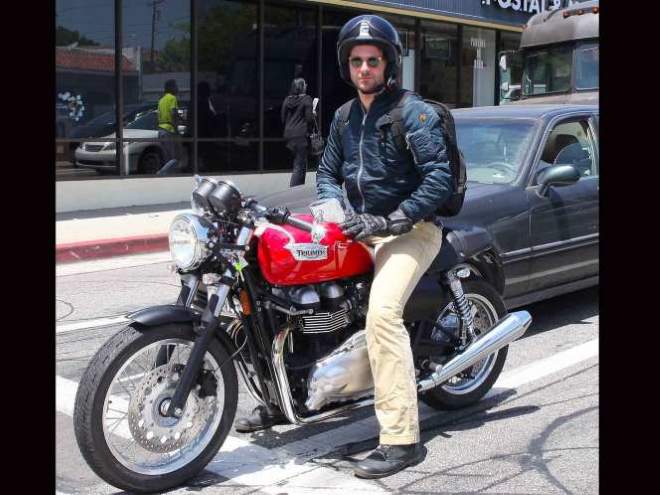 The one-time ‘World’s Sexiest Man’, according to a poll conducted by America’s People magazine back in 2011, and more recently the star of the Oscar-nominated American Sniper, American Hustle and The Hangover series, 40-year-old is another Hollywood A-lister actor who often prefers a Triumph Bonneville for getting about LA. His usual ride is a red Thruxton, as pictured here, however he doesn’t restrict himself just to California’s highways, though, and has also been known to also have Hinckley bikes made available when shooting abroad. 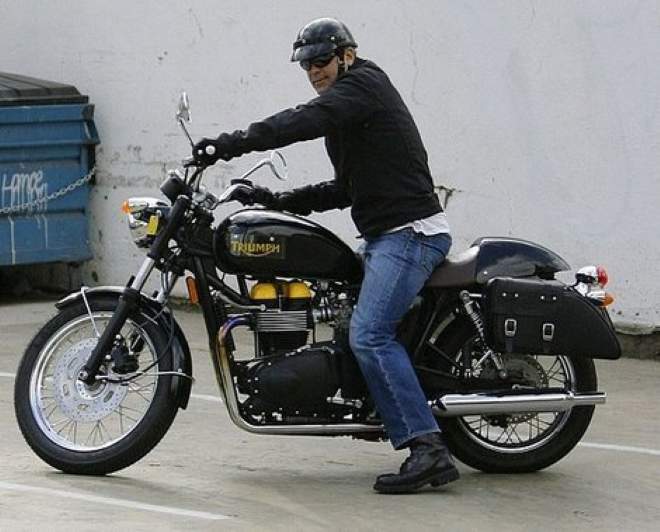 Another one to please the ladies… Hollywood heartthrob Clooney is yet another example of the Hollywood biker set. Admittedly, the star of the Oceans 11 series is more usually seen on more traditionally Californian Harleys and suchlike, but he has also occasionally been spotted aboard his mildly (and slightly oddly) customised Bonneville, complete with yellow (?) cam covers and the oddball combination of mini panniers and a racing seat hump. And you thought he was a man of style and taste… 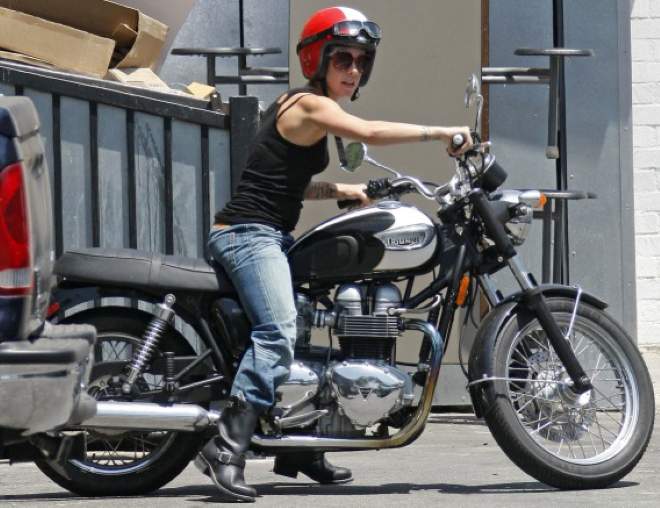 The American rock and pop singer (real name Alecia Moore) is married to former motocrosser and freestyler Carey Hart and regularly attended his races (she even proposed to him on a pitboard during a race) so it was perhaps inevitable that she’s eventually get into riding bikes herself. Her bikes of choice, though, on which she has regularly been spotted around LA, is perhaps more of a surprise and was partly dictated by her (lack of) height (she’s just 5’4”), namely a modified Hinckley Triumph T100 Bonneville. 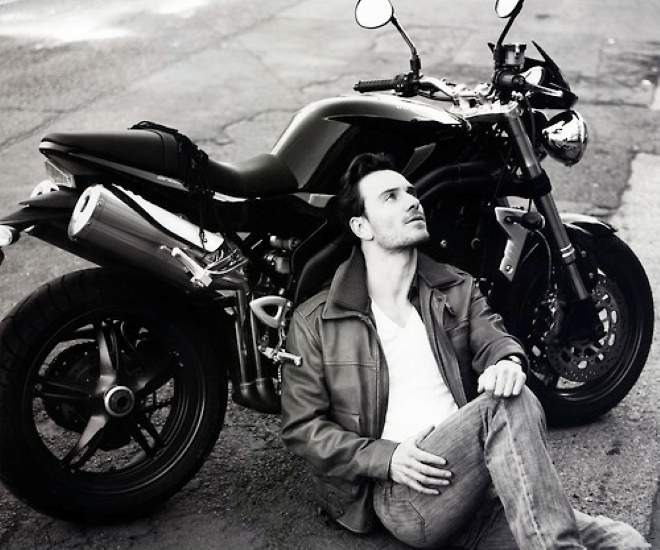 Rising German/Irish acting star Fassbender (he’s starred in Shame and 12 Years a Slave) is a lifelong biker with another long association with latter day Triumph. After filming Prometheus he famously has a two-month, 3000-mile motorcycling holiday with his dad, Josef, across Europe. On that occasion, however, it was his dad who was on the Triumph, a Tiger, with Michael on the BMW GS he bought after his earlier Triumph Speed Triple 1050 had been stolen. 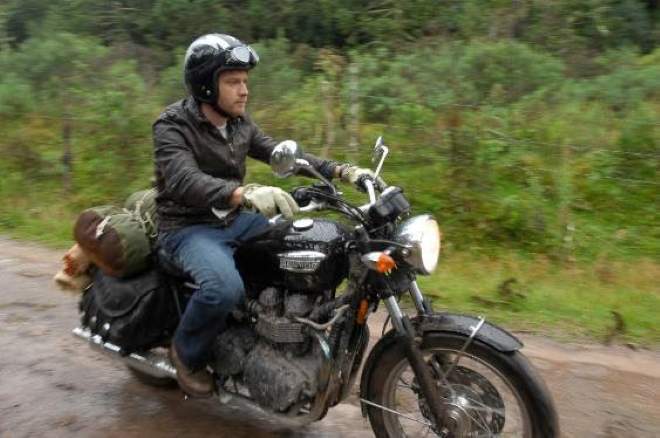 Almost as famous as a celebrity biker, most celebrated for his ‘Long Way Round’/’Long Way Down’ TV motorcycle travel series with friend Charley Boorman, as he is as Hollywood actor who broke through in Trainspotting, McGregor is actually more a Moto Guzzi than Triumph fan. He has a collection of classic Guzzis at his Hollywood home and is now also a brand ambassador for the Italian firm. However, before that deal was inked he did star in a Davidoff cologne commercial riding, yes, a Triumph Bonneville.

Have you seen any recognisable faces on any motorcycle?