This year is Honda Goldwing's 40th anniversary so in homage we've pulled together the top 10 fully dressed bikes with hard, three-pieced luggage and fully equipped for big tours. 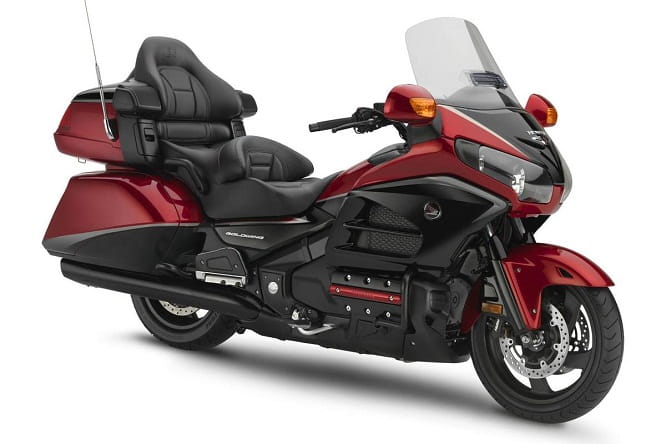 Definitive ‘full dress tourer’ and daddy of the whole genre celebrates its 40th anniversary this year, so it’s slightly ironic to recall that the original, four-cylinder GL1000 actually debuted in 1975 as a superbike. Instead, US buyers saw the heavyweight smoothie as a perfect long-distance machine and started adding Vetter fairings and panniers. Honda cottoned on in 1980 with the GL1100 Interstate, then 1982 Aspencade and a dynasty was born leading to the 1984 GL1200 and 1988 GL1500 (not to mention a host of imitators) and finally today’s 2001 GL1800. 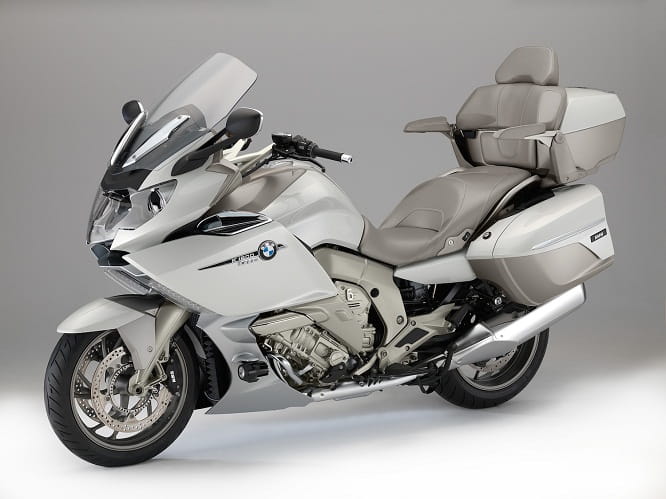 Range-topping, all-new, six-cylinder, technological ‘tour-de-force’ was introduced in 2011 as a replacement for the K1200LT and, with a class-leading 160bhp, ultra-sophisticated electronics including switchable power modes, suspension setting, traction control plus sumptuous comfort and luxury, it remains as the most capable and dynamic ‘full-dresser’ ever built. Slightly lighter, lower spec ‘GT’ version, without topbox etc is available while there’s also a huge options list, including revolutionary ‘adaptive’ headlight, heated seats, full entertainment system and more. 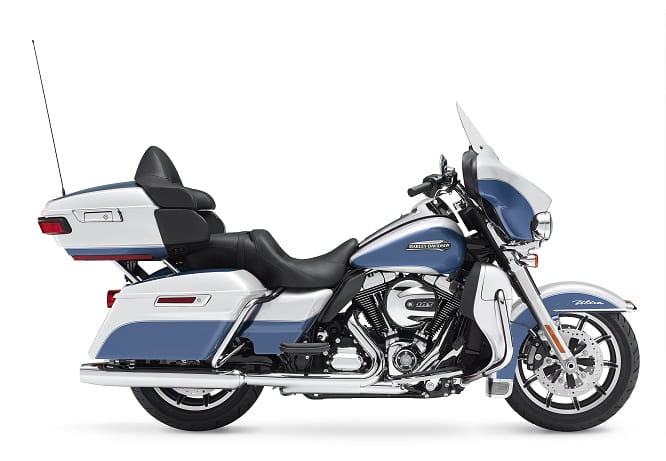 You’d be forgiven for thinking America’s iconic tourer hadn’t changed much since the ‘60s (the first Electra Glide debuted in 1965, gaining the distinctive ‘Batwing’ fairing in 1969) but you’d be wrong. The retro-styled, air-cooled V-twin received a complete revamp in 2014 as part of H-D’s ‘Project Rushmore’ overhaul of its touring range. Specifically brakes (now Brembo), suspension, engines (now partially liquid-cooled), touchscreen ‘infotainment’ system (possibly the best in the sector) and more are all hugely improved. Once a relic, now, though no K16, credible and desirable once more. 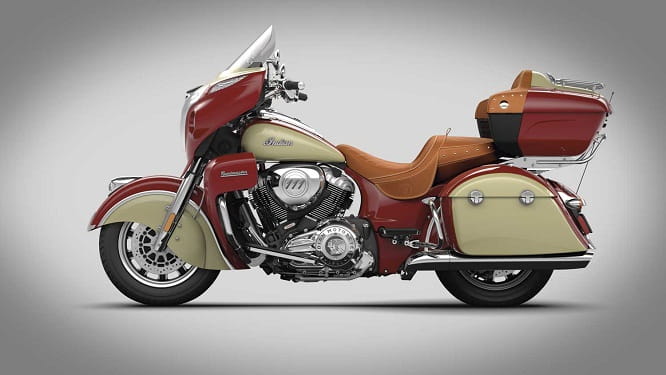 Harley no longer has things its own way in the USA. Historic American brand Indian, which had been H-D’s main US rival in 1920s, ‘30s and ‘40s before going bankrupt in 1953, was reintroduced in 2015 by new owners Polaris (who also own Victory) with a range of all-new designs – and they have been a huge success. The range-topper is this ‘full dress’ version of the Chief and features all the usual trappings plus trademark Indian deeply valanced front fender, ‘War bonnet’ riding light and heated tan leather seat. Big, brash and brilliant it’s like an ElectraGlide on steroids. 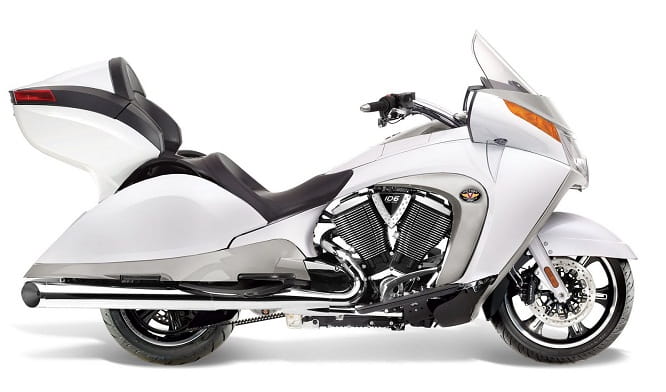 If Harley’s Glide is the iconic US full-dresser and the Indian Roadmaster the upstart rival, then Victory’s Dan Dare-styled Vision is the wackiest of all the American offerings. Introduced by Indian’s sister company Victory way back in 2007 its swoopy bodywork yet traditional 1731cc V-twin powertrain manages to blend retro and modern impressively. On the downside, the Vision lacks the electronics and sophistication of its latest rivals while the Victory badge lacks the kudos of Harley or Indian. 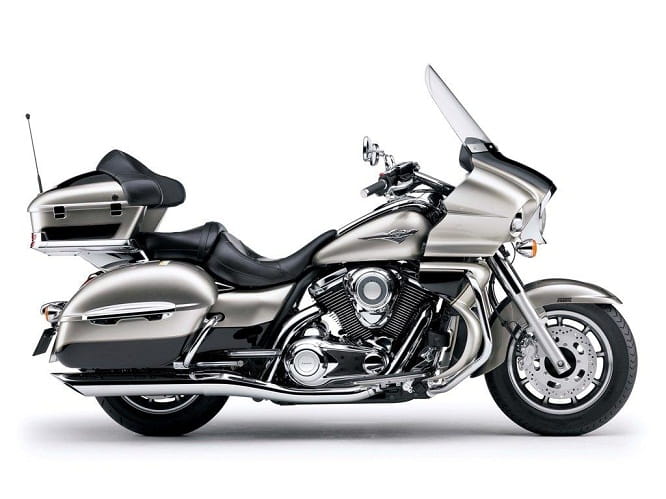 Self-proclaimed as ‘the world’s first Japanese full-dress V-twin tourer’ (although that might be a bike no-one was particularly yearning for), the Voyager was introduced back in 2009 as a competent, worthy, well-built and decently equipped machine and at a price that massively undercuts its arguably more authentic American competition. If you’re not too bothered about the badge, an able performer, just be aware its residuals are nowhere near as good as most rivals, either. 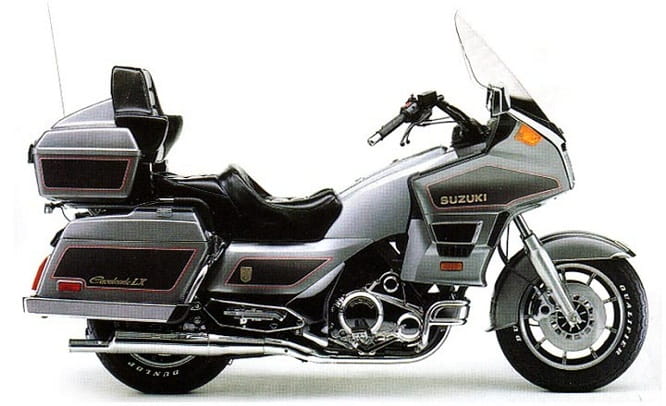 A short-lived, US market-only rival to Honda’s then hugely popular GL1200 Aspencade. Suzuki’s stab at full-dressers lasted only a couple of years, was never officially brought into the UK and was V4-powered where the Honda had a flat four, but in virtually every other respect it was a clone of the ‘Wing. It didn’t have the ‘Wing’s refinement, class and proven ability, either, but today, being ultra-rare, makes up for it a little with bags of curiosity value. 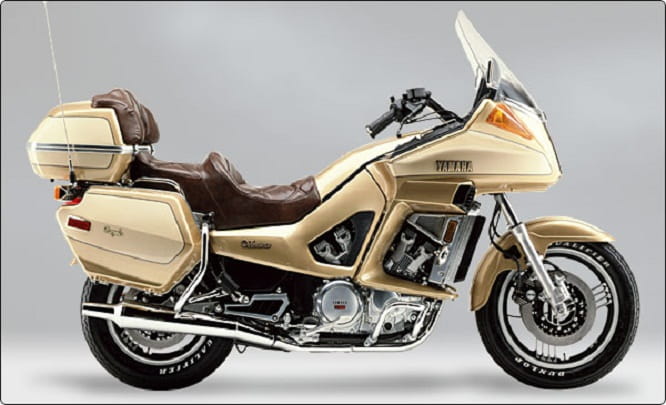 Yamaha’s mid-‘80s attempt at jumping on the GoldWing bandwagon was more successful than most. Based on a detuned VMax, V4 powertrain, it came in two guises: the basic, Honda Interstate-rivalling Venture, and the top-spec, Aspencade-challenging Venture Royale. Like the Suzuki and Kawasaki of the era, a US-only model so very rare in the UK and now something of a relic, but interesting nevertheless. 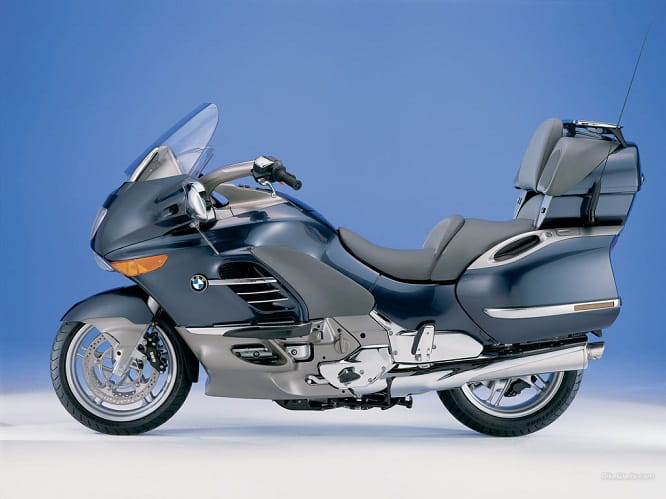 The Bavarian firm’s first heavyweight ‘full dresser’ (the earlier, much lighter K1100LT doesn’t count) was revolutionary in 1999 and responsible for massively modernizing the ‘full-dresser’ concept. Based around an enlarged version of the then longitudinally-mounted K-series four-cylinder engine, the LT featured bags of luggage capacity, super-smooth drive along with previously unseen full dresser performance (it topped out at around 130mph) not to mention sophisticated comforts such as heated seats and handlebar grips. 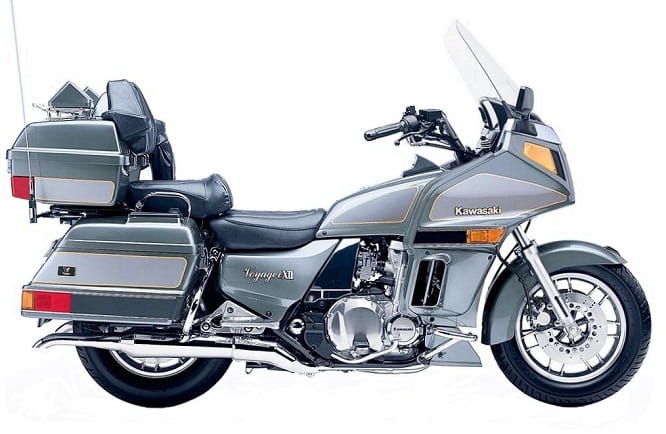 Possibly the rarest and wackiest of the breed, the 1300 Voyager was produced from 1984 to 1989 at the height of the Japanese factories attempts to out-GoldWing Honda in America. The 1300 was actually Kawasaki’s second attempt at a full-dresser following its four-cylinder ZG1200.  The new 1300, however, was based around the humungous, six-cylinder, Z1300 powerplant. Big, heavy and uber-smooth in a straight line, unfortunately all of those things counted against it through the turns.