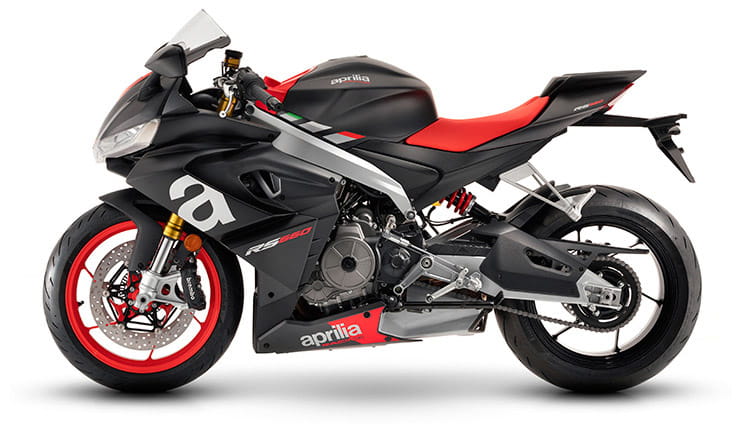 Sports bikes are for many the ultimate, purest form of motorcycling. If speed, cornering brilliance and the ability to be the fastest from A to B deliver the most two-wheeled excitement with no compromises for comfort or practicality then a sports bike is the motorcycle for you. And the very fact that, by delivering just that means sportsters have the most sophisticated engineering and technology all wrapped up in racy, poster-bike bodywork, only adds to the appeal.

But, of course, that’s not the end of the story and sports bikes aren’t for everyone. A 125cc sports bike, restricted by law to 15bhp, requires a slightly different set of attributes. Those entering the A2 class will want sports bike fun but a degree of user-friendliness, too. And although there are plenty of litre-class superbikes out there, all vying to be some kind of ultimate and with prices extending to over £40K, it’s not easy to know which suits you best. Besides, although the once hugely popular supersport 600 class is now only a shadow of what it once was, there are still plenty of sub-1000cc sports bikes, all capable of mind-bending thrills, available, too.

So, to help you choose, we decided to come up with a round-up of our current Top 10 sports bikes, to include bikes ranging from A1 125s all the way up to £20K+ WSB-winning weapons and, to help budgeting, arranged them all in price ascending order. Hopefully there’s something here to suit you. If there is, we promise you won’t be disappointed… 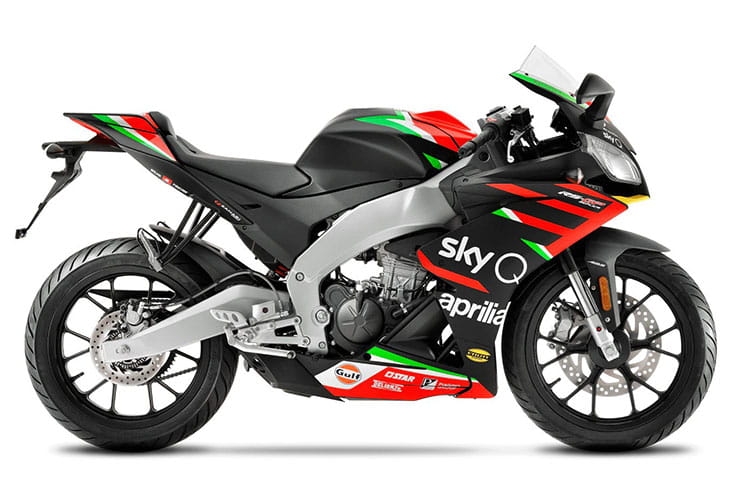 When you’re 17 and only qualify only for an A1-compliant 15bhp 125, a sports bike has a slightly different meaning with styling and kudos triumphing but with usability and affordability being important, too. But although Yamaha’s best-selling R125 remains popular, the ultimate ‘poster bike’ for this generation is surely Italian marque Aprilia’s gorgeous RS 125. Effectively the Ducati of the 125 class, the RS built its reputation in the ‘90s on a screaming, 125GP-alike two-stroke engine with the aluminium twin beam frame, cycle parts and styling to match. And although since 2011 Euro regulations have forced it to switch to more muted, four-stroke power, its RSV4-alike styling, quality brakes and suspension and GP heritage means it’s still the one most lust after. Today a new RS 125 will set you back £4499, but the GP Replica, for £100 more, comes in full MotoGP-alike livery. 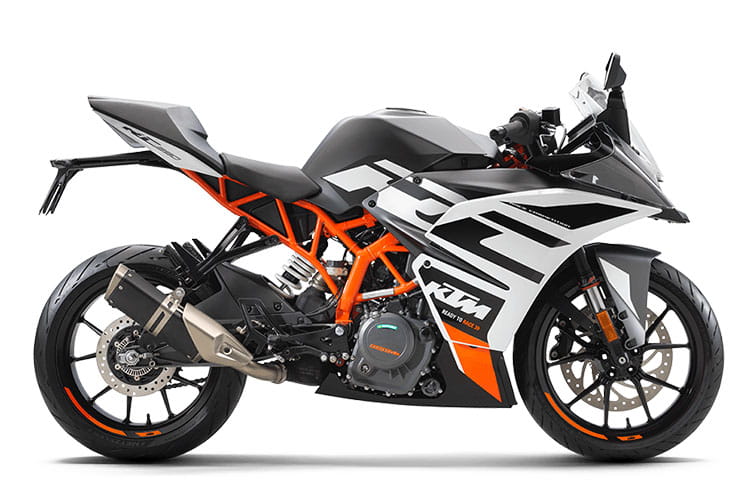 Arguably the rawest, purest, most focused A2-compliant sportster of all, the RC 390 is a simple, lightweight, compact single-cylinder sportster inspired by the Austrian firm’s Moto3 race bike and based on the powertrain and running gear of its lively, looney 390 Duke. As such it’s small, focused – and fabulous fun, as long as you’re fairly small and like your thrills in short doses. Its 44bhp single, though not as thrilling as a ‘multi’, has enough to beat ‘the ton’ but it’s the sharp, lightweight chassis and braking performance where the RC truly stands out – very few bikes are as nimble, lively or engaging through medium speed twisties. Plus, being so light and small means the RC is also about as unintimidating as sports bikes get for novice riders, too. Not cheap, and it’s so basic you do wonder a little where your money’s going, but it’s still one of the best. 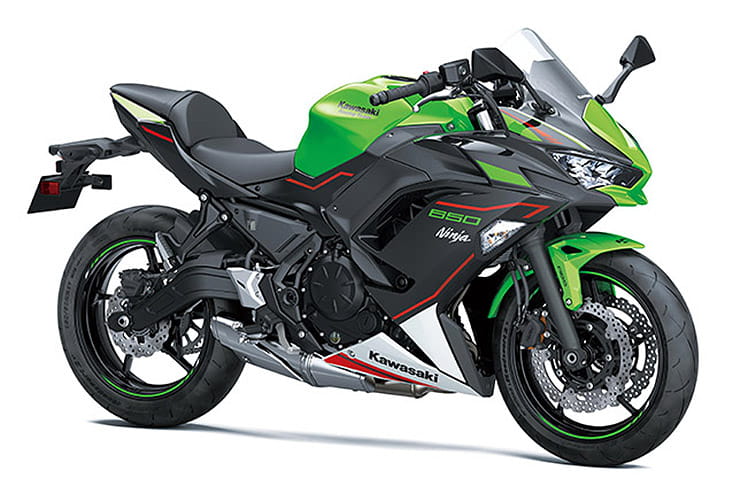 Once you’ve qualified for your full licence the idea of moving straight to a 150bhp+, litre-class superbike can be more than a little intimidating – which is where newcomer-friendly, middleweight sportsters like the Ninja 650 come in. Introduced in 2017 then updated and refreshed in 2020, it’s a fully updated version of the old ER6f and as such is based around the familiar, willing and free-revving 649cc parallel twin that dominates Minitwin racing, particularly in the renamed Junior TT. Reworked to produce a useful 67bhp it’s now held in a lighter, Ninja H2-inspired tubular steel chassis with new rear suspension, twin wavy discs and racy, all-new bodywork that’s a kind of mix between Kawasaki’s ZX-10R and the Ninja H2. The overall result looks great, is decently equipped, light, nimble and upright enough to be an absolute doddle to ride, reasonably versatile and yet great fun to thrash and brilliant looking as well. As a stepping-stone to 100bhp+ sports bikes there are few better… 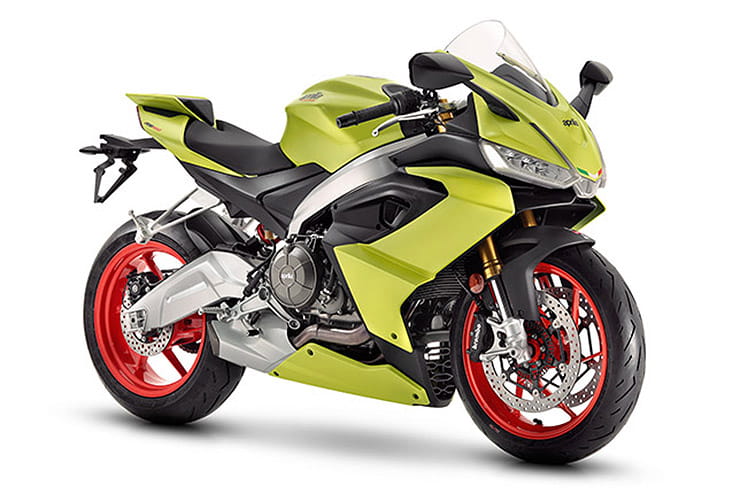 Aprilia’s all new RS660 is a revelation. A 100bhp middleweight twin that’s effectively ‘half’ the V4 from the RSV4 1100 V4, it succeeds in being both a genuine, classy and enjoyable road sportster yet is also one that’s affordable and accessible for relative novices. With a short wheelbase, sharp steering geometry, light weight and quality suspension it handles brilliantly. Yet it’s also surprisingly relaxed and comfortable with excellent ‘real world’ ergonomics. The new engine is great fun to thrash, sounds good, is responsive and blessed with excellent fuelling and a synchronized quick-shifter. While the bonus is, when you look down at the full colour TFT dash, you’re not doubling the speed limit and facing a jail sentence should you get caught. The RS660 is reasonably quick, I’d estimate top speed is around 140mph, but unlike a RSV4 not scary on the road. The overall result is a versatile, fun and desirable bike for inexperienced and experienced riders alike and a comfortable and unintimidating road bike with a typically Aprilia sporting edge. 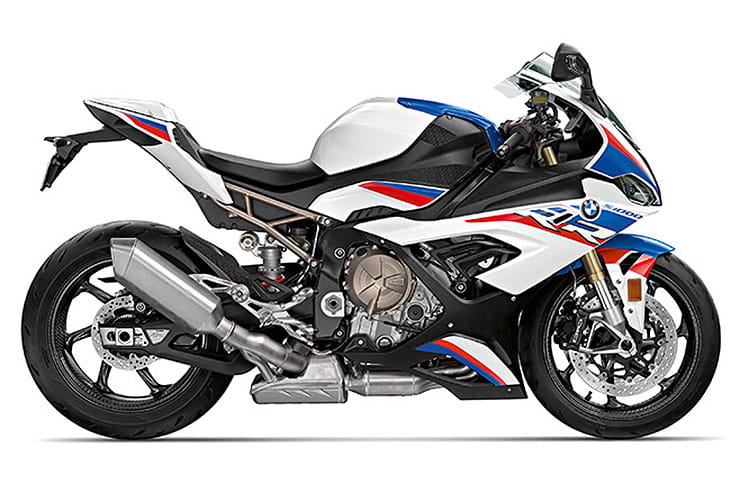 Ten years on from the original, game-changing S1000RR, BMW have come up with an all-new, third generation model that has not only finally got rid of the controversial asymmetrical headlights but was better in every way. More powerful (now with a giddy 204bhp), lighter, sharper-steering and more sophisticated BMW’s new flagship is also, even more surprisingly, easier to ride, more roomy, comfortable and reassuring, as well. Never the cheapest, yet to succeed in WSB and admittedly facing fierce competition from the likes of not just Ducatis’ V4 Panigale but also Honda’s latest Fireblade and the newly-updated (and WSB-dominating) Kawasaki ZX-10R, the BMW stands out not just for its brute power and dynamism, but even more for its real world road manners, prestige badge, classy dealer network and decent residuals. Besides, if you want more there’s also BMW’s traditional long list of accessories and even a new M1000RR version. 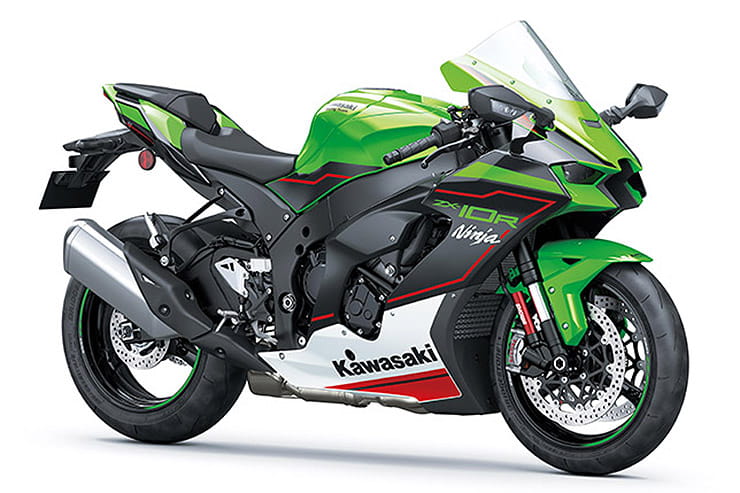 Kawasaki’s ZX-10R has been the world superbikes track king pretty much since this latest, ‘point’ version, complete with 197bhp and a track-attitude like no other, was launched in 2011 then continually evolved since. If you wanted a track-ready, rev-hungry, electronics-laden racer-replica, the ZX-10R was the one – as has been proven by its seven world superbike titles, including six-in-a-row for Ulsterman Jonathan Rea since. For 2021, thanks to an aerodynamically-driven facelift and other subtle mods, it promises to be even better still while true track fiends have the option to go further still with the RR version, complete with lightweight Marchesini forged wheels, titanium engine parts and more, for a whopping £24,799. If you want the closest thing there is to a proven superbike king, this is it. 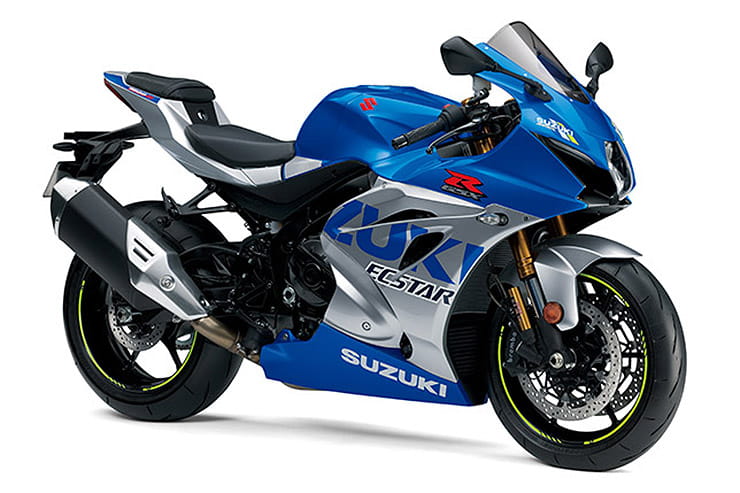 Suzuki had been one of the ‘big hitters’ in the 1000cc superbike class, ever since its introduction of the class-leading first GSX-R1000K1 in 2001. However, despite subsequent highs such as the 2005 K5 version, the GSX-R fell away slightly from 2007, becoming larger and heavier – and by so doing remaining a great road bike – and less competitive on track. All of which made the arrival of an all-new, MotoGP-inspired ‘Gixxer in 2017 big news. Two versions were available, a base, bargain-priced GSX-R which has niow been dropped, and this ‘R’ version complete with variable valve timing and higher spec cycle parts that grabbed most of the headlines and won that year’s Senior TT with Michael Dunlop. 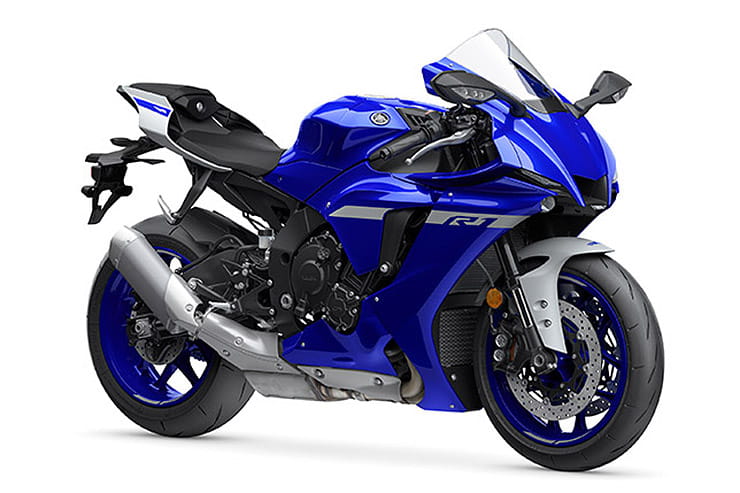 Yamaha’s legendary R1 has been at the top of the Japanese superbikes tree ever since the original rewrote the class rules with its whopping 150bhp but ultra light weight in 1998. Repeatedly updated over five distinct versions since, this latest-generation, MotoGP M1-alike version debuted in 2015, characterised by diminutive GP looks, whopping 197bhp power and sophisticated electronics. In truth, it had started to fall behind the pack once again, particularly the class leaders from Ducati, BMW and Kawasaki, but a 2020 updated and refresh improved the looks and made it Euro5 compliant without compromising its 197bhp peak power. Its dash may not quite match the latest big screen colour TFTs from the likes of the S1000RR and V4 Panigale and it remains compact and extreme, but the latest R1, especially in higher spec, semi-active Ohlins suspension-equipped R1-M form (costing £22,599) arguably remains the closest thing to a Japanese MotoGP bike you can buy – and who doesn’t fancy at playing at being Rossi? 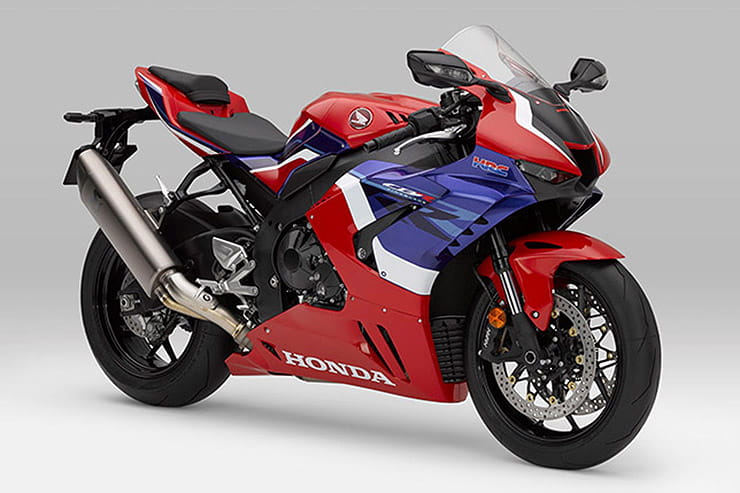 After a decade in the superbike doldrums and the false promise of an all-new 2017 offering that had neither the raw power to upset the elite nor electronics sophisticated enough to compensate for it, the legendary Fireblade was finally back with a bang in 2020. Derived from Honda’s MotoGP expertise, with 201bhp, sorted electronics and sharper and racier than ever, it contrasts with previous recent ‘Blades by being totally focussed on winning on the track – which it has already made a decent fist of. The downside of that, of course, is, (like most superbikes, to be honest) it makes little practical sense on the road, is extreme and can be annoying. Revvier than most, without the ShiftCam-supplied grunt of BMW’s latest S1000RR, the latest Blade requires you to forget that previous examples also had a flexibility and comfort that made then great road bikes. But as a track weapon, this latest Fireblade is the sharpest yet. 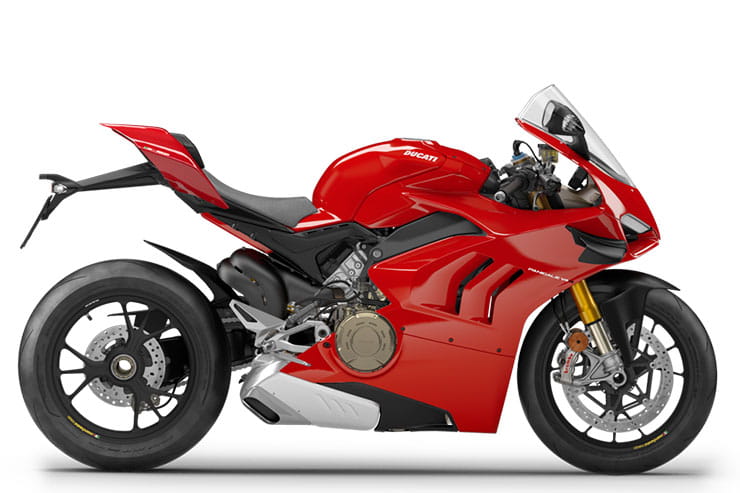 Revolutionary bikes don’t come along that often in the superbike class. Going back to the early 1990s there was the original Honda CBR900RR FireBlade, followed by Ducati’s 916 in 1994. The first R1 in 1998 was followed by the first GSX-R1000 in 2001. But this, Ducati’s all-new V4 replacement for its long-line of class-leading V-twins, is up there with all of them. First there’s its significance: a V4 in place of Ducati’s V-twin heritage. Then there’s its specification: a class-leading 214bhp at the crank, which translates into an equally class-leading 198bhp at the rear wheel; a peerless chassis slathered with semi-active Ohlins (in this S form, the base model does without), the very latest Brembo Stylema calipers, Marchesini wheels and class-leading electronics, all controlled via a flash, full-colour TFT display. But best of all is how it all works and goes – and that’s simply like nothing else. Most superbikes are capable of taking your breath away, the Panigale V4 does it in every way – its look, spec, ability performance and, yes, at nearly £25K, its price, too. But boy is it worth it.