Life as a motorcycle cop 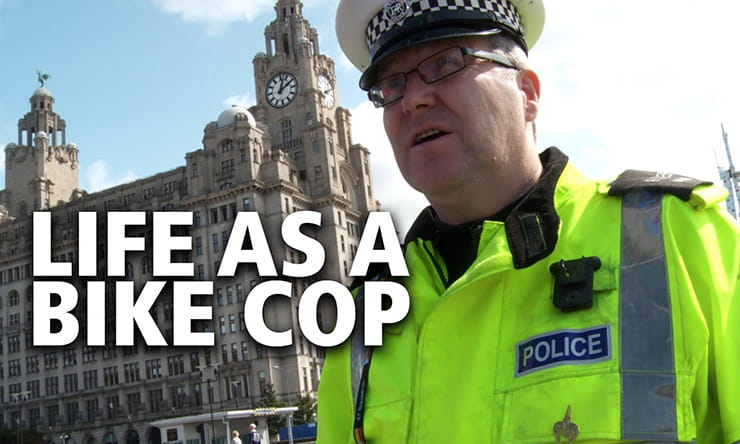 The term ‘proper biker’ is used to describe a variety of riders, but if it means someone utterly devoted to motorcycling, who rides every day, and who goes on regular biking holidays with their mates, it’s surely never been more appropriate than when talking about Dave Yorke.

Dave rides his own bike to work every day, and when he’s there, he does little but think about motorcycles. He’s lucky – the people who work with him are all bikers too. Last year they all went on holiday together – on their bikes – to the north coast of Scotland, and they often take advantage of the easy ferry crossings to get to the Isle of Man, to take advantage of some of the most spectacular (and fast) public roads in the world. So why, when he’s riding at work, do so few other riders wave at him?

Dave Yorke is the Sergeant at the Operations Motorcycle Team, Merseyside police. He probably gets a few nods and waves when he’s on the department’s unmarked bikes, but when he’s on the fluorescent yellow BMW… not so much.

Life as a motorcycle cop

What bikes do police use?

The officers at Merseyside use BMW R1200RTs as their fully-marked rides, but they also have a black Honda VFR800, equipped with four discreet cameras, and a black Honda Fireblade.

For less accessible areas, there’s a fleet of Honda CRF250s, which replaced the team’s trusty Suzuki DRZ400s – they still have them though, and they’re still popular with the officers, not least because they’re already so beaten up, there’s no paperwork if they get dropped!

Sgt Yorke says his team don’t claim to be the world’s best off-road riders, but they’re lucky enough to have a fantastic 40-odd mile loop in the nearby Lake District to practice on.

They’ll also use some of the roads in the national park to practice corners and bends on the BMWs.

What training do motorcycle police officers have?

To get to the level of ability of Sgt Yorke and his team, officers take a standardised four-week intensive course. On successful completion of that, they’ll spend another four weeks dedicated to an advanced riding course. By then, they’ll be among the UK’s very best road riders, with a level of skill that’s continuously polished by riding every day.

But as VIP escort-trained riders, the team’s had to undergo a further two-week course. Ten weeks of riding, 250 miles a day; that’s why they know how to safely use all of the road, and how to be very, very rapid in all weather conditions.

Of course the police can chase motorcycles. The officers in Dave’s team are all TPAC trained (Tactical Pursuit and Containment), which means that, while driving the high-performance cars in the fleet, as long as a given situation has been assessed and cleared, action can be taken to stop a dangerous criminal (even if they take their helmet off).

When on their bikes, officers still have access to DNA spray, which invisibly marks a suspect to give the police the option to stop a chase and collect the individual later, forensically linking them to the crime.

Stop Sticks are another option, which will quickly and safely deflate a tyre. Unless the rider does something stupid, it won’t make them fall off, and this is only used where necessary; it’s not a tactic to simply stop speeding bikers.

What kind of crimes are being tackled?

Sgt Yorke and his team hit the headlines in 2018 after huge success in reducing the number of motorcycle thefts surrounding the Isle of Man TT period. You can read more about it here.

While their training sees them escorting everyone from football teams to royalty, their day-to-day work is in combatting organised crime and its use of motorcycles. Bikes are stolen from the area for a number of reasons; from daily rides for criminals to being stripped for parts. There are also lot of firearms incidents in Merseyside, which will often have a motorcycle or quad associated with them.

This link between bikes and violent crime is just one of the reasons Sgt Yorke encourages people to report any suspicious activity. There’s a perception that the police aren’t interested in motorcycle theft, but while Dave admits the reporting of a stolen bike won’t always result in the police being able to attend the scene of the crime, the information is collated. From there, patterns emerge, and more often than not, the information that you – and others – have given leads to an arrest several months down the line.

Sgt Yorke and his team has just announced the sentencing of two men who were riding a stolen motorcycle in Liverpool city centre. Using the unmarked VFR and ’Blade, Merseyside officers followed the bike after it was spotted being ridden along Leeds Street back in June 2018. The bike – a Honda CBR650F – had been taken from the Plymouth area in January 2018.

“We won’t tolerate the illegal use of motorcycles on Merseyside,” said Sgt Yorke, “and our Operation Brookdale campaign, which targets the illegal and antisocial use of bikes, continues as a year-round operation.

“I would ask anyone who has information about where stolen motorbikes – or bikes that are being ridden in an antisocial manner – are being stored, or about who is riding them, to contact us so we can take positive action.”

Anyone with information is asked to direct message Merseyside police at @MerPolCC, call 101, or contact @MerPoltraffic on 0151 777 5747.

With a full year between the theft of the motorcycle and the successful conviction, it’s understandable that some people might get the impression that no action’s taken, but as was reiterated by police in London, when we exclusively interviewed Westminster CID over London’s scooter problem, the reporting of crimes and suspicious activity is vital to cracking down on the criminals. 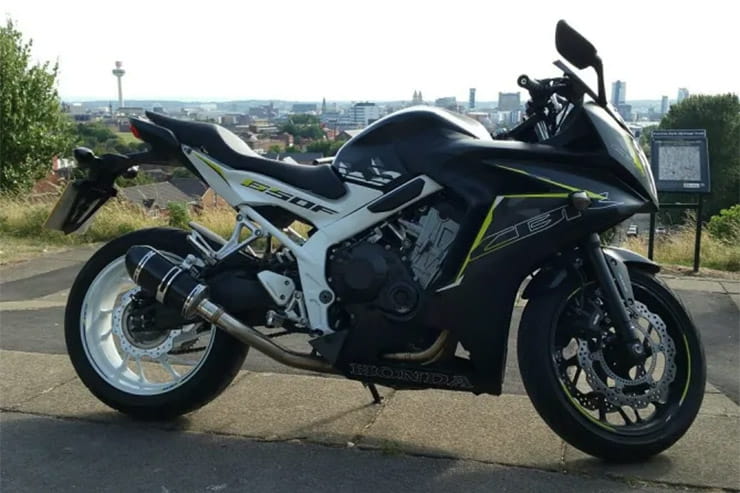 This CBR650F was stolen in Plymouth, then subsequently captured in Liverpool

Do you wave at police bikers?

With a contagious passion for motorcycling, Sgt Dave Yorke and the other officers at Merseyside prove that they’re bikers just like you and me. Sure, as in any job, there’ll always be good and bad, but you’ll struggle to find a motorcycle police officer who doesn’t share much of the positive, friendly attitude of the Merseyside team. Having worked with police riders around the country, I know they’re not unique.

And yes, I do wave at coppers when I’m on the bike.