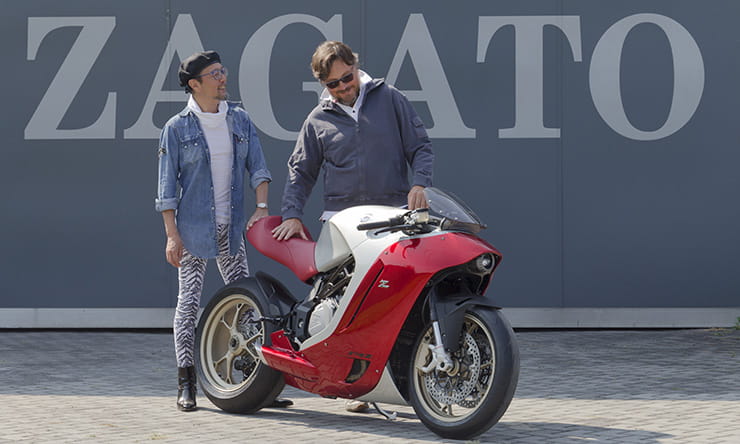 With recent news that car designers Zagato had built a one-off MV Agusta, called the F4Z, Bike Social spoke to company boss Andrea Zagato (pictured above with designer Norihiko Harada, vice president of Zagato) to find out more about the company and the project.

I discovered this when I was 10 and fell in love with a Lancia Fulvia Zagato. Everyday I used to admire the bright red coupé parked front of my home. The owner was a middle age man that worked in the small bank at the ground floor of building where my family lived and one day, I bravely asked him: ”How much is the maximum speed?” The short bearded elegant man answered proudly “More than 200 Km/h..!”  I felt immediately that he had lied but I was sure that his Lancia was faster then standard Fulvia and also my dad’s car Fiat 124 Coupe, but after years of studying magazines I realised the company's formula for success.

If you like it, and you have the money, Zagato's design studio can create a tailor made suit for any car or motorcycle you like it. That's what happened with the F4Z, a 250,000 Euro one off toy, commissioned by a wealthy Japanese collector, as we found out when we met Mr. Zagato in his Milan studio.

Can you tell us more about Zagato?

The company was founded by Ugo Zagato in 1919 and to this day it is the only remaining Italian coach builder to be independent and still in the hands of its founder's family. Right from the start, Zagato specialised in light two door/two seat cars (coupe or spider). In almost 100 years, they produced more than 300 different models of sports cars for the world’s most prestigious brands. Nowadays Zagato  is a modern 'Total Design Centre' and coachbuilding Atelier, able to blend together and balance the most advanced engineering technologies, the use of new materials and the traditional workshop production procedures. Lately we have been diversifying beyond our traditional sports car field, as with the F4Z.

The F4Z is the first motorcycle created by Zagato: could you explain the reasons this challenge and why you chose the MV?

We are a customer-oriented company that sells directly to the collectors, which avoids speculative brokering. It’s always been the clients who promote new initiatives, the birth of a new model or of a new collaboration. Once it was the professional drivers and/or the gentleman drivers but today it’s the car collectors. One of these, a young Japanese businessman who owns many Zagato collectibles and is an Italian motorcycles lover, asked us whether it was possible to have an MV Agusta Zagato.

Norihiko Harada, Vice President Design of Zagato, who shaped the F4Z, was particularly inspired by the passion for motorcycles of his fellow countryman. I consider Nori being more of an artist than a designer, as he has an ability to create almost timeless objects. In fact, the commissioner didn't want anything modern or fashionable, but something that could instead keep its value and appeal. What he wanted was a motorbike that wasn't comparable to any other, that was classic, but always up to date. The four-cylinder platform was chosen during the first meeting with MV, when we first made the proposal. The F4 is the most iconic of MV’s motorbikes.

What has been the most challenging part of the F4Z project?

The time when we were still uncertain that applying our design philosophy to a product so different from a car would have worked and I must say that the support and appreciation by the MV Agusta team has been fundamental in overcoming these difficult moments.

Production high performance bikes consist of many parts put together, but it is difficult to create a form from many small surfaces. Consequently, Nori and his team needed a single area, sufficiently large to allow them to change the design language and to create a monolithic object, streamlined and aerodynamic.

In addition, the new body shouldn't interfere with the original mechanics. MV Agusta, for this purpose, supported the Zagato team with all the 3D data of the production model. These proved absolutely vital, as, while in a mass produced vehicle tolerances are ample, here every piece had to fit perfectly, down to the micron.

Particular attention has been given to ergonomics, taking into consideration the body size of the customer. This resulted in the only small variation in the F4Z proportions, that is the slightly reduced height from the ground to the saddle.

Also the deflector, placed over the instrument cluster, has an ergonomic rather than aerodynamic function. Initially, in fact, it wasn't supposed to be there at all, since Nori had made a clean line for the fairing. Subsequently, though, he realised that, without a cowling to protect the instruments from sunlight, during the day these were completely unreadable.

After the huge interest created around the F4, are you thinking to go on with other models? In this case, what motorcycle you would transform?

The key is still in how tight-knit are the two teams working together, ours and MV’s. Enzo Ferrari, 30 years ago, used to say: "Solitary genius has been replaced by team work". A man with a vision! Now we are considering with MV the possibility of producing a few-off limited edition.

Zagato built his popularity thanks to aerodynamics and lightweights dream cars. Could you tell us some technical figures about the F4Z?

The main fact is that the bike’s 'case' (the bodywork) is made of a limited number of parts. This gives it a perceived air of solidity and plasticity that is typical of our Atelier cars. The other essential characteristic in the F4Z design is the rationalistic approach and the idea of creating an evergreen, that is an object that is not particularly influenced by the latest fashion, but lasts in time. As far as technical data are concerned, the mechanics are the original ones, whereas weight is reduced, since the original exhaust system was removed and lighter materials were used for the fairing.

From four wheels to two...

Zagato isn't the first Italian car design studio to turn its hand to designing motorcycles. Here are a few other examples from over the years...

Our first dip into the archives goes back 60 years, to 1956 and the Aermacchi “Chimera” - an advanced lightweight motorcycle designed by Luigi Rivelli, Count of Beaumont. Born in Naples, Rivelli was a car designer well known for his work with Fiat (1500 6C and 1100 Viotti) and Simca (Aronde and 1000).

The amazing design of Chimera was focused on aerodynamic bodywork, created with a mix of light alloy die casting and steel pressing that covered the single cylinder engine. Available in two displacements, 175cc and 250cc, the Chimera was nonetheless a complete flop with less than 300 units sold between 1956 and 1964.

Famous car stylist Giorgetto Giugiaro of Italdesign is certainly one of the most prolific and versatile industrial designers in the world. Between the Seventies and Nineties he designed everything from trains to furniture, through to cameras, watches and even a special kind of Barilla pasta.

Giugiaro also loves his motorbikes, especially trial bike that he rides along the mountain of Piedmont, where he lives. He's also the only Italian designer to put his name to a Japanese motorcycle. That was the Suzuki RE5. Powered by Wankel rotary engine, it was a novel and interesting design to go with the futuristic engine. The bike was futuristic, not only with its engine but also its advanced lights and car style dashboard. It had a few advantages and many disadvantages over its traditional competitors, with its poor fuel consumption being a major negative as the world entered the oil crisis of 1973.

Wealthy businessman Giancarlo Morbidelli was already famous for his racing motorcycles (he won the 1977 250cc world title with rider Mario Lega) when he had the idea of building the most exclusive motorcycle ever built in 1992. Pininfarina, the greatest of all Italian car designers, were commissioned to design the bodywork for the 850cc V8, but the world's most expensive motorcycle was not viable. It’s unclear how many units were actually assembled and the only person known to have ridden one was the internationally syndicated journalist Alan Cathcart. If you want to see one in the metal, you can visit the Morbidelli Museum in Pesaro, Italy, or the Barber Vintage Motorsport Museum in Alabama.

The Benelli 750 Sei should have been Italy's answer to the magnificent Honda CB750 Four, the benchmark of the superbike segment back in the day. In 1972 Benelli was, together Moto Guzzi, part of De Tomaso Industries, the company driven by the Italian-Argentine businessman Alejandro De Tomaso and which included car manufacturers Maserati, Innocenti and De Tomaso, as well as the design firms Ghia and Vignale. Together they combined to produce a competitor to the new Japanese superbike generation but it didn't quite work. The Ghia/Vignale designed bike looked pretty good but the six-cylinder 750cc engine was a letdown. In comparison to the CB750, the Benelli was overpriced, noisy and poorly finished. After the Benelli 750 Sei, which was assembled in Guzzi's Mandello del Lario factory, the range spread to a four-cylinder family of 250 and 350 branded Benellis and Guzzis, as well as the best selling Benelli 500 Quattro.

MV Agusta followed Benelli by hiring a Italian influencer in industrial designer, in this case Giorgetto Giugiaro, director of the Italdesign, the studio nowadays under the control of Volkswagen.

In this case, the job was update old MV Agusta 350 S. With the 350/400 moved on my new models like the Moto Morini 350, Ducati Desmo, Honda CB400, Yamaha XS400 and Suzuki Titan 380. Giugiaro, himself a passionate motorcyclist, wrapped the old MV skeleton with a modern and feline body that disguised the ancient shape of parallel engine. It was for this reason that most customers bought aftermarket full fairing for their Ipotesis, covering the old engine and turning their bikes into replicas of those ridden by Phil Read in the Grands Prix.