‘There is no limit to the places a dream can carry you. All it takes is the determination to get there.’ Honda NR750 brochure. 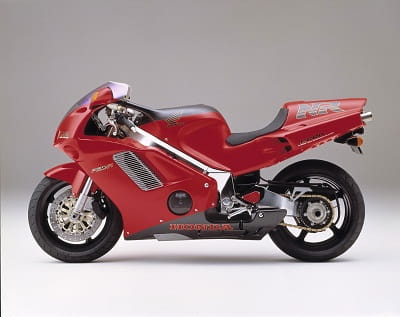 Last year Honda got everyone all hot under the collar about the FireBlade’s 20th Anniversary then positively made steam erupt by announcing they would be making a MotoGP bike for the road. However in all the excitement, most forgot that Honda have already made one of the most technologically advanced motorcycles ever. And it was launched in the same year as the FireBlade.

1992 will go down in motorcycle history for many reasons. Not only did Honda Project Leader Tadao Baba whip the covers off the original Blade, Honda also revealed a bike that it claimed would change the face of motorcycling forever – the NR750.

With a price tag of £38,000, which was over five times the Blade’s £7390 retail price, the NR certainly wasn’t a bike for the every day man like the Blade, however it was a piece of engineering brilliance. This was corporate flag waving at its very best – and 21 years later the NR750 remains a unique and sublime machine that few have seen and even fewer ridden. 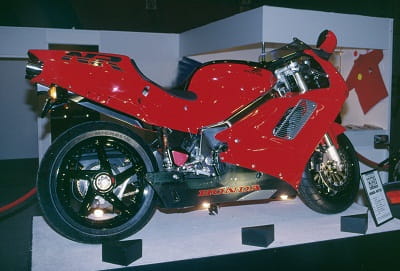 Initially shown in 1990 when a fleet of NR750s were, unbelievably, used as traveling marshal bikes at the Suzuka 8-Hour race, it was a further two years before a mere 200 were released for general sale. While the price tag was fairly fearsome, when you looked at the technology inside the NR you could see why it commanded such a premium.

In the late 1970s and early 1980s, Honda fairly unsuccessfully attempted to race the NR500 in GPs. This radical race bike used a four-stroke engine with oval pistons, something that allowed them to squeeze in twice as many valves per cylinder head as a conventional engine. The logic was simple, more valves equals more fuel/air into the engine and therefore more power. And the advantages didn’t stop there. Due to the shape of the pistons, which are best thought of as sardine cans, Honda could actually make the cylinders smaller as the circumference of the oval piston was 30% smaller than the equivalent pair of round pistons – reducing friction as well as the overall dimensions of the motor. While the theory may have been sound, the reality wasn’t quite as rosy and the NR500 was quickly withdrawn and the oval piston project mothballed until 1992…

The NR750 uses all of the technology from the NR500, but puts it in a 747cc motor. Inside the cases each oval piston runs twin titanium con rods with each cylinder head containing eight valves, two spark plugs, two fuel injectors and even two intake ports and two exhaust ports. The cams are run via cam gears (just like the RC30), allowing the engine to rev to a staggering 15,000rpm while the stainless steel exhaust is an 8 into 4 into 2 that exits under the seat unit. And this is something worth nothing – Honda unveiled an underseat piped bike in 1992 – two years before Ducati’s iconic 916. Massimo Tamburini, the designer of the 916, freely admits the NR influenced his decision to put the 916’s pipes under the seat. 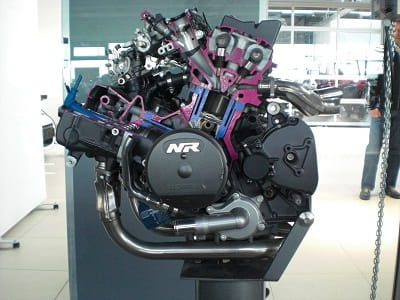 Away from the engine the NR continues to impress. The chassis combines extruded aluminium frame spars and cast sections in the same way as the RC30 while also using a similar style of singlesided swingarm. To make it even more exclusive the NR got inverted forks (even the Blade and RC30 didn’t have these), magnesium wheels and specially made four-piston brake calipers with ‘NR’ marked on them. Then there was the dash…

Not many people get excited about an instrument display, but the NR750’s clocks are something else. The LCD display not only has a carbon fibre surround, it is ‘floating’. By using a mirror to reflect the digital image it appears in ‘infinity’ to your eyes, meaning you don’t have to re-focus on the display when you glance down. How clever is that?

The final touch, and one that any NR750 owner must love, is the key. Every NR came with a nickel silver key inlayed with a carbon fibre NR logo. Money can’t buy these kind of touches. Well actually that isn’t true, it can, for about £100,000 you can get a key (as well as an NR750 to go with it) because that is currently the going rate for one. How this will compare to Honda’s eagerly awaited MotoGP bike for the road is something we will just have to wait and see, but no matter how exclusive the road-going GP bike will be, it will never top the sheer technical brilliance of the NR750.