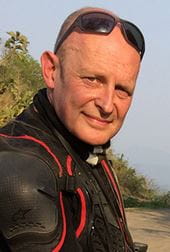 By Jim Bowen
From California to Kuala Lumpur, Jim Bowen has tested and abused bikes on road, track and trail for the last 25 years. He spends most of his time working behind the scenes for motorcycle manufacturers on various interesting projects but is lured away from secretive tests and photo shoots whenever a new and interesting route appears in the adventure travel world. 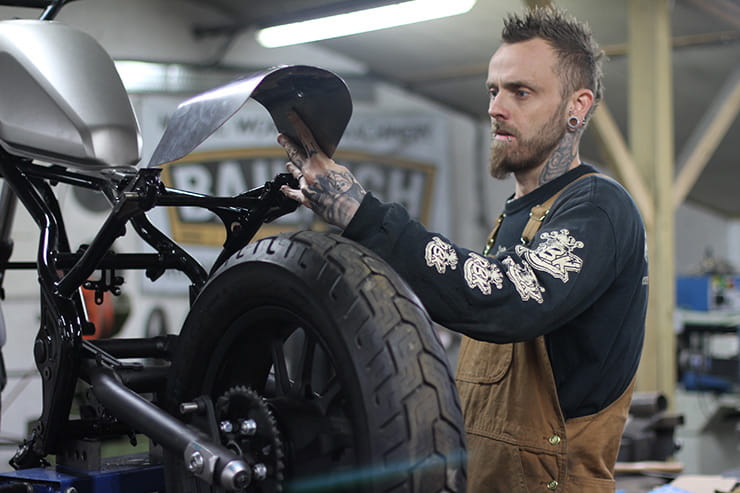 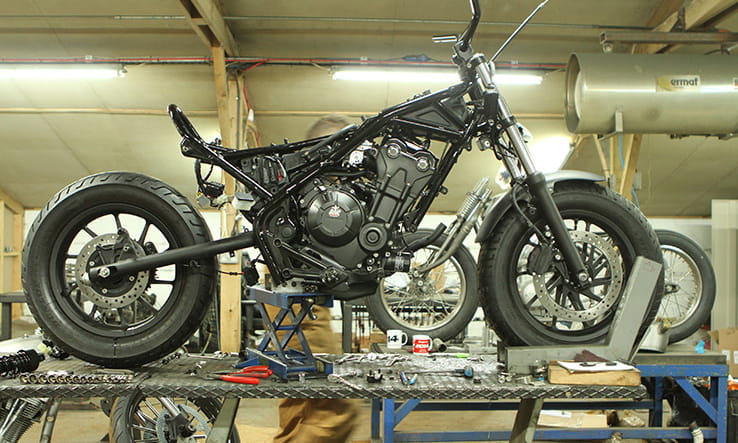 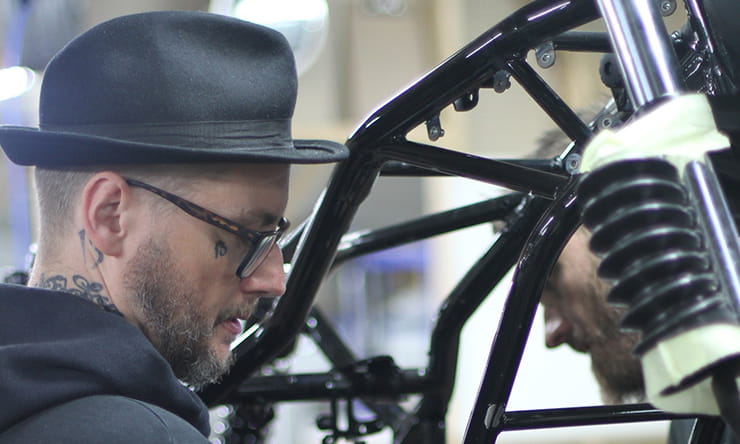 I sent Honda a sketch of this urban survivalist bike straight out of The Walking Dead. They phoned me and said “Okay, go ahead and build it.”
Dan Gold

Deep in the heart of West Sussex, a creative collaboration is born and a highly secretive custom build begins. BikeSocial was allowed exclusive access to the project.

Two creative masterminds. Famous tattooist Dan Gold and acclaimed bike builder Russ Brown of RBKustoms have been given the green light and a CMX500 Rebel from Honda. Their mission is to build Dan’s interpretation of the Rebel using the donor bike. Their deadline is completely unrealistic,   they have never worked together before and the bike has to be ready for The Bike Shed in 22 days from now. Both are known to be innovative artists with a love of ink and wheels, but under huge pressure could this meeting of minds go horribly wrong?

Dan Gold: Dan opened his first tattoo shop aged 21 and revolutionised the form by fusing graffiti with tattoo art. He became famous tattooing the stars following the success of the TV show London Ink. Dan is familiar with the glare of the media spotlight and owns and runs the Monster of Art tattoo studio.

Russ Brown: Russ is the owner of RBKustoms who supply bespoke builds including Harleys to customers of Warrs in London. He was inspired to start building himself after watching American Chopper.  Russ is familiar with the glare of the workshop strip light.

Honda CMX 500: The Rebel is the cheeky new addition to Honda’s Street range. Being A2 licence friendly and easy to ride, the baby bobber is aimed squarely at the novice that wants to have fun with a dash of attitude. 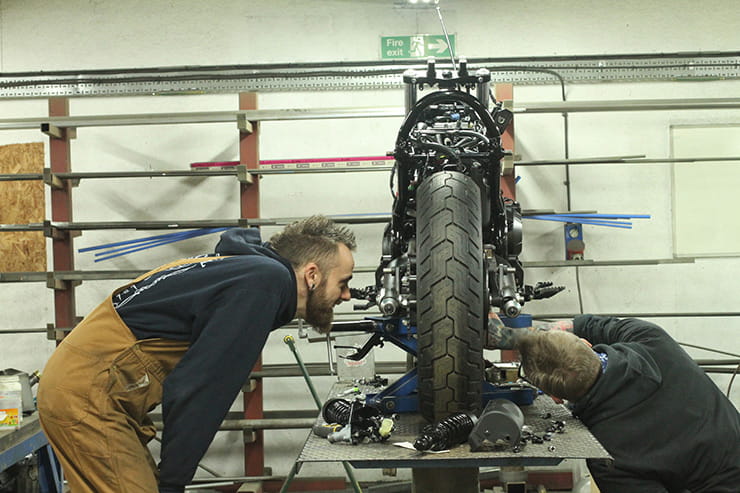 The idea was born following the press launch of the Honda CMX500 in Spain just a few weeks ago.

Dan: “I was invited out to Barcelona for the Rebel launch and really enjoyed riding it. I had the best day ever!  All the journalists loved it too. I struggled a bit with the look of it so when I got home I sent Honda a sketch of this urban survivalist bike straight out of The Walking Dead. They phoned me and said “Okay, go ahead and build it.” I told them “I’m a tattooist not a bike builder but I know a guy that could probably do it.” So I phoned Russ at RBK and he said “Yeah, okay. Let’s do it.”

Of course it wasn’t quite that straightforward as there had to be meetings about design and budgets which would duly be signed off by the top brass at Honda Europe. Dan: “Yeah, we messed around with the design for a couple of weeks and had to compromise a bit before it was signed off.”

The reality also meant that Russ would have to virtually suspend any involvement in his own business for the month of May as the Rebel would take priority over existing builds. Various bikes in differing states of completion were dotted around the workshop and Russ would rely on his hired hands to keep things moving forward. 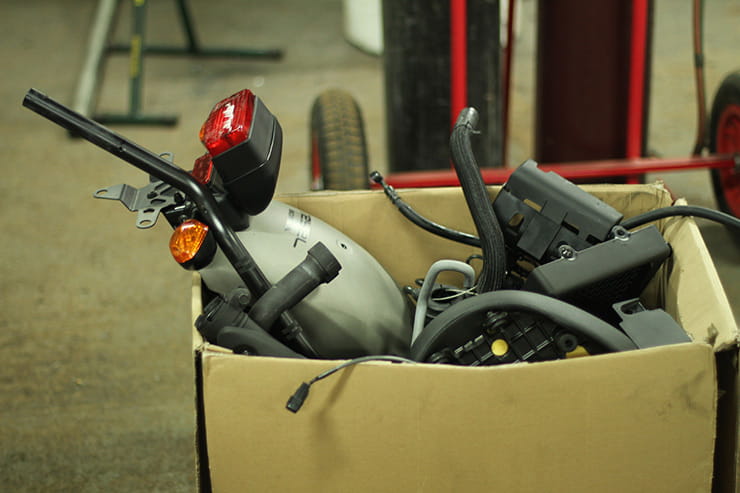 I arrived soon after the strip down had commenced. The headlight, exhaust and radiator had already been consigned to a large cardboard box nearby. Spirits are high but both Dan and Russ are under no illusions as to how much of a slog it will be to make the deadline. Looking over the other current projects I can see that Russ is a perfectionist and can weld to a standard that would grace any factory MotoGP bike.

Russ: “I like looking back at what I was building six years ago to see how I’ve progressed. I can always find fault in something I’ve built which is not a bad way to be. You might not see it but I will.”

Dan: “I think it’s healthy to look back at your stuff because sometimes you can be your own worst critic and it can take a few years to realise that what you did back then was actually quite good.”

Dan has a long history with bikes and is no stranger to tinkering. “I’m really quite good at taking things apart. I’m not so sure about the reverse process but Russ is here and he’s used to ridiculous deadlines. There’s gonna be lots of late nights but we have to finish it. There is no plan B.” 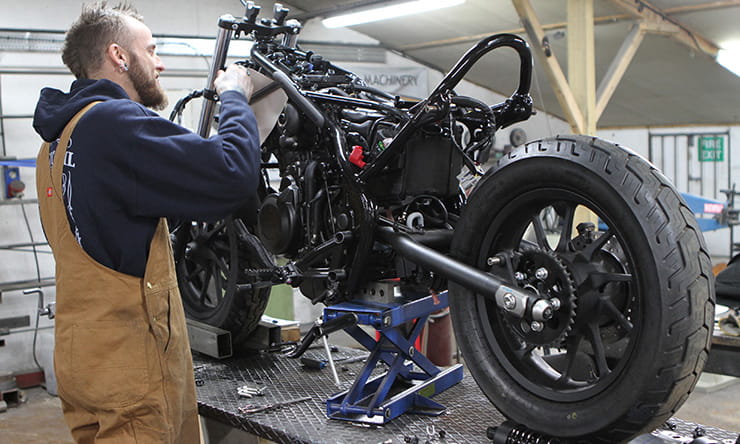 David Rogers, the PR Manager at Honda also paid a visit during the initial strip down. “I was there on day one and it soon became known as The Divorce Bike because they realised they would only get it done if they stayed until midnight every night. The guys from Honda Europe liked what Dan and Russ were doing and told them to get on with it. They would pop down and say yes and no to a couple of things but it was always very much Russ and Dan’s project, not Honda’s.”

As the little Rebel is reduced to its undergarments – rolling chassis and motor – it becomes easy to see the customising potential for the bike, and how Dan could see the BMX DNA in his own initial ideas. “I basically came up with a BMX/skater tribute bike aimed at that kind of audience and we tweaked it a bit.” 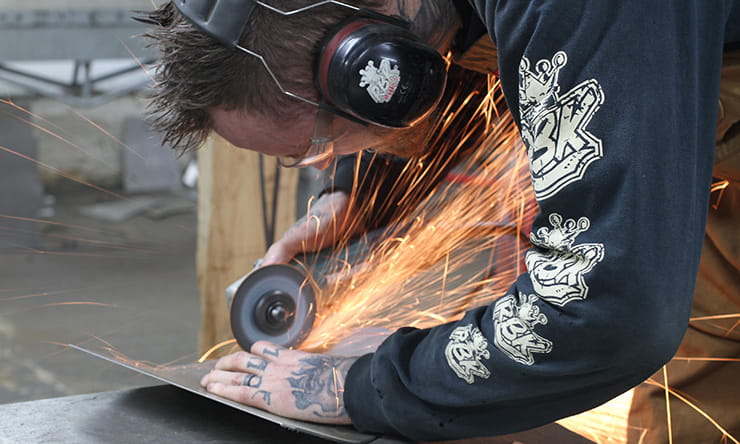 During my next few visits I watched Russ cut, hammer and weld parts for the Rebel as it began its transformation from slightly chubby 'funster' into something on the more serious side of fun. Into the box went all the parts that make it practical and legal. Yet I had the distinct impression that Dan and Russ would probably liked to have been even more ruthless if they only had themselves to please.

There is a positive buzz in the air and they are seemingly not letting the pressure get in the way of the creative process. In a situation like this, established artistic minds and strong willed personalities, especially working together for the first time, can result in a less than good-humoured alliance. You just can’t be sure until you give it a go. 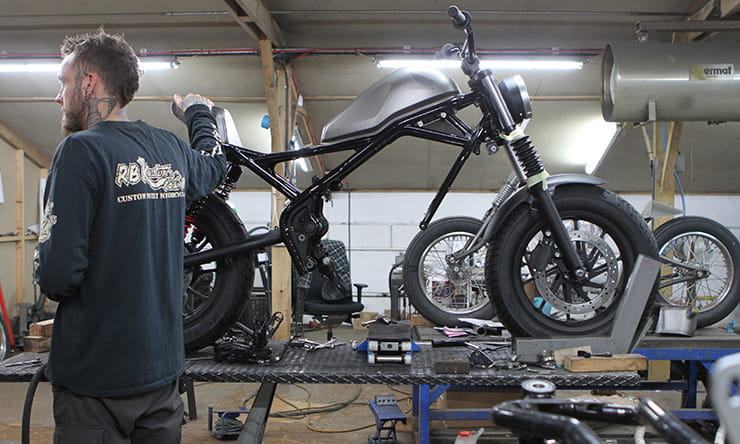 There are some incredibly effective touches to the bike. Due to time constraints it couldn’t be painted but the tank is instead wrapped using a dark wallpaper-esque design incorporating Dan’s trademark skulls. The wheels have been replaced using Excel rims and Talon hubs with chunky Continental TKC80 tyres. The sporty seat and tail piece made by Russ help give a more aggressive stance. The re-birth is nearing completion.

At 7pm on May 25th, just twelve hours before Honda are due to collect the bike and take it to London, I watch nervously as Dan frowns at the bike while holding the unattached radiator in his hands. “I can’t see how this is gonna fit.” The radiator is supposed to mount below the exhaust manifold but the brackets aren’t right and there is plenty more work to do including rigging up the fuel can skateboard holder, fitting foot pegs and levers.

This scenario takes my mind back to American Chopper reality show and their weekly crisis points, though this workshop predicament doesn’t have a manufactured fakeness to it. In the end, a compromise is made and the build is finished at around 1am with one seriously cool bike and two frazzled individuals. 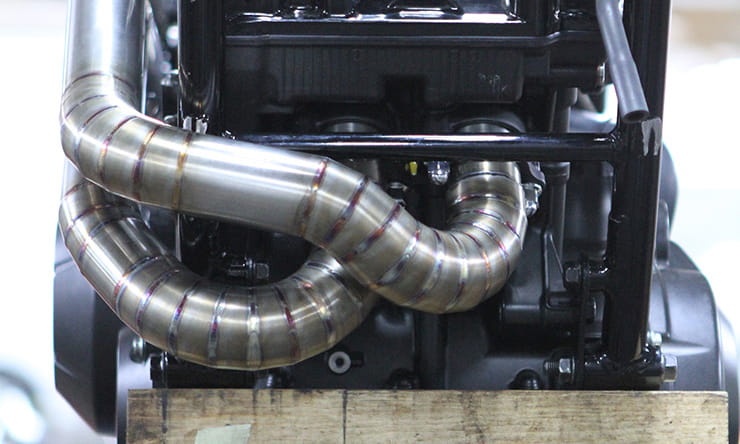 The Unveiling: As the Bike Shed visitors worked their way through the exhibits throughout the weekend, Dan and Russ were on hand to gauge response to their creation. 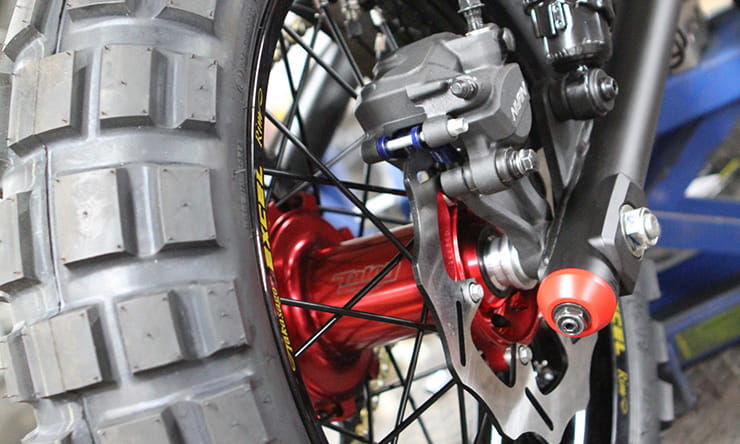 Dan: “People were coming up to me and saying how much they liked it, and many said how much it reminded them of their BMX bikes which was great. It was surprisingly closer to the original concept than I expected. Yes there were a few changes from my original idea but I think we really managed to capture the essence of the first idea which is freedom, and the first time that you had fun on two wheels.”

Russ: “It took 22 long days in the end. The biggest worry for me was not the build but making sure the parts turn up on time. Everything we were doing was pretty much under control but when parts are late or they send the wrong stuff it can ruin a project. In the end it went okay. We had a couple of technical hitches but nothing major. Me and Dan worked well together so I’d be up for doing another build with him.” 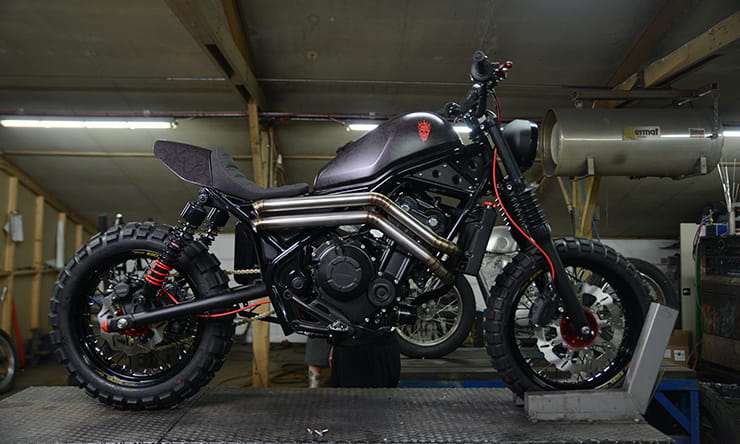 Russ is now an old hand at bespoke building so how does Dan feel having given birth to his first custom build? “The whole experience was so close to doing a custom tattoo because you first have an idea, put it down on paper and then work out how to realise it. Somewhere along the way a machine comes to life, like Frankenstein!

The biggest challenge for me was making sure it all came together harmoniously and didn’t look like a bike that had a few parts bolted on it. I’m really happy with it. In fact I’d like to build one for myself. It would be such a hoot to ride around London!”

Dan has now inked a bike live at the NEC for Honda, designed his and Honda’s first custom build and is discussing a bike project for Ann Summers. It’s safe to say that his collaboration with Russ has been a successful one and who knows where it may lead? Maybe one day soon we’ll see Dan Gold custom kits built by RBK for your bike. 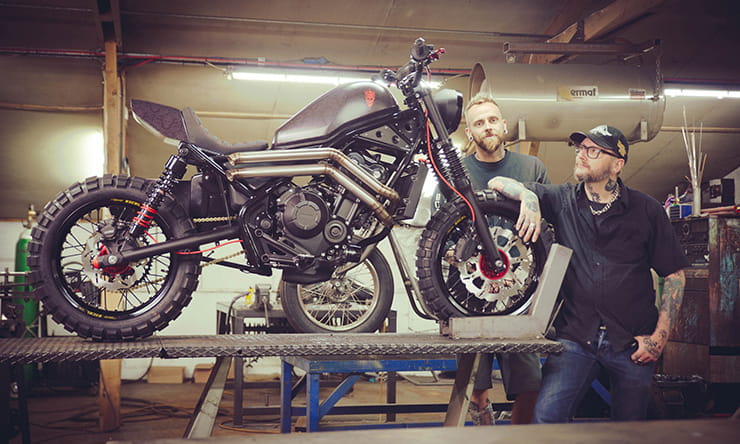