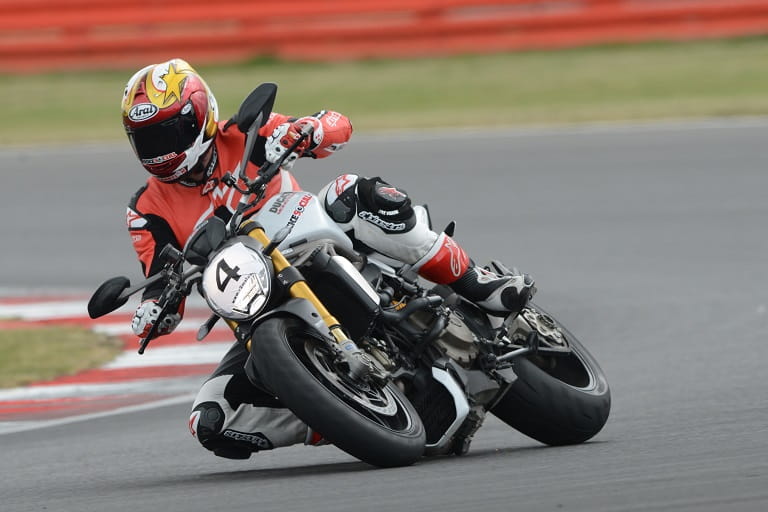 Ducati Monsters have never really been designed for track use, but that didn’t stop us trying out our long-term test Ducati Monster 1200S at Silverstone on an exclusive Ducati track day last week.

Go to most motorcycle track days and you could be forgiven for thinking you’d made a wrong turn in to a superbike race paddock instead, rather than blokes looking to stretch the legs of their road bikes on a circuit.

Many now have ex Superbikes, the kit, the motorhomes and the tool chests to match and there’s a breed of professional track day riders, who never actually go and seek the glory of actually racing, but prefer to dust up slower riders on track days for kicks instead.

So it was with some surprise that out of 200 blokes who had paid their money for a go at Ducati’s Silverstone track day, plenty had arrived on road bikes complete with indicators, lights and mirrors, rather than the usual race brigade you’ll get at many tracks on Monday to Fridays. Blokes who ride Ducati's might sometimes be seen as slightly pompous, but I found the opposite true.

Even better was that we didn’t arrive with the latest race-spec superbike – but our long-term test Ducati Monster. A bike that all of the Bike Social team has fallen in love with every time they ride it. From the Ohlins front and rear suspension, to the quick-handling and that grunty 145bhp V-twin motor, it’s a delight every time I’m lucky enough to pull it out of the shed.

So, fitted with some new Bridgestone S20 Evo tyres, a full tank and a set of leathers, we hit Ducati’s track day at Silverstone.

What’s great to see is that although the fast group had plenty of race bikes in it, there was  a whole load of other bikes in the paddock from a mint Ducati 851 to a Multistrada adventure bike, and everything in between.

Even Foggy was at Silverstone and admitted he was nervous, hadn’t been on a road bike for a while, and couldn’t remember where the track went. To be fair he hardly looked slow, I guess a four-times World Superbike Champion never really slows down. 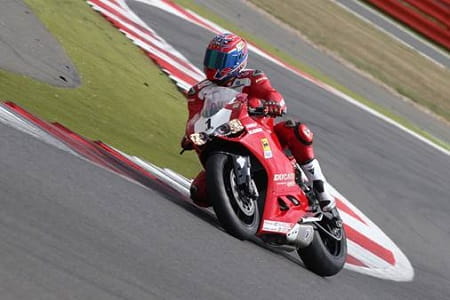 But on the Monster I suddenly felt like there was no championship to win, no race, just me, the full Silverstone MotoGP circuit and the Monster 1200S.

Engage Sport mode on the Monster and the speedo becomes smaller and the clocks are taken over by a race-type dash which means you get to focus on the rev-counter and not much else. The setting also increases the sensitivity of the throttle, gives it a more aggressive fuel map so that you get 145bhp faster, and turns down the traction control and ABS to allow the tyres to move around slightly when you’re on it.

All of these settings can be adjust individually too, depending on rider preference. Other than dialling in a couple more clicks of compression on the rear shock, I left everything else as it was. I never went along to Silverstone to win a trophy remember, just to enjoy the track, the people, the bike and the atmosphere. 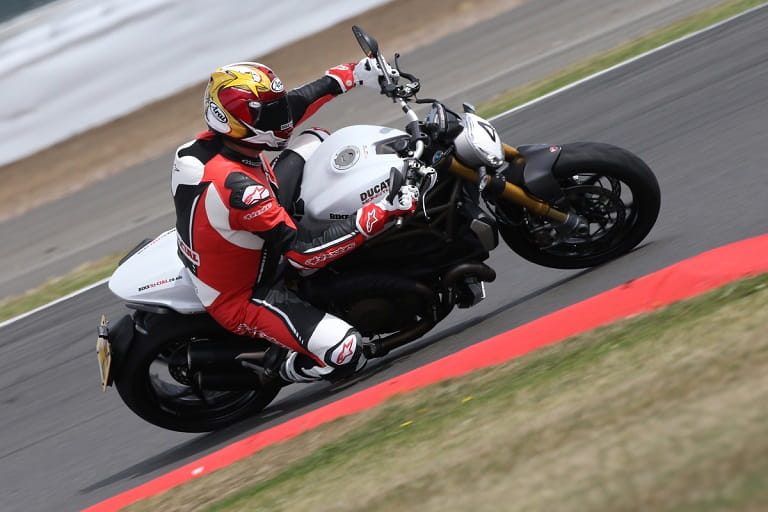 The truth is that the Monster is a fast cross-country hack. On track it starts to get a bit vague, but as we said, it’s never meant to be a track bike. The ground clearance is good considering, but gets to the point where an exhaust valve cover starts to scrape and you know there’s not much more corner speed or lean angle left.

One area where the Monster is brilliant on road and track is the brakes. Even with the ABS on it barely ever kicked in on track and ensures the Monster stops as fast as any sports bike. It turns quickly too. Mid-corner means that you haven’t got the feel or clearance of a modern sports bike, but it’s not too bad.

And then on the gas the bike hits hard, making full use of the traction control as it subtly chimes in. Like I say, it’s no track bike, but is more than respectable. The California Superbike School instructors use them a lot and have no problems keeping up in the fast group.

After a couple of sessions I managed to get my hands on an 1199S and admittedly the whole world changed. That bike has some of the best power and handling characteristics of any modern superbike, so it’s hardly a comparison. But you know what, the Monster certainly didn’t shame itself and I’d happily take it on a twistier track if I get the chance again. What a laugh!

Next up for the Monster 1200S is a tail tidy to really make the most of that rear-end, and lose the big mudguard that sits out of the swingarm and round the rear wheel, and a screen to help the bike when we use it for bigger trips.

We fitted a set of Bridgestone’s brilliant new S20 Evo tyres once the standard fit Pirelli Diablo Rosso had seen better days. As previously reported, the Pirelli’s suit the bike really well, but at 2500 miles the rear tyre needed replacing.

We opted for a set of Bridgestone’s new sports S20 Evo tyres. They’re a hypersports tyre and available for most bikes from 140 rear section up to a 200-section rear tyre.

Initial feel would suggest that they warm up quickly, and make the Monster turn faster than the Pirelli and its fairly lazy profile. That’s offset by making the bike feel a touch more nervous at high speed on the road. You make your choice I guess.

At Silverstone the tyres have far more grip than the Monster can demand. They improve front-end grip no end which on a naked bike with not the most ground clearance is a very good thing as you find yourself waiting in a corner before getting on the gas.

On the power there was never any movement from the rear end, just a nice gentle black line as the Monster made its best way out of the corner and laid down its 145bhp. I’ve barely used them on the road yet, but would say that they definitely improve the Monster’s sporting credentials.

Thanks to Picman, Bonnie Lane, and Ducati UK for the pictures.