How motorcycles play a vital role in preventing Ebola outbreak

In March 2014 the current Ebola epidemic first raised its ugly head in the West African countries of Sierra Leone, Liberia and Guinea. According to the World Health Organisation 14,000 have been infected and 5,000 people have died since. The disease has even been registered in the USA and Spain but we investigate how Riders for Health are using motorcycles to help not only prevent the spread of this dreadful disease but also to educate and protect the communities who are so far off the beaten track that many have never seen a health care worker before. 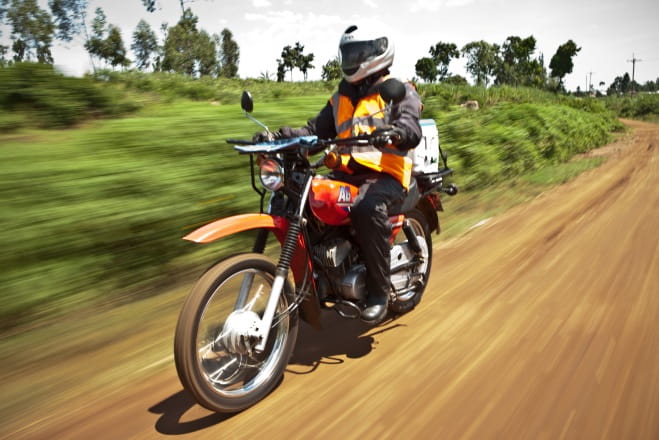 We spoke to Riders for Health co-founder and CEO, Andrea Coleman, about the work they are already doing through seven African countries and how that infrastructure and model works so well that Ministry of Health’s from other surrounding countries are now looking to implement it. We also spoke about which motorcycles are used and how the riders are maintenance trained.

Ebola virus disease (EVD) is a severe, often fatal illness in humans. The virus is transmitted to people from wild animals and spreads in the human population through human-to-human transmission.

They weren't able to identify and then isolate cases quickly enough

‘The Ebola virus both currently and in the past is controlled if you have a strong public health infrastructure in place and countries that have been affected are first to admit that what's happened here is their public health systems have been overwhelmed. They weren't able to identify and then isolate cases quickly enough.’ President Barack Obama.

The outbreak of Ebola is a disaster for the countries already affected, but it also requires all countries in Africa to be vigilant.  With good monitoring and quick response Ebola can be contained, as has been shown in Nigeria and Senegal. But one of the biggest problems faced by Liberia, Sierra Leone and Guinea is a lack of any means of reaching the most rural communities with treatment, surveillance and education.

“We have a model that works in The Gambia (also in West Africa) that allows us to access every man, woman and child with the health care they need. In fact before the Ebola crisis, Sierra Leone and Liberia wanted to look at our work with that model to replicate it. Now that the Ebola crisis has taken hold, we’re hoping that public health will be more of a priority for the millions of people living remotely because that’s what they need; not only cure but also prevention and awareness. It should encourage a shift in thinking but it can only be done by motorcycle, it makes it possible but people must understand that maintenance is absolutely key.” 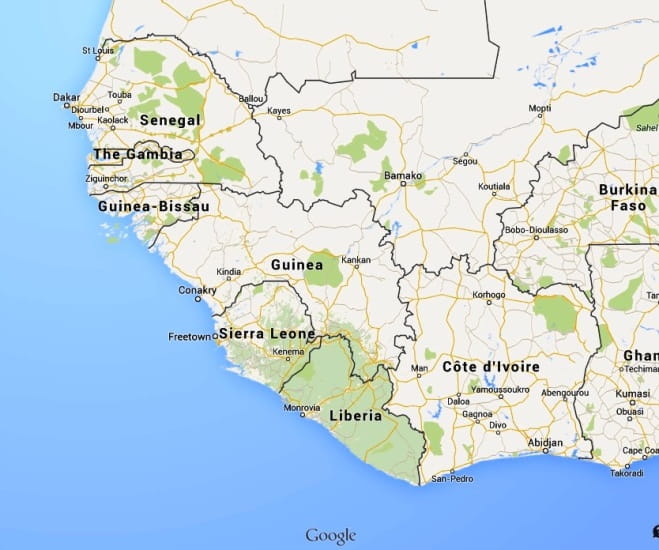 Riders for Health was set up twenty five years ago by husband and wife team Barry and Andrea Coleman with ex-Grand Prix winner Randy Mamola with the reason behind it being down to the trio seeing the remote communities in Africa not getting the right kind of healthcare.

“Whether it was to do with family planning, vaccines, prevention of disease or simple public health information like improving education about clean water supplies or washing your hands, which is difficult to do when you’re carrying water for great distances, one of the reasons why we started this is because we knew that motorcycles could access very remote areas in the way no four wheel vehicle could do.”

Riders weren’t the first organisation to put motorcycles into Africa in healthcare programmes but they were the first to make sure the bikes are constantly maintained and never break down. 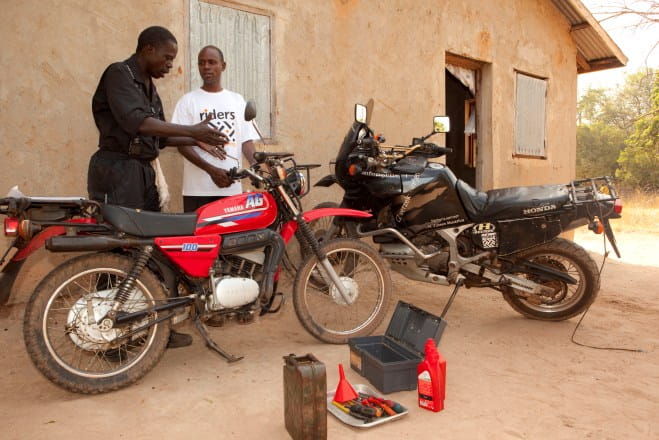 “So we make sure that riders are highly trained motorcyclists both in terms of their technical management of the machine and also their riding skills.” Andrea continued.

“The training puts the emphasis on the healthcare worker being confident that their motorcycle will get to their destination and back again. It changes their view psychologically because all of a sudden their attitude to their job changes, they become proud of being able to reach communities who have never seen a health worker.”

The charity are also responsible for building sample transport systems where couriers who are not health workers but are people who Riders employ and train can get to very remote areas and from health centre to health centre picking up specimens, getting technicians to analyse and diagnose before returning with the reports. All of this is only realistic and achievable because the motorcycles are the only form of transport that can access some of the remotest parts of the world.

Which bikes are used and how are the riders trained?

The Gambia and Lethoso are the two countries where Riders for Health have their biggest national presence and where they’ve been working with the Ministry of Health to help plan to prevent Ebola arriving. The Gambia has been declared Ebola-free after a couple of cases. The health workers across the whole of The Gambia are mobilised with basic, simple motorbikes; the Yamaha AG100, a two-stroke, and the AG200, a four-stoke, which have been on the fleet for a very long time though they were originally designed for sheep farming in Australia…and aren’t available in the UK.

“They’re very sturdy little bikes and actually when we do our Experience Africa ride in Zambia we have seasoned bikers look at these little bikes and say “I’m not riding that” but by the time they’ve finished the off-road ride, they love them! They’re perfect for the trip and they are especially perfect for the female health workers who ride them, they’re low not like normal high off-road bikes. They have enclosed chains, clutch and brake lever protectors and they’re fairly low-tech, there’s nothing fancy so they’re good to maintain and good to ride.” 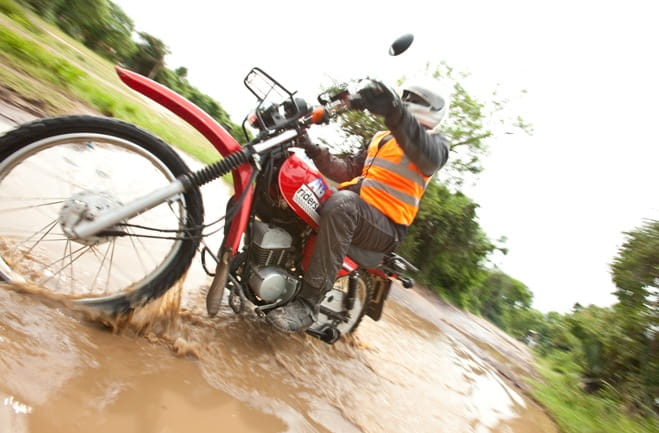 All the health workers who ride, work for the Ministry of Health and are trained by them but Riders for Health also train them to do their daily maintenance on their motorcycles. They concentrate their daily efforts on making sure there are no stones in the tyres, making sure the brake and clutch cables are ok, all the nuts and bolts are tight and that the chain is the right tension. Then, trained technicians, on an outreach basis, take a service station to the riders to do the next module, more than just the daily maintenance.

“The very first motorcycles we used, some 25 years ago, was a very good Kawasaki which had a very similar spec to the Yamaha’s but they discontinued that to long after we began. Our Technical Director at the time, along with Barry Coleman, my husband and co-founder, did a lot of research and found the Yamaha to be a very good motorcycle. We have to have them shipped from Japan because they make so few of them and they are only designed for the Australian market. Both Suzuki and Honda have donated motorcycles to us before. Honda gave us 75 XL’s into Zimbabwe in 2000, I know it was that year because it was when Kenny (Roberts) Junior was World Champion, that’s how I remember my years!”

Without motorcycles this would be impossible.

In terms of disease prevention, Matthew Hann from Riders for Health explained,

“All the health workers that we mobilise have been trained to stop the symptoms, to know what to do if they spot any symptoms, they are prepared and are screening people. Because they’ve got transport they can get to the most remote communities, they can cover the whole country. Without motorcycles this would be impossible.”

“Those who have the symptoms of the disease which aren’t spotted early enough give the disease time to spread. So that’s why hopefully in The Gambia they are better prepared. I can’t promise they won’t have a case but if they did then they are much better prepared. Obviously today we’re talking about Ebola but whether it’s Malaria, Cholera, Measles or any other disease, the same principles apply – the transport is absolutely vital to improve the protection across all of these countries.”

One of the things that health workers are trained to check every day is that they have enough fuel in the tank for their journey. One of the parts of Riders’ work is to make sure there is access to fuel in strategic points such as mission hospitals. And fuel is the first step in the PLANS programme that Barry Coleman developed to help health workers remember the basic, daily steps they need to take:  Petrol, Lubricants, Adjustments, Nuts and bolts and Stopping.

What does the future hold?

Riders  are now talking to the Ministry of Health departments for the countries affected by the Ebola crisis about how they can put their systems in place for the long term, not just for this crisis. This transport infrastructure, particularly with motorcycles, is the most appropriate for the environments where there are virtually no roads and certainly no petrol stations or service stations. It is quite simply vital to get healthcare both preventive and curative to those remotest of areas.

“We’ve really spent a long time to prove our concept that this enables access to healthcare for millions of people. 86% of people living in Africa live rurally. Most live very remotely indeed so access to those people for healthcare that we take so much for granted is what Riders for Health has set out to do. But you have to do that with well-maintained motorcycles and well trained people to manage and ride them.”

How can you help?

Needless to say, even small and regular donations help Riders for Health achieve what they achieve. What the charity doesn’t need is donations of old motorcycles. Standardised machinery is very important and it has to be appropriate to the environment. 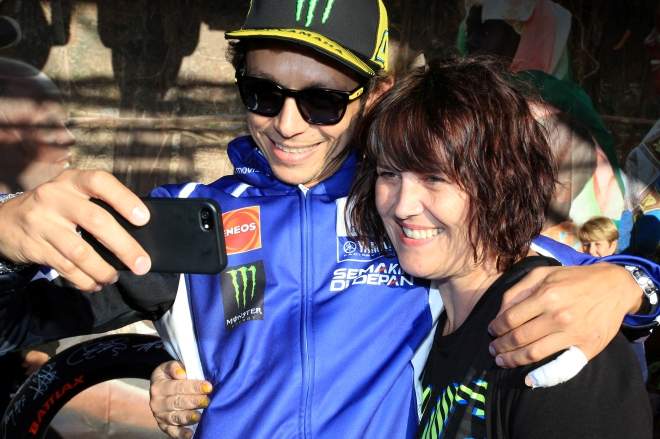 What is important is to show that motorcycles save lives. A point highlighted when Andrea recalled when they first came into the global health community and the people in Washington DC and Geneva asked “what are you funny motorcycle people doing here? We’re all biochemists”. Nowadays they realise actually motorcycling has a real place here, the technical aspect of getting somewhere predictably and reliably is so important.

Andrea wrapped up by saying,

“We’re proud that what we do is promoting motorcycling globally, it stemmed from MotoGP and they support us with the Day of Champions, an idea from Kenny Roberts Senior, and we also have our auction at Motorcycle Live at the NEC.”

***If you make a donation before 28th November 2014 to Riders’ appeal, your donation will be matched pound for pound by the UK government***