Perfectly coiffured facial hair: check. Plaid shirt: check. Flat cap and thick-rimmed glasses: check. Then you're good to own a Scrambler. But which one? Here are 10 alternatives to the all-conquering Ducati. 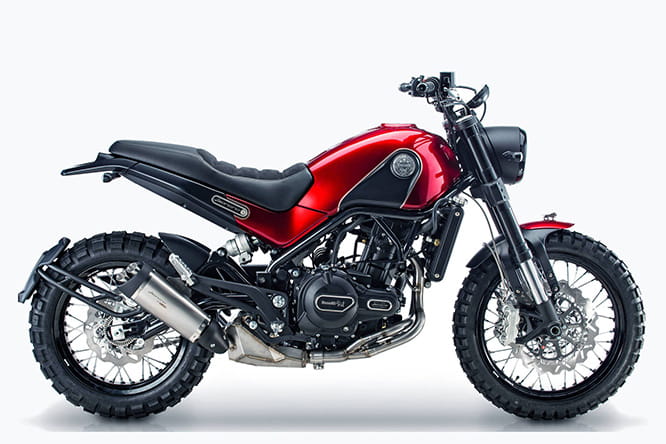 All-new scrambler-styled machine from now Chinese-owned Italian brand was unveiled at November’s EICMA show in Milan alongside a new, similarly-powered, adventure bike. At its heart is an all-new, liquid-cooled, 500cc parallel twin producing a claimed (and A2 licence-friendly) 47bhp at 8500rpm. Frame is a tubular steel trellis, there are 50mm inverted telescopic forks up front, a horizontally-mounted single rear shock, 19/17in spoked wheels while styling bears more than a little similarity to a certain bike from Bologna. Price and availability have yet to be announced. 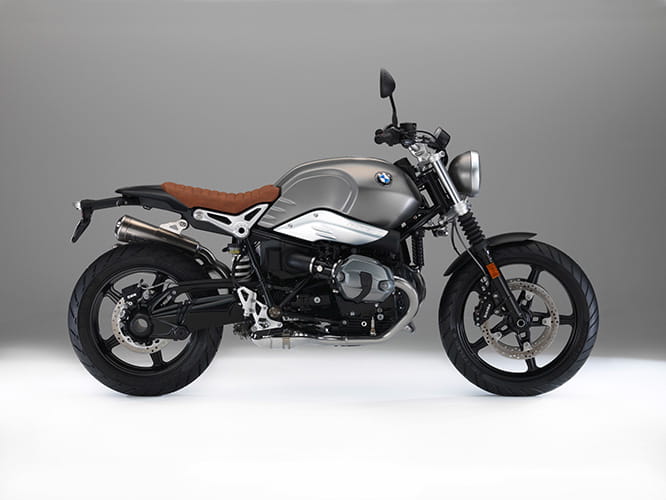 New ‘scrambler’ version of popular RNine-T retro roadster comes with a more basic spec (eg a steel instead of alloy tank) and is intended to be more entry-level and affordable. Accordingly it has cast rather than spoked wheels (the front now a scrambler-style 19inches diameter rather than 17), conventional forks (complete with rubber fork gaiters) instead of more sophisticated inverted items, more basic headlamp and so on. It also gets an off-road style raised exhaust and pegs plus higher bars. It’s due September for ‘around’ £10,000. 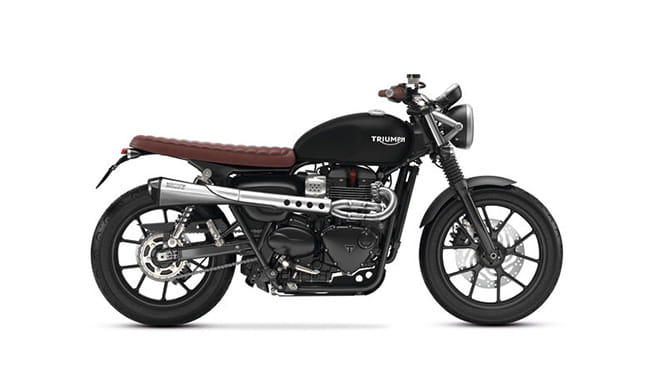 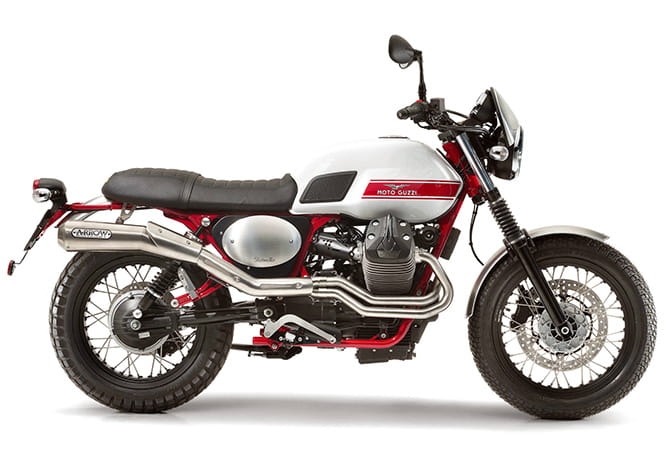 Also new-for-2016 is the long-anticipated ‘scrambler’ version of Moto Guzzi’s popular V7 retro roadster. Based on the latest V7II version, which features a more angled engine, ABS etc, the Stornello has all the required retro scrambler styling cues, namely: wire wheels shod with semi-knobbly tyres, 2:1 high-level exhaust, ribbed seat, race plate-style side panels, high bars and more. It’ll cost £8499 and is due in the UK in March. 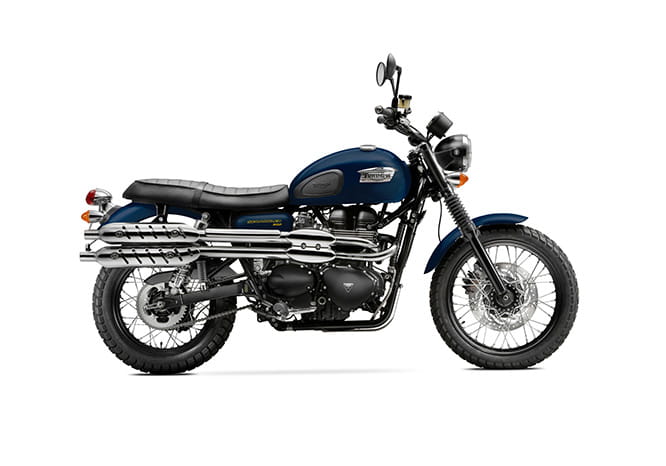 Considering the fuss over Triumph’s all-new 2016 Bonneville family it’s easy to overlook the fact that the British firm’s ‘old’ Bonneville-based Scrambler remains in its line-up – at least for the time being. Introduced much later than the stock Bonnie and subsequent Thruxton it pretty much set the template for the breed, complete with semi-knobbly tyres, high-mounted twin exhaust, wider off-road bars etc. Priced £7899 (but increasingly likely to be discounted) it’s still a tempting proposition. 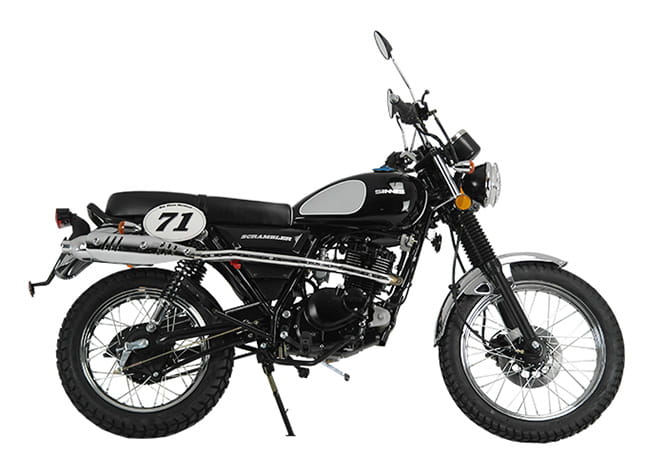 Chinese-built (to British design), air-cooled 125 was launched last year and makes up for in value what it lacks in authenticity and performance. With just 11.5bhp and a fairly basic twin shock chassis it’s not going to win any races any time soon, but then most learner 125s are little different, being air-cooled and twin shock suits its retro style, it has all the right scrambler bits (high pipe, knobblies, fork gaiters etc) and, at just £1695, is a fraction of the cost of some larger alternatives. 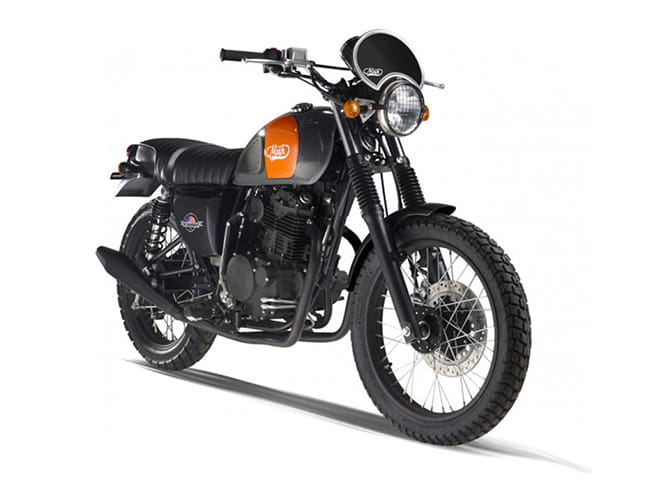 Mash motorcycles are a range of retro-style lightweights built in China (by Shinray) to a French design. Its 400s are its latest (and biggest) offerings and are now available in the UK, both using a 29bhp, five-speed variant of Honda’s XBR500 engine from the ‘80s. There’s the roadster RoadStar, at £3799 and now the scrambler-styled DirtStar at £3999, complete with the usual high bars, knobblies and more. Nicely done, though. 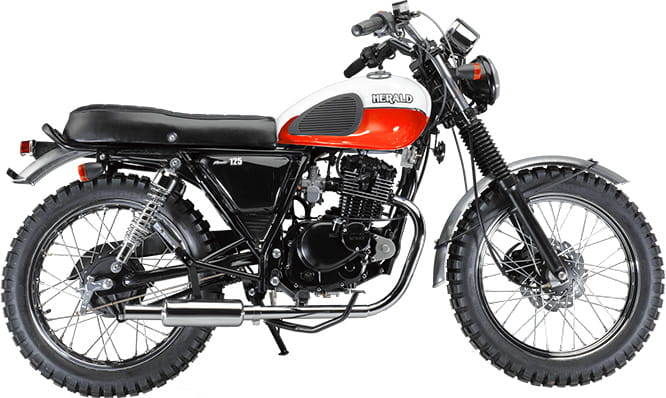 In a similar way to French-based Mash motorcycles (see above), British-based Herald have created a range of retro-style lightweights built in China to their own design but overt this side of the Channel. There’s currently the Classic 125 roadster (£1699), more cafe racer styled Classic 250 (£2750), and now, as styled by customizer Benny Thomas of Mutt Motorcycles, the new Mongrel 250 bobber (£3950) and Desert Racer 125 scrambler, which is priced at £2750. 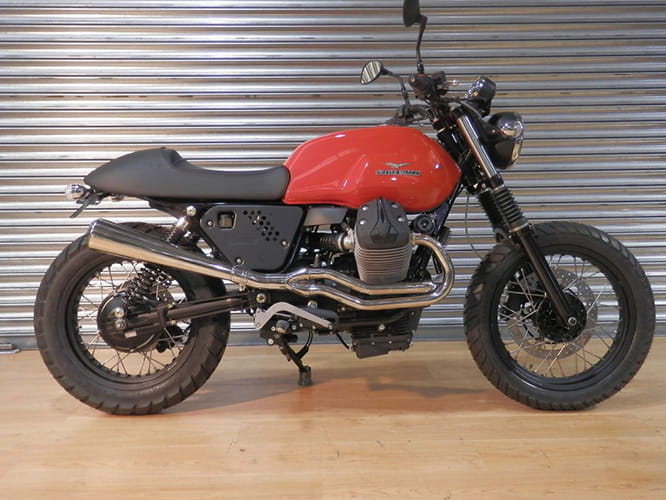 Moto Guzzi took so long coming up with its official, factory V7 scrambler (see above) that a number of few specialists and dealers took it upon themselves to come up with their own. In the UK, one of the most active of these is Guzzi specialists Moto Strada of Shipley, West Yorkshire, who offer brand new, bespoke customized V7 scramblers and others, often using parts from Guzzi’s own V7 accessories catalogue, for example an Arrow high level 2:1 exhaust. Depending on spec, these start at around £8500. 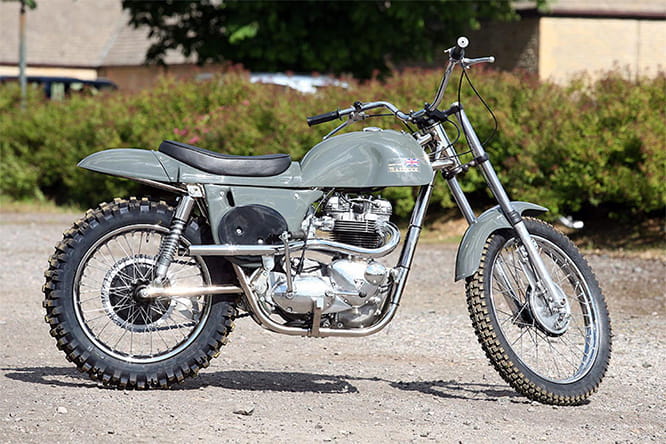 Many of us remember fondly the British Rickman scramblers of the ‘60s and ‘70s. Built by the Rickman brothers using their ‘Metisse’ frame and initially British four-stroke singles and twins (a favourite of none other than Steve McQueen) with, later, European two-stroke power. Few, however, realize they’re still being built today under the Metisse Motorcycles umbrella. Both the current Steve McQueen Desert Racer and Hammer Mk3 are new builds using reconditioned Triumph 650cc T6 engines. Price is around £15,000.