Why 2017 is the year of the scrambler 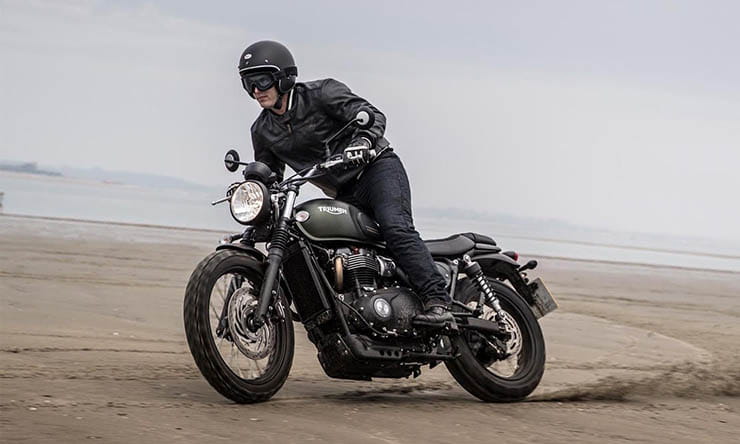 It started out as a bunch of blokes hanging out in the Mojave desert in California, or a muddy field in the Midlands, during the Fifties and Sixties. Guys who wanted to ride on trails and on scramble tracks took 650 twins and 500 singles, stripped them back and stuck on a set of knobbly tyres, an engine bash plate, and a set of high bars and taller shocks. Scramblers were invented.

What began in the Forties and Fifties with road bikes kitted up to take on the dirt, went on to bikes like Triumph’s 650 twins in the Sixties. There were Moto Guzzi twins and Ducati singles but by the mid-Seventies Scramblers had all but died out, as full-on trail and motocross bikes with incredibly tall suspension took over.

The Yamaha XT500 was perhaps being the perfect example and a massive success as a road bike. Bikes like the XT and the XL500 Honda meant that people no longer had to make their own scramblers at home, you could walk into a dealership and buy a pretend motocross bike with lights.

Scramblers have been ticking away nicely on the retro classic scene for a few years with some incredible bikes coming out of the UK from the likes of Spirit of the Seventies, Old Empire Motorcycles and BMW-based bikes from builders like Kevil’s Speed Shop. But in 2016 and 2017 the Scrambler is back in the mainstream in a big way. Anything that has a stripped-down look and a set of knobblies is now a global phenomenon.

Arguably, Triumph brought back the whole vibe in 2006 with the Triumph Bonneville-based Scrambler. Though heavy and compromised with an exhaust that burnt your right leg, it was a massive success for them and their accessory department.

But it was Ducati that made the breakthrough in 2015 with the simple, yet beautiful 804cc, 75bhp V-twin Scrambler and their really irritable Land of Joy concept that really got the world to take notice of their new range. It was, and still is a global sales success. We don’t have complete 2016 figures yet, but in 2015 the Ducati Scrambler was one of the top 10 of motorcycles sold worldwide, with some 16,000 Ducati Scramblers sold in 2015.

And this year we have the new pumped and fully armed Ducati Desert Sled, the Triumph Street Scrambler and BMW’s R nine T Urban G/S. Rumours are that Norton is also working on a production scrambler too.

Add in dedicated kit designed for the retro scrambler look, like the gorgeous new Bell Moto III helmet, and 2017 is set to be the year of the Scrambler.

Taking the brilliant R nine T chassis and giving it taller suspension, a set of kahunas and some macho off-road styling, the R nineT Scrambler is a stripped-back and pure air-cooled pseudo off-roader fitted with a 19-inch front wheel and a seventeen-inch rear. It may have been created for style but is actually truer to the original GS concept of an easy going 108bhp motor that’s comfortable enough and can tackle a bit of the rough stuff should you find it. It’s on sale now. From £10,450.

A pumped-up version of the already massive selling Ducati Scrambler. This bike is based on the same steel trellis Scrambler chassis, with an air-cooled 804cc motor making 75bhp. It gets fatter 46mm upside down Kayaba fully-adjustable upside down front forks, a beefier swingarm to cope with some off-road drama, a set of Pirelli Scorpion Rally STR tyres on a 19-inch front and 17-inch rear, and a fully-adjustable rear shock.

The new suspension means it sits 50mm higher than a standard Scrambler Icon and the seat is new too, measuring in at 860mm seat height. It certainly looks the part, already evoking images of the legendary XT500 thanks to its white tank and gold wheels. We’re riding it on and off-road next month so will tell you if it’s any good then. It goes on sale now, and will be in dealerships in March/April. It costs £9395 in red or £9495 in white.

Somebody at BMW has been in the archive and fallen in love with the early, air-cooled BMW R80GS. And good on them because the new Urban G/S is absolutely stunning. Looking exactly like a simple GS for 2017, the new Urban looks like it could be the most serious bike of this lot off-road and can be fitted with proper enduro tyres on its 19-inch front and 17-inch rear wheel; too. Using a chassis based on the R nine T the Urban G/S appears to be a lot more off-road than the Café cool Scrambler. It uses a 110bhp air-cooled motor and some retro styling thanks to the big 17-litre tank and that eighties GS-alike front screen. We’ll get to ride it early next year. The Urban G/S will cost £10,550.

You can still buy a kit to turn a T120 Bonneville into a scrambler, but if you want a Scrambler straight out of the Triumph factory then the new 900cc Street Twin-based Street Scrambler is your best option.

Featuring a new chassis specific to the Scrambler, with longer rear shocks, wide handlebars and off-road style Metzeler Tourance tyres, the Street Scrambler appears to tick all the boxes in the styling stakes. It has a high-level stainless steel exhaust, off-road footrests, a bash plate and a simple middle dial as your instruments. No prices are yet available but we’re riding it in January so will give you more info then.

Loosely based on the XV950 cruiser crossed with a scrambler vibe, the new Yamaha SCR950 is designed to be an easy-to-ride urban scrambler that can tackle some gentle off-road riding, it uses an air-cooled 942cc 60-degree V-twin motor and wide off-road handlebars with spoked wheels running a 19-inch front and 17-inch rear wheel. It’s on sale now at £8499.

Remarkably Honda and Kawasaki don’t yet have anything scrambler related in their range. It still seems to be led by the European manufacturers. However, Honda came out with a CBSix50 scrambler concept based on the CB650 at EICMA last year that just may make it into production. Maybe.

Scramblers don’t have to be big, powerful bikes. Far from it in fact. If you can get a lightweight, small bike that will tackle a bit of scrambling then that’s even better. It’s built in China and then shipped over here where Herald go through the whole bike to change things like chain and sprockets, brake pads, tyres, spark plugs to ensure everything as good as it should be. We tested this Rambler 250 last year from Herald and were impressed with it. For the money you get the Scrambler look in a new rider friendly bike that’s A2-licence friendly and costs just £3500.

The Ducati Scrambler has been around since 2015 so there are a few used ones creeping out on to the market with as little as 3000 miles on them and from as little as £5000 from a Ducati dealer. Another great option is a used Triumph Scrambler. There are plenty around as they’ve been on sale since 2006, and they seem to be holding their money from what we can see as they already have a bit of a cult following. Prices seem to start at around £4500 and go anything up to £10,000 for nearly new bikes with the most desirable accessories.

Think of it as a 2000km, 11-night long trail ride through Morocco, starting in Tangier then riding down to the Atlas Mountains and back up to Tangier ready for a ferry back to Barcelona, all on scramblers. You can enter old or new scramblers, but organisers, Fuel Motorcycles, purveyor of ultra-cool motorcycle kit say that they will scrutinize entries to keep the event in keeping with their scrambler ideology. Riding in period scrambler kit is to be encouraged. More details at: https://fuelmotorcycles.eu/pages/scram-africa-scram-africa

Okay, so not exactly a Scrambler event, but if you’re into getting muddy and riding weird bikes off-road then Dirt Quake is a fantastic event to go and have a laugh, take part or just watch Everything from choppers to sports bikes get fitted with a set of knobblies and raced around the Kings Lynn Arena. It’s run by our friends at Sideburn magazine and definitely isn’t an event to forget. http://www.sideburnmagazine.com/upcoming 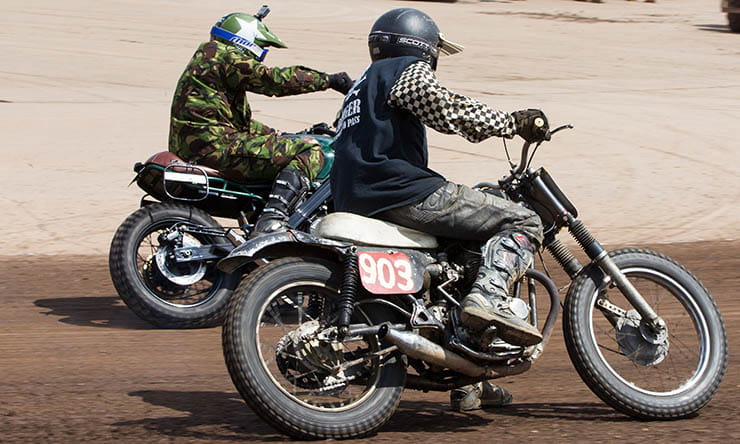 You don’t know how excited we were in the BikeSocial office when the new Bell Moto-3 helmet landed. Using the original style of the Bell Moto, the Moto-3 uses the traditional look and style made famous by Bell’s motocross lids, but features modern safety standards from its fibreglass shell so it conforms to ECE and American DOT regulations. The lining is removable and washable too. Pair it with a set of retro Biltwell or 100% goggles and you da man.

Many people forget that Alpinestars was started as a motocross boot manufacturer, before later moving into road bike boots, followed by leathers and other kit before the colossal range that Alpinestars offers now. These leather Supervictory boots pay homage to their motocross roots from the original Victory boots worn by riders like the Belgian legend Roger DeCoster, but feature modern technology like ankle brace protection and a protective steel shank on the sole. But more than that, they have a stamped steel shin plate! How cool? 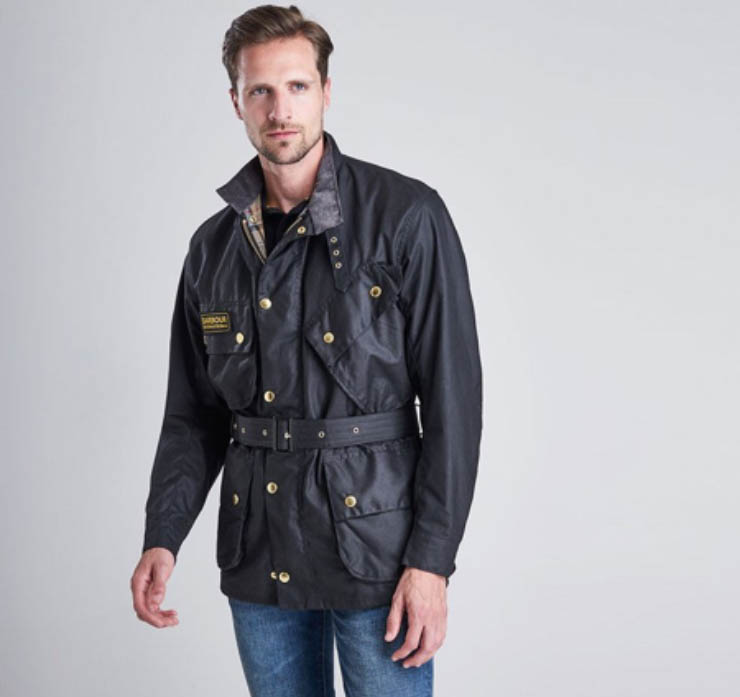 You cannot ride a Scrambler without a Barbour wax cotton jacket. It’s a law laid down by Steve McQueen when he rocked up at the International Six Day Trial (ISDT) in Germany on a Triumph in 1964 wearing Barbour. He'd bought some for the American team he was riding in during a stop off in London. That Scrambler law still stands today. The Barbour International Wax cotton jacket is the original and coolest. It’s made from 8oz Sylkoil waxed cotton with a bulky zip and a storm flap at the front. There’s a belt, and a corduroy lined collar that’s also adjustable and the original Barbour International logo on the chest.