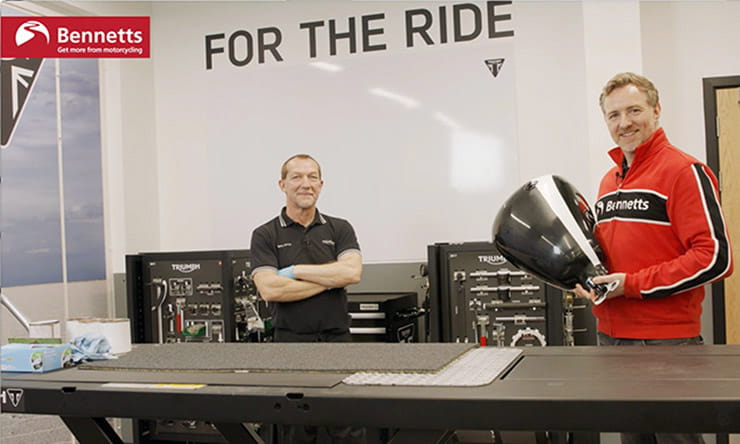 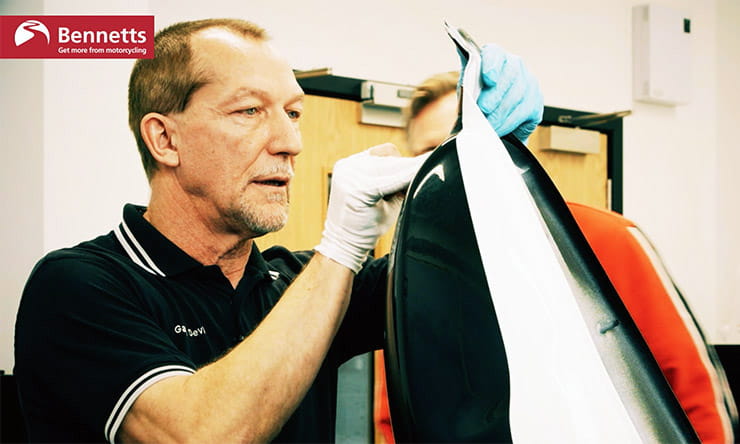 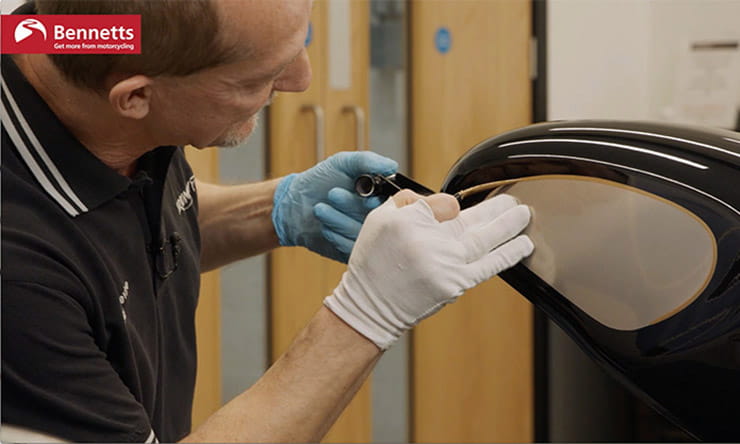 Do you own a Triumph? If it’s got any kind of detailing or a pinstripe on it, there’s a fair chance it was painted by this man. And there’s an easy way to find out; look under the front of your seat where it meets the fuel tank where there’ll be a signature. ‘Gaz D’ is his moniker, he’s been doing it for 30 years and he’s the one who trains the other five around the globe who do this role for the British marque.

He joined his father at Triumph in 1976 and says, “my working career was mapped out for me before I was born!” and that's because he’s the fourth generation at Triumph from the same family. His Great grandfather worked at the original Triumph factory in Coventry (Priory Street), his grandfather also worked on the engines, then he moved to Meriden after the Second World War. Gary’s father joined as a painter in the enamel department and Gary then joined him to work originally in the paint shop while he waited to get into the machine shop as an engineer but by the time a job came up he’d fallen in love with painting.

This passion for art stemmed from a fascination of watching the paint shop operatives using traditional methods as opposed to the transfers and decals as used by the Japanese manufacturers at that time, and even 45-years later he still likens wearing his branded polo shirt to “pulling on an England shirt” such is Gary’s dedication to Triumph brand.

Other than Guy Martin, who hand-painted the fuel tank on the customised Scrambler 1200 XE he used when attempting the Great Escape jump stunt, nobody outside of Triumph has ever had an attempt. Until now.

There aren’t many of us who want to be still working at 86 but Gary is among the exception… and he may even have the same set of brushes because even though he’s ‘only’ had his some of his current set for 15-20 years, his advice is “if you look after them and keep them oiled, they’ll last forever.”

But what are his favourite set made from? “Squirrel hair – it’s called a ‘blue squirrel’ even though they’re grey – and they come from America,” says Gary, proudly. Among the obvious attributes to being a master artist for one of the biggest motorcycle brands on the planet are a steady hand and a calm head alongside concentration and patience. Gary comes across as an uber-professional with an eye for detail and precision, he also understands the expectations of his employer and the customer, some of whom he’s gotten to know via online forums.

“We sign every tank at the base where it meets the seat. I always sign mine ‘Gaz D’ – there’ll be thousands of them around the world but I’m on a lot of biking forums and I’m amazed by the amount of people, particularly in America, how enthusiastic they are when they find out it’s one of mine!”

Even though it would take months and months to get to a level where he’d consider you competent enough to be let loose with the company’s fuel tanks, Gary’s still happy for me to have a go. 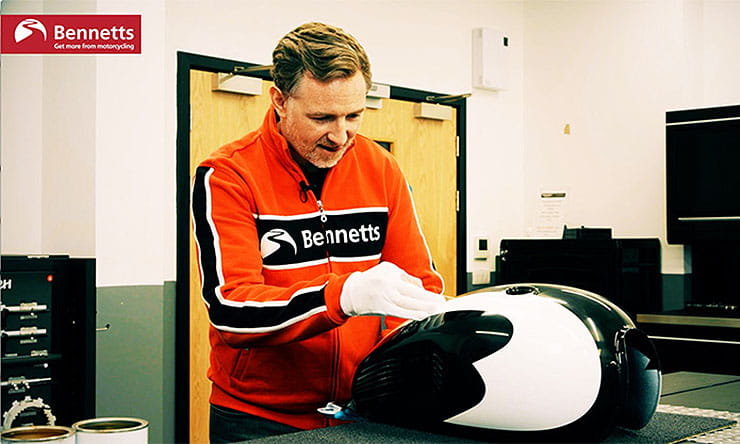 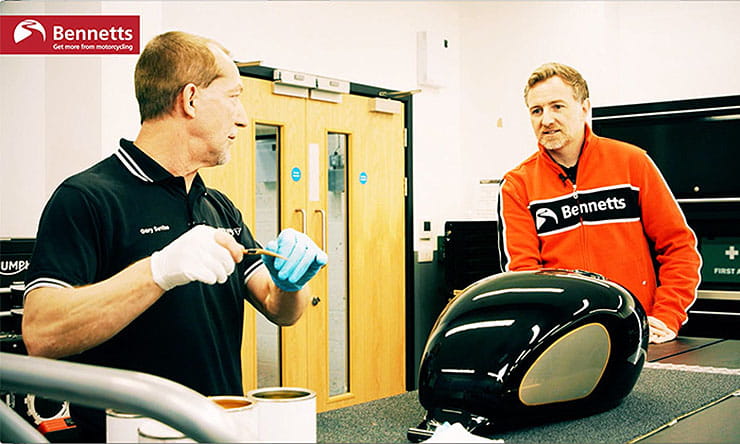 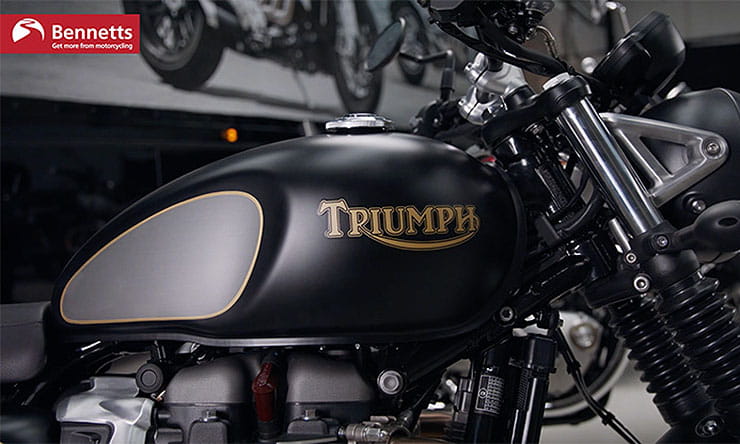 On the bench next to our ‘canvas’, sit three pots of ‘regular’ paint but Gary’s preparation technique prior to application, known as ‘palleting’, involves mixing cellulose lacquer, gold pigment and thinners together. And just like making meringues, he knows when the sticky consistency is right when those stiff peaks are formed, yet his brush appears completely wet. Mrs Livingstone didn’t teach me that in art class c.1995. Taking a look at how much paint there is on his brush on those squirrel hairs and you’d expect Gary to be mopping the floor not pinstriping a delicate and consistent 3mm thick line around a 3D fuel tank but this is why he’s a seasoned pro with meticulous standards.

In the traditional production process, once this particular tank belonging to a 2021 Triumph Street Twin Gold Line edition has been decaled and clear-coated over it arrives with Gary to apply his lines before another decal goes on before being clear-coated again. However, because I don’t have months and months of training under my belt and the only paintbrushes I tend to hold are the used ones following my four-year-old’s play, I’m to ply my effort on a test tank meaning there’ll be no disappointed owners of this limited-edition Street Twin model with ‘Michael M’ scrawled under their seats.

Donning the white cotton glove with a missing thumb and forefinger on my right hand, and I feel like a cross between Michael Jackson and a snooker referee. A medical-grade nitrile glove goes on my left for stability when holding the tank. While Gary ‘pallets’, I ask for some advice:

You can see my effort in the above video but Gary and I finish by talking about one his greatest achievements – designing the tank from the current Triumph Rocket 3 GT.

What a history, what a career.