Why Yamaha saved the 600 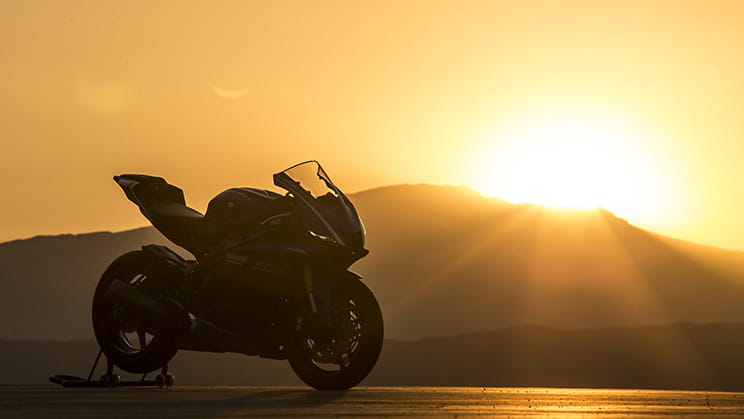 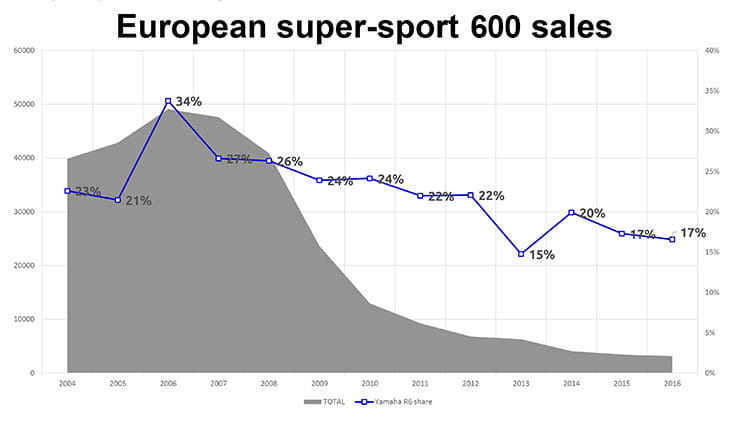 While sales of the larger capacity sports bikes also took a major dive around ten years ago, they have been recovering, if not near the explosion of adventure bikes.

Euro 4 regulations have had a major influence on many manufacturers’ line ups in 2017, and it’s no less obvious than in the 600s class, where in a hard-hit market, investment is difficult to justify. But Yamaha didn’t give up. 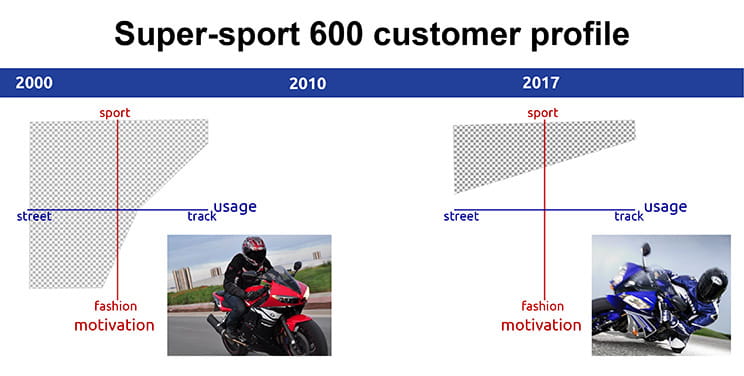 The R6’s engine’s main lump is identical to that of the previous model, besides a gear position sensor. It’s in the exhaust that things have changed to satisfy the bureaucrats, not least the catalytic converter, which has a more dense honeycomb of precious metals (limitations of space mean it can’t simply be bigger).

Injection settings and fuel mapping have been adjusted, and the air intake has been tweaked, but four-cylinder bikes like this use very high engine speeds to produce their power – the R6 for instance revs to over 16,000rpm. The problem for any motorcycle is that a catalytic converter is basically a blockage that restricts the engine’s ability to efficiently expel burnt fuel. And this one needs to be even more restrictive.

The higher the gas flow rate, the more that blockage affects performance. It’s less of an issue on a thumpy twin with its bigger, more spaced-out pulses of gas, than it is for a peaky ‘little’ 600 four that has a smooth flow of gas pumping all the time. 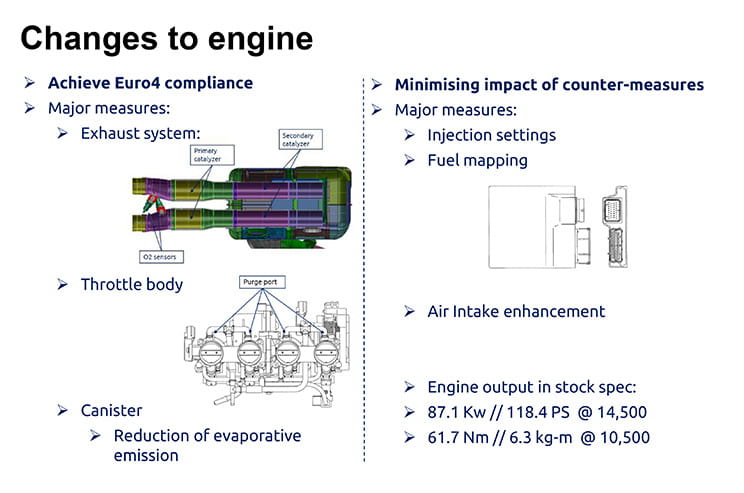 Despite all the headaches, Yamaha persevered, and while the R6 is one kilogram heavier than it was last year, keep in mind that the bike had to have a 4.5kg ABS system fitted, along with the half-kilo cat. Clearly, a lot of work has gone into the bike, and though the price has risen to £10,999, that extra £1000 is paying for bigger brakes, forks, the aluminium tank, magnesium sub-frame, ABS and traction control… not to mention the recent devaluation of the pound.

Thanks to the exhaust, power is down on last year, so knowing how hard it was to keep the R6 in the range, and given that other manufacturers seem to have thrown in the towel, why did Yamaha go to all the effort? “We see racing as a really core part of Yamaha’s DNA,” Jeff Turner, Yamaha UK’s marketing manager told us. “The R series as a concept is designed to have a bike at every key capacity level, so you can go from the YZF-R125, to the R3, to the R6 and on to the R1 and R1M. But it’s also a racing class that we’ve been involved with for 25-30 years, right back to the FZ600s.

“I think the 600 class has probably been affected by the fact that a human being is a physical size, so a motorcycle has to fit them [so you can’t go smaller]. The litre bikes have been getting smaller and lighter, so getting much closer to the 600cc class. When 600s were introduced, there was a very big jump in physical size between them and a 1000, magnified by weight, length, how quickly they’d turn and so on…

“That gap has really closed down – the R1 isn’t much heavier than the R6 [199kg compared to 190kg], but there is still a place for a 600, for a number of reasons… For a start, it’s quite a pure experience, as most people are riding it much nearer to its limits. And in terms of how it handles and corners, the chassis – which is almost the same as the R1 – handles the power of the 600cc motor really easily; it’s a really taut, sharp, precise bike that’s really fun to ride and a very different experience to riding an almost 200bhp litre super-sport bike.

“600s are quite rewarding to ride, and not just on the road; on track a 600 is a real way to explore how to get the most out of your bike – it’s quite a thrill.” 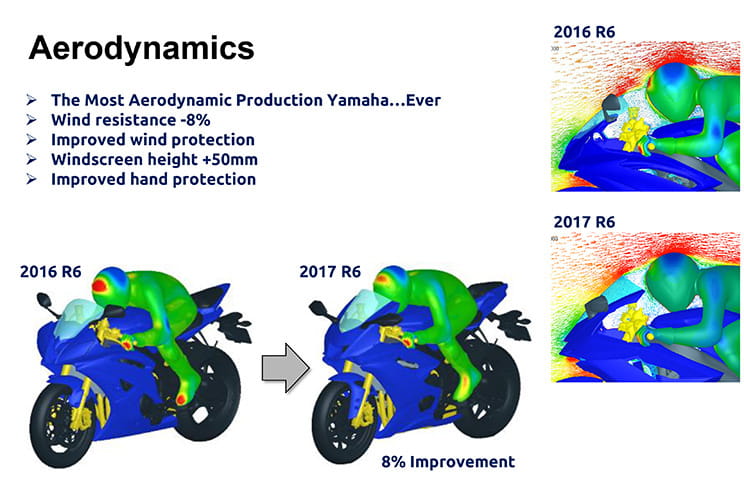 More to be had…

Strictly for race use, Yamaha does offer an Akrapovič exhaust system that eliminates the cat (and saves 10kg), along with a new ECU to change the fuelling. During the launch at Almeria in Spain, and after riding the standard bike, testers experienced the R6 with the race ECU and exhaust: “It was another 15bhp,” says Jeff, “bolted on in just a few minutes. The journalists loved it, to the point that they were up to three seconds per lap faster! They were changing gear in different places, there was better drive at the bottom- and top-end… it was like taking the cork out of a bottle.”

Yamaha’s race kit ECU includes an auto-blipping down-shifter for the standard quick-shifter, but along with the exhaust it adds another £1500 to the price (and of course, it’s strictly not for road use). Still, many buyers will likely be looking to make their own exhaust modifications, along with an ECU flash that costs from £390 at tuning specialists like www.BSD.uk.com. 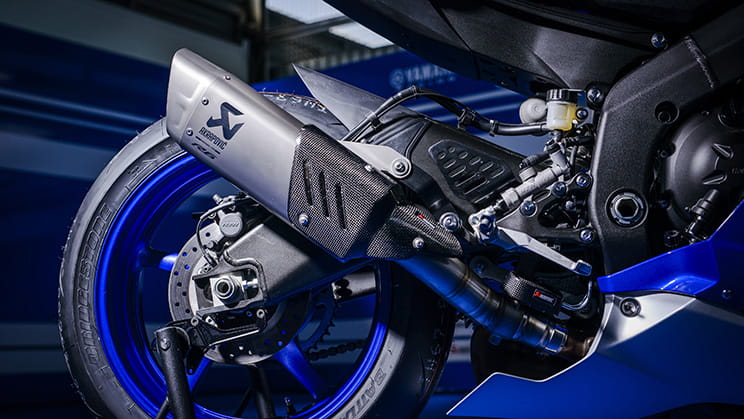