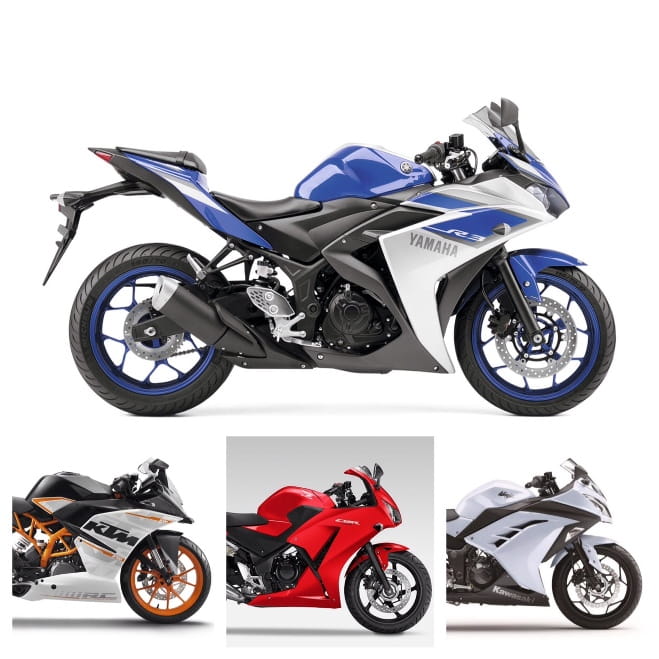 Yamaha’s R3 is the latest newcomer to the growing 300 class, ­but why?

Unless you’ve been residing under a rock, marooned in Mogadishu or abandoned in Abyssynia you can’t failed to have noticed the apparent growth of a new motorcycling class: supersports 300s.

Yamaha’s R3 is the latest to launch and its European press test takes place this weekend. So keep your eyes here at Bike Social for our road and track review.

But all of a sudden it seems sports bikes with the number ‘3’ at the front are everywhere. There’s Kawasaki’s Ninja 300 introduced in 2013, Honda’s CBR300R launched last year, not to mention KTM’s RC390 which arrived around the same time.

It doesn’t stop there either. BMW has been spotted testing its own small-bore roadster, thought to be developed with Indian partner TVS, with a full sports version also rumoured. Erik Buell’s EBR has also been heavily involved with new Indian partner, Hero Motocorp (Hero owns 49.2% of EBR), in the development of a new 250 sportsbike, the HX250R, due to for imminent launch in India with an EBR-badged version expected in Europe later. While even Britain’s own Triumph, despite very publicly scrapping a 250cc commuter project (thought set to be called the Tiger Cub and also due to be built in India) is now rumoured to be reviving the project in re-engineered 300cc form. 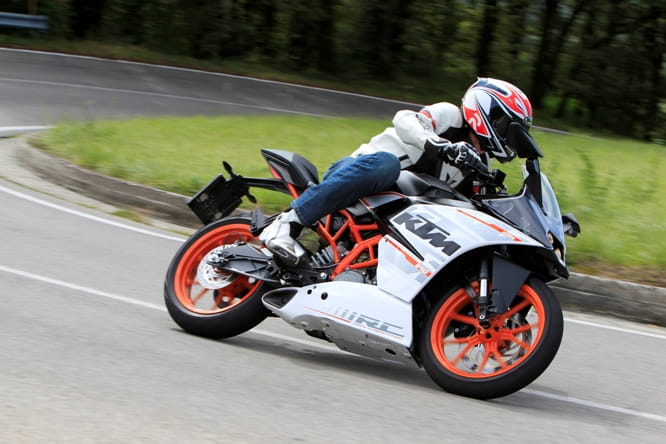 Racing activity and interest in this new ‘class’ is growing, too. The Santander RC390 Cup got underway at Donington in support of the BSB series earlier this month and is raising the profile of not only KTM’s offering but of the whole class. While even World Superbikes organisers, Dorna have gone on record about looking to develop a new ‘entry level’ racing class “based on the burgeoning Supersport 300 class machinery”. 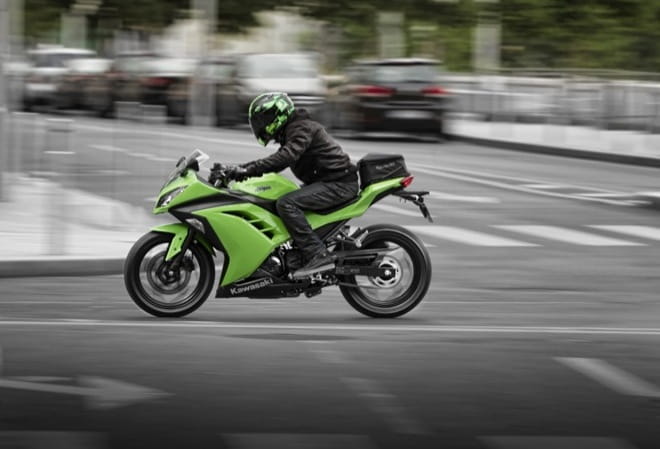 So the obvious question is why?

Unfortunately, the answer isn’t quite so simple. In fact, although we’re talking about a ‘300 class’ that in itself is inaccurate. It’s tempting to think that we’re seeing a modern day equivalent of the huge popularity of 250s in the early ‘80s or of 400s in the ‘90s, but today’s situation is actually very different.

In the 1980s 250s became an important category in the UK specifically because of their capacity and the fact that, up to 1983, British law restricted learner riders to sub-250cc machines. In the 1990s, 400 supersport bikes became popular for exactly the same reason, the difference being it was then Japanese law which created the sub-400cc learner demarcation. 400s thus became hugely popular in Japan, enough for manufacturers to offer a huge and tempting range of such machines which then, both unofficially and officially, found their way to the UK. 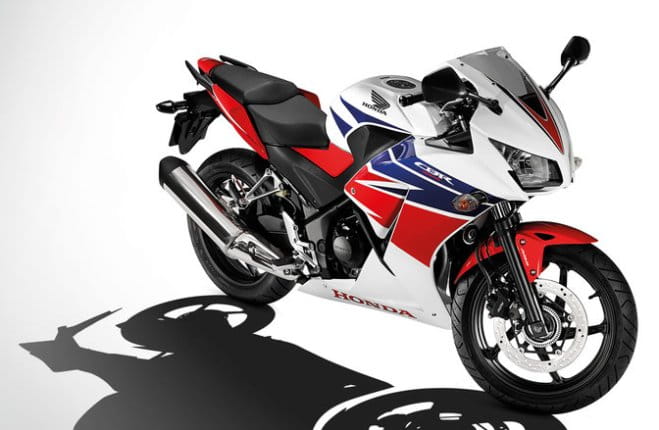 This time round, however, although it’s tempting to refer to this new class as ‘300s’ it’s come about more by coincidence than design and actually covers a wide variety of machines ranging from the single cylinder 375cc KTM and 268cc Honda to the twin cylinder 296cc Kawasaki and new 321cc Yamaha. To be exact: compared to the ‘80s and ‘90s there is no legal requirement for these bikes to be a specific displacement.

What DOES link them all, though, if not 300cc exactly, is the looser term ‘junior supersports’: machines which are stepping stones between A1 licence learner 125s and full supersports 600s; bikes which are affordable and easy to ride for beginners but still entertaining for more experienced types.

OK, so that’s what they are – but why have they become so significant?

There are three key reasons. First, since January 2013 new motorcycle licence laws have been in effect Europe-wide which both restricted all riders under 24 to motorcycles of under 47bhp and also restricted anyone who passed their A2 licence to these machines for two years. Immediately, a new category was born –­ but note: it’s not, specifically, a 300cc one, it’s a sub-47bhp one. The new Yamaha R3, for example, is 41bhp, the Ninja 300 39bhp and the CBR300R 30bhp.

Second, ever since the global economic meltdown of 2008, which hit not just motorcycling but specifically Japanese motorcycling particularly hard, more cost-effective motorcycles have been high on the agenda for both consumers and manufacturers alike. Buyers have been demanding more budget-friendly machines; manufacturers have been looking to develop bikes more cheaply. It’s no coincidence that the Ninja 300 is a development of the Ninja 250 which debuted back in 2008; nor that the new R3 is an evolution of the 250cc R25 created primarily for the more buoyant south-east Asian market, nor that the CBR300R is a development of the CBR250R first launched in 2011. 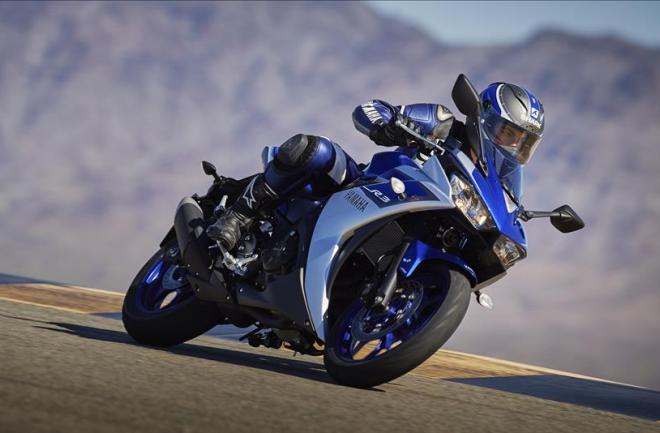 And thirdly, and probably most importantly, after tentative beginnings during the recession, this new ‘class’ is proving to be particularly popular – all the more so as the global economy improves. In the US, for example, which is seen by Yamaha as a crucial market for the R3, sales of sub-500cc machines have doubled in last five years, with the Ninja, the Yamaha’s biggest rival, performing particularly well.

So, what can we conclude from all this? Yes, a new class is most definitely with us but it’s not, strictly speaking, a ‘300’ one. Think of it more as ‘junior supersports’. That doesn’t mean, either, that a new race classification is on its way. Dorna may be looking into the possibilities but its very nature of NOT being a capacity or configuration class in the conventional sense would logically preclude this. And is this new class here to stay? Most definitely. As the R3 proves, more and better examples are constantly being introduced and, from what we can hear from BMW and Triumph, more are already on the way. In the meantime, here’s a comparison of the main runners: