Tax avoiders have become public enemy number one in recent years. Politicians, bankers, CEOs and their multinational corporations have all been dragged through the press (some of them through the courts) for dodgy dealings, off shore accounts and crooked books. Hardly seems worth it.

No one likes paying tax mind you, but there's really no need to start getting your post forwarded to Jersey or employing a hot-shot accountant to do your bookkeeping, there's a completely legal way to avoid paying tax: buy a classic bike.

Any bike built before 1 January 1974 is considered a 'historic vehicle', and is exempt from 'vehicle excise duty'. Big deal, you might say, but that doesn't just mean leaky, smoky old clankers any more, by the early 70s the modern superbike had been born, the Japanese were at full tilt and the race for speed had begun.

With a bit of thumbing through the classifieds you can get some serious superbike muscle, and never have to worry about road tax again. Here are a few tax-free classics to consider: 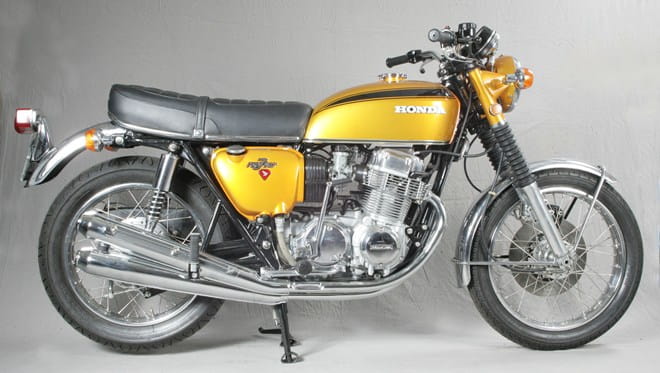 The CB750 sent a shockwave through the motorcycling world when the cover came off it at the 1968 Tokyo motor show. Up to then, the Japanese motorcycle industry mainstay was the small, reliable, ride-to-work machine, the arrival of the CB750 not only changed the way we looked at Japanese bikes, it changed the way bikes were built forever.

Rumours were rife that the Big Red had a four-cylinder machine up its sleeve (Kawasaki did too, which I'll come onto shortly) but no one really thought they could, or would, pull it off.

They did and the press, industry and punters were stunned by its spec sheet: a 736.5cc SOHC in-line four cylinder motor, four carburettors, a five speed gearbox and an electric starter, a hydraulic front disc brake, chromed four-into-four exhausts...

It would top 125mph, wouldn't rattle your fillings out on the motorway, it was reliable and started at the push of a button (handling and braking weren't wonderful, but you can't have everything) and looked the business. It knocked one of the final nails in the British bike industries' coffin, coined the phrase 'superbike' and set the benchmark for big production bikes.

First generation bikes, as you'd expect, fetch big money, but production of the CB750 in SOHC form continued until 1978. Pick up a K2/3 and you still get what's considered an 'original' CB, but much cheaper. By then Honda had ironed out a few of the handling issues too, with improved forks and adjustable shocks. 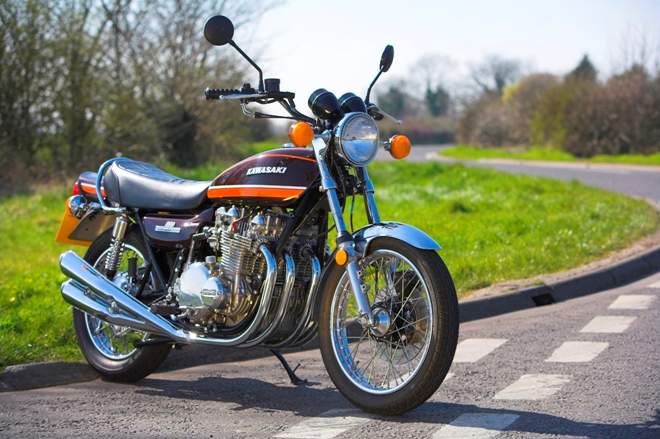 Kawasaki were properly caught out by Honda's unveiling of the CB750 in 1968. They too were developing a multi-cylinder machine, but the surprise arrival of the CB meant the launch had to be scrapped and the designers sent back to the drawing board.

Their orders were to make theirs bigger and better than the Honda and what they came up with definitely fulfilled the brief.

With 903cc and 82bhp on tap, the Z1 became the new king of the road. Like the Honda, the Z1 had an impressive spec: five speed gearbox, electric starter, a front hydraulic disc brake and four shiny chromed exhausts, but is wasn't quite as sophisticated as the CB and the basic frame and single front disc just wasn't enough to deal with the 130mph performance and lardy 230kg weight. The Z1's flexing frame gave Kawasaki a reputation of engines being too much for their chassis' to handle, that they didn't really shake off until the late 80s.

The engine was, and still is, a corker though. It helped cement Kawasaki's reputation on the racing circuit with the likes of Eddie Lawson and Wayne Rainey in KZ1000R guise; formed the basis for the equally iconic GPz1100 in the 80s; and derivatives of it can still be found in Kawasaki's Z models today.

The Z1 in its original form had a four-year production run, so you should be able to find one without too much trouble. You'll need deep pockets, as they're not cheap, and a good dose of Dutch courage to ride it... Suzuki's 750 two-stroke triple was their answer to the superbikes of the day. Oozing with technology, the 'Kettle' as it became affectionately known, was the first Japanese production bike with a liquid-cooled engine and - in 1973 - would be the first to feature a twin-disc front brake.

It's space age spec didn't translate to rocket ship performance: big, heavy and with only 67bhp it couldn't compete with the CB and Z1. It didn’t handle particularly well, the brakes were considered poor even by 70s standards and ridden hard, fuel consumption was abysmal – although saying that, the race-tuned version topped nearly 180 miles an hour at Daytona

As a sports tourer though (the GT did stand for Grand Tourismo, after all) it was smooth, quiet, comfortable, and tuned for torque – it had a fancy Exhaust Coupler Tube System (ECTS) designed to boost low-end power delivery – it was considerably less frantic than the big air-cooled strokers of the day, and earned a reputation as a much more civilised way to travel.

It also looked great, with acres of alloy and chrome to polish, lurid 70s paint jobs and those fabulous three-into-four pipes.

Identify the later model by its twin front discs – earlier ones had a TLS, 200mm drum – chromed radiator side covers and chain guard, and make sure you're local garage stocks two-stroke oil. 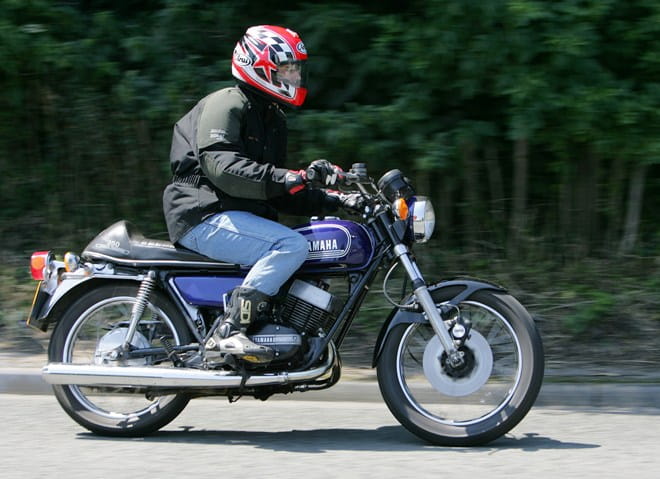 By the early 1970s Yamaha had two-stroke design off to a fine art, but even by their standards the RD350 was a huge leap forward.

Based heavily on the R5 – which had already set the benchmark for road two-strokes – and featuring technology tested on the mighty TZ race machines, the RD re-wrote the two-stroke rule book.

The biggest change was the move from piston porting to reed valves. To engineers, it meant more precise port timing, less wasted mixture and more flexible power delivery; to us it equated to a bike that would keep up with something twice its capacity.

The RD screamed onto the streets in 1973 and was an instant hit. Press, punters and amateur racers loved it. Out of the crate it pumped out 39bhp (it could be tuned to do significantly more) did a quarter mile in a shade over 14 seconds and would top out at just over 100mph. Couple that with a 145kg kerb weight , the precise and nimble chassis, and a front disc brake that actually worked, and in the right hands the RD really could live up to its “giant killing” reputation.

On Monday morning, it would happily take you to work too.

Why wouldn't you? Prices are still fairly sensible, so get in there before they start going skyward. The RD had Yamaha’s Autolube lubrication system, so you don't have to worry about messy pre-mixing. By the early 1970s the British bike industry was in tatters, and Norton were no exception. Poor quality control, miss-management and the resulting industrial action had hampered development, and the models showed it. Attempting to compete with the Japanese multi-cylinder machines in the performance stakes Norton had squeezed too much out of the then long-running 750cc  Commando and the resulting main bearing failures and broken pistons delivered a almost fatal blow to the marque's reputation.

Undeterred, and unwilling to accept that the parallel twin had had its day, Norton went back to the drawing board. They upped the Commando's capacity to 828cc, toughened up the bottom end, lowered the compression ratio to reduce stress and sorted out the vibration with a new 'Isolastic' mounting system.

Perhaps most importantly, they stopped trying to compete with the Japanese fours and instead concentrated on making the Commando do what it did best, better.

The result was perhaps the best British twin ever: fast, torquey, reliable, comfortable-ish and smooth-ish. It was lighter, slimmer and more nimble than the big Jap fours; just as fast (125mph) and had a hell of a lot more soul.

The Mk1 Commando 850's run was a short one, so there aren't many out there. The ones that are will, by now, have found their way in to the sheds of enthusiastic and dedicated owners, so most of the nightmares associated with clapped-out old Brit bikes should have been ironed out.

Second generation big Italian twin, regarded by many as the best of the bunch. Decent turn of speed (117mph when new), sure-footed if heavy handling, and nowhere near as fragile as a Ducati (they were built like tanks, and used Bosch electrics).

Essentially a scaled-down version of the 750, the CB500 Four was billed as (and many would say was/is) more of an all-rounder that it's big brother. Had the impressive spec of the 750 – four cylinder SOHC motor, disc brake, electric start etc. – but is lighter, easier to ride and is considerably cheaper.

Smaller sibling to the iconic R90, and some say a better all-round machine. Shares much of its more celebrated big brother's 'technology' at a fraction of the price. Clunky, heavy, and quirky, but will carry you in complete comfort for mile after reliable mile.

Read our Guide to Classic Motorcycles to learn more about the benefits of classic motorcycle ownership.

Do you have any to add to the above list? Any that take your fancy?  or