With Triumph’s new, Moto2-inspired, Daytona 765, the middleweight sportsbike class is suddenly looking healthier and more competitive than it has been in years.

It wasn’t that long ago, after all, that the complete demise of the supersports category had been predicted following collapsing sales in the late Noughties and the withdrawal of once best-selling 600s such as Honda’s CBR, Suzuki’s GSX-R.

More recently, however, they’ve been making a comeback. Yamaha unveiled a completely updated R6 in 2017, sporty, road all-rounders such as Honda’s CBR650F and A2-friendly CBR500R have proved big hits and a new ‘Supersports 400’ class, as seen supporting World Superbikes, has seen the likes of exciting newcomers from the likes of KTM.

All of them offer true sportsbike thrills – sharp handling, exciting performance and brakes and suspension often worthy of the race track – but in a package and for a price that’s far less intimidating and more accessible than their superbike big brothers.

And 2019 offered a bigger choice than ever thanks to more newcomers and updates from Honda, Kawasaki and Yamaha, now’s a great time to have a closer look – so here’s our pick of the 10 best, in ascending price order… 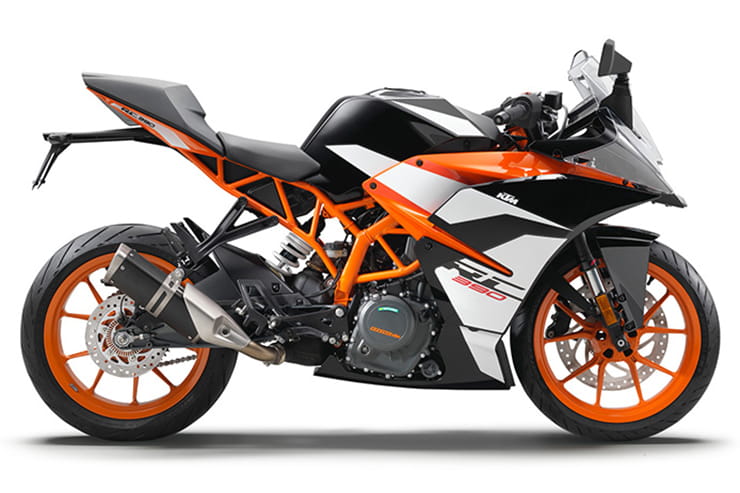 Yes, the RC is ‘only’ a 373cc single. Yes, it’s as small and light – almost – as a learner 125 and yes, too, it’s a slightly oddball and extreme KTM – but no middleweight or smaller sports bike delivers as many super-sharp, extremely nimble handling thrills as the RC390. Inspired by KTM’s Moto3 class racers, the RC is based on the drivetrain and chassis of the Austrian firm’s more familiar supermoto 390 Duke. As such it has an incredibly punchy delivery and, thanks to its tubular steel trellis frame and minimal equipment is also class-leadingly light. Add to that quality suspension, brakes and a sports attitude with full race fairing and you’ve got, arguably, the sportiest, most extreme bike in its class. On the downside, the RC is also 125 tiny, comparatively cramped, lacks the versatility and long-distance comfort of many of its rivals here and, although seemingly affordable, is fairly Spartan, too. But if you want pure sports bike thrills in a junior package and on a limited budget, there’s nothing quite like it. 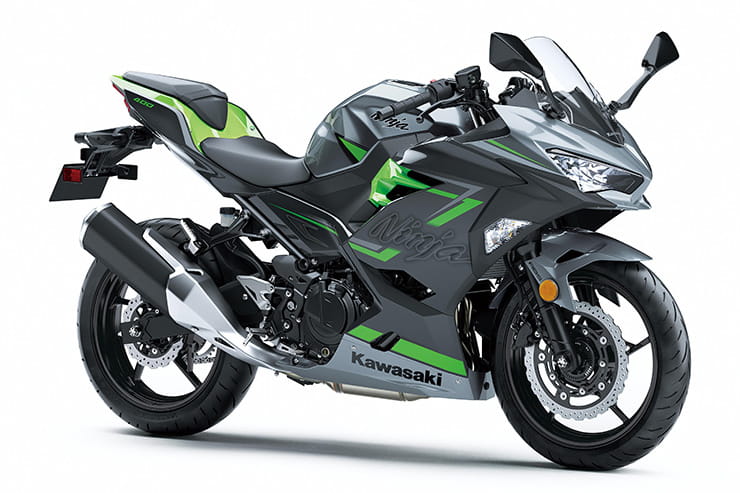 If you’re interested in a light-to-middleweight, entry-level sports bike it’s difficult to argue against the Ninja 400. Launched last year (2018) as a successor to the much-loved Ninja 300 (which, from 2012, was pretty much the definitive, lightweight, A2 sportster and in turn had succeeded the old Ninja 250 R), the little Ninja has pretty much everything going for it – looks, value, handling, performance and user-friendliness. Unless, that is, you can stretch to a 500 or larger. The now 399cc parallel twin now produces a willing 44.3bhp and is a gem: free-revving yet decently flexible and with bags of character, too. The uprated chassis, although still a little basic, is well set-up, delivering great, nimble handling yet a decent ride, as well. Though sporty, it’s not so extreme as to be intimidating and uncomfortable (as are, say, full-on supersports such as Kawasaki’s own ZX-6R and Yamaha’s R6) and the new mini-ZX-10R styling along with good build quality and impressive equipment engender a real pride in ownership yet still at an affordable price. If you’re a relative novice and want 400-class sports thrills, this is the one to have. 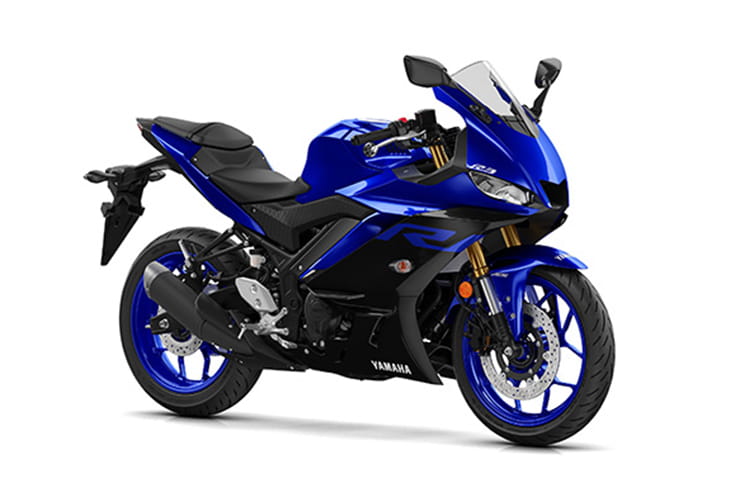 Contrasting with Honda’s 500 family but akin to Kawasaki’s 300/400s, Yamaha’s A2-targetted offerings, although still twins, are smaller, slightly more sporty and extreme – and cheaper, too. Its sports R3, along with its roadster MT-03, was first introduced in 2015 powered by an all-new, 321cc parallel twin producing 41.4bhp and held in a chassis that’s mid-way between a YZF-R125 and R6 in terms of proportions and spec. As such it’s novice-friendly small, light and easy to ride but also, thanks to its aggressive styling and attitude, still a fun sportsbike, too. Updated for 2019 with new inverted forks and rear shock, new full-LCD dash and improved styling, the latest R3 is more engaging and sportier than ever but without losing its ease and practicality – although larger, taller, less committed riders may still prefer the added roominess and flexibility of its Honda rival. 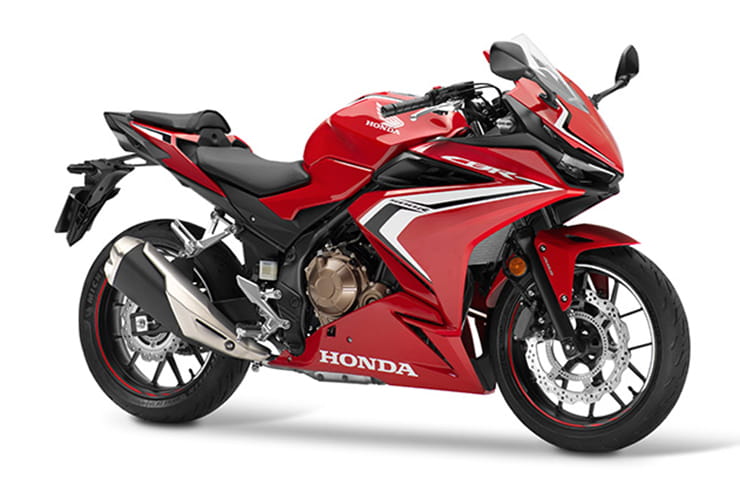 First introduced in 2014 as the sports variant of Honda’s all-new, A2-compliant, CB500 twin family (the other offerings being the CB500F roadster and CB500X adventure-styled machine, the fully-faired CBR has proved a big hit as a novice-friendly, middleweight sportster. With the same, purpose-built, 47bhp parallel twin engine and frame as its siblings yet with a sportier attitude and racier looks it’s a great introduction to sports bikes yet also completely unintimidating, easy to ride and practical. And with a twin-cylinder, 500cc engine, where many rivals are either 400cc twins or even singles, the Honda is also meatier, more substantial and with a more flexible delivery, too. Built in Thailand to keep its price affordable, the CBR still has plenty of Honda quality touches. Its styling and suspension was updated in 2016 while for 2019 its been improved again with Fireblade-esque styling, engine tweaks to give more midrange and a better throttle response and a new rear shock. As a first-time, A2 sportster they don’t get much better. 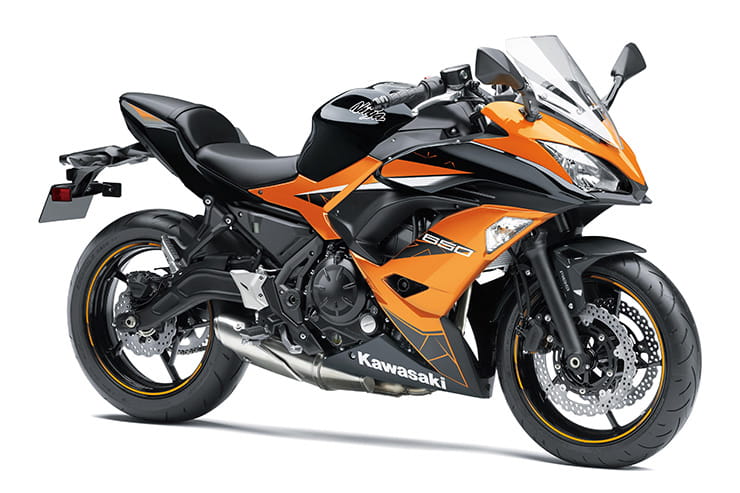 Japanese giant Kawasaki should be commended for offering more midrange sportsbike offerings than most of its rivals (along with the Ninja 650 it also has the Ninja 400 and ZX-6R) and the twin cylinder Ninja 650 is up there with the best in terms of accessible sporting fun, versatility and value. Introduced in 2017 as the latest (renamed) incarnation of the ER-6f (which was itself first introduced in 2005 before itself being updated in 2009 then 2012) it’s powered by the brilliant 67bhp 649cc parallel twin that continues to dominate the Lightweight TT held in a road and novice-orientated sports chassis that delivers more than enough sports thrills for most. That engine is unintimidatingly flexible yet revvy and fun; the chassis, though not quite supersports class, is nimble and fun. Ergonomics are all-day comfortable and practical and updated ZX-10R-alike styling, great build and quality touches such as span-adjustable levers, faired-in indicators and a pleasing dash give a sense of quality and style that belies its budget price (although, if you want this KRT green/black or orange livery it’s £200 extra). 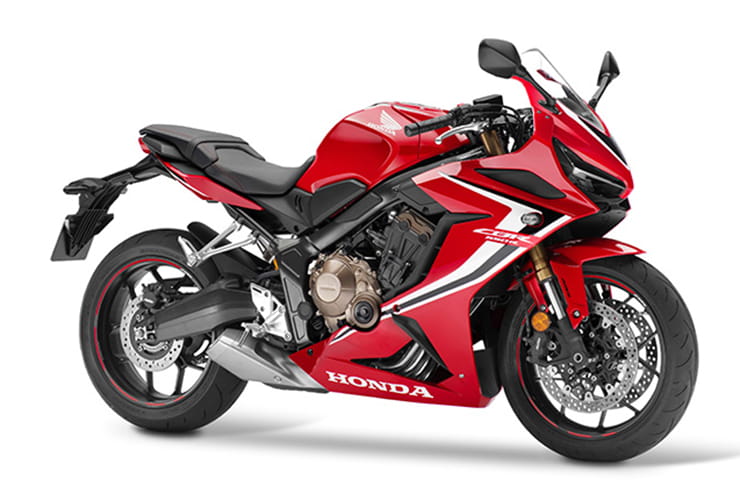 The spiritual successor to the hugely popular four-cylinder CBR600F of the 1990s was first introduced as the CBR600F in 2011 as a slightly softer, all-rounder foil to Honda’s then full-on supersports CBR600RR. That bike was superceded by the 649cc, 86bhp CBR650F in 2014, and joined by an unfaired, roadster version, the CB650F, with both being updated again in 2017 with sharper styling, an uprated 90bhp four-cylinder engine and improved suspension. While for 2019 it’s been revised again with styling that’s now even closer to that of the Fireblade, a slightly revised chassis, a sportier riding position and further performance boost to 94bhp (not to mention the name change from CBR650F to CBR650R). The result is very much a ’90s CBR6 brought forward to 2019: a pleasant, unintimidating, road-orientated sportsbike that’s also versatile, practical and affordable – or, in other words, a four-cylinder bigger brother to the similar-looking CBR500R. It’s no full-on, screaming, uncompromising supersports, like Yamaha’s R6 or Kawasaki’s ZX-6R, but as a road bike that can still entertain, it has an awful lot going for it. 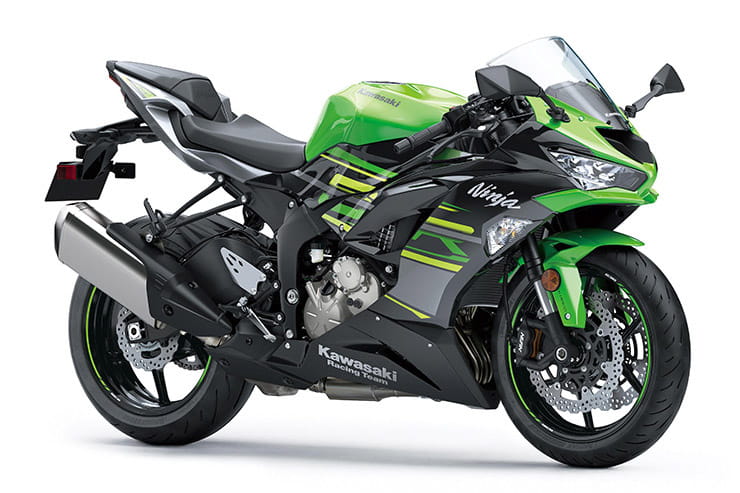 For a while Kawasaki was alone among the major manufacturers in persevering with the then unfashionable supersports 600 category, continuing to update, albeit mildly, its ZX-6R while rivals such as Suzuki’s GSX-R and Yamaha’s R6 dwindled on unchanged. But with a resurgence of interest in the class, first sparked by Yamaha’s new R6 in 2017, a further updated for 2019  ‘mini Ninja’ remains a tempting alternative. Being, since 2013, 636ccs (although Kawasaki has flirted with the larger capacity repeatedly since 2000), gives it a slightly meatier midrange than some 600cc rivals, but in ever other respect it’s a proper, screaming mini superbike – with all the pros and cons that go with it. Peak power is 128bhp at a screaming 14,000rpm, steering, brakes and suspension are as sharp as a tack and the riding position is cramped and, generally, impractical. But on track or in those brief fleeting moments on the perfect deserted road there’s little more thrilling or engaging – except, arguably, Yamaha’s R6. 2019’s updates include revised styling and updated electronics and details, but the ‘mini Ninja’ experience is as intense as ever. 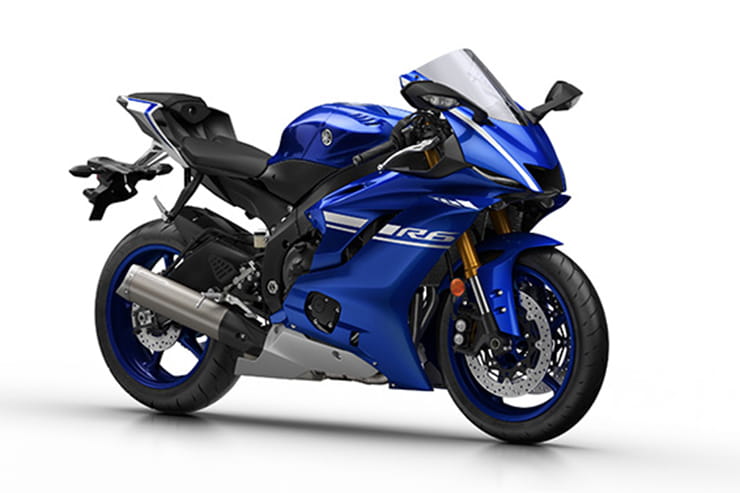 Still the definitive supersports bike. The first R6, way back in 1999, set the template for the class as a mini version of 1998’s game-changing 1000cc R1. Subsequent versions remained there or there abouts until, in 2007, an all-new screamer introduced ride-by-wire and revolutionized motorcycling just as supersport sales fell of a cliff. As such, over the best part of the following decade and as reflected in bikesport success including numerous world supersport and TT wins, the R6 remained the 600cc racer replica to have. This latest version came out in 2017 with modernised MotoGP M1 looks, an uprated, super-sharp chassis and, disappointingly, slightly neutered performance (peak power was down from 130 to 116bhp) to get through the latest emissions regulations plus a hefty price tag. In reality, though, it’s still the supersports 600 benchmark: every inch a ‘junior’ R1 with top notch brakes and suspension, steering to die for and plenty of electronic gizmos. If you’re idea of sportsbike heave is 600cc, the R6, still, is the one. 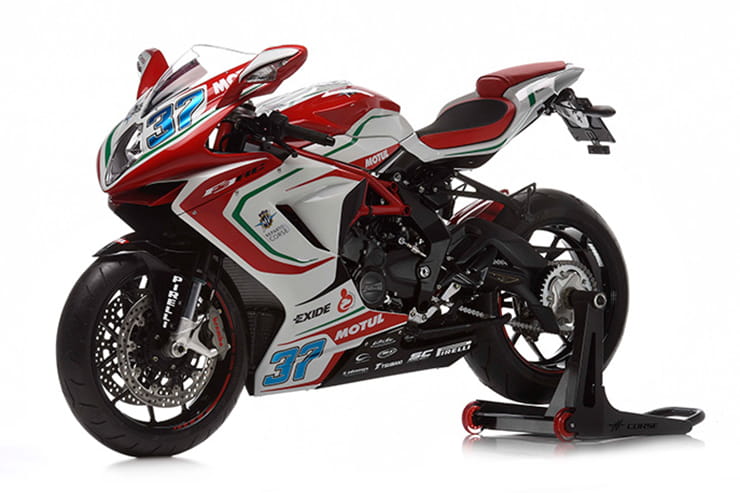 Launched in 2018 as an uprated, limited edition version of its existing and already super-sharp F3 675 triple, the RC (or ‘Reparto Corse’) naturally boasts all of the extreme performance and handling of the base bike (if you think ‘concentrated, Italian Triumph Daytona 675’ you won’t be far wrong). That means a screaming, 133bhp in-line triple complete with lavish electronic rider aids suite; a compact, uncompromising, super-sharp tubular steel chassis complete with single-sided swing arm and Brembo brakes and simply mouth-watering Italian styling complete with side-mounted exhausts. In this RC trim, meanwhile, it also gets a full-race titanium ‘SC’ exhaust, carbon fibre seat and other bodywork, race gearing, special billet levers, stunning racer-replica paint job and more – enough to make it the most racer-replica of all middleweight sportsters, in fact. No, it’s not cheap, but the RC certainly is some kin d of ultimate 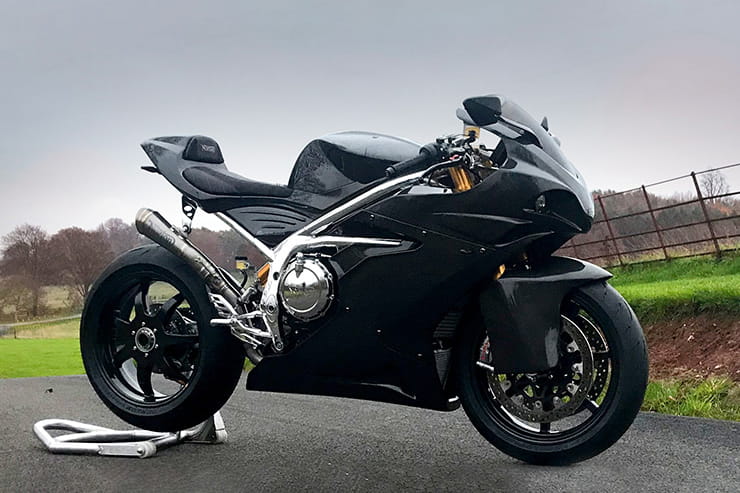 Essentially Norton’s V4 superbike but with a slightly lower specification and, crucially, powered instead by Norton’s 650 parallel twin (which also powers the Atlas and is effectively half the 1200cc V4) Although its success at the TT in the Bennetts Lightweight class was limited – it’s best placed rider, Peter Hickman, was eighth), for a first showing against the hordes of proven and perfected Patons and Kawasakis wasn’t bad either. The bike includes top-notch Ohlins and Brembo parts, carbon fibre bodywork and a claimed 105bhp pushing just 158kg dry.