We pick out the top ten adventure bikes from the 1980's and 90's which laid the path for today's all-singing, technology-laden weapons. In no particular order: 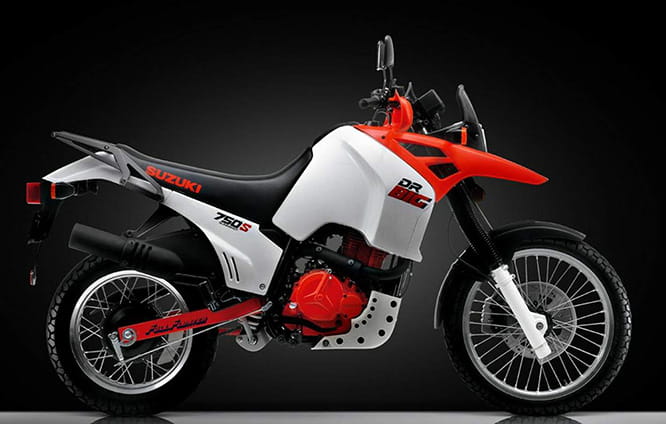 Oddball, massive 727cc single with 105mm bore and pushing out 50bhp was one of the very first ‘Paris-Dakar replica’ adventure bikes with a works version being ridden to victory in the event by legendary Belgian racer (and 1984 & 1985 winner with BMW) Gaston Rahier. In 1990 the ‘Dr Big’, as it became known, was enlarged further to become the DR 800 and continued in this form, complete with distinctive ‘beak’, as the world’s largest single-cylinder production bike until being discontinued in 1999. 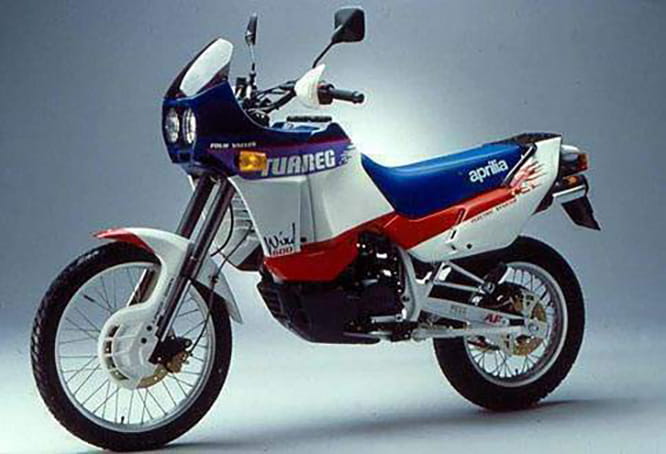 Another big single (although not as big as the Suzuki, above), the Tuareg, (the name of a desert nomad people given to Aprilia’s trailies since 1984, beginning with a 125cc two-stroke), was a garishly liveried (like all Aprilias of the era), P-D-inspired, long-haul machine with a typical trailie 21-inch wire front wheel and long suspension, which compromised its road manners somewhat. Few made it to the UK and fewer still survive so you’re extremely unlikely to see one today. 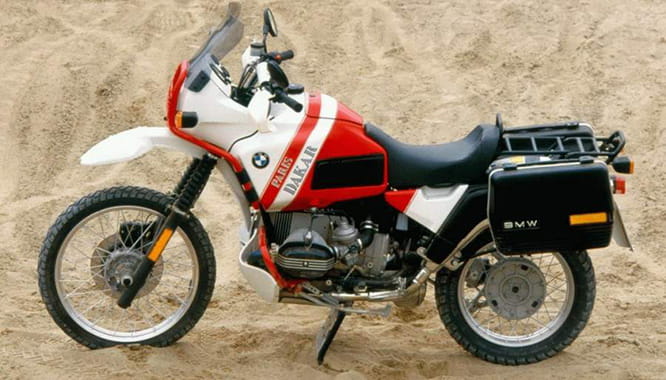 Although the original R80G/S initiated the whole adventure bike genre and the twin cylinder machine was massively successful in the Paris-Dakar rally from the outset, winning in ’81, ’83, ’84 and ’85,  it wasn’t until 1990 that an official ‘Paris-Dakar replica was offered by the German factory. Until then, only conversion kits had been offered, first in 1983 for the R80GS, then in 1988 for the then R100GS. In 1990, however, the variant, which comprised a larger, 35-litre tank, single seat with luggage rack, fairing crash bars, bash plate and extended fenders, was offered ready built. It remains one of the most desirable ‘classic’ GSs of all. 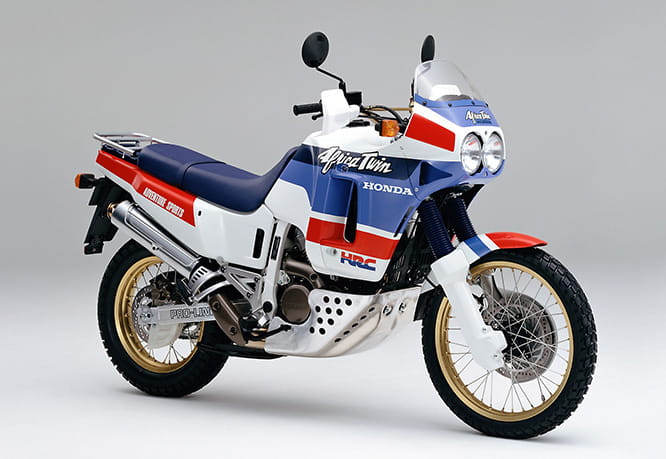 Honda’s first ‘blank sheet’ Paris-Dakar entrant (Cyril Neveu had won in 1982 aboard a converted XR500) was the HRC-developed NXR750 V-twin, which won first time out in 1986 (and would go on to win in 1987, ’88 and ’89 as well). Partly to celebrate this success, but also to capitalize commercially on the huge popularity of the event, particularly on the Continent, Honda launched a production, road-going replica in 1988. Although not officially available in the UK, the first ‘Africa Twin’ was a huge success and is highly prized today. 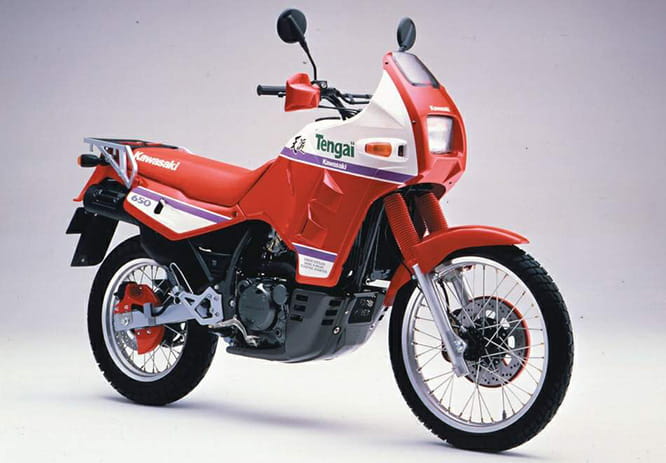 Possibly one of the least convincing of the early Paris-Dakar replica adventure bikes (Kawasaki never officially entered the famous desert race, so it’s not a replica of anything while essentially the bike was just a modified KLR650 trail bike, the Tengai is nevertheless a reasonable machine – particularly if you think of it as a ‘middleweight adventure bike’. Like the KLR it’s based around a 651cc, 48bhp single but this time with a 24-litre plastic tank and integral touring fairing. Although unstartling, it was a great all-rounder. 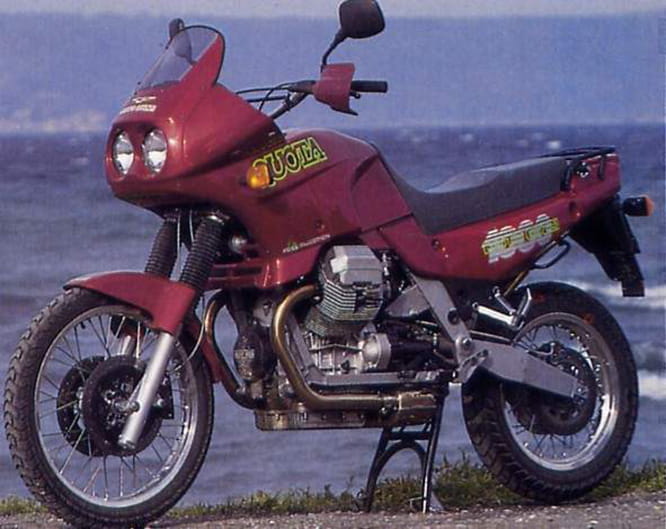 Possibly the most ill-judged and simply enormous ‘Paris-Dakar replica’/adventure bikes of all. By the late ‘80s the allure of the P-D adventure machine had attracted virtually every manufacturer, however inappropriate their wares. The most standout of these, surely, was historic Italian cruiser firm Moto Guzzi who presumably saw no problem in dressing its big, 1000cc, transverse V-twin shaftie in long suspension, off-road wheels and a big fairing. The result, the Quota, was massive: tall, ungainly, heavy, crude. Instead, the biggest surprise was that it stayed in production (until the late ‘90s) for so long… 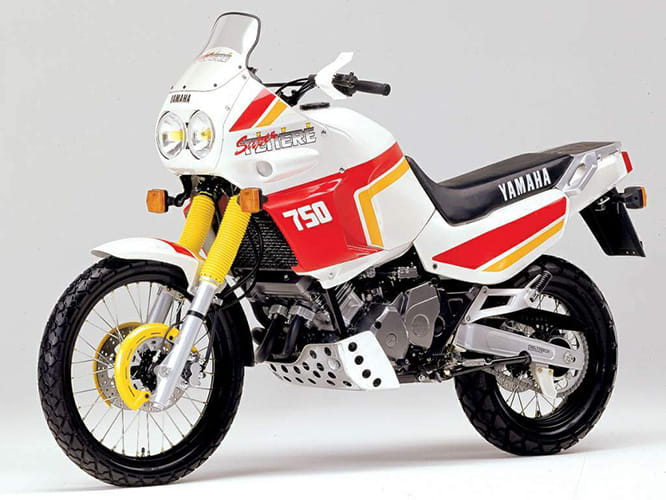 Yamaha’s response to Honda’s Africa Twin proved to be one of the best bikes of the whole genre. The clean sheet design centred around an all-new, five-valve, parallel twin that would later go on to be used in bikes like the TDM850 and TRX850. As such, the 70bhp Super Ten was punchy yet flexible, had decent handling (for a trail-style machine with a 21-inch front wheel), decently equipped and good looking. It was less durable than its Honda rival, or as cossetted by its owners, however, so fewer survive today. 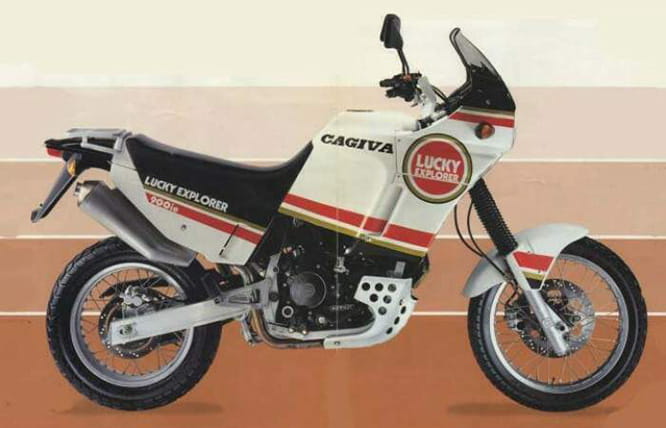 Arguably the best of all the Italian adventure bikes, the Elefant managed to blend a heritage of its own (Elefant was the name Cagiva had given its trail bikes since the original 125cc stroker in 1983); Ducati’s impressive and eager air-cooled V-twin (Cagiva had owned Ducati since 1985) and genuine Paris-Dakar credibility, having won the race in Lucky Strike sponsor livery as ridden by Edi Orioli in 1990. A number or variants were made, including a 750, but the replica 900 ie injected version is the one to go for. 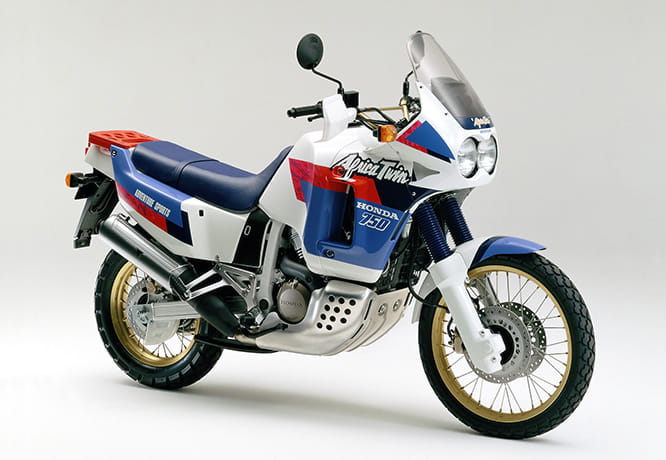 The original, 650cc, ‘RD03’ Africa Twin was succeeded by the virtually all-new 750cc ‘RD04’ in 1990. Enlarged engine put out five extra bhp, a second disc at the front improved braking and weather protection was increased, too. But as a more mass-produced machine compared to the ‘HRC’ 650, the 750s wasn’t quite as classy or exclusive. Updated again in 1993 (to become the RD07) the AT gained smoother bodywork and improved ergonomics and retains a devoted following to this day. 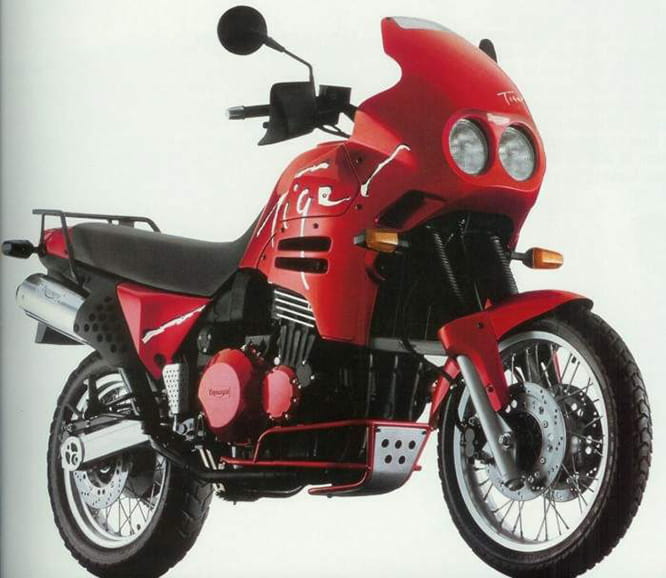 Like the Tengai, not a true ‘Paris-Dakar replica’ as Hinckley Triumph never entered the desert classic. Instead the 900 Tiger, like all early Hinckley bikes, is a variant of its modular three and four-cylinder machines made possible by the addition of a newly-legalised plastic fuel tank complete with integral fairing, longer travel suspension plus MX bars and off-road wire wheels and semi-knobblies with a 21-incher at the front. Mongrel as that sounds, it was actually a decent bike thanks to its grunty, detuned, 85bhp triple and Triumph’s characteristic decent handling. Rare today though…