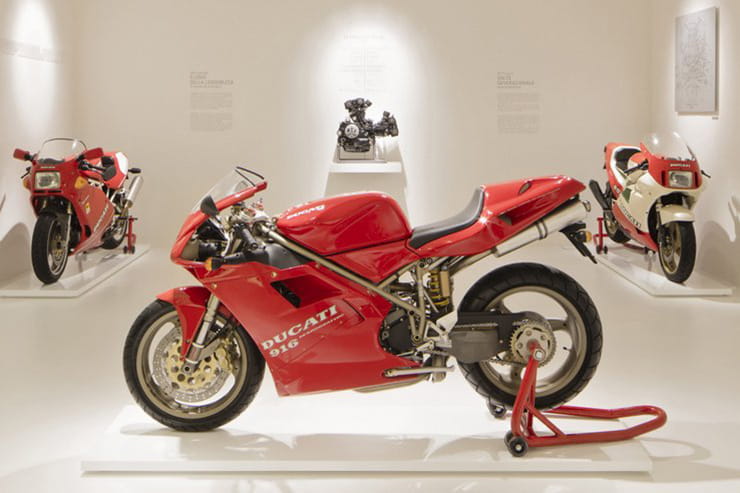 The year 1994 conjures a few vivid images that remain crystal clear even a quarter of a century later. Who can forget the helicopter shots of OJ Simpson’s bizarre low-speed police chase, for instance?

In the UK the grisly crimes of Fred and Rose West were splashed across the front pages and the World Cup dominated the back. It was when we were first told “It could be you” as the National Lottery was launched, and The Fast Show emerged to define a generation of comedy.

It was also the first time that you could walk into a bike showroom and see Ducati’s 916 in all its glory. My first look at one, tucked among the more mundane offerings at Motorcycle City in Farnborough, stuck in my then-teenaged in the mind just as clearly as those Fast Show catchphrases and the helicopter shots of OJ’s white Ford Bronco.

Hundreds of bikes have been launched since then, but none have been as influential as the 916. 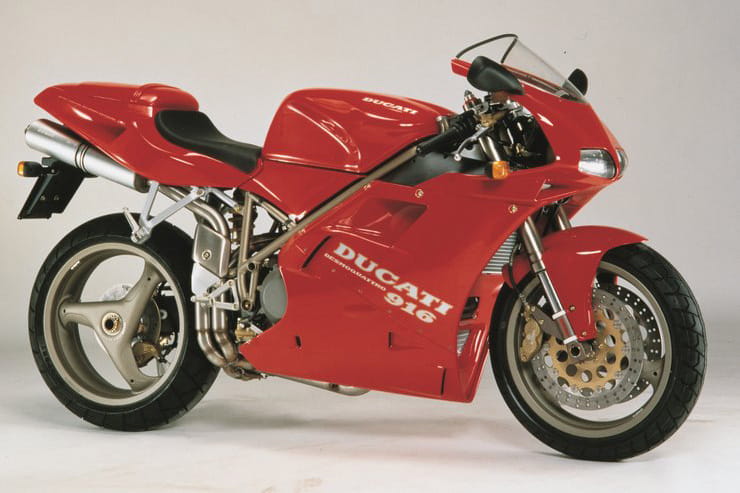 The 916 first reached buyers in 1994 but that was the culmination of a process that had seen the bike unveiled to a stunned press the previous autumn after several years of development under the guiding hand of Massimo Tamburini, who was responsible not only for the aesthetic decisions but also the technical choices that made the 916 stand out from the competition.

We’ll start with the styling, since it’s without doubt the element of the 916 that initially grabbed the attention. The advent of projector-beam headlights – which first appeared in cars in the latter half of the 1980s – meant that bike designers gained the freedom to move away from the traditional round or rectangular lights that previously defined front-end styling and experiment with new shapes. The idea of two slit-shaped lights might be a common one on bikes now, but the 916 was a pioneer in the field.

Those lights were needed because Tamburini’s styling borrowed heavily from the work done by Pierre Terblanche on the Ducati Supermono racer, which first introduced the arrow-shaped side profile to the nose that the 916 would later take on. Tamburini also grabbed inspiration from Honda’s NR, the oval-pistoned 750cc V4 that first appeared as a concept bike at the 1989 Tokyo Motor Show. It pioneered several cues that would later be adopted by the 916, with Tamburini himself admitting it influenced his design. As well as slit-shaped twin lights, the NR also featured a single-sided swingarm and shotgun-style under-seat exhausts, both design cues that would become key features of the 916.

The underseat pipes in particular were a relatively late change to the 916’s design. Initially it was intended to use side-mounted pipes; in that respect perhaps the 916’s baby sister, the Cagiva Mito that also appeared in 1994 and shares near-identical styling, is arguably closer to the original design.

Although it was first unveiled at the 1993 Milan show the 916 wouldn’t reach production until the following year – and it’s worth remembering that Ducati of the early 1990s was a very different company to the giant it has become today.

At the time it was part of the Cagiva group, owned by Claudio Castiglioni, and spent much of its time teetering on the verge of financial collapse. So while demand for the 916 was strong in its first year, production levels were relatively low. In fact, the rapturous reception that the 916 received arguably saved Ducati, leading to the 1996 takeover by investment firm Texas Pacific Group which helped consolidate Ducati’s fortunes for the next decade.

Initially, the 916 appeared in monoposto (single seat) Strada form, making 114hp. That’s precisely 100hp less than its modern equivalent, the Panigale V4, achieves – impressive progress in 25 years. A higher-spec 916 SP was also introduced with a claimed 126hp thanks to a significantly different, twin-injector version of the Desmoquattro engine with race-oriented internals. 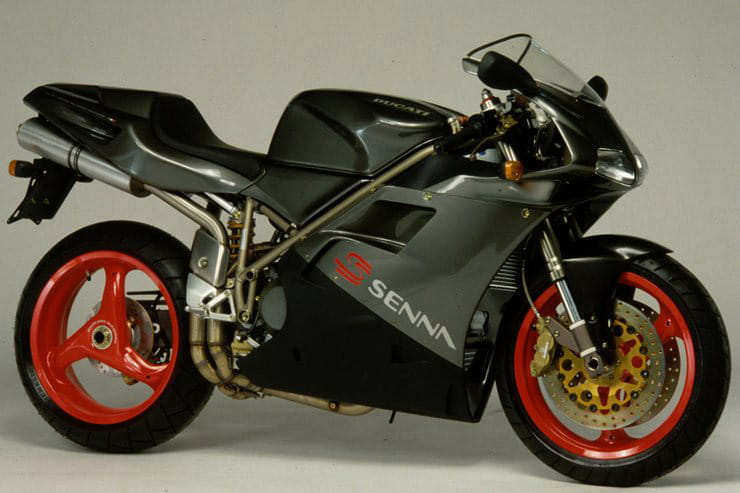 The first-year 916 Strada was replaced in 1995 by the twin-seat Biposto model and Ducati also launched the first 916 Senna – a project that had been instigated before Ayrton Senna’s death in 1994. It combined the standard Strada/Biposto spec engine with a handful of chassis parts from the SP, along with a black paint scheme, red wheels and a smattering of carbon fibre. Just 300 were made, but later ‘Senna II’ and ‘Senna III’ models would boost that total.

The focus was on racing, and while the basic 916 Biposto street bike wasn’t updated Ducati spent the early years of 916 production constantly fiddling with high-spec, limited-edition versions to homologate racing parts. In 1996 the firm introduced the 916 SPS, featuring a 996cc engine, and also built even smaller numbers of a bike called the 955SP with a 955cc capacity. Ducati had been racing with a 955cc engine in WSBK since 1994, but needed to build 50 road-going examples with the same 96mm bore to be allowed to use the 955cc motor in AMA Superbike racing in America. 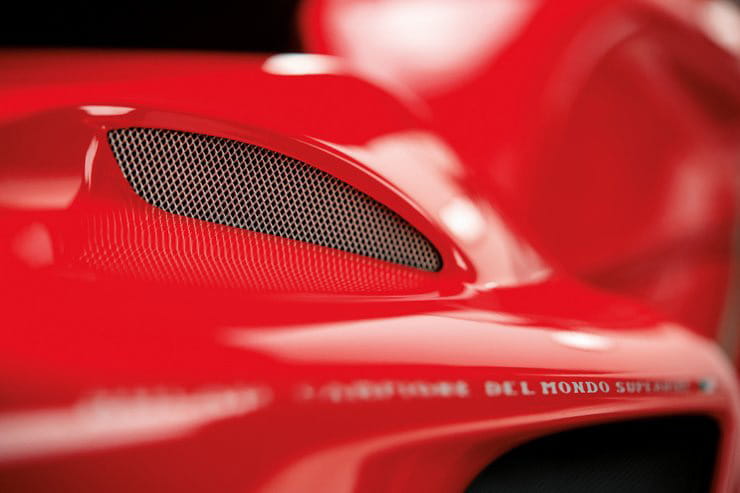 The racing-inspired changes continued with the introduction of the 916 SPS. While it added just one letter to the name of its predecessor, the latest development included a largely new engine with redesigned crankcases to allow the motor to be bored out to 996cc, pushing nearer the 1000cc limit in superbike racing. Power for the new 996cc motor rose to 134hp. A second run of 916 Sennas also appeared in 1997.

The big news for 1998, at least in the UK, was the introduction of the Ducati 916 Foggy Rep. Ostensibly a race-rep tribute to Carl Fogarty – hence being aimed at the British market – the Foggy Rep was actually a sneaky move to homologate a revised frame and airbox for WSB racing. With 202 made, Ducati produced enough to satisfy WSB production minimums at the time.

As the end of the millennium neared, the Biposto version of the 916, which had missed out on most of the race-inspired updates of the previous few years, was finally in for some love – getting transformed in the process into the 996. That number reflected its new engine capacity, which now matched that of the previous 916 SPS (it became the 996 SPS in 1999, too). 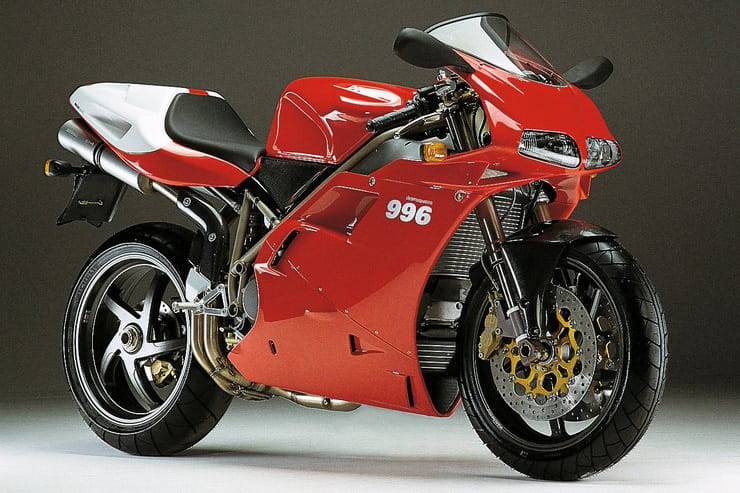 While the 916 didn’t officially exist in Ducati’s range anymore, the subsequent models still tend to generically go under the ‘916’ banner as they were simply modified versions of the momentous original. There was another capacity change for 2000 as the 996 SPS was replaced by the 996R, which despite its name had a 998cc engine – the first of Ducati’s Testastretta (‘narrow head’) V-twins. This design, with a narrower angle between the valves, allowed a bigger bore and shorter stroke, providing racing versions with a substantial power increase.

The introduction of the 998 in 2002 saw the bike’s name catch up with its capacity once again as the 998cc Testastretta engine spread across the entire Ducati superbike range. This final fling for the legendary Tamburini-designed machine also got tweaked styling, with new, flat fairing sides replacing the vented originals and making for the smoothest-looking ‘916’ derivative yet. With the 998, Ducati adopted the naming convention that it’s retained to this day – a basic ‘998’ was joined by a higher-spec, Ohlins-suspended 998S, and the homologation-special version was the 998R. Special versions included Ben Bostrom and Troy Bayliss replicas, the green ‘998 Matrix’ to celebrate the 996’s appearance in The Matrix Reloaded, and finally the 2004 998 Final Edition that was sold alongside its replacement, the Pierre Terblanche-designed Ducati 999 that had been revealed in 2003. 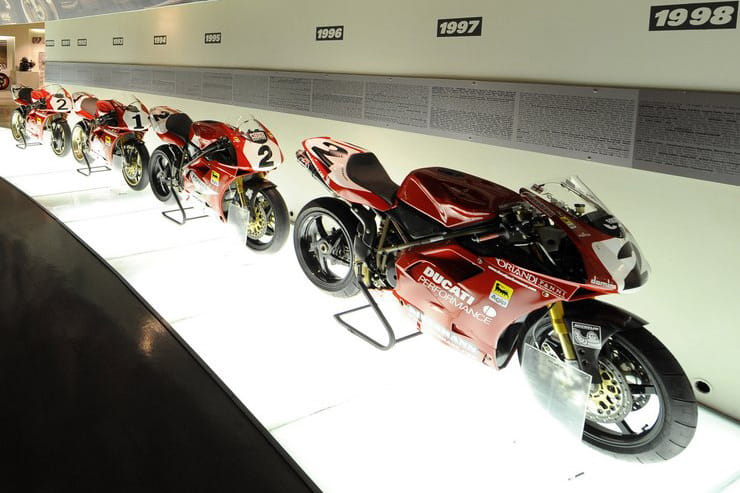 In many ways Ducati was the greatest beneficiary of the creation of the World Superbike Championship in 1988. The firm was a contender from the very start, winning the second WSB race ever held and taking its first title in 1990 thanks to Raymond Roche and the 851.

The 888 superbike would go on to win two further titles with Doug Polen in 1991 and 1992, but the 916 was the first Ducati to be designed from the ground up with the new championship in mind.

Honda won again in 2000, having given in and built its own 1000cc V-twin to compete with Ducati, but Troy Bayliss brought the crown back to Italy again with the 916’s 996R development in 2001. That gives the 916 and its derivatives an unbeaten six WSB championships. Will we ever see a bike that manages to combine jaw-dropping beauty, technical innovation and competition success to such a level again?

If your garage has a Ducati 916-shaped gap, make sure you read our buying guide here. What’s more, we’re even offering the chance for you to win one – all you need to do is get an insurance quote for your classic bike before the end of the year to get entered into the draw. More details below or here.