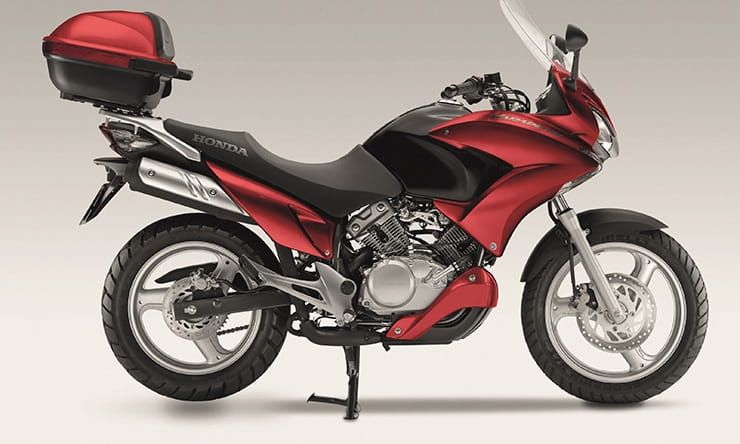 Honda’s junior adventure bike was virtually unique in using a four-stroke, V-twin engine (derived from that of the 125 Shadow cruiser) and being lavished with full-size bike proportions and equipment. The result was, and remains, even though it’s now out of production, one of the best ever 125s for taller riders. Larger proportions mean you’re not dwarfed by traffic, as is the case with many learners. OHC V-twin produces regulation 15bhp so is good for 70mph yet is completely easy and unthreatening to use. While, as a Honda, build quality and reliability is good, too, which partly explains why good used ones are still in strong demand. 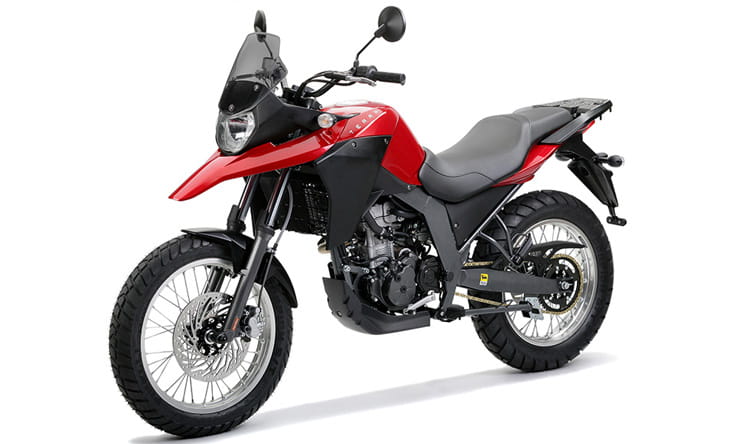 Little-known adventure-styled 125cc single from the Spanish brand (which is now actually owned by Italian giant Piaggio) is good-looking (bearing more than a passing resemblance to the latest full-size adventure bikes), decently built, reasonably equipped and good value compared to some too. Its liquid-cooled, DOHC, four-stroke single is perky and produces the necessary 15bhp and it’s also slim, a decent handler and has more than adequate brakes and suspension as well. The only downside is restricted UK dealer coverage and a high seat height, which, at 850mm, can be too much for even taller riders. 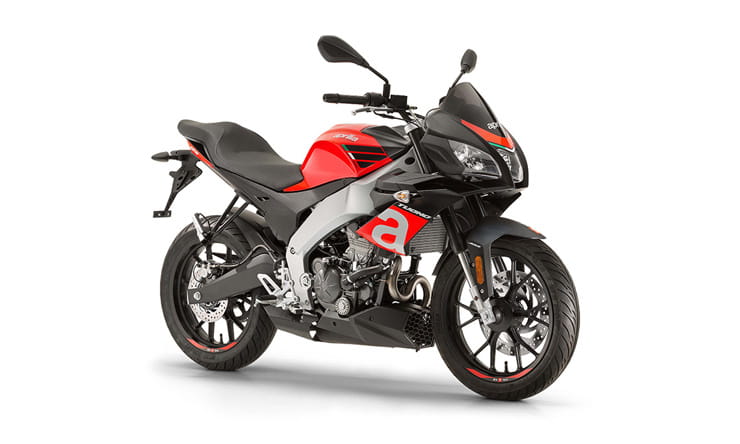 As we write Aprilia’s new Tuono 125 is so new you’ll struggle to find a used one and, at only £100 cheaper than the sports RS125 on which it’s based, is also one of the priciest new 125s around – but we still think it’s worth a serious look. Like its 1100cc big brother, the Tuono 125 is a ‘super naked’ version of a sportster brother, in this case the brilliant RS125 whereas the 1100 is derived from the RSV4. And like that bike it retains all the sportster’s equipment and credibility, including inverted forks, twin spar frame and racy styling, but in a more manageable, versatile and upright package – which also makes it better, too, for taller riders. The result is hugely stylish, easy to ride, roomy for larger riders and yet still with as much performance as its sportster sibling. 125s don’t get much cooler. 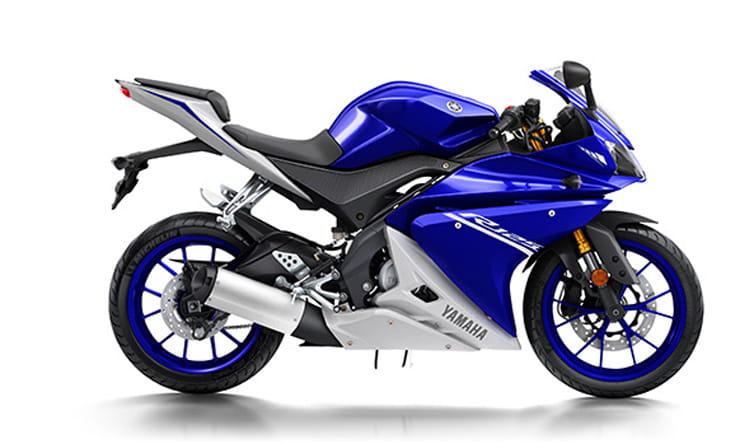 Launched in 2008 and hugely popular ever since, the ‘mini R1’ YZF-R125 is not only arguably the best of the current breed of sports learner 125s (although Aprilia’s updated and premium-priced RS125 runs it close) in being one of the larger proportioned ones (it’s basically the same size as the R6, slightly taller in fact) it’s by far the best sports 125 for taller riders as well. The junior Yamaha also benefits from a great chassis, a willing and capable Minerelli-derived, liquid-cooled, four-stroke single and styling and equipment that beats most rivals as well. Not cheap, admittedly, but if you’re tall and must have a sports-style 125, this is the one. 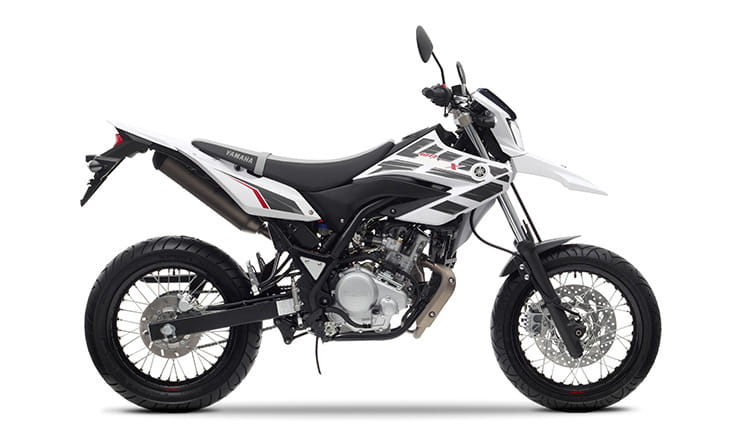 Slightly oddball, top-spec, premium supermoto was launched in 2009 and was instantly regarded as one of the best of all quarter-litre hooligan street-crossers – and easily the best from Japan. Great looks combine with decent equipment, a perky, liquid-cooled, single-cylinder engine, robust build quality and a fun yet easy to ride experience to make the WR a serious bit of kit. Better still, its MX-er proportions and high seat means taller riders suit it well. An originally high new price limited success and ultimately led to the WR’s demise but as a used buy today there’s little to fault it. 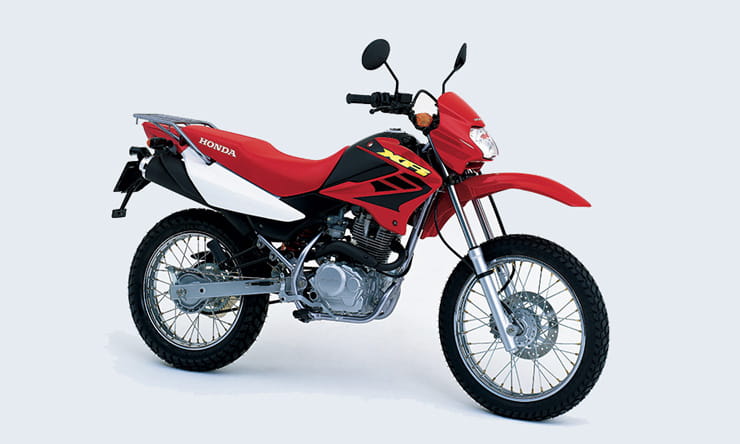 Honda doesn’t do madcap, thrill-packed supermotos – the Japanese giant is too sensible for that. But what it DOES do is great, rugged, full-sized, four-stroke trail and enduro bikes – as its long-lived and hugely popular XL and more racy XR series have proved. And when it comes to 125 learner bikes, the XR125 was a more than worthy representative and one particularly suited to taller riders. A classic, old school ‘trailie’ the XR’s tall-ish seat gives a commanding rider’s eye view and real road presence, but it’s not so tall as to be awkward. While being narrow and commendably light makes the XR a doddle and fun to ride. The air-cooled engine, meanwhile, may be a little breathless compared to more modern units, but it’s plenty for town riding and commuting. The XR looks great, is rugged and is an affordable used buy, too. 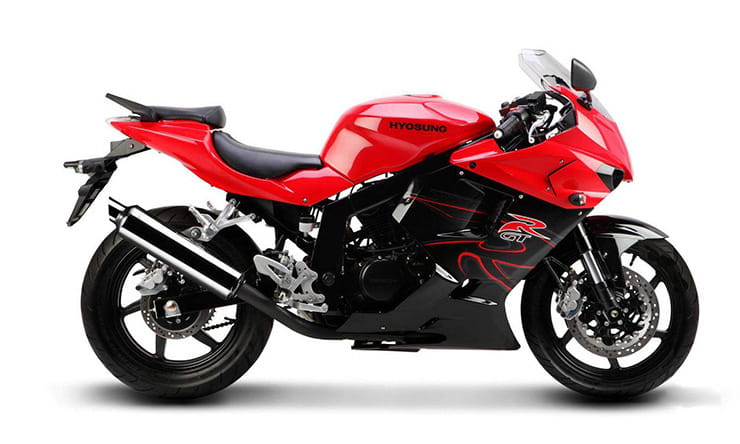 Another often-overlooked 125 – but one that’s definitely worth consideration, especially for taller riders. The Korean-built GT125R was originally launched way back in 2006 and lives on today following a series of updates and styling tweaks. But what truly sets it apart are its full-sized sportster proportions and impressive spec, which includes: a V-twin four-stroke engine (derived from Hyosung’s even older Aquila 125 cruiser, hence being air-cooled); its twin spar (steel) frame; inverted telescopic forks and more. In fact, as it also shares much of the bodywork and more of its GT250R bigger brother, the 125R could easily be mistaken for a much bigger bike. It may be aging and its build quality a little suspect, but generally the GT125R has aged well, is roomy and comfortable, performs adequately and is good value as well. 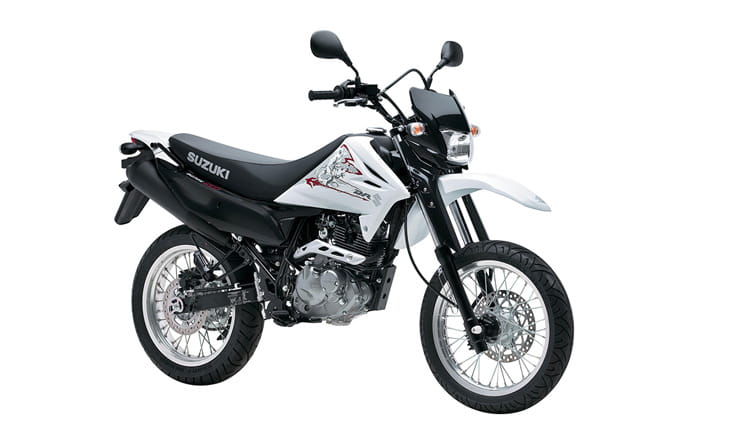 If Yamaha’s delectable WR125X is the best of the premium-priced Japanese 125 supermotos, then Suzuki’s DR125SM is the far more affordable, real-world one – and as such arguably a far more sensible buy for taller riders looking for a machine for maybe just a year’s use. As with all supermotos it’s derived from a trail bike sibling, in this case Suzuki’s long-lived, proven DR125S, and share’s that bike’s twin loop frame and rugged but aging air-cooled four-stroke motor. This supermoto version, however, adds an extra dose of aggressive style and road wheels and tyres resulting in a bike that’s roomy for tall riders, stylish, a doddle to ride, a reasonable performer and, best of all, great value as well. 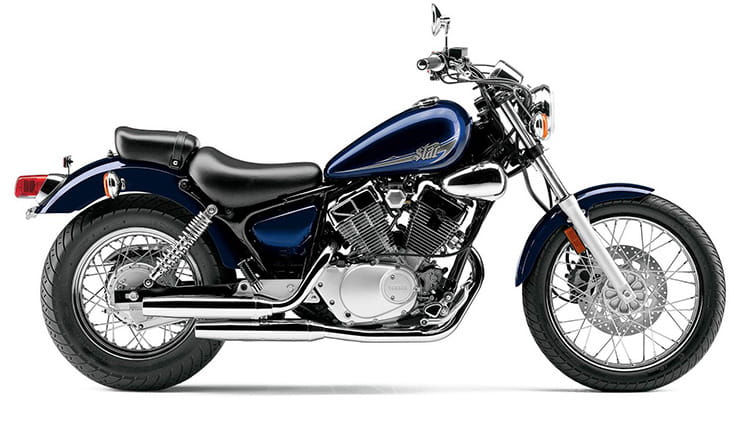 You won’t find many cruiser style bikes in this selection, as, for taller riders, their low-slung cruiser stance and ultra-low seat heights are usually the opposite of what tall riders want. But, as easy to ride learners they shouldn’t be completely ignored and of the bunch, Yamaha’s 125 Virago is probably – still – the best of the bunch, especially for taller riders. The smallest member of Yamaha’s hugely successful and popular mid-sized Virago family (which also contained a 250 and 535) the 125 shares those bikes’ roomy but novice-friendly proportions and aircooled SOHC V-twin, although obviously a smaller capacity version. The result doesn’t just look like a much bigger bike – it’s as comfortable as one while still being a doddle to ride. And although now aging, no 125 cruiser since is really any better meaning that good ones still command decent money. 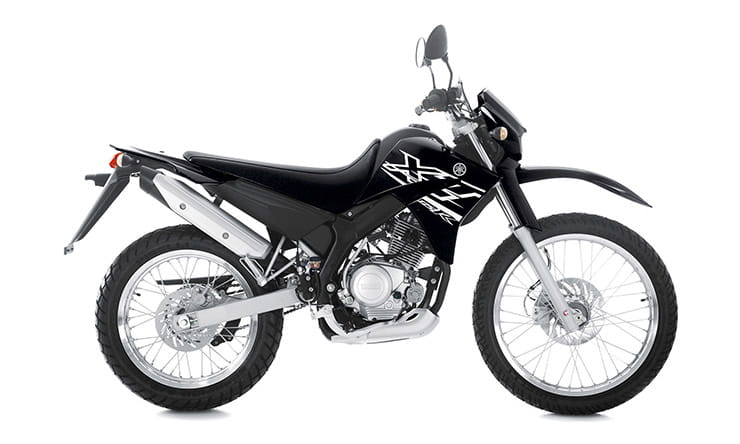 Straightforward, air-cooled, four-stroke learner was the latest in a long line of successful Yamaha quarter-litre trail bikes and remains pretty much the definitive example of the breed with a robust, easy, 12.5bhp powertrain, steel twin spare chassis and stylish looks. Being a trailbike the XT’s naturally roomier and taller than roadster or sports 125s making it more suited to taller riders. What’s more it’s proven, a doddle to ride, utterly reliable and there are plenty available to choose from. As an honest, easy, straightforward buy you can’t do much better.