Motorcycling Nudes let it all hang out 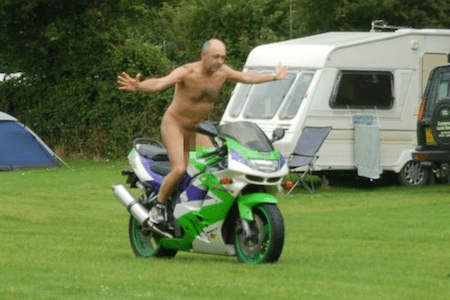 Most of us look forward to stripping off after a long, hot ride in the Summer, but this lot take that to a whole new extreme. Meet the Motorcycling Nudes, perhaps the UK’s only naturist motorcycle club!

Dave Brown hasn’t looked back since he stripped off on Brighton Beach in 1980.

It was then that the biking financial sector professional got a taste for naturism. And Brown runs a national club that brings together motorcycles and naturists.

Known as Motorcycling Nudes (MCN), the club has been fusing two very niche interests for more than ten years. And all thanks to Brown, who founded the club after getting divorced in 2004.

“It’s great. Everyone gets on and we have people from all walks of life and all ages. Our members range from people in their late twenties to pensioners.”

The premise of the club is simple: to gather together motorcycle enthusiasts who happen to be naturists as well.

“It’s a niche within a niche,” says Brown. “We have to be quite careful about members as we have had a lot of people in the past who come along for the wrong reasons.”

Consequently, Motorcycle Nudes now insists that anyone wanting to join must also be British Naturism members. 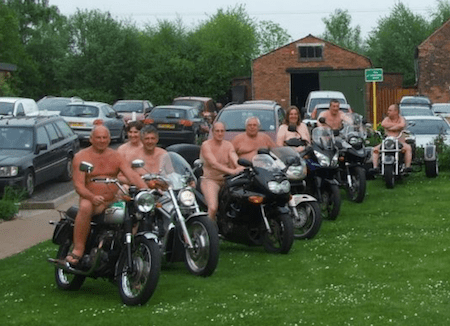 But Brown himself wasn’t a British Naturism member until 2001. And it was this that inspired him to set up Motorcycle Nudes.

“I suppose it was an early mid-life crisis. My wife at the time wasn’t interested but we got divorced and it was a case of ‘what can I do to amuse myself’ so I started going to some naturist events and decided to set up Motorcycle Nudes.”

Membership at the start of the club was modest, with barely a handful of members. But it soon grew.

“Within two years we had more than half a million hits on the site,” he says.

The club’s first meeting was at Broadlands Sun Association, near Norwich. “It was tricky because people think you’re going to be a reckless biker group and the nudity aspect makes some people wary but it worked well. There were just six of us at that event,” says Brown. “But the main thing was that we could then get in with other clubs.”

Now numbers at Motorcycle Nudes rallies can reach up to 30. 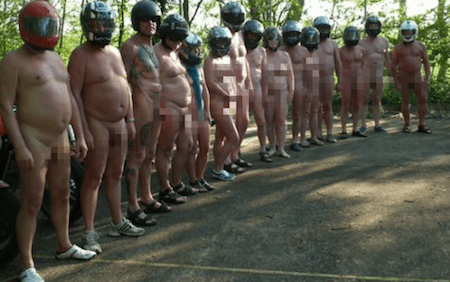 “We’ve never had huge numbers but it’s better that way,” he says. “We meet at the gathering spots used by other naturist clubs and it’s always at camps with facilities such as showers, a restaurant and a bar.”

“It’s good fun, people turn up, pitch their tent and socialise. But sometimes I arrive and I’m so hot in my leathers that I have to take them off before I’ve even put the tent up.”

Nudity is, of course, fully embraced at the various sites used by MCN.

“The facilities in most camps have a ‘clothes optional’ policy but there is one place that opens its bar to the public on a Saturday night, so nudity isn’t an option.”

This has caught Brown out in the past.

“There was one meeting and the only clothes I had with me were my bike leathers and a pair of underpants to ride home in so I ended up buying a women’s dress from a charity shop.”

In doing so, by default, Brown established a new tradition. “Now all the men wear a dress on the Saturday night at Broadlands.”

And there are parallels between nudity and motorcycling, according to Brown.

“Both are niche interests and both are viewed in a similar way. In my professional capacity I have to know someone quite well before I tell them I have a bike, because people have preconceptions. Some assume that bikers don’t have any intelligence and it can be the same with the naturism.”

As a result, Brown chooses not to disclose many details of his personal life.

But naturism and motorcycling are great equalisers.

“You see people as they are with naturism. People can’t hide behind fancy clothes and we have some very wealthy people who are members but you’d never think it - they just get along with everyone. People are interested in naturism and bikes and that’s all that matters really.”

Brown rides his Ducati ST4 to most rallies. “We sometimes have a ride-out but we have to wear clothes for that - health and safety and public decency make riding on public roads naked a bit tricky.”

But nudity aside, MCN’s rallies are always bike-centred.

“Our rallies are no different to any other bike rallies in many ways. We talk about bikes and look at bikes. The only difference is is that we don’t have any clothes on.”

Are you a member of a motorcycle club and want it featured on Bike Social? Drop us a line and tell us about your club to: enquiries@bikesocial.co.uk or put your own club on Bike Social here.