With a brand new VFR model for 2014 coming to a dealership near you soon, Bike Social looks at how Honda's VFR platform has set the sport touring benchmark for the last 28 years.

Believe it or not, for a bike that has earned itself a formidable reputation for reliability and build quality, the VFR can actually trace its roots back to some pretty disastrous mid-1980s motorcycles. 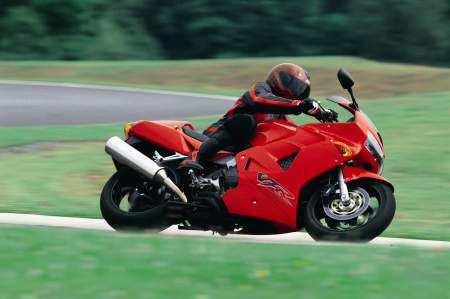 Honda have always had a fascination with the V4 engine format and while other Japanese manufacturers stuck with the cheaper to mass produce inline four format, in the 1980s Honda launched the VF range. Almost single-handedly these motorcycles destroyed Honda's reputation for reliability.

As the theory goes, a V4 engine produces the optimum power and torque characteristics. Well that's what Honda's engineers determined and looking at their V4 MotoGP bike, this is a hard theory to argue against. But there are issues. An inline four is a relatively simple and therefore mechanically robust engine, a V4 is considerably trickier.

The VF range came in three configurations - 500, 750 and 1000 and it was the 750 that soon started to go wrong. A large number of VF750s developed major mechanical issues, something that quickly lead to the model being dubbed 'the chocolate camshaft'. With the credibility of their prized engine in doubt, not to mention their reliability record, Honda needed to do something drastic – they made the 1986 VFR750F and began a dynasty that 28 years later is still going strong.

The bike that started it all 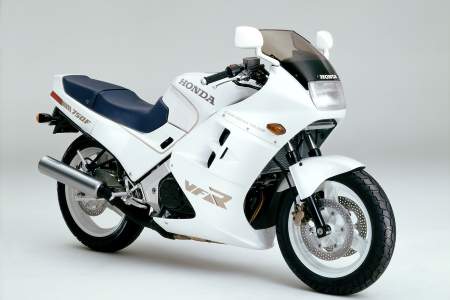 The original VFR was a truly ground-breaking motorcycle. Not only did it have a hideously complex gear-driven cam V4 engine, Honda matched this to an incredibly advanced aluminium twin-spar chassis and staggeringly high build quality. So determined were Honda to banish the VF demons, it is generally accepted that the VFR was actually a loss-leading product, meaning Honda actually sold them at a loss simply to regain its reputation for mechanical excellence. In retrospect they needn't have taken such drastic steps as the VFR was quite simply brilliant.

Despite being designed as a sports-tourer, the VFR's handling was on a par with the best superbikes of the day. Not only did Ron Haslam rock up on a totally stock VFR at the 1986 Transatlantic Trophy race at Donington and finish in an amazing third spot against the likes of Fred Merkel and Kevin Schwantz, the VFR even finished eighth at the Suzuka 8-Hour race! Against this background of success, the VFR sold like hot cakes. Unwilling to rock the boat too much, Honda tweaked the VFR in 1988 by swapping the odd-sized 16-inch front and 18-inch rear wheels for 17-inch items and making a few cosmetic changes, but essentially they let the VFR do the selling for them. 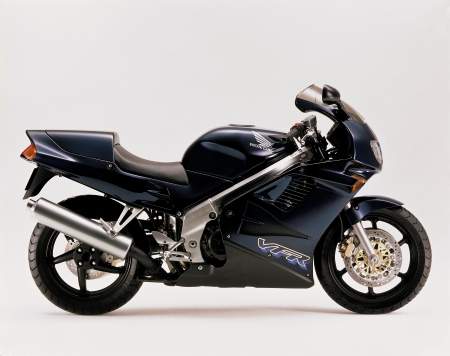 With the VFR's reputation well and truly cemented, Honda decided to add a bit of flair to the model as the 1980s became the 1990s. A major redesign saw the forks, wheels and chassis updated to keep the VFR in line with the latest technology and a brand new single sided swingarm replace the double sided item. While this was purely a cosmetic alteration, it made the VFR appear even more premium as single sided swingers were only seen on exotic race bikes such as the RC30. Who cared if this new swingarm was actually heavier than the old item (the VFR went up 17kg in weight) it looked the nuts and owners went mad for this new model.

With sales on a high, Honda once again altered the VFR in 1994 with a massive 200 changes that were mainly aimed at shedding weight and improving the bike's handling. While the 6kg loss certainly made some difference to the Honda's agility, what most owners were more impressed by was the fact this was the first VFR to come with a centre stand as standard fitment, making lubricating the chain a breeze…

The best of the breed 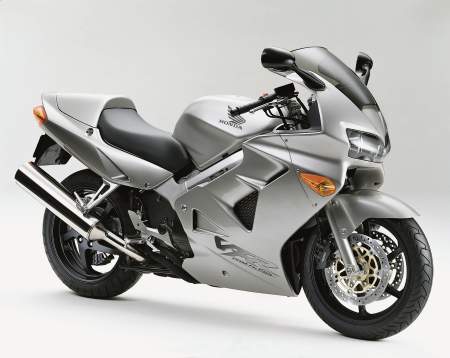 In 1998 Honda went back to the drawing board and completely revised the VFR. In doing so they created what many regard as the best example of the breed – the fantastic VFR800Fi. Powered by a brand new 781cc V4 engine that was based heavily on the RC45's lump, the VFR also gained the RC45's fuel injection system and a whole heap more midrange. With power boosted to 110bhp and torque to 59ftlb, on paper at least the improvements weren't that impressive, but spec sheets only told half the story.

As well as reducing the VFR's weight to 208kg, Honda gave it a brand-new chassis with the single sided swingarm's pivots mounted to the back of the engine and altered weight distribution thanks to side-mounted radiators. Not only was this the sportiest VFR to date, it was also the gutsiest with a wonderful V4 that was stacked full of torque. But it wasn't all good news for Honda.

Despite the improvements to the VFR, the new bike looked a bit 'plain' and owners didn't appreciate the new Dual Combined ABS braking system. In 1998 the reaction was mixed and although sales were strong, they weren't quite as rapid as before. However, this is one VFR that has matured very well and used VFR800Fis are very sought after. This generation of VFR encapsulates everything that owners love about Honda's V4, yet manages to bring it up to date without adding unnecessary complications, which is more than can be said for its update. 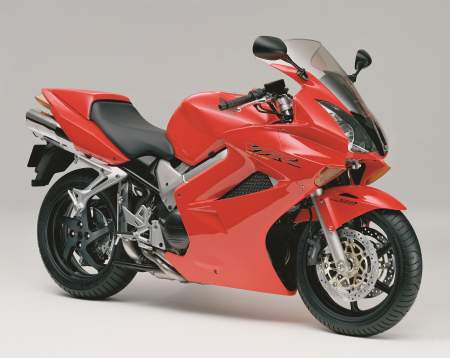 In 2002 Honda once again revamped the VFR and introduced a brand new piece of technology – V-TEC. Aimed at boosting mid-range, V-TEC (Variable Valve Timing and lift Electronic Control) was actually used on the Japan-only CB400 VTEC in 1999, however this bike was largely forgotten about and it is technology more commonly associated with four-wheels. While each cylinder has four valves, a slide pin controlled by oil pressure disables one inlet and one outlet valve per cylinder below 7,000rpm. By making the engine a two-valve motor at low revs, Honda boosted the VFR's bottom end as a two-valve motor has better low rpm combustion. When the engine's revs increase the motor requires a faster flow of air/fuel into the cylinder and the slide pin is activated, allowing the cam to open the remaining two valves per cylinder and turning the V4 back into a four-valve rather than two-valve head. On paper it was a very clever system, however in reality it had its flaws.

From the outset the VFR800 V-TEC ran into issues. Riders found the transition between two and four valves jerky and irritating. The VFR had a V4 engine and was renowned as a gutsy and smooth performer, but here was a bike that made the pillion bash heads with rider every time the motor went through 7,000rpm. Then there was the styling… 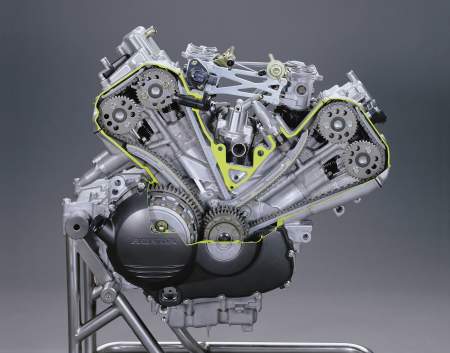 Owners rebelled against the VFR's brand-new angular look. The current fashion accessory of underseat pipes was all very good for the fashion conscious, but they made fitting panniers a pain and lost some of the useful underseat storage. The VFR was all about practicality, not trend setting, what was Honda thinking about? Sales were poor and Honda were forced to react… 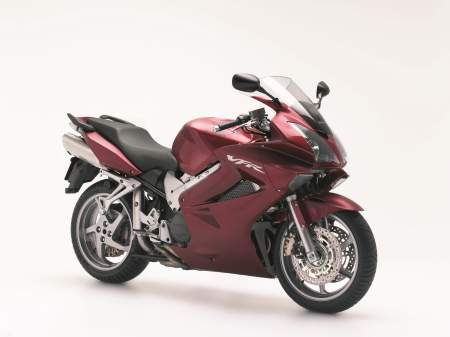 With the storm clouds still hanging over the V-TEC system, Honda tweaked the VFR in 2006 in an attempt to pacify owners. Cosmetic changes such as clear indicator lenses and new colour-matched bodywork were nothing to write home about, but the revised V-TEC timing for a smoother transition between two and four valves made all the difference. The VFR was back but by now the world was changing.

With adventure bikes taking over as the new sports tourers, Honda has left the VFR to stagnate for the last seven years. Unchanged and generally forgotten about in Honda's model line-up, most assumed the smaller VFR's days were numbered when Honda revealed the VFR1200F in 2009. It seems we were premature predicting the end of this iconic sports tourer as for 2014 there is a brand new VFR800 ready to continue this legendary dynasty… 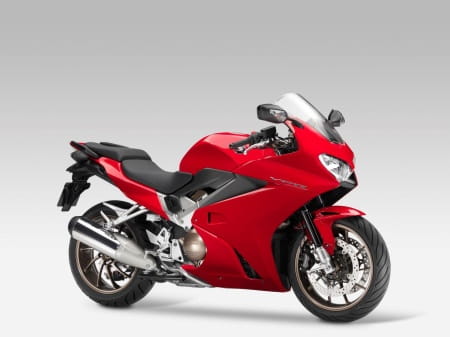