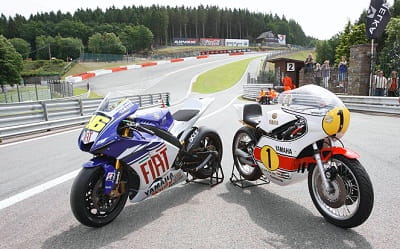 One of the world’s finest collections of classic Yamaha race bikers will make its final appearances this year.

If you’ve never seen it before, the Yamaha Classic Racing Team (YCRT) founded by former Arai Europe boss Ferry Brouwer, has announced that 2013 will be the final season for the unique team of legendary race bikes.

After ten years of travelling the world with their living display the team is packing up, but the good news is the display will be seen in all of its exhaust fuming action at the Isle of Man Classic TT in August so you’ve still got chance to see it!

Born out of a strong belief by both Ferry and Yamaha that the iconic machines of the past should not just be on display but also play a part in keeping Grand Prix history alive by running on track, the last ten years has seen the team entertain thousands of racing fans both modern and historical. 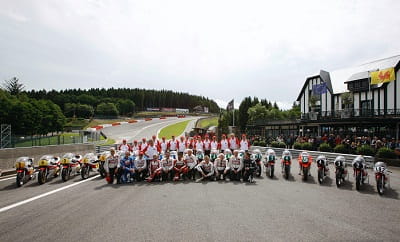 The collection includes 125 cc RA31A and 250 cc RD05A works four cylinders of 1968, the 750 – two stroke (OW31), the 1979 GP500 championship winning YZR500 and numerous other legendary bikes ridden at classic events all over the world by such famous riders as
Giacomo Agostini, Steve Baker ,Phil Read, and Chas Mortimer.

Ferry’s relationship with Yamaha goes back many years to the 1960s as a mechanic for the Japanese manufacturer’s first Grand Prix World Champion, Phil Read and the legendary Jarno Saarinen. He remained a close part of Yamaha’s early racing days before moving on to found and grow Arai Helmet Europe. He was the organizer of the 1998 Centennial event at the Assen circuit, and from organizing that came with the idea to create a running classic team for demonstration purposes. 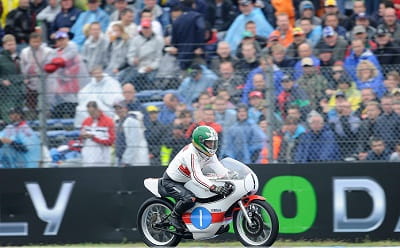 This team grew and changed, becoming more and more Yamaha until by 2004 it had become purely Yamaha and shortly after resulted in a program officially supported by Yamaha Motor Europe and the head office in Japan. The success of the team, the incredible machines and the participation of the legends who rode them originally owes to the dedication of Ferry and his close relationship to Yamaha. 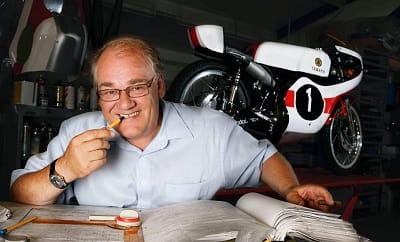 Ferry Brouwer said: “It’s a truly sad moment bringing this incredible project to a close. It has been a fantastic experience, working with both the beautiful, iconic machines, Yamaha and these really special riders. We’ve been running a classic racing team since the 1998 Centennial Event, then from within the Centennial team it became the Yamaha Classic Racing Team. It may seem like not so many years have passed but we have achieved so much and been seen by so many that we have much to reminisce about already!”

A number of the special machines from the team are under discussion to be taken over by Yamaha Motor Co., Ltd in Japan to become part of their historic collection.

Yamaha Motor Europe’s Andrew Smith said: ““It’s difficult to imagine a season of racing activities for Yamaha without Ferry and YCRT being involved. They have become in recent times so much a part of our company representing both our history and the equally important link to the present day! On behalf of Yamaha and all race enthusiasts we would like to say a big ‘Thank You’ to Ferry and all members of YCRT, thanks for the great memories and please be assured you will always remain part of Yamaha. Enjoy your next challenges!”