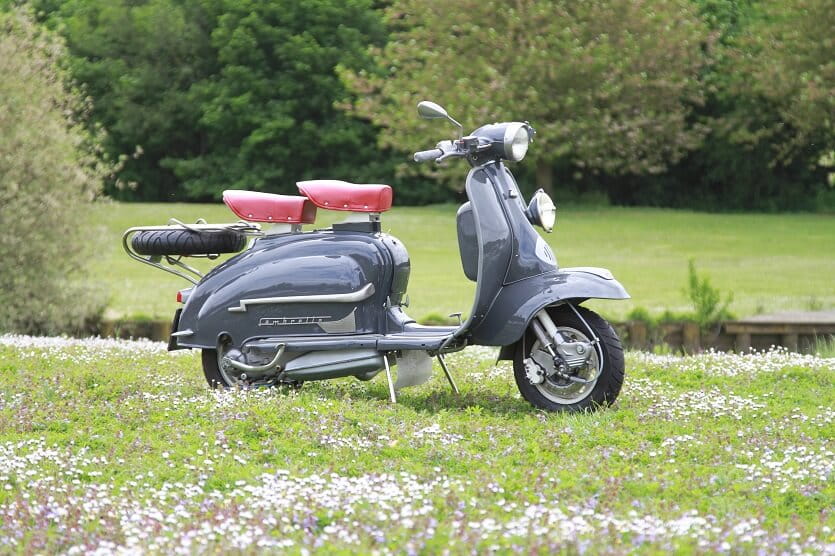 A brief history of Lambretta motorcycles

The history of the Lambretta scooter is a journey of twists and turns filled with legal wrangles and factory closures. The fact the Lambretta name is still alive can be placed at the door of fans of the original Italian Innocenti Lambretta.

Lambretta was the brainchild of Italian entrepreneur Fredinando Innocenti, who saw most of his steel pipe-making business destroyed during WWII. Innocenti realised that to recover from economic disaster, a form of cheap, personal transport was needed and, along with Corradino D’Ascanio, set about designing a machine to rival a motorcycle – but not to be a motorcycle in the true sense of the word.

Taking cues from an American wartime scooter, Innocenti and D’Ascanio set to work and quickly disagreed about the new scooter’s frame design – Innocenti wanted to utilise his pipe bending business for the frame design and D’Ascanio didn’t. This led to Innocenti going it alone while D’Ascanio went to Mr Piaggio to eventually produce the Vespa scooter in 1946 – a year or so before the first Lambretta went into production.

While purchases of Lambretta scooters were swift and plenty in the early years, affordable cars soon caused a tail-off in Lambretta sales. Surprisingly, it was UK car firm British Leyland Motor Corporation (BLMC) who eventually bought the manufacturing rights from Innocenti. But it wasn’t long before Lambretta production ceased and the factory closed in the early 70s.

Meanwhile, Automobile Products of India (API) had bought licensing rights in 1957 to produce a range of Innocenti Lambretta scooters for the same reason the original Lambretta evolved. However, another twist came with Scooters India Ltd (SIL) buying the complete rights to Lambretta in 1972, later forcing API to rename its scooters to Lamby.

SIL continued to produce scooters that were branded Lambretta on export models until sales dropped and manufacture ceased in the late 1990s. The ‘Innocenti’ name is now said to be owned by car producer Fiat, while the Lambretta brand name has been – and still is – the centre of many legal battles.

At the moment, Lambretta S.A. of the Lambretta Consortium lay claim to all Lambretta licensing rights and have started to produce Lambretta scooters in Taiwan utilising a SYM fully automatic four-stroke scooter design, but using Lambretta-like metal body panels produced in Italy.

At present there is only one modern ‘twist and go’ Lambretta scooter available, the LN125cc. There are plans to introduce several new ‘clean’ two-stroke models, and the vibrant, thoroughly modern Cigno (swan) model, available in over ten different colour sets later in 2012.

Between the first model (A) appearing in 1947 and the last Innocenti Lambretta scooter (GP200) in 1971, there was on average two-three new, or revised models per year.

All original Innocenti Lambretta models are enjoying a rise in their residual values and are much sought after by collectors. But it does take an expert of Lambretta Scooters to recognise exactly the difference between a standard original, a model that has been pieced together from pattern or Indian-made components, or a complete Indian, Spanish, South American, American model and more – the Lambretta was made under licence in many countries.

How Bennetts provide insurance for your Lambretta

We work closely with our select panel of insurers to achieve our best possible quote easily without fuss. What we do ask for is complete honesty when it comes to the use of non-standard parts being applied to the bike.

Paint schemes, restoration charges, additional components, chassis and engine tweaks must be mentioned during your quote construction because this may affect settlement figures, or level of cover if anything untoward should happen to your pride and joy.

It doesn’t matter if your Lambretta is an imported model. With the right information, from you as the owner, we can best represent your quote to our large panel of insurance underwriters and the different levels of service they offer. At Bennetts, we believe that customer satisfaction is at the top of many of our customers’ lists and we strive to top that list.

How to get a quote for your Lambretta Scooter

Lambretta scooter owners are particularly proud of their investments. With a simple telephone call to 0330 018 7990, a member of our UK-based Bennetts quote team will assist you in obtaining your Lambretta scooter insurance quote. Or you can apply for Lambretta insurance at any time by visiting our online insurance page.

We search our panel of insurers to find you our best price for the cover you need.

Sources of interest for Lambretta owners and fans

Lambretta.co.uk – everything you needed to know about Lambretta scooters is here, from the history of Lambretta through to advice forums