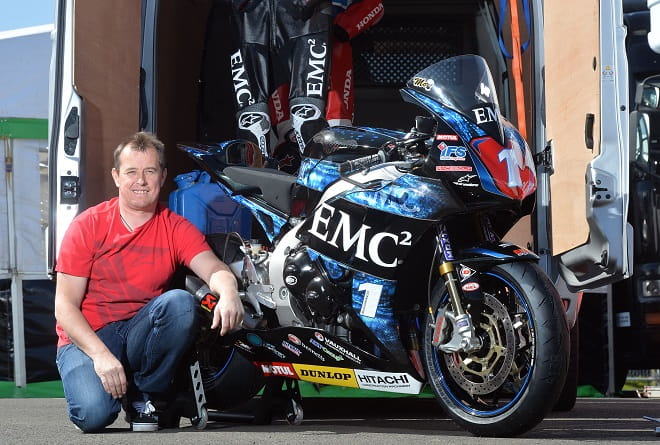 We're at lunch and John McGuinness has everyone in stitches as he talks about the TT.

He's regaling tales of 175mph slides, reminiscing about his 500cc Grand Prix days, hilarious stories about dirt biking. Generally living up to being the all-round top bloke and living legend that is the 23-times TT winner from Morecambe.

His TT Superstock bike is parked up at the Bennetts Media Day at Silverstone's Stowe circuit.

And then he turns around to the assembled journalists on the table at the Bennetts Media day and says: “You can ride my TT Superstock bike if you want. I’m not bothered, like. It’s for riding.”

I think he’s joking and have to ask him a couple of times if he meant it? “Yeah, no bother”, he says.

This is the bike that he finished eighth on in the Isle of Man TT Superstock Race last month. It’s battle scarred, dusty and full of flies squished on at 190mph down Sulby Straight. It averaged 129mph average, but wasn’t good enough on the day to get him near the podium. That’s how fast the TT just got on road bikes.

McGuinness: “I rode my balls off. It’s a lovely bike is that. A beautiful bike. But it wasn’t good enough on the day. I couldn’t ride it any harder, that’s all it had. We did our best on it is the bottom line. We finished eighth on it. We did our personal best (Superstock) lap time on it, but the TT now is so unbelievable you know?  I was trying my best. We set off from number one, I enjoyed the race the bike was riding okay, it was an honest result. It’s just a Fireblade at the end of the day, the engine has never even been out of the chassis.” 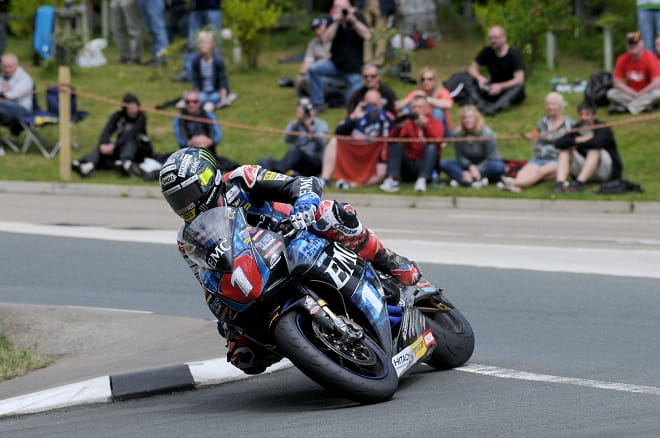 The Dunlop N-Tec tyres are tattered with a big hole in the rear from 150.92 miles of flat-out abuse at the world’s most famous and demanding road race circuit.

The belly pan bears the scars of the scary Barregarrow corner which punishes the bike and as John says ‘makes you wonder why the bike doesn’t snap in half’. It looks like it has been ground down with an angle grinder, followed by a couple of blows with a hatchet.

He said: “There are a few little battle scars, obviously. As soon as you set off down Bray Hill, a full tank of fuel, it hits the bottom of Bray Hill, and no matter where you go in the road it’s going to hit the ground. It’s scuffed the left and right-hand side, had the fairing on the left, and almost had the engine case on the left, which shows how far we’re leaning over.

But it’s the ultra-fast Barregarrow that punishes the bike most. McGuinness said: “The bottom of Barregarrow has got to be one of the scariest bits on the track. Down the hill, fifth gear, 160-170mph approach. It’s one of those corners when you go towards it you’re like, ‘Oh no, oh no, bang.’

The forces that go through the bike, the tyres, and the chassis are incredible, and no matter how hard you go through it you’re going to do some damage to the bike. But I think leaving it like that looks pretty cool. It’s like having some cool tattoo on the side of it.”

The bike hasn’t even been cleaned since the race either, as John wants to keep it this way, for now at least. Further down the line he may give the fairings up for a charity auction.

He said: “It’s got the brake dust on it, its got the inbred Manx flies on it; it is as it finished. Its got the same tyres on it. We tipped petrol in it, changed the tyres, checked the brakes pads and away we went.” 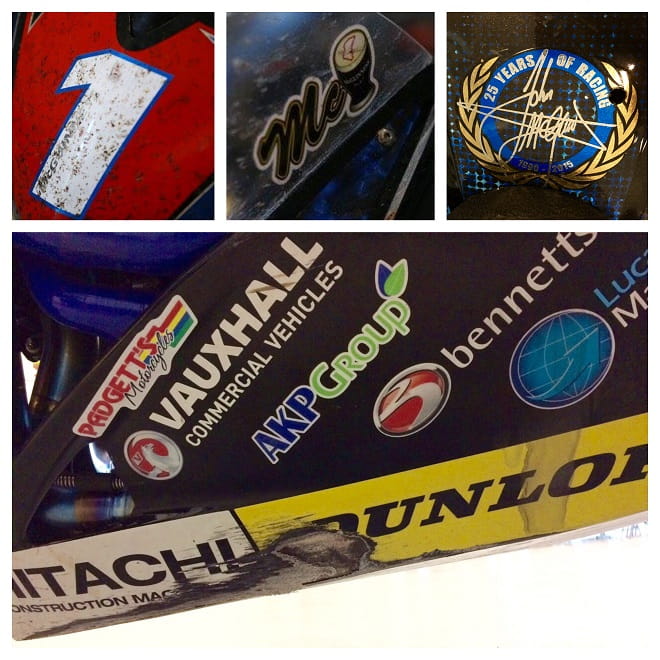 It might have one of the most recognised names in motorcycling sat on it when he heads off down Bray Hill, but this is no mega money factory-backed Honda Superstock bike. It’s backed by John and wife Rebecca’s own wallet, along with a few close friends and long-term sponsors. It’s run in his own team by Leighton Haigh and Mark Hammer who McGuinness describes as more like brothers than mechanics.

EMC are a big data company who stepped up to help him run the bike this year.

From a man who in more recent years has been run at the TT by some of the biggest teams in the paddock, he’s rightly proud of the big Blade, the team, the results, and the way they pulled it together.

He said: “I’ve enjoyed it you know, putting this little project together. There’s me, the mrs, and a few close friends. We had Mark Hammer who ran the team. Vauxhall gave us a van. I think we had a spare washer and a clutch lever and that was about it, we had nothing really, if we damaged it.

He continues: “We went to the NW200 and the TT and did our best with it. It has been a great bit of coverage for the team and a new sponsor of mine, EMC. There’s been some close friends chipped a few quid in. Bennetts themselves, Hitachi, Dunlop, Motul.”

From the race bodywork, high screen, low pegs, quickly adjustable Maxton rear shock, the secondary fuel system, and massive tank, the bike is full of small details that make sure you can win races and the bike stays reliable. There’s a foam pad on the tank which the mechanics stick the fuel cap into to stop it rolling off down the pits if it falls of the tank during the crucial refuelling. It’s a small thing but one that could make the difference between winning and losing when you’re in for a visor change, a screen clean and a fuel stop mid-TT.

It’s not beautiful like a pure-bred circuit bike can be. It’s big, and brutal and purposeful, and designed to take the most abuse a motorcycle can take on the roads.

In John’s words, it’s just a Fireblade, but it’s way more than that. Okay, so it’s not his Superbike. But it is a Blade ridden by the fastest man in TT history, the circuit record holder and the main man.

He’s about to let me ride it.

The riding position feels more sports-tourer than full-on tiny sports bike. The clocks are standard Honda Fireblade SP. The bars are mountain bike wide and that screen should be fitted to every road-going sports bike. It all just works. Like the best set-up road Fireblade you’ll ever get to ride, but on a wet, greasy track where you can only get into fourth gear. 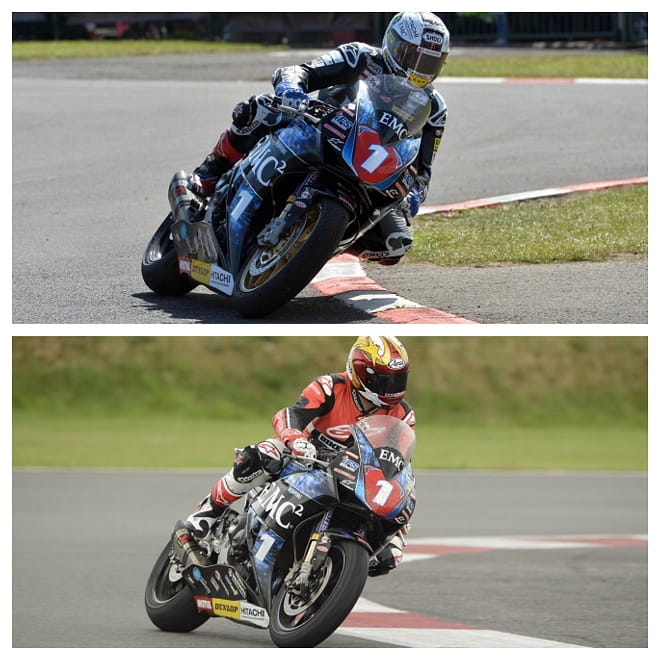 The handlebars are wide, as they always are on McGuinness’ bikes, even when he raced 250 two-strokes and a 600 in the British Championship. It’s so it feels a little more like his superbike. He said: “All the bikes I’ve ever ridden have always had wide bars. It’s just comfy for me. You’re on the bike for a long time. A TT race is a minimum of an hour and 15 minutes for four lap races, or an hour and 45 minutes on the big bike.”

He added: “When I’m braking I like to lock my arms straight. Its got low pegs on it. A big screen so you can get behind it, I find it comfortable for me. People say ‘oh, you’ll have too much leverage’ and that it won’t go as fast with the bars, but I’m just happy with it. It works for me.”

The motor may be standard but on the charge it sounds fierce, and the power-delivery is so smooth. I’m conscious that McGuinness is in pit-lane at the small Stowe Circuit, watching me ride past. As soon as I leave the pits there’s rain-spattering on my visor. It’s wet. Damn it. I get to ride a TT bike again and it’s wet! And then I remember that McGuinness said it’s a race shift gearbox. One up, five down. The quickshifter pops on the up change.

The bike is run as long as possible with the rear wheel pushed right back to try and extend the wheelbase and improve the stability. The forks are Honda with Maxton kit inside, the rear shock is Maxton. As John said, the motor has never been out of the engine, and there’s a full Akrapovic system lurking menacingly from under the bellypan. 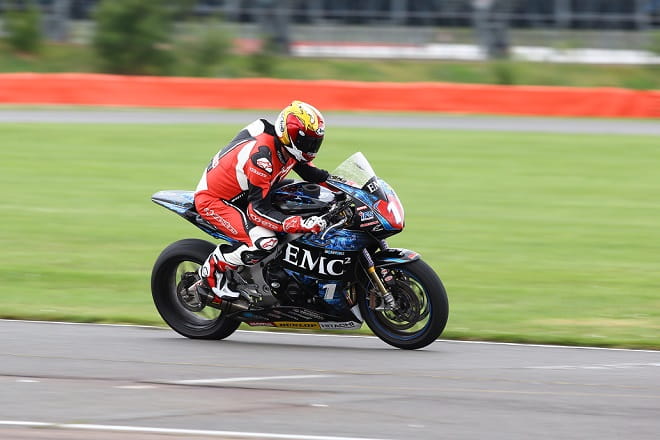 The gearing is super tall to cope with the enormous top-speed of the TT course. The footrests are road bike low.

The tyres were already warmed up by bike journo Al Fagan so feel grippy straight away, but I’m feeling for the surface on the Dunlops. The bike isn’t ultra-stiff like a race bike. It’s comfy even, but works so well. This is no ultra-fast steering beast either. Stability is the key to going fast at the Island, so it is run as long as possible and it needs tempting into the apex.

Under braking the Brembo calipers bite hard, and you can really feel what the front-end is doing, to the point where the rear wheel hops up as I over brake on the way in to one of Stowe’s short chicanes. Just pull the lever harder and it stops, no drama.

But I’m in no mood for heroics. I’m honoured to ride it, and want to bring it home respectfully to the TT Legend and after a few steady laps for pictures, bring it in all safe and sound.

Massive thanks and a few pints owed to John McGuinness for letting me have a few laps on his prized bike. 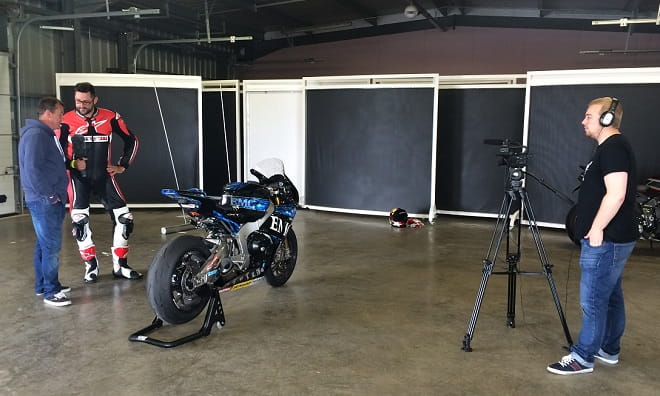