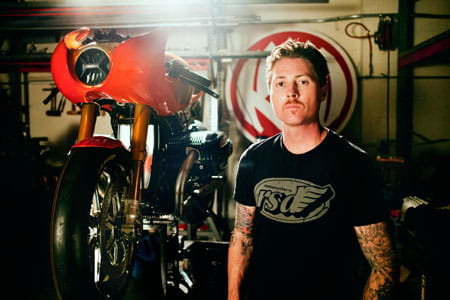 Given the amount of recent publicity it cannot have escaped anybody’s attention that BMW is celebrating 90 years of two-wheeled history this year. What may have slipped under the radar is that one of its most iconic models, the 90 S, is also 40 years old this year having first appeared in 1973 and was in fact the first production machine to come with a handlebar fairing as standard.

To celebrate, the German company has just unveiled its tribute to this model as part of its celebrations at the Concorso d'Eleganza Villa d'Este on the shores of Lake Como in Italy.

Of late the Bavarian brand has been working hard to get away from the ‘Pipe and Slippers’ image it once had and this new Concept 90 will certainly help as the company has linked up with the American custom bike company Roland Sands Design.

Former motorcycle racer Roland Sands and his team are among the elite in the custom bike scene having produced some stunning and radical creations of late, resulting in them featuring in the news as much as BMW themselves.

The original 90 S was something of a sensation boasting a top speed of 124 mph making it one of the fastest production bikes of its time. Its sporty looks and the striking ‘Daytona Orange’ paintwork which appeared in 1975 made it stand out, and lately they have become one of the most sought after machines by collectors.

No surprise then that this tribute machine eschews the same good looks, but modernised while keeping the ‘orange’ appeal. As one might expect from Sands, the bodywork is handmade out of aluminum and there are many of his signature hand crafted touches all over.

A top handlebar style fairing has been retained with a round headlamp, but this is now LED and the engine comes from a modern Boxer. Unlike most concept machines this is a bike that can actually be ridden, so it may well find its way onto our roads in the future, albeit with less in the way of hand made parts!