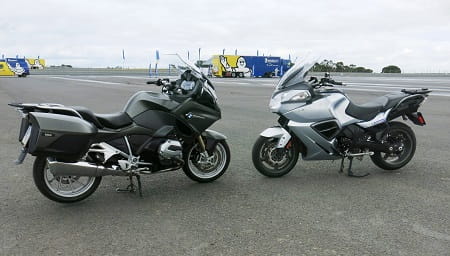 When Triumph introduced the new Trophy in 2012, it gave BMW’s benchmark R1200RT a run for its money as top dog in the sports touring class. Now, with the Germans introducing a new watercooled RT for 2014, Bike Social travelled to Spain to find out if the BMW has once again moved the class on to another level.

You have to feel a bit sorry for Triumph. For the past few years, the Brits have continued to deliver great new bikes and increased market share, yet every time they do so, it comes with claims of ‘copy cat’ and ‘derivative’. Bikes like the Tiger 800s, Explorer and Trophy seemed to be three-cylinder versions of the Bavarian best sellers, with a bit more spec for a bit less money, as John Bloor’s men smelled what sells and put a Triumph slant on it. The 800s were a massive hit, with the 1215cc Explorer definitely throwing a cat among the GS pigeons.

After the excitement of the Tiger Explorer, there was a lot of expectation of the Trophy. Sharing the same 1215cc three-cylinder engine as its off-road styled brother, the big tourer was an unashamed rival for the BMW R1200RT.
On paper, the Brit trounced its German rival, bettering the RT on spec, power and price. On the road, where it mattered most, the BMW still had it though, feeling more cohesive than the British upstart.

For 2014, an all-new version of the RT has been introduced. The new model, featuring the partially watercooled version of the 1170cc boxer twin has put on a few pounds (in both senses of the word) but feels much more refined than its predecessor.

We rode both the BMW and Triumph at the launch of Michelin’s new Pilot Road 4 tyre, which is standard equipment on the new RT, where we also had the opportunity to sample the outgoing RT too.

What’s clear is that the new BMW is far smoother and more sophisticated than its predecessor. From neat touches like the car-style instrument panels to the useful hill assist option, the 2014 just feels that little bit plusher and more advanced, even if it misses a little bit of the air-cooled motor’s character.

There’s plenty of other tech, as standard or an option, such as a new slipper clutch, gear shift assistance to facilitate clutchless shifts and electronic suspension modes. The result is a superbly smooth motorcycle with none of the clunkiness or torque reaction that could be associated with previous big boxers.

From the cockpit, the Triumph appears to have been heavily influenced by the outgoing model. The twin dial instruments are scarily close in design to the older model BMW as is the headlight cluster and general styling, minus the sticky out cylinders, of course.

The Triumph does have better performance and a healthy dose of character, but the penalty for the soulful three cylinder engine is extra weight. Modern Triumphs are renowned for their great handling and on the go it carves sweetly through the corners.

That said, at lower speeds the Trophy feels very top heavy, particularly when fully fuelled, and the throttle connection, although improved over the early versions of the 1200 triple, still feels a bit too vague and light for my liking. The upshot was that the Trophy is a bike that I really didn’t enjoy manoeuvring at low speeds. Taller riders than me (almost everyone else) may be less bothered, but the BMW proves that it needn’t be like that – albeit by using a totally different engine configuration. 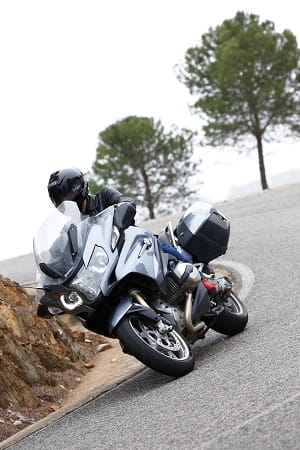 By contrast, the BMW just does everything so well. Being critical, it’s something of an appliance, a bit bland, but for a touring bike, designed to cover hundreds of miles a day, it’s pretty much on the money. At 275kg fully fuelled, the RT is a full 26kg lighter than the Hinckley bike, while the low boxer cylinders mean that it feels even more agile on the move.

One reason for all that weight is that both bikes have all the gadgets, which also makes for a rather complicated switchgear. The BMW is pretty complex and not super easy to use but the Trophy… well the Trophy sits somewhere between a 747 and the space shuttle in complexity!

Ok, so I exaggerate, but the radio controls on the Triumph in particular are truly bewildering and the rest of it is not particularly intuitive. The Triumph makes nine horsepower more than the German (134bhp to 125bhp) but in every other area it almost-but-doesn’t-quite match its main rival.

The new RT hasn’t truly moved things on to another level, but it is an improvement on its predecessor in every which way. It feels so light and agile, that it belies its bulky looks. Good as the Triumph is, it just ain’t an RT.

The other area where the Triumph does win is on value. Having quickly dropped the base model, the Trophy only comes in £14,399 SE form. BMW will do you an RT for £13,200 on the road, however that won’t have most of the Trophy’s bells and whistles and most are likely to come specced with the a good few grand’s worth of options.

Add in the Premium, Dynamic and Comfort packages (giving you all factory fit options) and you’ve spent another £2,500, while sound system (standard on the Trophy) is yet another grand.

That price difference may draw a few buyers into the Triumph camp, although these are not typically models aimed those looking for a cheap set of wheels. Both brands have their fair share of diehard fans, who’ll base their purchase based solely on the badge on the tank.

Both sets of fans have plenty to cheer about. For years Triumph enthusiasts had been asking for a ‘shaft drive Trophy’. Now it’s here, they won’t be disappointed. It’s a fine enough bike.

But for the rest of us, there’s always the BMW. It’s just that bit better.