Birth of the original Katana 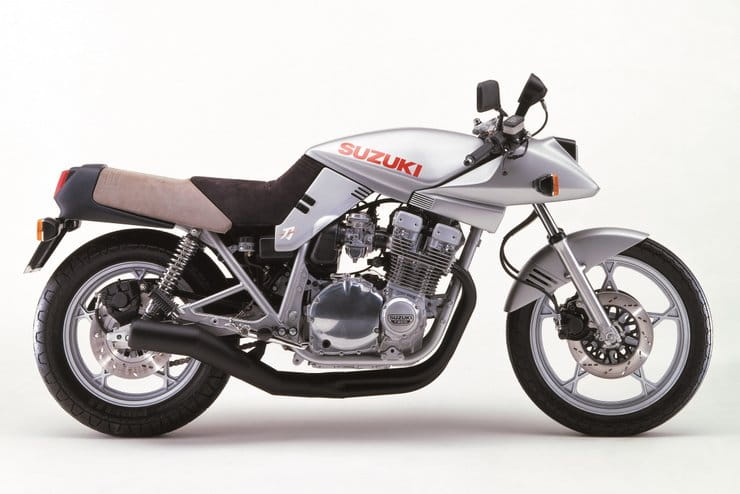 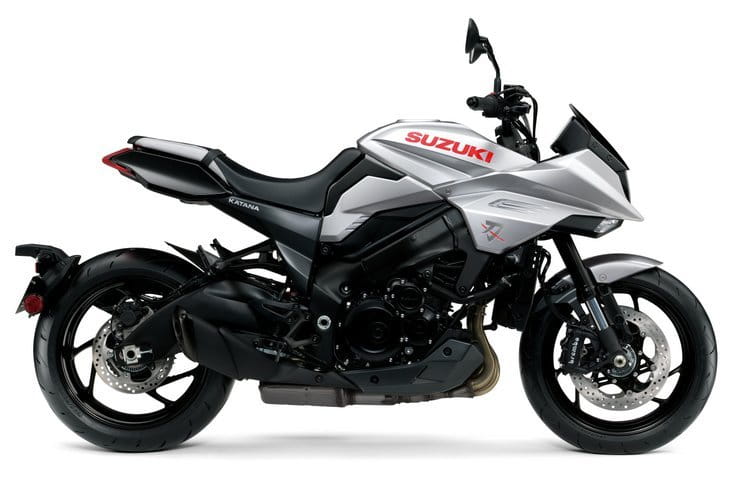 Suzuki is joining the neo-retro party next year, dusting off the Katana nameplate and affixing it to a radically re-bodied GSX-S1000. Officially a 2020 model, the new Katana is expected to reach dealers in mid-2019.

While there’s long been talk of a revival for the Katana name, the 2020 bike’s route to production has been an unconventional one. It began as a project by Italian bike magazine Motociclismo, along with designer Rodolfo Frascioli – previously responsible for bikes including the Moto Guzzi Griso, Triumph Speed Triple and Moto Morini Corsaro – and Engines Engineering. It took less than a year to go from inception to its initial reveal in November 2017 as the Katana 3.0 concept bike.

It might have ended there, but the positive response to the concept and the fact that it was achieved so simply by adding a new look to the unchanged mechanical components of the existing GSX-S1000 caught Suzuki’s attention, sparking the journey towards production.

But none of it would have been possible if a remarkably similar story hadn’t played out nearly 40 years ago. 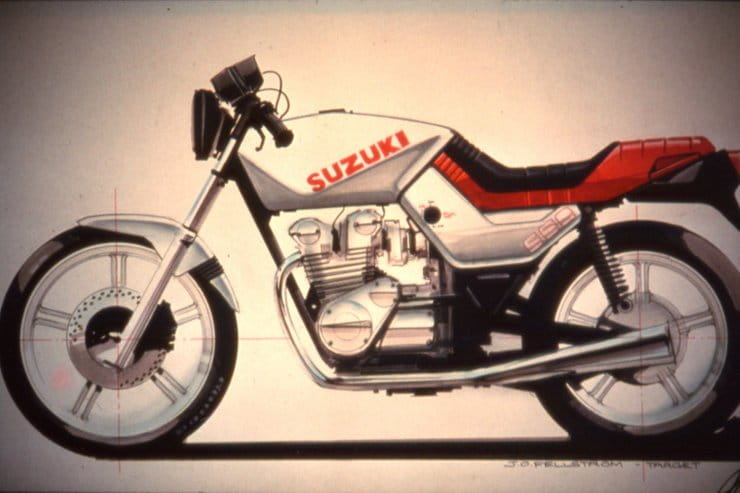 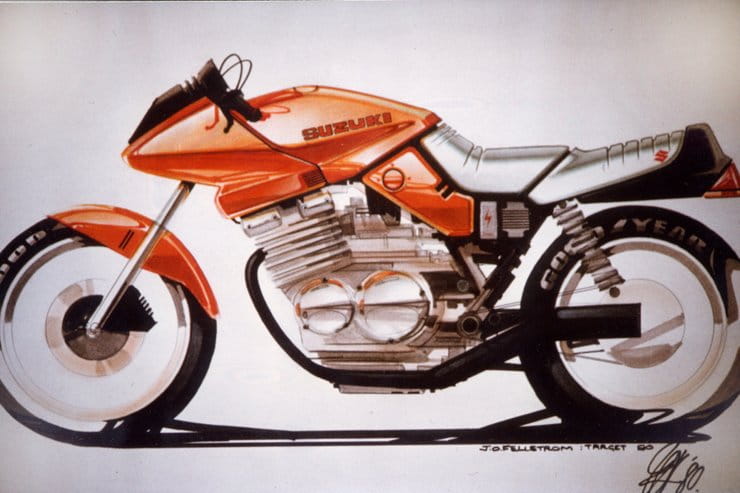 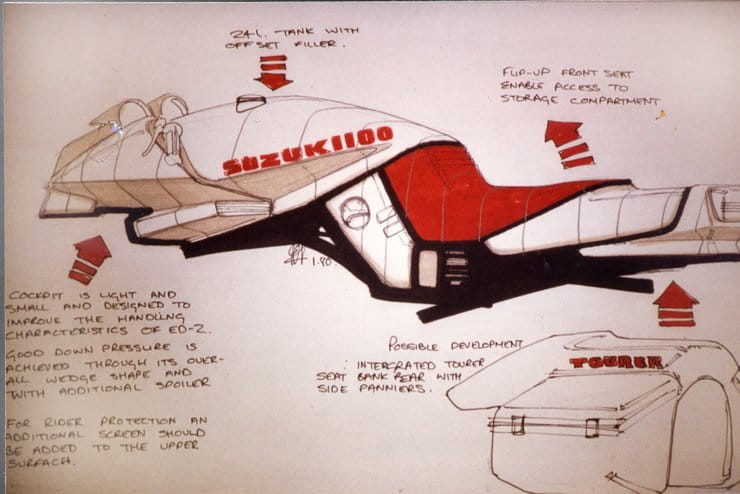 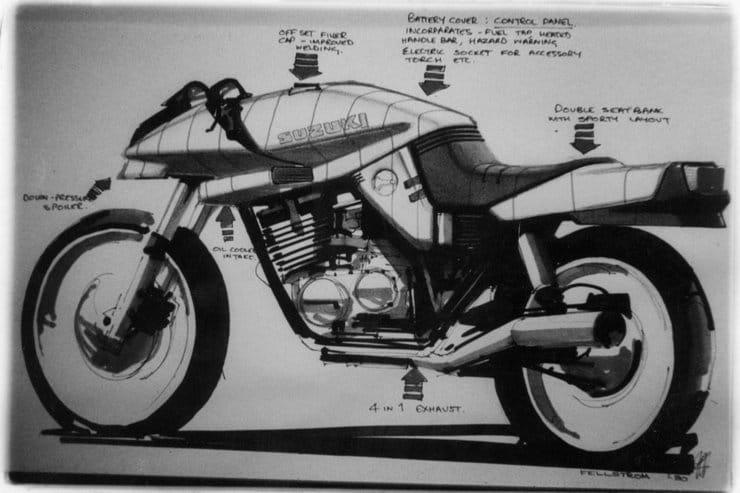 Like the new bike, Suzuki’s original Katana began life as a concept designed by an independent European styling house and rushed into production a year after it was initially unveiled at the 1980 Cologne show. Like the new bike, that original machine was based on a competent but somewhat ugly existing model, the 1979 GSX1100, and like the new bike it emerged at a time when Suzuki was struggling somewhat in the European market.

The involvement of German design company Target Design with the original Katana is well known. Formed by a trio of former BMW designers, Hans Muth, Hans-Georg Kasten and Jan Fellstrom, the Katana was Target Design’s springboard. The company is still around today, with Hans-Georg Kasten still in place as its managing director.

A couple of years ago, to mark the 35th anniversary of the Katana, I spoke to him about the bike’s birth.

“It started at the design department of BMW motorcycles in 1978,” he said, “I was in charge and I asked my friend Jan Fellstrom, who is English and had been working for Porsche, to come over to BMW. We started with projects like the BMW GS, a sports boxer bike and a concept for the K100. But at that time BMW had a really conservative technical department and we couldn’t get through with our models.

“In maybe late spring 1979, Hans Muth came and told us he had some contacts at Suzuki Germany, and was a friend of the marketing director there, Manfred Becker. You have to remember that at that time Suzuki motorcycles were incredibly old fashioned. Honda had bikes like the Bol D’Or and Yamaha had some interesting bikes, but Suzuki was the most old fashioned of the Japanese firms. Hans Muth spoke to his friend Manfred Becker and offered to create something new, fresh and with modern styling. He asked us [Kasten and Fellstrom] to quit BMW and help. At the time he was well known as a motorcycle designer thanks to the BMW R100RS. We said that if we do help, we want to start something completely new, to start a design studio on our own, with Muth as a partner. So in the end we decided to quit BMW and start a studio. Our first job was for Suzuki Germany to come up with a new design for the GS550.”

That first prototype was designated ED-1 – for European Design 1 – and impressed Suzuki enough for the firm to commission a second design based on the GSX1100. That bike, ED-2, would become the Katana. 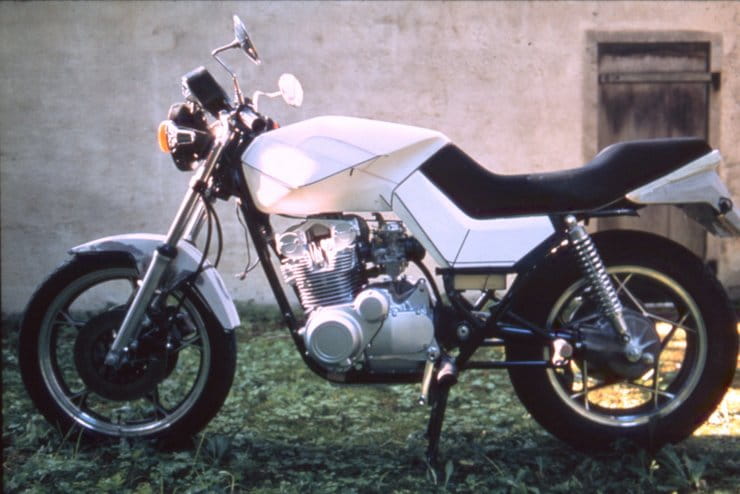 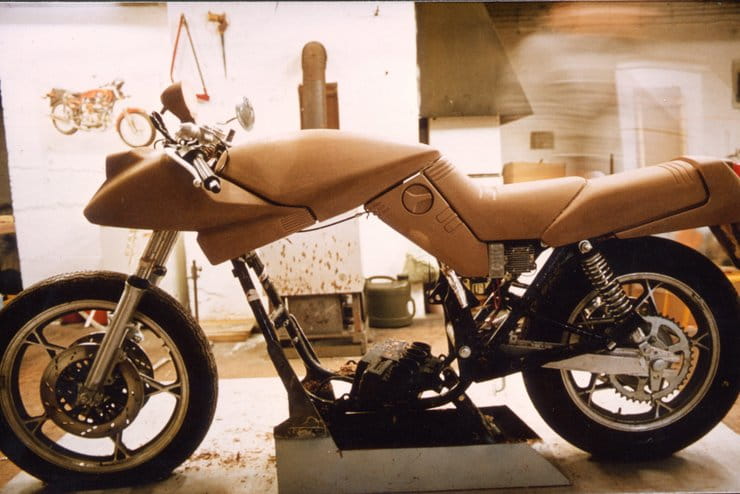 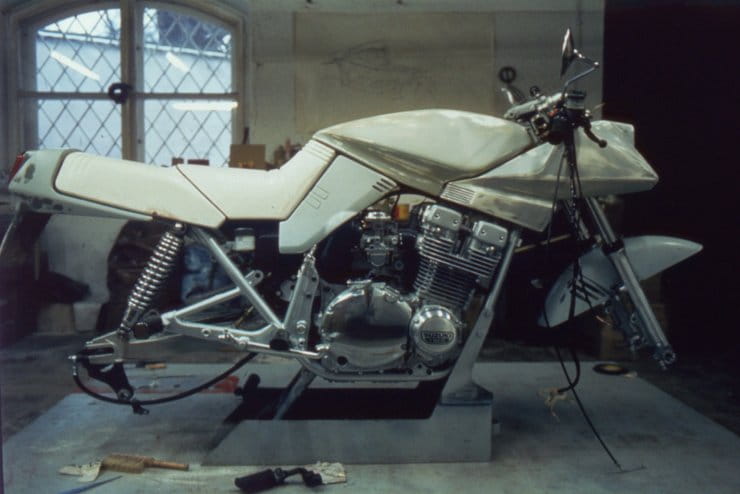 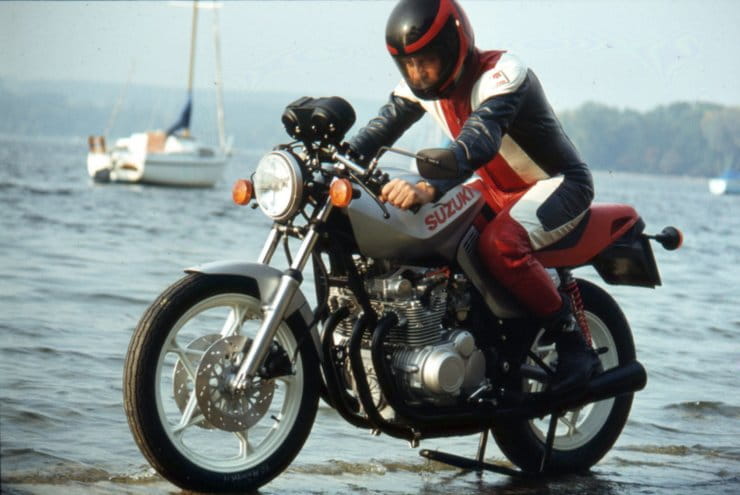 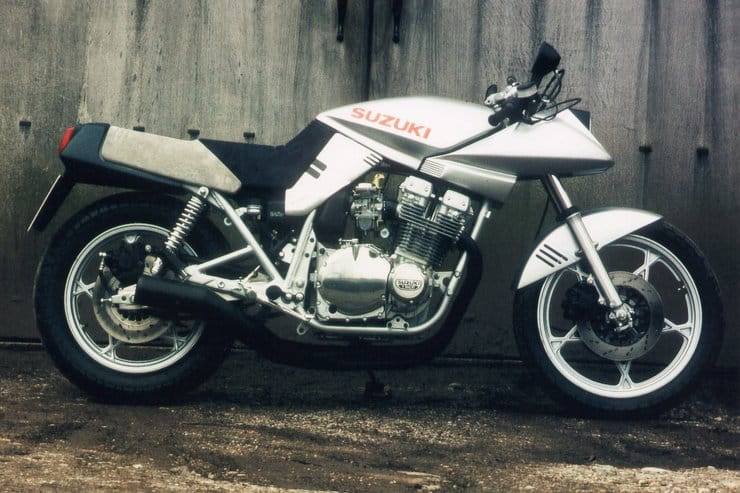 ED-1 and ED-2 concept under construction, plus finished concepts

Kasten said: “In the autumn of 1979 we presented the ED-1 model to more people from Japan and they took it over to Japan to put it into production. Then they asked us for a second job, on the top-of-the-line model. The first GSX1100, designed in Japan, was incredibly ugly, and they asked us to change that design as quickly as possible. For this reason they said not to make any technical changes, just make complete new bodywork. We started in November 1979 with two-dimensional drawings, and sent them to Hamamatsu. They liked it and asked us to put it into three dimensions, so we made the clay model, the mock-up, and presented it in Japan. From there they really hammered it into production.”

Place a Katana next to any of the rival four-cylinder Japanese superbikes of the late 1970s and early 80s and it looks like it’s from another era entirely. At the time, most naked bikes were made of very distinct, individual components; a seat, a fuel tank, a headlight, with little in terms of styling to harmonise them. Target Design decided to bring the whole lot together, setting a trend that has influenced virtually every bike designed since then.

“Something like this can’t happen very often,” explained Kasten, “If people like us are asked to produce something new, we will be told we should think about how conservative people are, that we should be careful, shouldn’t be too futuristic. Our chance here was that Suzuki did not expect anything. We could do what we wanted.

“At that time there weren’t many professional designers working on motorcycles. Motorcycles then were a tank, a seat, a battery cover. They might be changed and modified a little bit, but nobody saw the complete motorcycle as a sculpture. We had a lot of experience from Porsche [both Kasten and Fellstrom were Porsche designers before moving to BMW], which was a good education, and we learned a lot from BMW about ergonomics.”

Despite the Katana’s radical appearance, the styling was largely driven by ergonomics and an attempt to make a large fuel tank feel small. Kasten said: “If you have a small tank, it’s nice but you don’t have the capacity. If you have a fat tank your knees are at an angle that doesn’t give a good feeling for the bike anymore. So we thought about how to solve that problem and the answer was to shape the tank in a way that you can keep your knees narrow, and above your knees it goes strongly to the outside to create volume. This is the basic idea of how the Katana tank was developed.”

The Katana’s other notable departure from convention was the headlight, which was firmly mounted to the frame rather than turning with the bars as was the norm at the time. Kasten attributes the idea to a particular moment at BMW.

He recalls: “At BMW we had a department that tried new things, and they had an interesting bike that was a boxer turbo; at that time a turbo was something very new. I asked them to give me the bike for a weekend to get some experience with it. The base was an R90S, with the fairing just around the lamp. I went really fast and suddenly this bike was shaking its head. There was too much weight and aerodynamic forces on the steering. You didn’t get that with the RS because its fairing was fixed to the frame. So when we did the Katana we wanted to make a bike without a fairing but we decided to solve this problem of shaking by fixing the headlamp on the frame, with just a small cowl. That was the concept idea behind how to make it. We were handicapped because we had to use the existing headlight, but this was our feature and we tried to make it really good looking.”

Both the 550cc ED-1 and the 1100cc ED-2 would make their debuts in September 1980 at the IFMA Exhibition in Cologne. Despite the fact that they were merely mock-ups at the time, production started within months and the Katana legend was born. 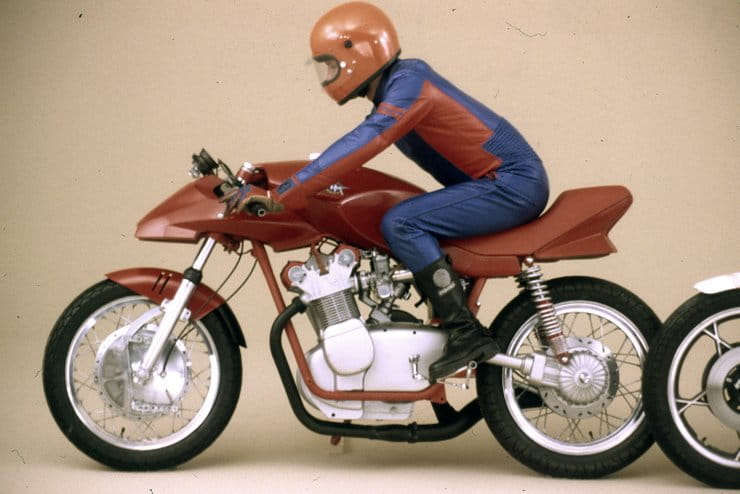 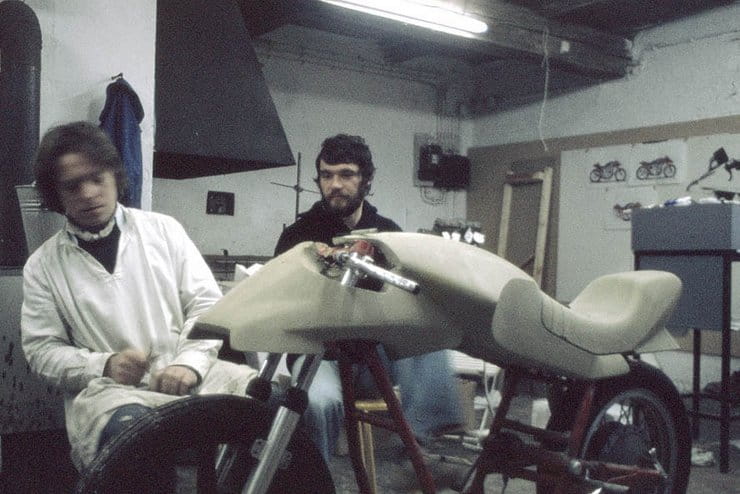 History has repeated itself with the new 2020 Katana’s route to production via a magazine-sponsored concept bike, because that’s where the first clue to the original Katana could be seen as well.

While the first sight of the truly representative Katana came at the IFMA Exhibition in Cologne in September 1980, there had been a hint at its shape months earlier thanks to another Target Design creation, built for German bike magazine Motorrad.

Motorrad asked Target Design and two other firms to each imagine their bike of the future. Target Design’s creation was based on a four-cylinder MV Agusta, but clearly bore lines that would be seen again in the Katana.

Kasten said: “Motorrad had a yearly magazine called Motorrad Revue, and they asked three designers about their dream bike. They asked Giugiaro of Italdesign, they asked Ferdinand Alexander Porsche of Porsche Design in Austria and they asked us. For us it was the first showing for our studio.”

The MV’s bodywork, with its nose, tank and side panels all merging together, showed the same thinking that would later appear on the Katana.

The original MV’s location is unknown but at least two replicas have been made. One was built by using the original moulds and Target Design itself made another a couple of years ago, having recreated the styling on modern design software.

While the original MV Agusta might have disappeared, the original ED-2 mock-up that debuted the definitive Katana styling back in 1980 still survives today. After its show history, the bike eventually made its way to the Fritz Ehn museum in Austria, where it remained until it came back to Target Design’s attention in the early 2000s. Kasten offered to restore the shabby-looking bike back to something approaching its original show glory during the firm’s free time.

Repaired and repainted in 2006, it went back to the Ehn museum, but was sold – along with the entire contents of the Fritz Ehn collection – by Bonhams in 2008. It might have been a non-runner, but the £10,350 price it achieved there seems like a snip for such an iconic piece of motorcycle design history. American Katana collector Ken Edgar snapped it up, shipping it to the States where it joined his zero-mile 1982 Katana and Wes Cooley Yoshimura race bike.