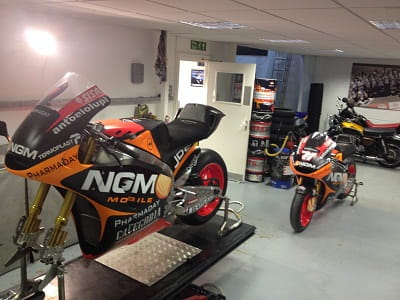 It's not every day you bump into a 220bhp ex Colin Edwards MotoGP CRT bike on a random Thursday at a workshop  in Silverstone, but then IDP Moto is not just your average bike workshop.

“I’m preparing the two bikes for sale, they’re £150,000 a pop. This one is going down to the Sports Bar in London for display.” says IDP Moto Owner Daryll Young as he puts some new brake discs on the hand-built MotoGP CRT bike.

This is the same Kawasaki  ZX-10R-powered machine that contested the MotoGP world championship in 2013 with the Colin ‘Texas Tornado’ Edwards on board. It finished 14th in the 2013 MotoGP World Championship, with a best finish of ninth place at the Catalunya Grand Prix. And now the hand-built bike is sat in a random workshop in Silverstone. It’s all carbon-fibre, gleaming milled aluminium. The finest work from FTR’s factory, and now it’s here still looking brand new and ready for sale to one lucky (rich) collector, even after a year of abuse.

IDP Moto have forged a relationship with FTR Moto who are based just down the road in Buckinghamshire. IDP owner, Daryll also recently collected and delivered Colin Edwards’ 2014 customer Yamaha M1’s too.

With the Edwards bike on the bench, and a few other things tucked away, we couldn’t help have a sniff around the rest of the workshop, and we're pleased we did.

Look around and it’s like any other regular motorcycle workshop – a load of customer bikes in for oil changes and fixing up, the odd club race bike waiting to be prepped, and an immaculate work bay surrounded by the finest Snap-On tools.

On one side is a fleet of blue Yamahas used for the California Superbike School which shares the premises with IDP Moto. But beyond race bikes, and sports bikes, IDP Moto is beginning to get itself a name for restoring modern classics. They're keen to be getting more involved with creating a new breed of customised bikes, and there’s another one about to hit the project bench.

In reception is an immaculately restored Ducati 916 with a pile of MCNs next to it featuring the exact same bike on the cover. It’s a bike owned by motorcycle journalist Jon Urry. IDP Moto did all the work on the bike for the recent MCN feature. He’s had enquiries to rebuild three more 916s since that feature. 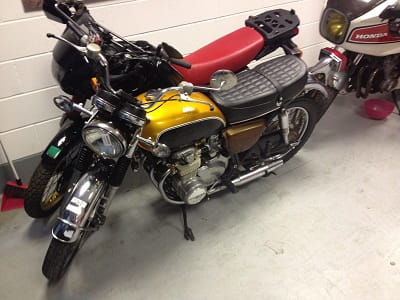 In the corner sits a CB550 Honda that has another famous owner – one factory Honda WSB rider by the name of Jonathan Rea. He’d seen the Honda Dominator that IDP Moto had previously built for Pata Honda PR man Steve Booth and wanted something similar, but based on a CB500.

Daryll says: “In truth he’d seen a bike online that he absolutely loved and wasn’t especially bothered what model it was as long as it looked right.” Daryll sourced a CB550/4 that had been imported through D&K and is about to start work on making it a modern customised classic for a very famous owner.

Next to it is a Honda Dominator that had once been a Honda UK press bike for bike magazines like Ride, but has since had a few more owners. It too is about to get a new leases of life and will be turned into a street scrambler for former MotoGP star Jeremy McWilliams. We’ll keep you posted on its progress.

And if you want to buy one of the MotoGP bikes, give IDP Moto a shout.