Where do stolen motorcycles go? Rung, cloned, stripped or exported? 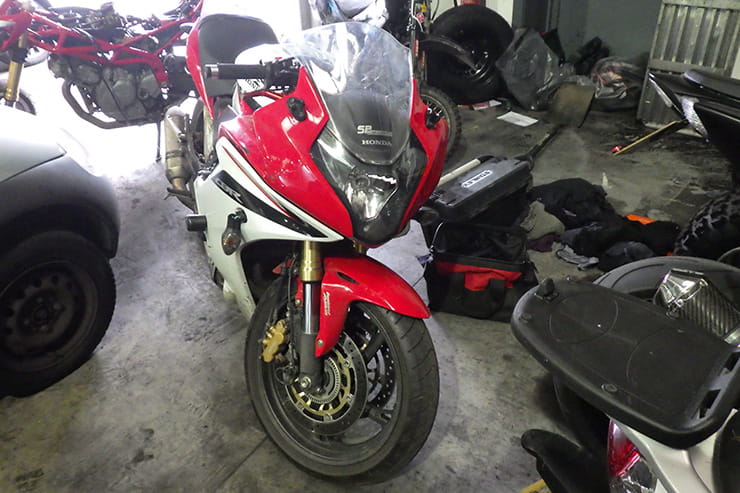 What happens to motorcycles that get stolen?

There’s plenty of evidence that stolen bikes are exported, shipped out of the country never to be seen again, or broken for parts.

Parts, especially fairings, lights and other bits that are easily damaged in a minor spill, can be very expensive to buy brand new, so the option of a cheaper part in good condition can be very tempting.

And the profit’s even more tempting if you’re the kind of person selling something that you’ve stolen.

Then there are clones and ringers, which are essentially different things: ‘Clones’, especially in the car world, are vehicles that have had nothing more than the registration number changed. This fools ANPR (Auto Number Plate Recognition) cameras for a while, but they get found out eventually and are usually used by criminals who are using a stolen car or bike for transport, or people using the reg number to evade insurance or congestion charges.

Stolen motorcycles are cloned like this to allow criminals to simply blend in with everyday traffic as they run around on “their” stolen bike.

Then there are ‘ringers’; stolen bikes and cars that have had the full identity of a legitimate vehicle placed onto them, before being sold onto an unsuspecting member of the public. This is often thought to be a problem exacerbated by online selling sites like eBay, Gumtree an Facebook allowing the sale of the V5C and frame from a motorcycle.

A ‘ringing kit’ is a term that gets used, but is it a real problem and is it even illegal? 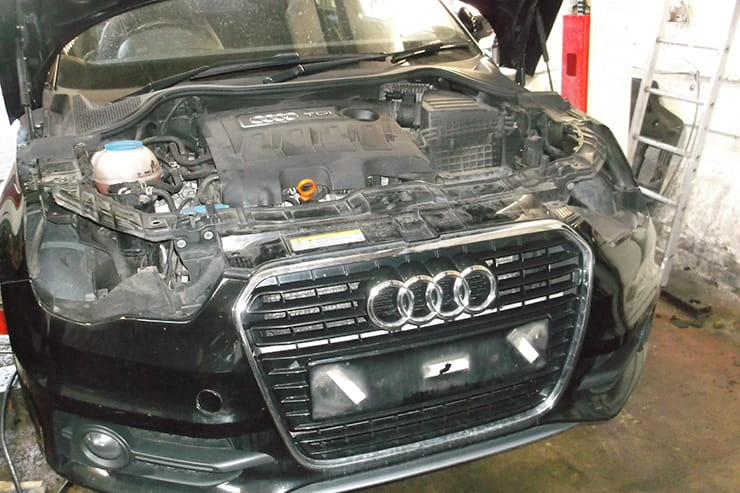 Is the sale of motorcycle frames and V5s fuelling bike theft?

Before we slate companies for assisting organised crime ,we need to have a good look at what is actually happening and how we got here…

In 2002 the Vehicle Registration and Licence Act came into being. It details how a vehicle  (that word’s important) gets its identity, which in turn gives you a V5C – the registration document. The legislation also states that you must inform the government upon the destruction of the vehicle.

In 2003 we got the End of Life Vehicle Regulations, which detail what you must do if you scrap a car, van under 3,500kg or a three wheeled vehicle, and where you can do it. At the end of the process a Certificate of Destruction is issued and you’re no longer liable – as the registered keeper – for its registration and taxing. And it’s better for the environment as the parts are properly disposed of or recycled.

But hold on, where does it mention motorbikes?

You can scrap a bike, but you don’t have to go through a special process to do it; you can just SORN it (tell the govt it’s off the road through Statutory Off Road Notification), sell all the valuable bits, throw the rusty or crashed bits in the bin and keep the frame because you’re going to do it up one day. Everyone likes a project, don’t they?

Then you get bored, the project doesn’t happen, and you decide to sell it online. Along with the V5. Is that illegal? 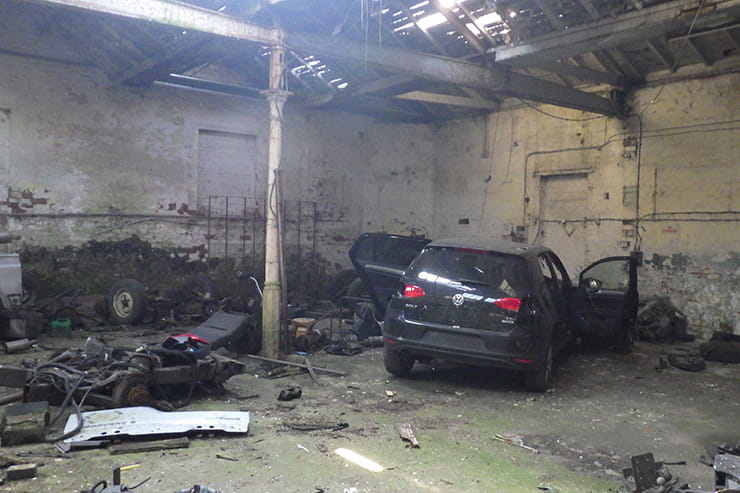 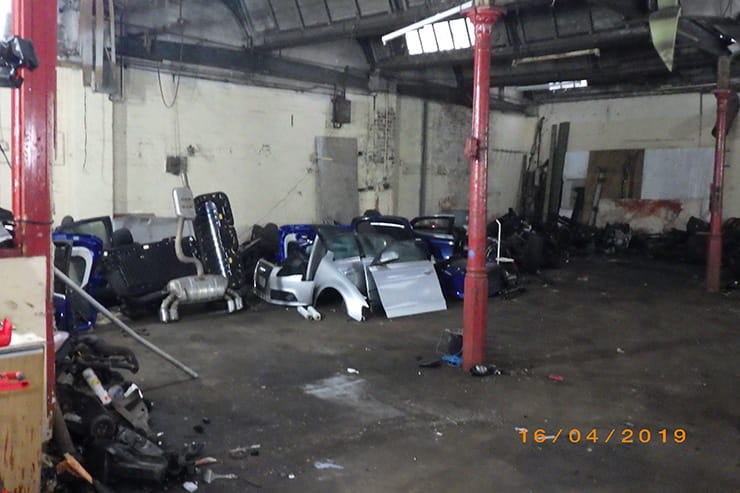 A chop shop – where vehicles are stripped or given a new identity – taken down by Merseyside police. Photo: Merseyside Police

Is it legal to sell a frame and V5?

Selling a V5 and motorcycle frame isn’t illegal. What someone does with it afterwards might be through, especially when you look at the government’s regulations on radically altered vehicles.

You are not allowed to place all of the crashed bits from your bike onto a second-hand frame and retain that bike’s registration number.

To legally build a bike that way, you would have to have the frame and accumulate at least eight points from the donor bike:

So with the trading of frames with IDs being legal, that’s got to be a bonus to a criminal with a stolen bike, who can buy the frame and ID before transplanting all the parts onto the frame and sell it on, right?

Well, yes and no.

Is motorcycle ‘ringing’ a real problem?

Sure, the opportunity is there, but there are a lot more cars and vans on the road, and that’s where the quick money is.

£16,000 is relatively pricey for a motorbike, but a Ford Fiesta starts at £16,000. And there’s thousands of them, along with any number of other cars and vans.

That’s the big ringing issue: cars and vans with their massively bigger markets. Why go to the bother of ringing a motorbike when the profits are so much bigger in the car world?

Not convinced? Merseyside Police told us that in the last 18 months they haven’t come across a single rung motorbike. 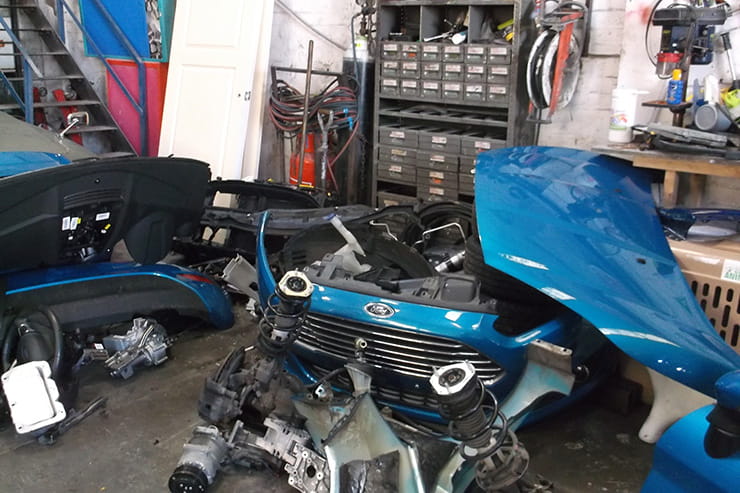 “As far as V5s being used for re-registering/cloning stolen bikes go, I’ve not had any dealings in Merseyside,” Constable Jamie Orme from Merseyside’s Vehicle Crime Group told us. “During the period of the past 18 months, the Vehicle Crime Group has attended in the region of 12 chop shop warrants, resulting in excess of 100 outstanding stolen vehicles being recovered, ranging from complete vehicles to component parts and documentation.

“This does not include the stolen vehicles that are recovered on a daily basis, or located during other warrants where stolen vehicles are being stored among other privately-owned vehicles, such as motorcycles and/or quad bikes that are being kept in storage compounds or container yards.” 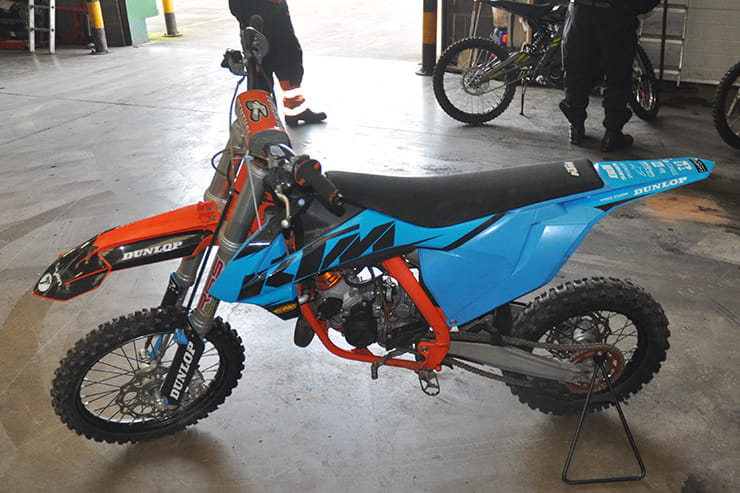 A stolen KTM 85 SX that was recovered after being stolen in a Burglary in Wigan and recovered in Merseyside. Photo: Merseyside Police

Merseyside Police have also seen bikes that have had all identifying marks removed and simply used as currency between gangs to run around on.

Even though all the identifying marks have been removed, covert security markings such as those from Datatag and SelectaDNA mean that bikes can be traced back. 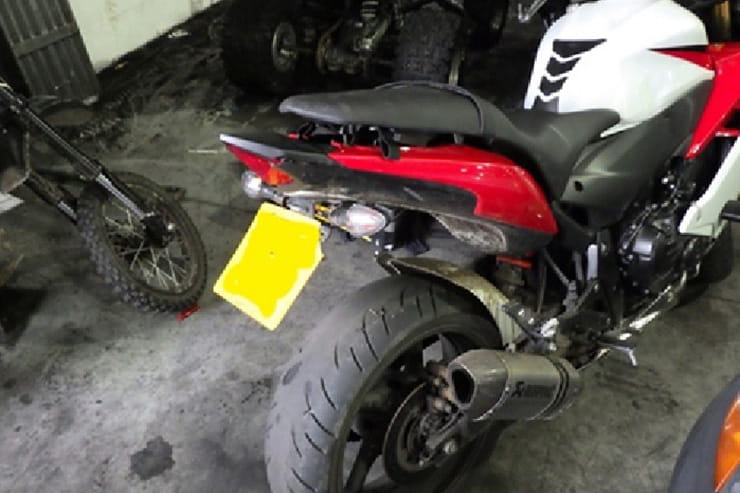 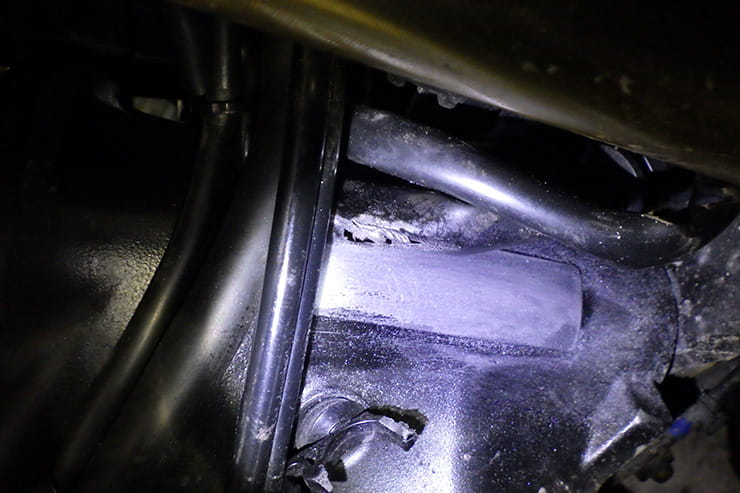 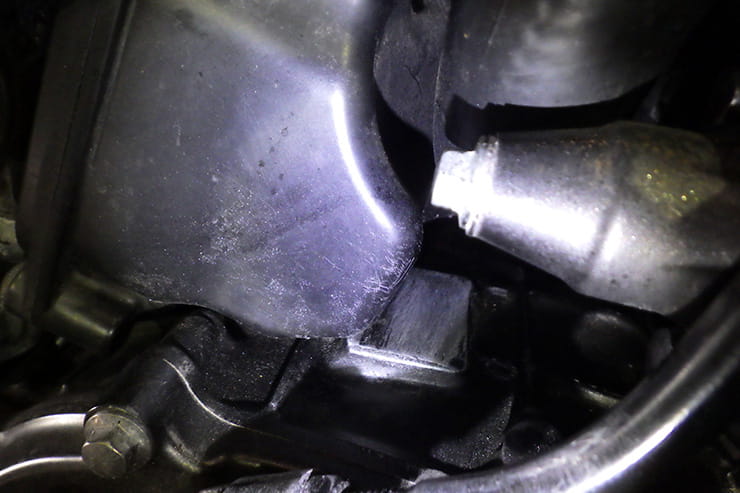 A Honda CBR 600 that had been stolen in Devon and Cornwall, then recovered in Merseyside. It’s main identifying numbers had been removed, and it was simply being used by organised criminality to run around on. Photo: Merseyside Police

As Merseyside is one of the areas identified by the Motorcycle Action Group as one where a bike is most likely to be stolen, does this force’s experience line up with the rest of the country?

London is the area where the same survey identified the biggest chance of having a bike stolen, so we asked Stolen Motorcycle Recovery London, who have a pretty good ear to the ground, what their experience was. Here’s what once of the team had to say: “We are finding that, while most bikes are stolen purely to be stripped down and sold on legitimate websites such as eBay, or for export to other countries where they will be sold, certain models are attracting additional interest from theft groups.

“In particular, bikes where a specific frame is used on both the 125cc variant, as well as the larger capacity models, there is a very high demand for the higher capacity models, specifically the engines.” They’re being stolen to transplant the motors.

Is it legal to sell a V5 on its own, where no motorcycle even exists?

We found numerous examples of a V5 for sale where the vendor listed them as memorabilia, stating: “Disclaimer: this for memorabilia purposes is a V5 registration document that is presently SORNed, you will receive two letters, one from myself with the V5C-0119 (formally known as the 'green slip' V5C/2) with the frame number written on it, then the second letter will be from the DVLA a week or so down the line with a new full V5 registration document in the buyer’s name.” 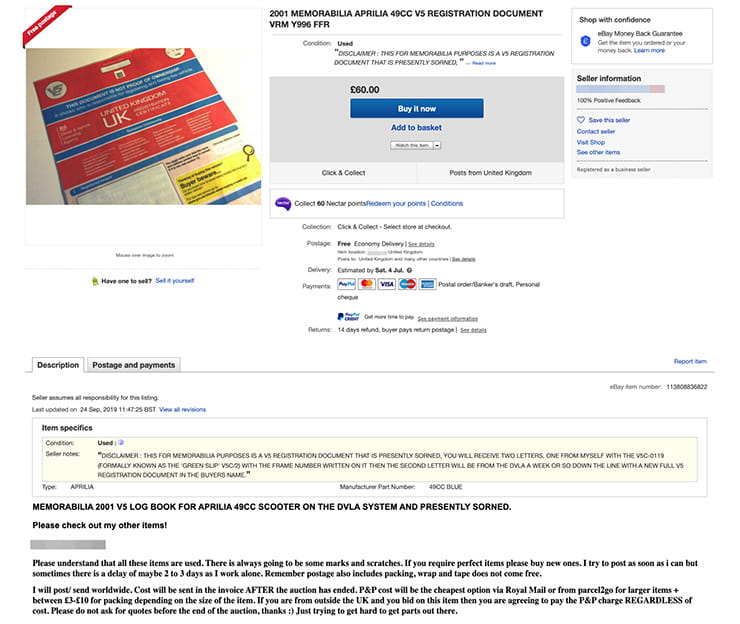 It’s pretty clear from that listing that there isn’t a motorcycle involved in that sale, which is against eBay policies. “We invest heavily in teams dedicated to fraud prevention, customer service and law enforcement liaison,” an eBay spokesperson told us. “We work closely with many regulators, organisations and government bodies – including the DVLA – to protect our users.

“These items are banned from eBay’s platform and have been removed. We take appropriate action against sellers who breach our policies, including account suspension.”

eBay did exactly that and removed more than one listing that we had pointed out to them, so they do react when prompted.

Unfortunately, days later the seller had more of the same listings online.

The DVLA simply states that a V5C should be returned to them when a vehicle is scrapped, but as we’ve already found, because there’s no legal obligation to formally scrap a motorbike, there’s a massive loophole. I remain to be convinced though, as far as motorbikes go, if that’s a loophole that is being massively exploited by organised criminality. 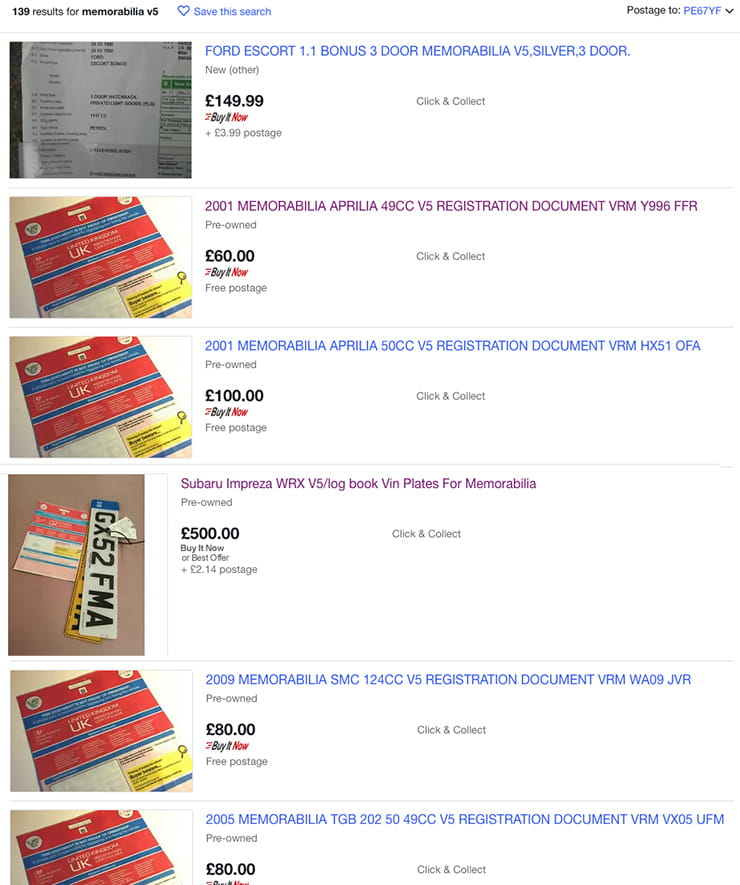 eBay withdrew the listings we showed them, but there are plenty more, including car registration documents, which contradict the government’s legislation. According to the description, the Subaru documents are from a “low mileage Black WRX Wagon which had only done 42,694 miles and only had 2 previous owners.” The seller of the 1990 Ford Escort V5 goes on to say that they’re also offering the “plates/tags from under the bonnet.”

The main issue is the theft of Powered Two Wheelers (PTWs) to enable them to be exported or broken for parts. If they’re being broken for parts, the question must be who’s buying those parts and whether we should legislate who can sell them.

We already legislate who can scrap cars and vans.

Maybe we should get motorcycles added to the End Of life requirements.

One thing is certain though, motorcycle crime is down thanks to action by the police along with groups like Stolen Motorcycle Recovery London and MAG raising awareness. The industry has also responded with the MCIA Secured Scheme, which aims to promote better security on bikes as standard.

“The recent scooter crime wave in London and other cities – and the subsequent use of stolen machines – put PTW theft on the front pages,” A spokesperson for the MCIA said. “But of course, it’s always an issue.

“MCIA supports and participates in the Met Police’s Lock. Chain. Cover initiative to highlight the benefits of using layered, secondary devices. In addition, MCIA recently launched MCIA Secured a programme that identifies the standard security kit fitted to new bikes, so that buyers can make informed choices. Our ambition is that the MCIA Secured star-rating becomes part of a magazine or website’s road test narrative, and as important to buyers as performance or comfort.”

As with any purchase you make, from parts to an entire motorcycle, its best to buy from a reputable source. There’s plenty out there…