With last year’s arrival of Kawasaki’s stunning, supercharged H2R plus Suzuki’s showing of its Recursion concept, the issue of ‘forced induction’ on motorcycle engines, i.e. machines with either superchargers or turbochargers, is now very much back on the agenda for the first time since the mid-‘80s. But what bikes have there been, what were their strengths and weaknesses and what is there to look forward to? We round up the 10 best ‘forced induction’ motorcycles to find out… 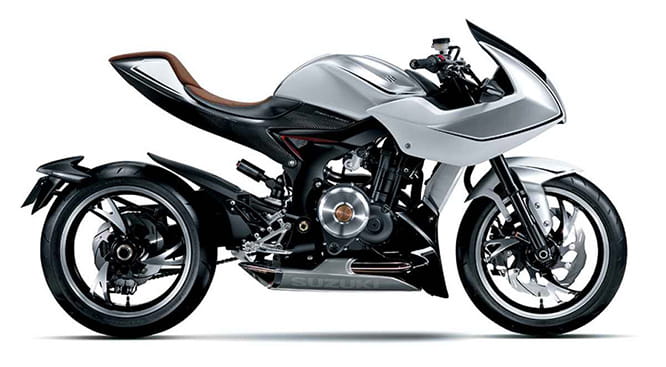 Although still officially only a concept bike, the turbo-charged Recursion is looking more and more likely to enter production. First publicly shown at the 2013 Tokyo Show, it’s an all-new, 588cc, liquid-cooled parallel twin with induction via an intercooled turbocharger. Peak power isn’t the key here – instead it’s torque, with the Recursion claimed to produce peaks of 100bhp at 8000bhp (nothing remarkable there) with 74ft-lbs of torque at 4500rpm (compared to, say, the GSX-R600’s 43.6ft-lbs at 11,140rpm. Why might it become a reality? For one thing, the show bike looks remarkably production-ready. For another, a host or patents and trademarks regarding the bike have already been filed. Here’s hoping…

You just gotta love Bimota. The boutique, Italian exotica brand may still seemingly be lurching from boom to bust despite another changer ownership a couple of years ago, but it can still be relied upon to come up with crowd-stopping bikes. Of course, as ever, whether they actually reach production is still another matter… The latest, the Impeto which was launched alongside the new Tesi 3D Race Cafe at last autumn’s Milan Show, joins the growing fashion for forced induction machines by being a super naked based around a Ducati’s 1198cc V-twin with, pertinently, the option for a supercharger kit, apparently for ‘track use only’, which is claimed to boost power by around 20 per cent. As I write, the bike has yet to be tested or, as far as we know, go into production. 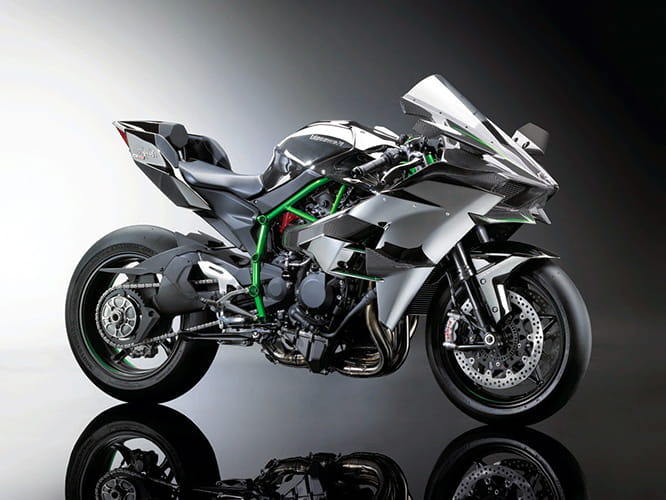 Kawasaki’s astonishing, all-new, supercharged flagship/marquee machine was launched in two forms in 2015 – road-legal, 207bhp, £22K H2 trim and in even more exotic, powerful (310bhp) and limited edition (just 300 will be made for global consumption at £41,000ea) H2R track-only specification. Both are based around an all-new, purpose-built four while the supercharger itself, as a demonstration of Kawasaki Heavy Industries’ breadth of abilities, is also built in-house rather than bought-in. The frame is a tubular steel trellis. The bodywork is angular and menacing (and carbon fibre on the R) and they’re slathered in the latest electronics and high-end components. Both are also sensational, particularly in terms of how they accelerate. 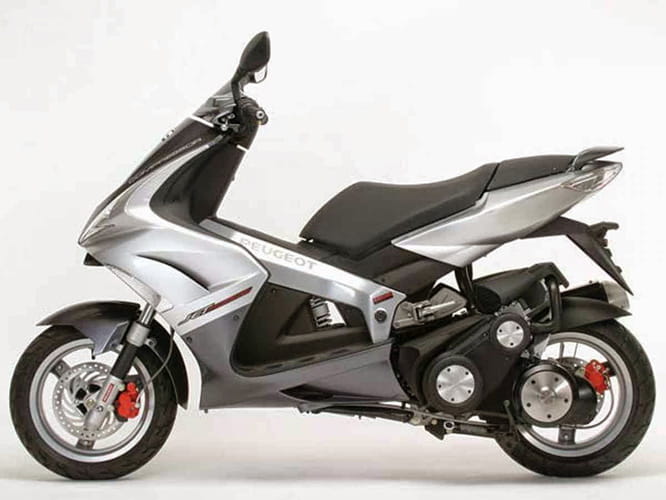 Proof that forced induction isn’t restricted to superbikes or performance machines, the Jet Force was, its French manufacturer claimed, the world’s first supercharged scooter. Essentially it was a conventional 125cc scoot powered by a familiar, liquid-cooled, four-stroke engine, which in standard trim produced the maximum 15bhp permitted for a learner. However, with the supercharger added this was boosted to 19bhp, enough to outpace even the quickest 250cc scooters of the day. On the downside, much of the usual underseat luggage space was sacrificed to a car-sized air intake while the price was larger than many 250s, too with the result being it wasn’t a commercial success. Novel, though. 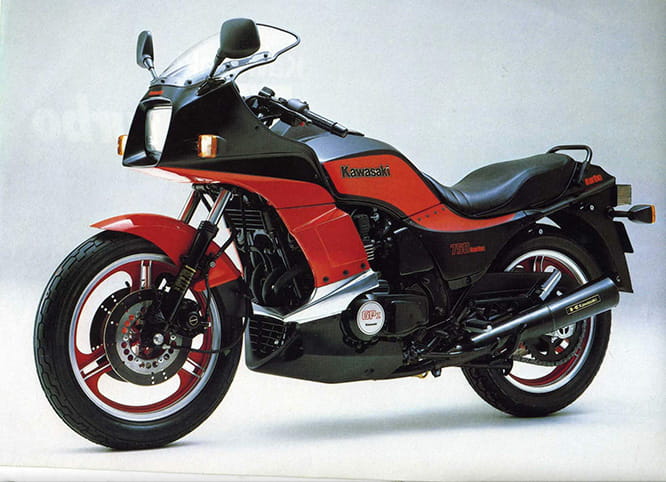 Last of the Japanese to jump on the turbos bandwagon in the early 1980s the GPz750T was also, arguably, the best. It was unveiled in 1984 (incidentally when most of its rivals were beginning to give up on the idea), it boasted a proven, GPz750 chassis along with significantly enhanced performance (which made it a real rival for Kawasaki’s own GPz1100. On the downside, as this suggests, its bigger brother was just as good yet cheaper while most damagingly of all, Kawasaki had also just come out with its completely game-changing GPz900R. Even so, a fair few still survive today, are still reasonable value and have a strong following. 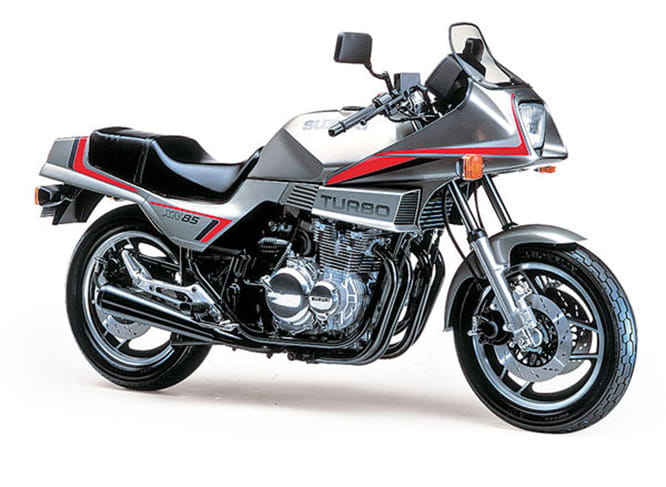 Suzuki’s offering into the short-lived Japanese turbo wars of the early 1980s, was, like its rivals from Yamaha and Kawasaki, hampered both by being based on an aging air-cooled design (in this case a GS transverse four) and also boasting just 673cc, so it’s 85bhp performance (hence the name) was never going to set the world on fire. On the upside, however, the XN’s still considered one of the best-looking of all the ‘Katana-era’ machines and, despite its 16in front wheel, was considered a sweet handler. Rare today, though. 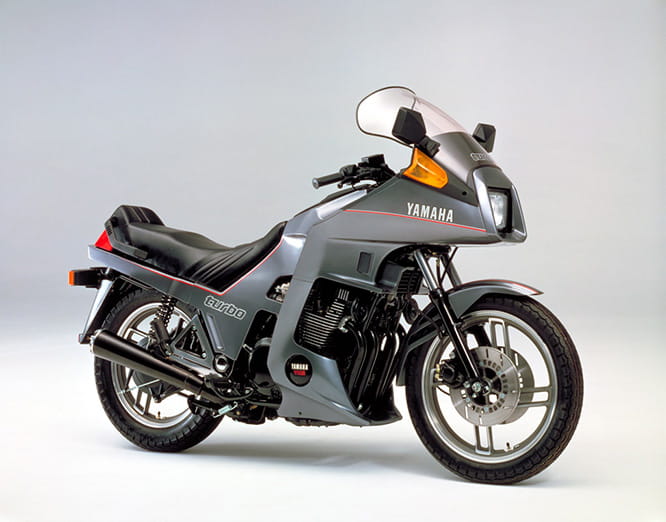 One of the earliest of all ‘80s era turbo bikes was also one of the shortest lived – and that’s a shame, as Yamaha’s XJ650T was also among the most interesting. Launched in 1982 and based on the already aging, air-cooled, transverse four-cylinder XJ650 powertrain, the addition of a turbo boosted performance to a respectable 90bhp. More interesting still was the addition of a futuristic and effective full fairing complimented by a comprehensive, high tech dash. More sports-tourer than sportster (thanks to its slightly wobbly chassis) it’s a rare find in good nick today. 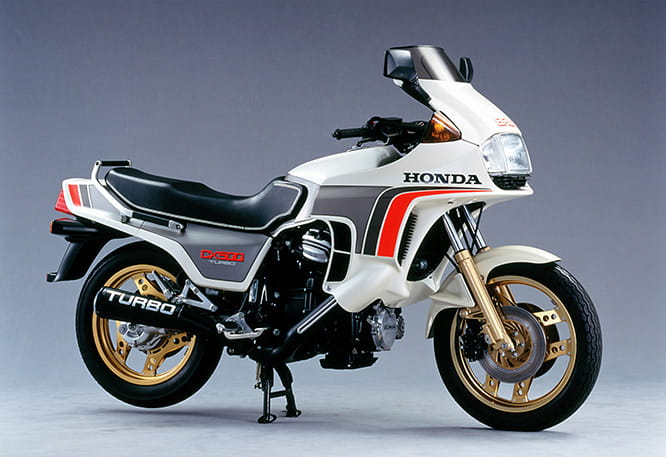 The bike that started it the early ‘80s fashion for turbos is arguably the best – and maddest – of them all. At the time, Honda’s choice of using the CX500 ‘plastic maggot’ commuter was considered to be Honda being typically gauche – an oddball on which is could best showcase its technological prowess – although it later emerged that the pushrod twin had been designed from the outset to be turboed. Honda then added a stylish, effective fairing, high-spec cycle parts and equipment and, famously wrote the word ‘OBRUT’ on its nose. However, with just 82bhp it was competent rather than compelling, expensive and not a success, something not improved when boosted to 673cc and 100bhp for 1983 – increasingly collectable today, however. 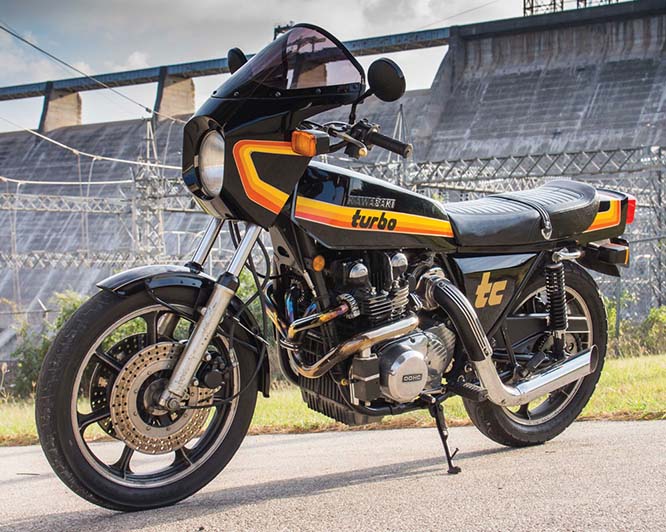 If you thought the CX500/650, XJ650T and their ilk were the first production Japanese turbo machines,  think again: all of them were beaten to the punch by the 1978 Z1R-TC – albeit in the USA only. In truth it wasn’t a factory machine at all, instead being a ‘factory-approved’ conversion built by Kawasaki’s American importer by fitting the then Z1-R superbike with an aftermarket ‘Turbo-Pak’ kit. The result boosted power by 40bhp to a fairly impressive 130bhp although in truth that was far too much for the standard chassis to handle. So much so, in fact, that Kawasaki refused to warranty the conversion. 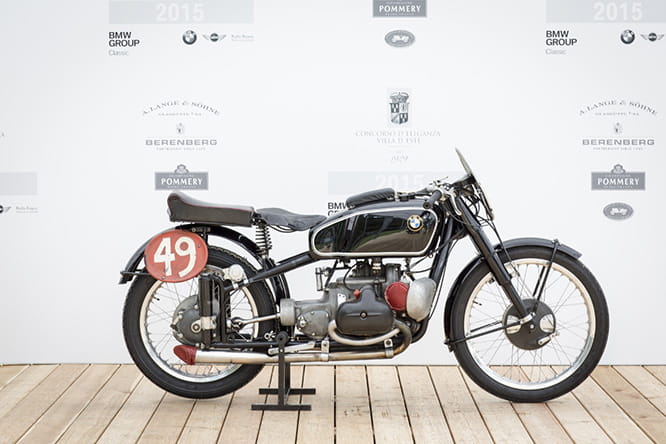 Of all ‘forced induction’ machines, however, the ‘daddy’, surely, is the amazing BMW ‘Kompressor’ which competed with such success during the 1930s. Purpose-built as a racing machine the 492cc DOHC boxer featured a magnesium engine block and aluminium cylinders for lightness and, courtesy of a Zoller supercharger mounted in front of the engine and driven directly off the crank, produced an all-conquering 60bhp – enough, in the 1930s, to not just win the 1939 TT with Georg Meier (the first non-British Senior victory) but also, in streamliner form, claim a motorcycle land speed record. One of the few survivors was sold at auction in 2012 for a then world record for a motorcycle $480,000.