Fifty years of the Honda CB750 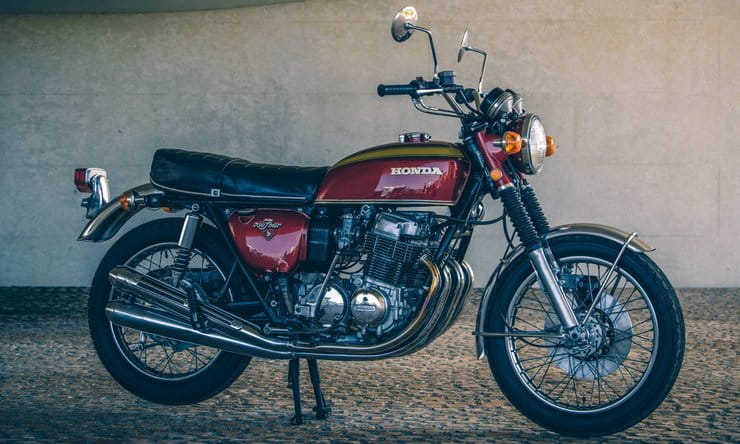 Arguments have raged for years over the first motorcycle to truly deserve the title ‘superbike’. On one side you’ll find an army backing the Brough Superior or some similarly significant pre-war landmark. Others say the aluminium frame and full fairing of the 1985 Suzuki GSX-R750 make it the genesis of the breed. But by far the biggest group will agree that one machine – Honda’s 1969 CB750 – deserves credit, and this year we’re marking its 50th anniversary and with it half a century of superbikes.

Why does the CB750 deserve such plaudits? For one, it’s widely agreed to be the first bike that was christened with the ‘superbike’ title in the press at its launch, but it goes much deeper than that. It was faster than its rivals, it brought four-cylinder engines to the masses for the first time, and it was the first production bike to use disc brakes. Sure, other firms were thinking along the same lines at around the same time, but Honda got there first. 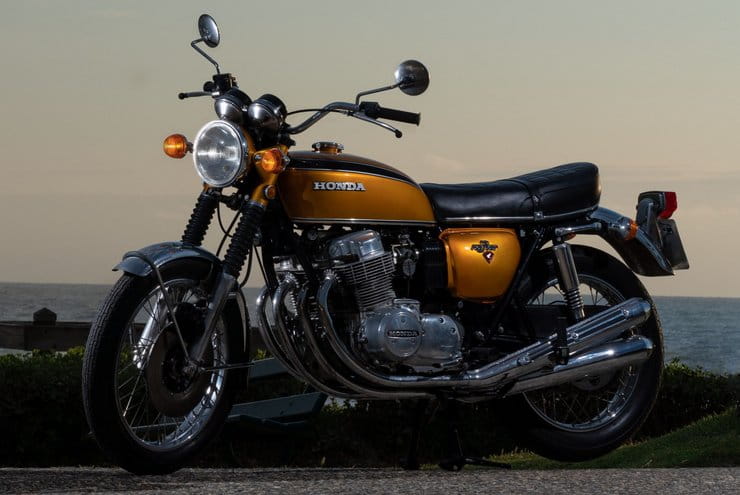 The CB750 was developed with a single-minded purpose; it was intended to consolidate Honda’s foothold in the USA and make inroads into a part of the market that was, at the time, dominated by British brands. Yes, as well as marking the golden anniversary of the superbike, this year could be seen as half a century since the beginning of the end for the British bike industry.

Back in the 60s, the US market was dominant, and Honda had already experience something approaching an overnight success over there. Having imported its first bike to the States in 1959, by the early 60s the firm had turned its Super Cub into a massive success – overturning the traditional idea of motorcycles as transport for grease-stained rebels thanks to its ‘You Meet the Nicest People on a Honda’ ad campaign. The resulting acceptance among housewives and clean-cut students meant money was pouring into the company’s coffers during much of the 60s, but the desire to expand meant Honda needed to create a machine that would appeal to the higher end of the bike market. Suddenly those greasy rebels were in its crosshairs, but having branded itself as the maker of friendly, unintimidating two-wheelers, it faced a challenge to appeal to these more established riders.

While the CB750 would achieve that goal, it wasn’t Honda’s first attempt. Initially, in 1965, the firm launched the CB450. Thanks to a high-revving DOHC parallel twin and its light weight, the CB450 was theoretically a match for the British 650cc twins that dominated the American big-bike market at the time, but buyers weren’t convinced – it seemed too small – so Honda America pleaded with the factory for something beefier. Enter the CB750.

Development started in 1967, 750cc capacity and four-cylinder layout picked on the basis that it was bigger than the typical 650 twins of the era, and also with the knowledge that Triumph was working on a 750cc three-cylinder that would become the Trident (and the badge-engineered BSA Rocket 3) in 1968.

Honda already had experience with four cylinder engines, of course. It had raced them in GPs (along with five and six-cylinder engines), and mass-made a water-cooled, DOHC four-cylinder car engine since 1963, starting at a mere 356cc but ranging to 791cc by the time the CB750’s development began. In comparison, the air-cooled, SOHC, 736cc four in the CB750 was a relatively simple design. Honda’s technological advantage over rest of the industry meant it could build an engine that was far more advanced than the aging British twins while simultaneously dialling back on the most extreme tech to make sure it held on to the reliability that had made the company such an overnight success. 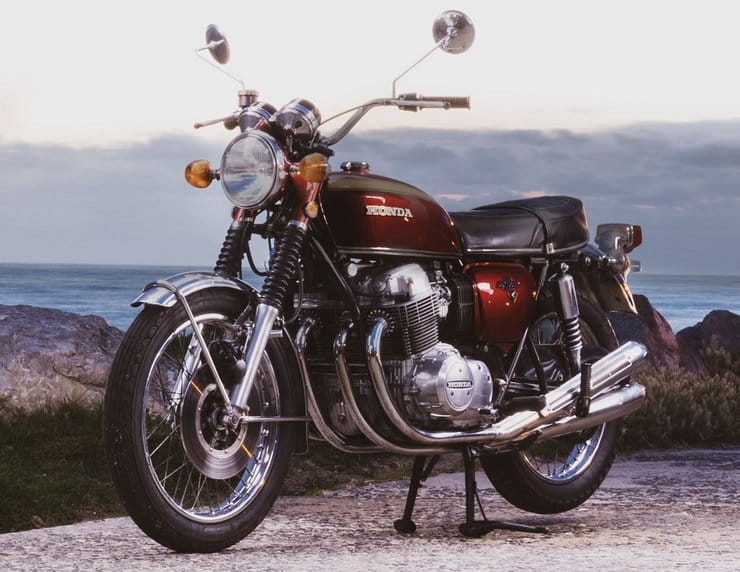 Incredibly, CB750 was developed in little more than a year and ready to make its show debut at the end of 1968.

Those show bikes were still prototypes, though, and the production version eventually went on sale in the States in July 1969, with a price of $1495. Japanese engineering and manufacturing advantages, with relatively cheap labour, meant that even after shipping them halfway around the world they undercut rivals by a vast amount: a typical British sports bike of the era cost more than $2000 at the time in the all-important US market. With 67hp on tap the CB750 was more powerful than the fastest 1300cc Harley-Davidson rival, not to mention the British twins it was targeting and the then-new, 58hp Triumph Trident.

Perhaps unsurprisingly given the unbeatable combination of price, technology and performance, Honda struggled to keep up with demand. With no previous experience in this part of the market to draw upon, the company didn’t know how many of the bikes it would need to make. At first it had modest plans to sell 1500 CB750s a year, but it soon revised that figure to 3000 - every month.

The low projected production meant Honda initially used sand-casting for the crankcases – a labour-intensive system normally reserved for limited-edition or race bikes. Soon Honda had realised it would quickly recoup the cost of tooling up for larger-scale production, but 7000 or so ‘sand-cast’ CB750s were made and are now among the most sought-after early models. 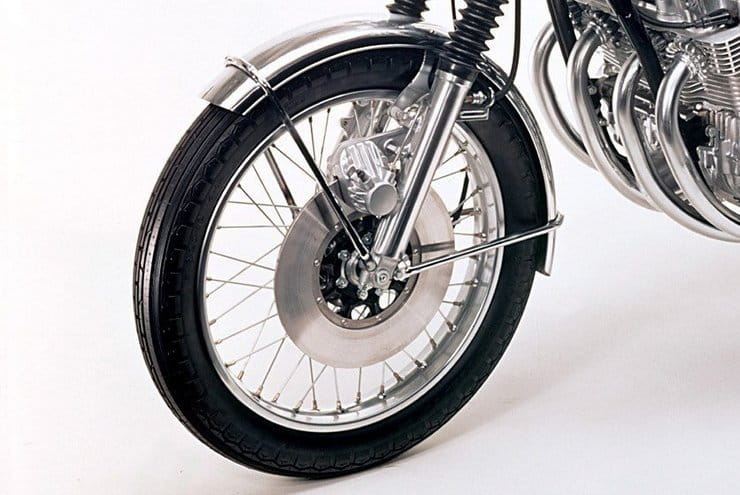 The first production bike with disc brakes –the CB750's most important contribution to motorcycling?

Yoshiro Harada, the engineer trusted with the CB750 project from its inception in 1967, had a list of targets to meet including high-speed stability, minimal vibration, reliability and longevity, but one of the most important was to give the bike a braking system that could cope with repeated stops from the sort of high speeds that virtually no other road bike of the era could hit.

Disc brakes, already used in racing and common on cars including Honda’s own mass-made S800 sports car from 1967, were the obvious answer, but at the time no other manufacturer had offered a mass-made, disc-braked production bike. Harada reportedly offered Soichiro Honda the choice: stick with tried-and-tested drums or rush through the testing needed to develop a disc brake setup. Soichiro, never afraid of the impossible, opted for the latter.

Combine those race-spec brakes with the four-cylinder engine and unprecedented performance and it’s easy to see why the CB750 was an instant hit. Imagine a firm launching a bike with MotoGP technology and performance today, and selling it for half the price of a mainstream sports bike from any of its rivals; that’s effectively what Honda did. 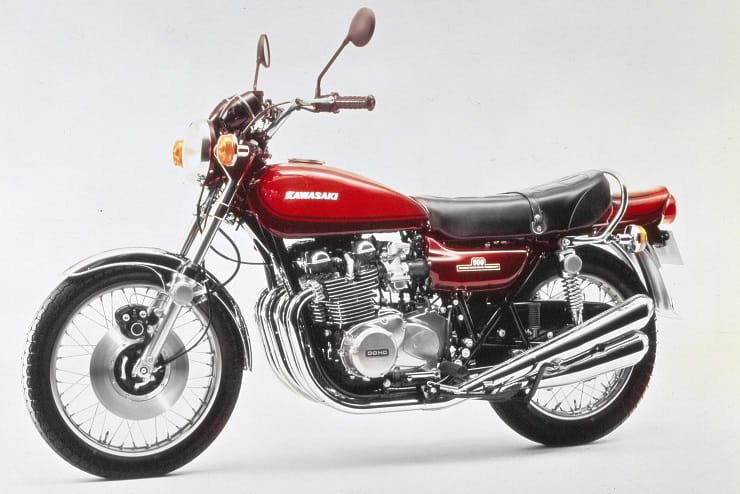 Without the CB750 there would have been no Kawasaki Z1 900

The CB750 inevitably spawned an entire class of imitators, just as the Fireblade did decades later when it repeated the trick of establishing an entirely new class. Not everyone was sold on the same formula immediately, though.

Responses to the 1969 CB750 included Suzuki’s 1971 GT750, a 739cc three-cylinder two-stroke that could match the CB’s 67hp output. Yamaha’s first try was even stranger; the RZ201 was a short-lived project to build a Wankel rotary bike with two 330cc rotors, again making 67hp. It never went past the prototype stage and Yamaha instead reverted to a conventional parallel twin for its 63hp TX750 in 1972. It took until 1978 for Yamaha to go down the four-cylinder route with the XS1100.

Suzuki, which long held out against the idea of four-stroke engines, also tried the rotary route with the 62hp RE5 in 1974, but eventually joined in with the four-cylinder, four-stroke gang in 1976 with the GS750.

But one bike rose head and shoulders above all these efforts, and predated most of them; Kawasaki’s Z1 900 of 1972. Appearing just two years after the CB750 it raised the bar with 903cc and 81hp, taking the superbike crown from Honda and refusing to give it back.

But it wouldn’t have existed without the Honda; Kawasaki originally planned to launch it earlier, as a 750cc four-cylinder, but on seeing the CB750’s performance in 1969 the firm realised it needed to go back to the drawing board and boost the Z1’s displacement to make sure it wasn’t launching an inferior machine. 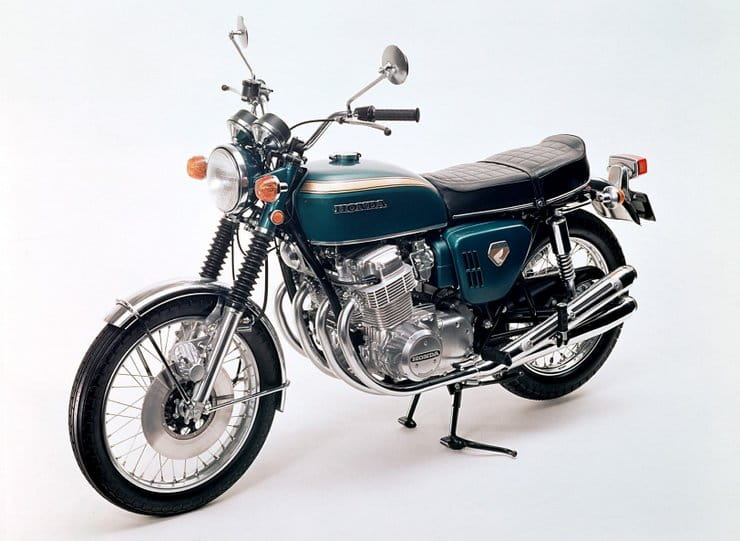 Given the speed with which Honda developed the CB750 and the fact that it lost its edge on the competition just three years after its launch, you might have expected Honda to hit back with an upgraded model soon after the Z1 appeared.

Not so. Honda showed a surprising lack of interest in improving its flagship, sticking to mild year-on-year tweaks rather than big improvements to address the competition’s power advantage. Some suggest that by the early 70s Honda’s interest had moved on – by 1972 the firm’s target was to invade the US car market with the newly-launched Civic – so it took until 1979 for Honda to launch its 2nd-gen, DOHC CB750, simultaneously pushing the boundaries further with the six-cylinder, 1047cc CBX. 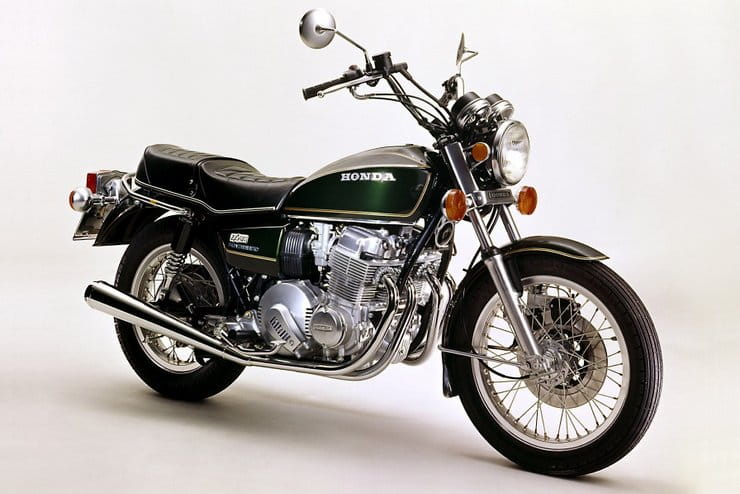 Hondamatic CB750A was an unusual step to take, but Honda believed it was the future

When Honda did invest in the CB750, it wasn’t always in the direction you’d expect. 1976 saw the introduction of the CB750A with Honda’s ‘Hondamatic’ two-speed, semi-automatic transmission. This weird creation still used a foot pedal to change gear, but was mechanically completely different to a conventional bike transmission. It featured a torque-converter, like an automatic car, so there was no clutch lever, and the engine was heavily revised -  lower compression, smaller carbs and softer cams – with significantly less power.

While the CB750 and the rivals it inspired dominated the 1970s motorcycle market, the 1980s saw a shift towards more specialised machines. Faired sports bikes, laid-back cruisers and well-equipped tourers emerged, marginalising the ‘standard’ or ‘UJM’ style that was epitomised by the earlier generation of flagships. 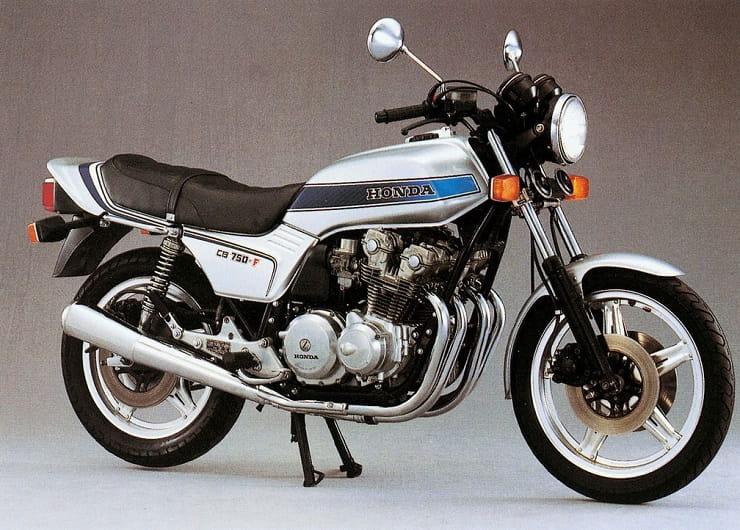 Even so, the CB750 remained in Honda’s line-up. The 1979-on DOHC version, inspired by the cylinder head developed for the endurance racing RCB1000, saw power rise to 72hp, but by then it was no longer Honda’s flagship. The later CB900F of 1981 and the 1983 CB1100F continued the tradition of the original, while the 1981-83 CB1100R showed the sportier side of the design, adding a full fairing and made in small numbers to achieve racing homologation. By 1984 Honda’s focus had shifted to V4 engines, though, and the CB750 soldiered on as the CB750SC until it was axed at the end of 1986. Its derivative, the CBX750, later led to the revival of the CB750 name for the CB750 F2 in 1992, remaining in production as a slightly retro standard bike well into the new millennium. 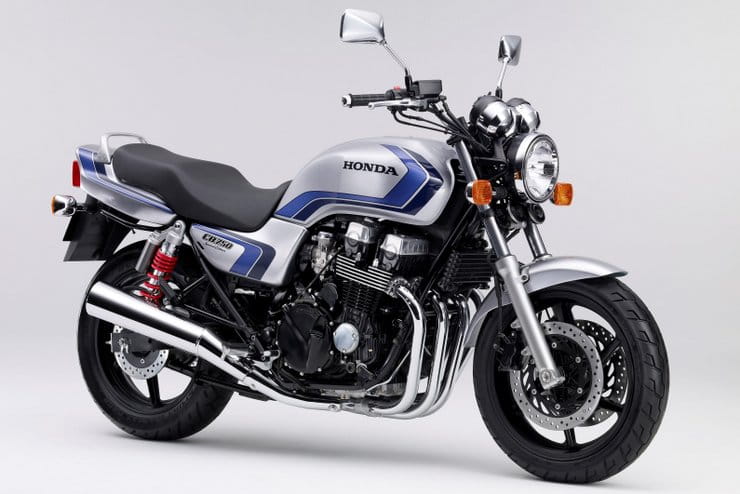 While the relentless march of progress means there’s no direct descendent of the original CB750 in Honda’s modern line up, the firm’s CB1100 – launched back in 2010 after appearing as a concept in 2007 – was a clear homage to the original superbike. It was the result of a massive engineering push to bring an air-cooled, four-cylinder engine back into the Honda fold despite tough modern emissions regulations that worked against such a format. Now there’s evidence to suggest that another new air-cooled four is on the way from Honda, and what better way to mark the half-century of the bike that first brought the layout to the masses in the first place?