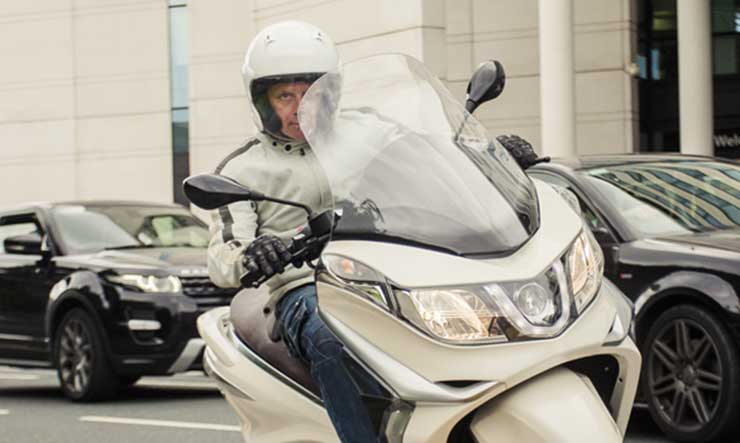 Scooters, or mopeds as they are often referred to, make life seem so much more simple, with their easy 'twist and go' style, low running costs and nippy performance. They offer a lighter, comfier and easier alternative to motorcycle commuting and cost a fraction of the price of a car. And compared to the daily grind of cramming yourself onto unreliable, crowded public transport, they make city commuting feel free and easy.

A scooter is the perfect alternative for people who are put off by the idea of getting a traditional motorbike. Instead of wrapping yourself up in specialist leathers and straddling the engine of an untamed beast, you can simply step through and sit down, riding in a far more civilised position that even allows for skirts. And what little kit you do need, your helmet, stores conveniently beneath the seat so you don't have to carry it around like a courier all day.

The perfect commuter bike, scooters are so much easier to ride, with a low centre of gravity giving you greater balance, and small wheels making manoeuvring much more manageable. They're also far lighter than your average bike and easier to move around with the engine off when you're parking or pushing them into the garage. And because most scooters are automatic, there are no gears or clutch control to master. You literally turn the key, twist the throttle, and you're away.

You'll start saving from the minute you buy a scooter too, with prices ranging from under £1000 for a basic 50cc to around £2,500 for the bigger models with higher specs. Compare the price of a new motorbike, or a reasonable second hand car, and you'll soon see what great value a scooter style commuting bike can be.

Scooters also cost a great deal less to run, with 50cc models giving up to 90mpg and even larger models delivering fuel economy that leaves most cars back at the filling station. Plus you'll pay a lot less for those miles, with scooter commuting exempt from various charges around the UK, including the London Congestion Charge - soon to spread out to other cities such as Manchester - and tolls such as the Mersey Tunnels and the Severn Bridge. They're also much cheaper to maintain, with their simple design leaving little to go wrong, and because they cost less and have less temptation to let rip, you'll find your scooter insurance quote may be more affordable too.

Kinder to the environment

Add in the environmental benefits of these commuting bikes, burning less fuel in a small but efficient engine, with automatic gears keeping it at its most effective, and you've got a package that's difficult to argue with.

Sure, with a top speed of around 45mph for 50cc models, you're not exactly going to burn rubber, but then in most traffic situations you'll find you're making more progress than those 3 litre company BMWs. And there's nothing more satisfying than leaving your boss stuck in a jam as you weave your way effortlessly through the traffic and into work.

More Information on Riding a Moped & Scooter from Bennetts