Bikers often talk about a ‘range’ – the distance a machine’s capable of on a full tank of fuel – and it’s a useful subject. But it’s also a contentious and misunderstood one.

After all, the further you can ride without having to stop to refuel the better, right? No necessarily. While, surely, the biggest factor in its calculation is the capacity of the machine’s fuel tank? Not always.

Two examples. The bigger the full tank, the heavier the bike when fully-fuelled and weight is one of the biggest enemies of certain types of bike, particularly smaller sports bikes whose handling and acceleration will be adversely affected or pure off-roaders whose manageability is crucial. That’s why a KTM’s scalpel-like RC390 has only a 10-litre tank while trailies such as Honda’s CRF250L has even less at 7.7-litres. So, if you’re after a sports bike or dirt machine, range, if the cost of it is extra weight, may not be so important.

Second, although tank capacity is a major factor in extending range, it’s not the only one. Fuel consumption is a big factor, too, and is generally lower the smaller the engine’s capacity, number of cylinders and performance. That’s why low performance, single cylinder commuters such as Honda’s CB125F or Yamaha’s YS125, which claim mpg figures of 150mpg+ can achieve ranges approaching 300miles from 13 or 14 litre fuel tanks. Although given the type of city riding they’re designed for and how unrealistic it would be to ride one, at a steady 50mph, for hours on end, that’s largely academic.

You also have to remember that a range of much over 150miles, or around two hours in the saddle, may be of limited appeal. Many riders like a ‘comfort’ break by then while few, other than long distance tourers, actually want to cover upwards of 400 miles a day with as few interruptions as possible. That’s why most of the bikes that offer long ranges are just that – long distance tourers, and particularly ‘global traveller’ type adventure bikes such as BMW’s legendary R1250GS Adventure. But they’re not the only ones.

Here’s our pick of the current ‘10 bikes with the longest ranges’, in ascending order and as calculated from their mpg figures and fuel capacities, and you might find a few surprises… 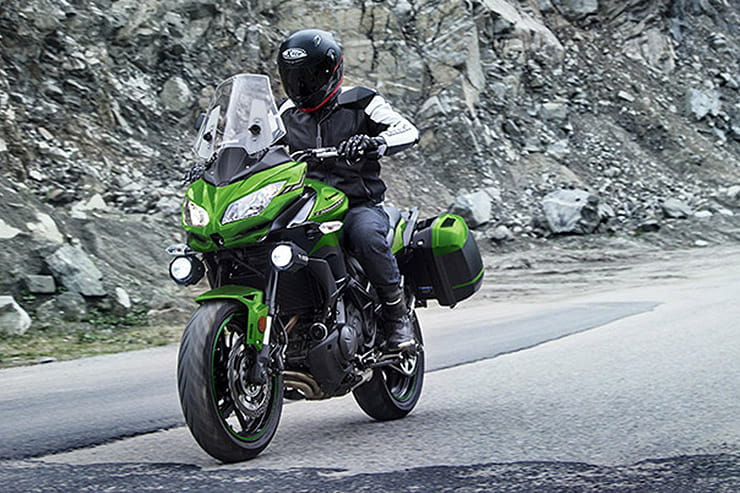 Proof that you want to cover 250+ miles in one hit you don’t need a monster adventure bike or tourer. Kawasaki’s parallel twin powered, mid-range Versys has long been on of the best – and best value – all-rounders you could buy, ever since the original was first launched as an adventure-styled spin-off of the ER6 duo in 2006. This third generation version came in 2015 and, not only gained decent looks, now had an adjustable screen, remote preload adjuster, decent equipment and useful, engaging performance from the 68bhp lump, was also as good value as ever and came in a variety of variations including a Grand Tourer with top box, panniers and 12v outlet. One by-product of all that was a decent range, too. By easily returning in excess of 56mpg, it’s healthy 21-litre tank could return over 250 miles if gently ridden. Not bad for a 650cc middleweight. Truly a bike for all reasons. 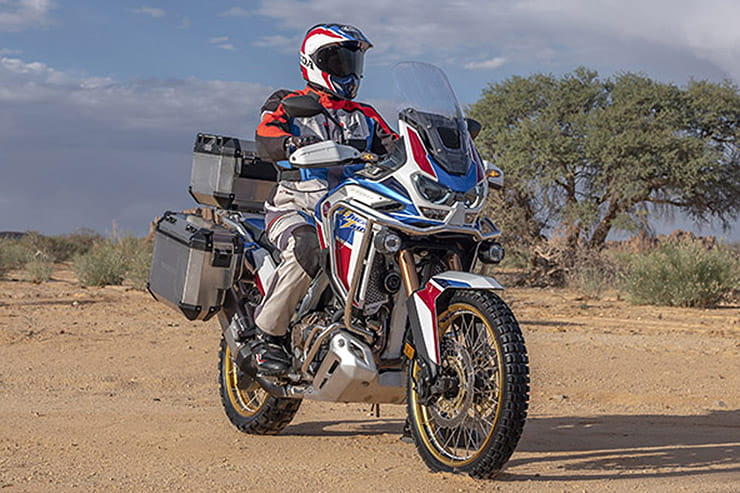 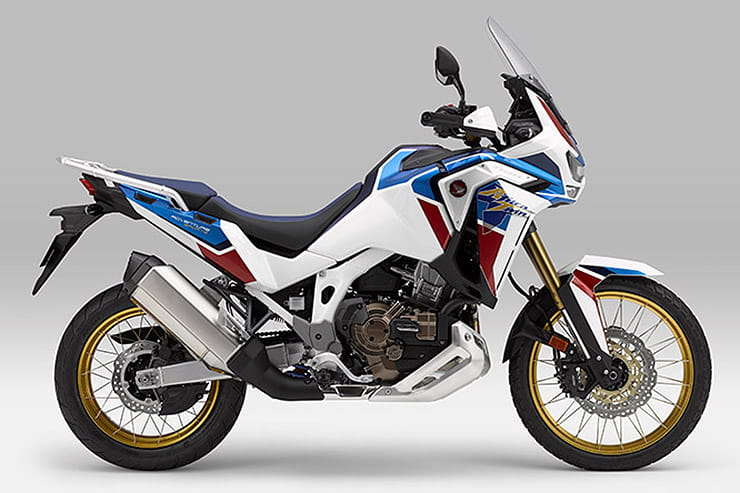 Although Honda’s revival of its much-loved Africa Twin adventure bike from the late 1980s and 1990s was long overdue it’s fair to say that, when the all-new version was first launched in 2016, although its genuine off-road ability, class, shaft drive and DCT semi-automatic option were welcomed, it’s also fair to say that the 94bhp from its 998cc parallel twin, basic clocks and lack of GS-beating touring endurance from the 18litre tank etc. slightly underwhelmed. Things improved with the big-tanked ‘Adventure Sports’ version, complete with better suspension in 2018, while for 2020 both have stepped up significantly again. The new 1100 Adventure Sports is now the long-distance tourer (the stock 1100 is the more off-road version). Both now have 100bhp and much improved clocks and electronics while the AS gets lower suspension and an even bigger 24.8litre tank to compensate for a slightly reduced claimed mpg of 57.6. On the launch, following some fairly hard riding on mountain roads, M-way cruising and more we managed an average of 46.2mpg which crunches through to a range of 275 miles. Ridden more gently 300+ should be possible. 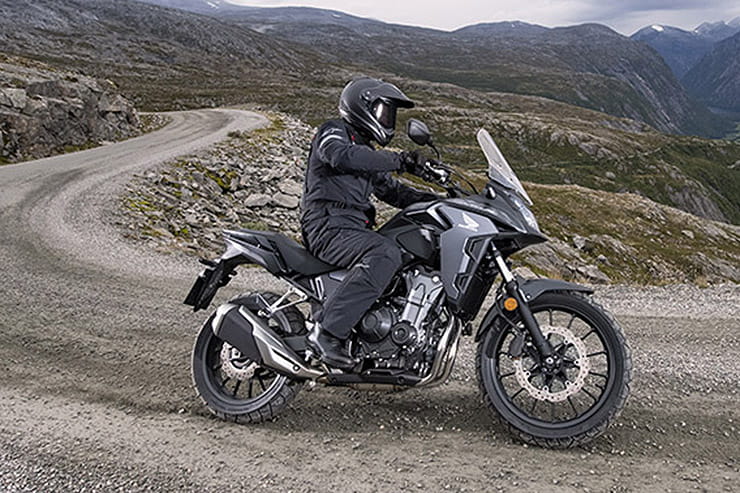 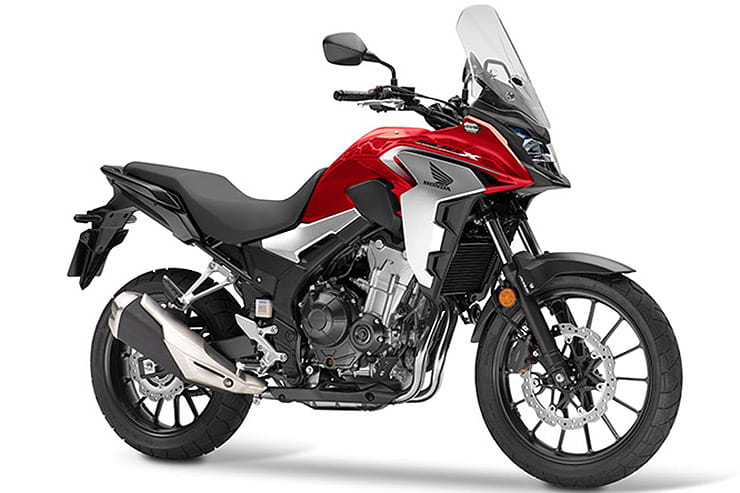 Here’s another range-buster from ‘left field’ that you might not have expected, but it’s again great to have bikes in here that aren’t all leviathan monster adventure bikes. Honda’s 471cc parallel twin CB500 family, comprising, initially, CB500F roadster, CBR500R sports and this CB500X adventure-styled version was first launched in 2013 as a purpose-designed, budget-priced (partly through being built in Thailand) A2 licence friendly machine thanks to its 47bhp. All were affordable, easy to ride, fun, versatile and, thanks to the 471cc twin, more substantial than most rivals, too. All have been updated numerous times since, most recently in 2019, and the CB500X remains arguably the most versatile, comfortable over distance and suited to taller riders. Now with longer suspension and a 19-in front wheel it feels more substantial, roomy and comfortable over distance, there’s new reversed LCD clocks and the 17.7litre tank, although among the smaller here, is slightly larger than its two siblings and enough, combined with the soft engine’s ability to give up to a claimed 78.5mpg, to return 277 miles to a tankful, which is class-leading for a novice-friendly, A2-compliant machine. 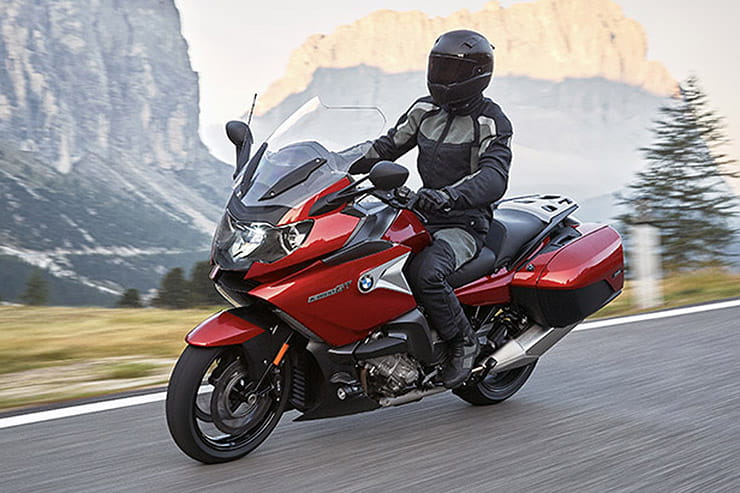 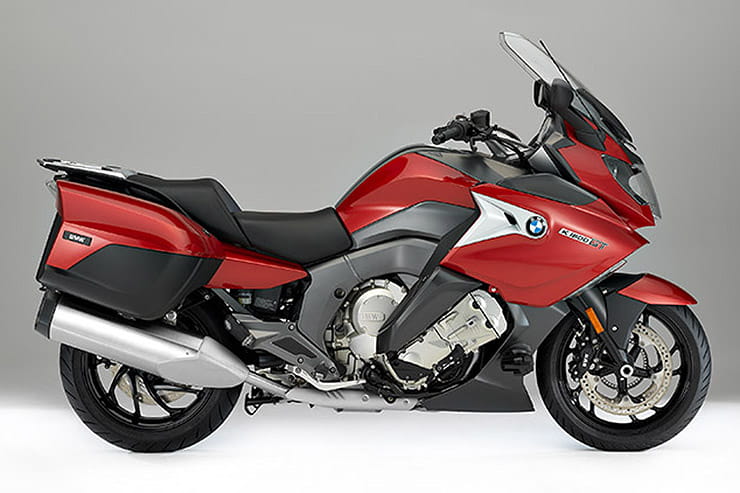 BMW’s ‘wunderkind’ six-cylinder super-tourer, the K1600, had to be in here somewhere, being designed, like no other, to consume vast distances at both speed and sublime comfort. But it’s slightly lowly ranking – just fourth out of the 10 bikes here – is also testament to the fact that big fuel tanks do not always massive distances make. The K16’s 26.5-litre fuel cell is, in fact, the largest here outside of the colossal 30-litre items of the top three adventure bikes, yet this is counter-acted by the six-cylinder, 1649cc engine’s comparative thirst. Still, the K16, and especially its bigger brother, the full-dress (but heavier and thirstier still) K1600GTL, was never conceived as a bike for skinflints and what you do get is lavish luxury and comfort, surprisingly good handling, an options list including satnav, heated grips and seat, ESA etc., as long as you can afford and, best of all, that sublimely smooth, turbine slick and blisteringly quick 160bhp motor. Munching motorway miles has never been so effortless. 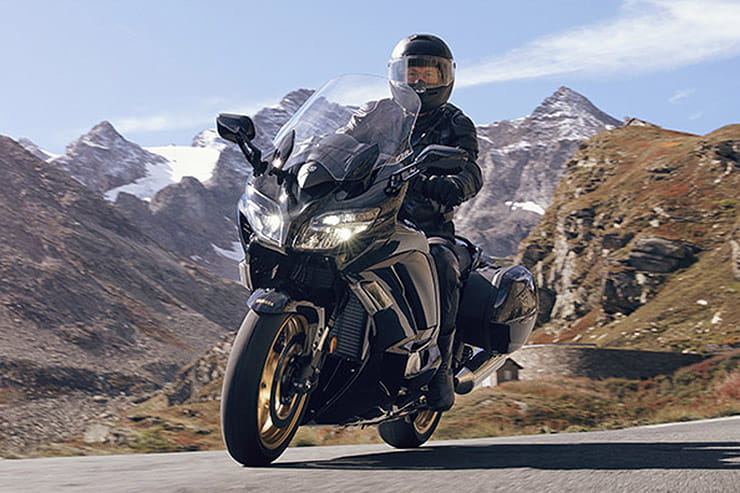 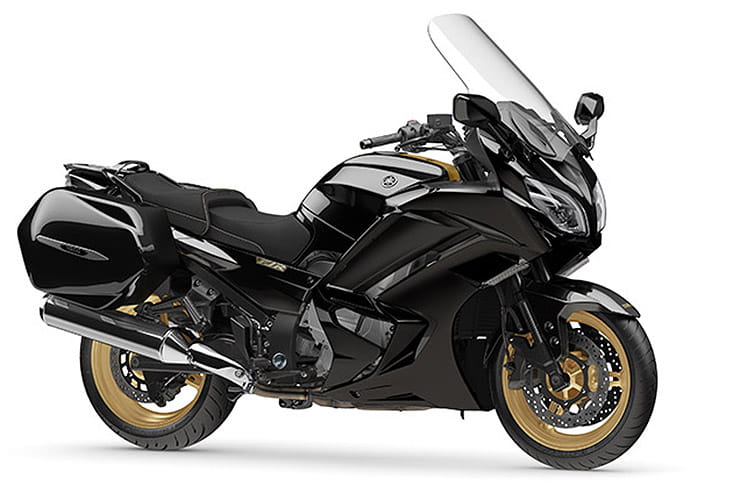 There had to be a full-blown, multi-cylinder, heavyweight Japanese touring bike in here somewhere, surely, although in truth, with the demise of bikes like Kawasaki’s GTR1400 and Honda’s ST1300, Yamaha’s aging leviathan is pretty much the only survivor. Now, in 2020’s ‘Ultimate Edition’ form, so is shortly expected to go the same way, the big FJR, although dating all the way back to 2001, has been updated massively over the years to include, depending on spec, semi-automatic gearbox, electronic suspension and LED lights to go with its already brilliantly grunty and potent shaft drive four, OK handling, good comfort and plentiful luggage options. As such, it remains a benchmark of the breed and the go-to bike for the emergency services. Range-wise it’s pretty good, too. A 25-litre fuel tank combines with our tested average of around 51mpg to deliver a healthy 300 miles with more available with more gentle riding. It’s not the best though… 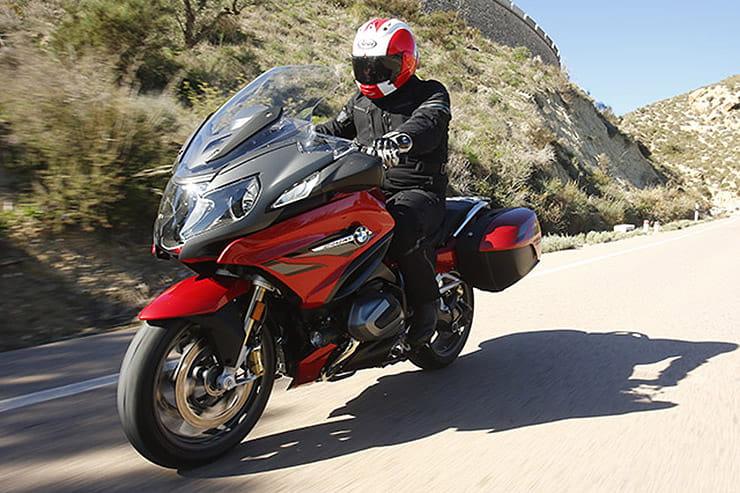 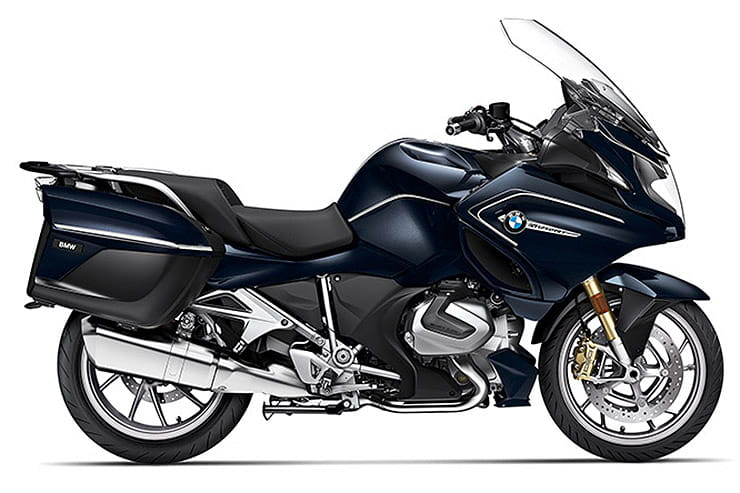 You’d be forgiven for expecting BMW’s ‘king of tourers’ to be up near the top of this pile, especially as the updated-for-2019 ‘ShiftCam’, 1250 version boasts both a big, 25-litre fuel tank and its legendary, twin-cylinder, shaft-drive boxer power plant is pretty frugal, too, returning around 59mpg. But those two figures aren’t quite enough to better the humungous fuel capacities of some of the latest adventure bikes. No matter, the sumptuous and luxurious but also impressively lithe and fine-handling RT remains the benchmark tourer (by some distance), like most other BMs has as many luxuries and creature comforts your budget can extend to, its weather protection and luggage options are the best in the business and, after an early recall in 2014, its flexible, friendly boxer twin powertrain has proven perfect for touring, too. 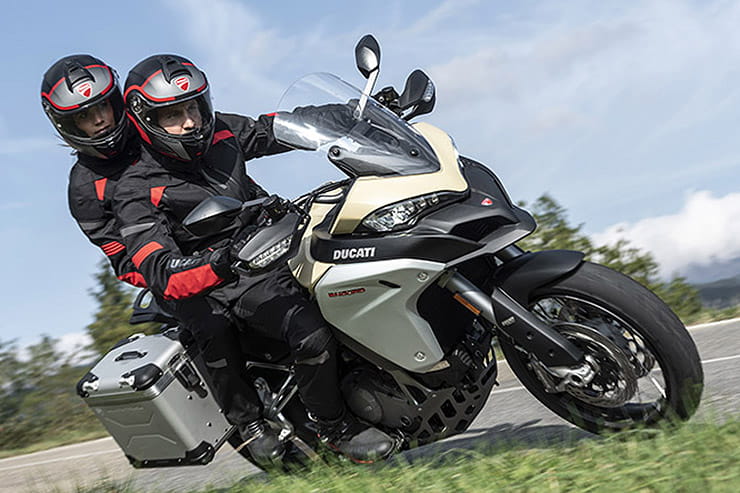 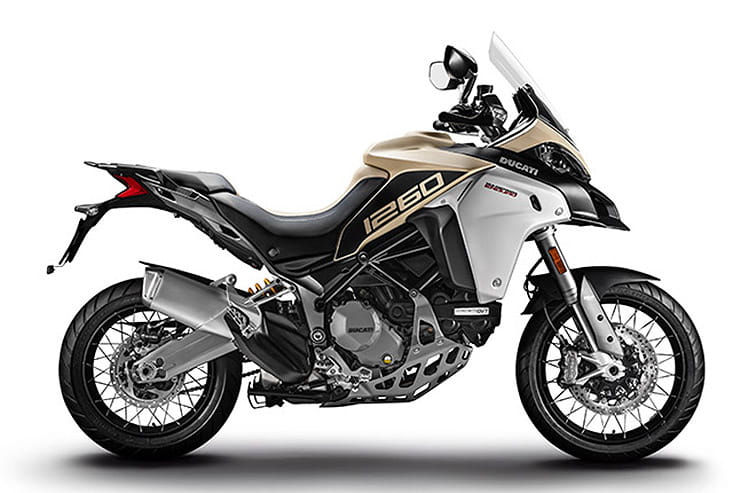 You wouldn’t necessarily expect Ducati’s hi-tech, hi-performance ‘adventure sport’ to feature on this list, what with it having both 160bhp and a fairly normal 20-litre fuel tank. But 2019’s arrival of this ‘Enduro’ version changed all that. Conceived to have more off-road and long distance touring ability and so be more direct competition for BMW’s best-selling GS, it came with a more rugged chassis including double-sided swing-arm and longer travel suspension, revised electronics, off-road wire wheels and, crucially for our purposes, a huge 30-litre fuel tank. That, combined with its claimed 51mpg translates into a theoretical range of 339 miles although it’s worth saying that during our test, when, admittedly, it was ridden pretty hard, that was more like 46mpg, giving just over 300 miles. 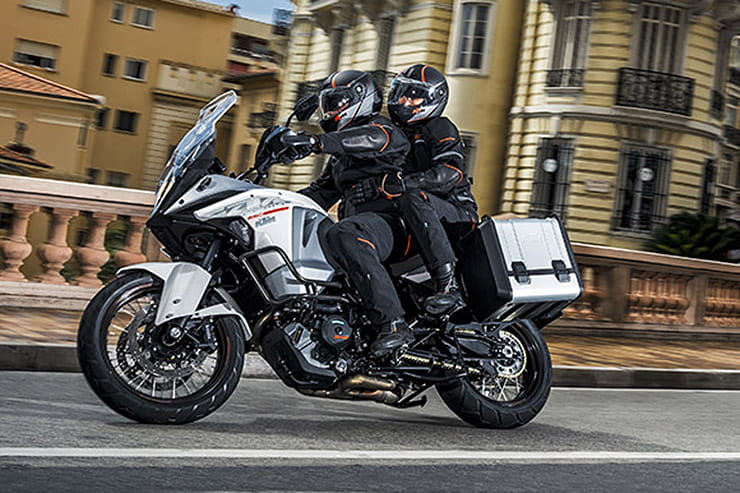 Sadly this is the one bike on our list that you can no longer buy new – although it’s so recent and so significant we think it’s still worth a mention.

First introduced as the flagship of KTM’s reinvigorated adventure bike range in 2015, the Super Adventure was the Austrian firm’s rival to BMW’s GSA and, as such, came complete with a massive 30 litre tank, tons of touring bells, whistles and creature comforts and, being a KTM, the little matter of hard core off-road ability combined with a fire-breathing 160bhp. Thirstier than some, thanks to the tank’s sheer size that also added up to a potential range of 340miles. Sadly, although brilliant, the SA was also eye-wateringly expensive – over £2K more than a stock GSA. In 2017 it was rebadged as the Super Adventure ‘T’, to exist alongside the smaller-tanked Super Adventure S (sport) and Super Adventure R (more off-road) then, due to poor sales, disappeared completely in 2019. Shame. Makes a great used buy, though. We’ve seen low mileage examples out there for as little as £8500. 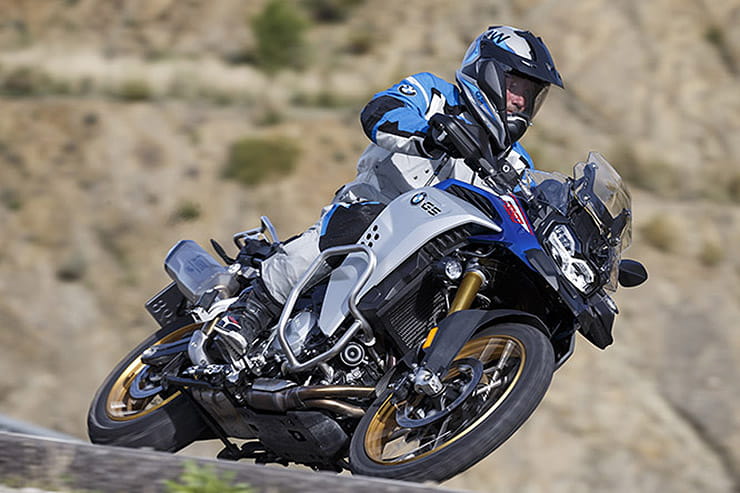 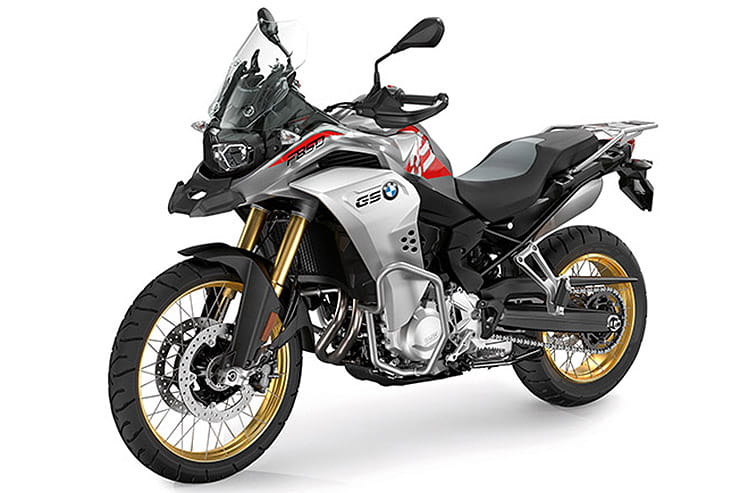 Yes, yet ANOTHER BMW, but considering the German firm is the pretty much-undisputed kings of touring and adventure bikes, that shouldn’t be a surprise. The bike itself, however, is. BMW’s middleweight, parallel twin version of its legendary GS adventure bike, as based on its roadster F800 series, dates all the way back to 2008, morphed into the semi-serious, bigger tanked F800GS Adventure in 2013 then received its biggest update yet, complete with TFT screen, new frame, improved, more economical powertrain and more as the F850GS in 2018. This Adventure version followed in 2019 and is a brilliant, if underrated, all-rounder. After all, with 94bhp, lots of range and goodies, comfort for two, off-road ability and easy, manageable handling, who needs more? And, with around 60mpg and a 23-litre tank, it’s good for getting on for 350 miles, too. But of course, as with all things, and especially OTT adventure bikes, it’s never been about ‘needing’ more – it’s about ‘wanting’ it, which is where our ultimate comes in… 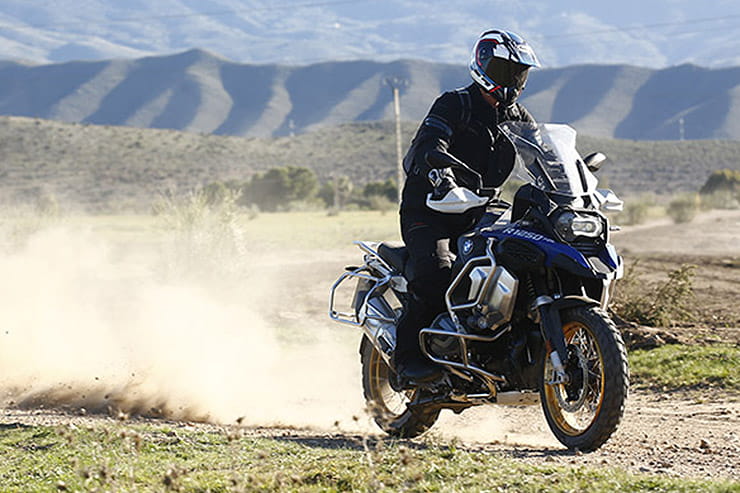 No, no real surprise we’re sure: the original, long distance king, the BMW GS Adventure, as first introduced in 2002 as a big-tanked, more hard-core and off-road-able version of the stock GS, is still the bike to beat when it comes to range. Numerous generations on, the latest version, introduced in 2019, now boasts the latest 1250cc, ‘ShiftCam’ version of its shaft drive boxer twin producing a healthy 134bhp and now comes with BM’s latest electronics and TFT screen as standard. Go mad with the options list, though, and you can get electronic suspension, heated grips, quality luggage in fact everything you need on top of impressive handling, comfort and even a smidge of off-road ability, to take you around the world. Which is what it was always designed for in the first place. And with it returning, on average, around 59mpg and still with a humungous 30-litre fuel tank, you can do it in chunks of almost 400 miles at a time. No wonder it remains a best seller.