How it works: The crankshaft 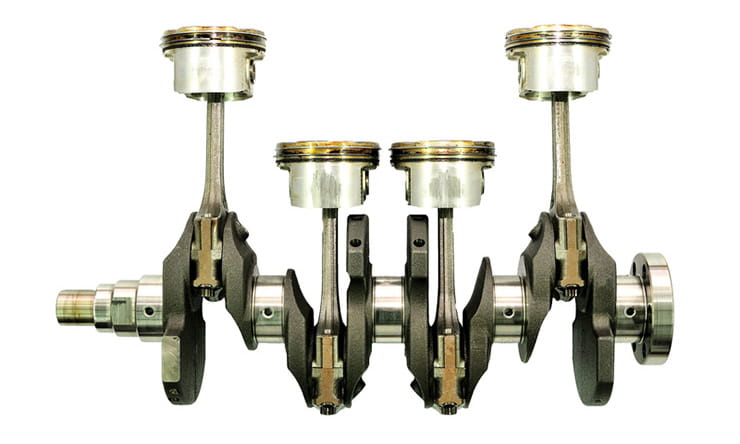 ABOVE: This is your standard four-cylinder crank, with the two outside pistons going up and down together, and the central pair balancing them out

Fundamentally, the crankshaft performs a simple task: translate the linear motion of the pistons into rotation. It’s doing the same job as the crank arm of a bicycle, which turns the more-or-less up and down motion of your legs into rotation.

Although the principal is simple, there are complications aplenty when it comes to high performance motorcycle engines. But before we get into them, we need a few definitions. The crankshaft (or crank) is connected to the pistons by connecting rods (conrods), which have a bearing at each end. The end connected to the crank is bigger, because the bearing it holds has to fit around the crank, which has to be chunky to resist a multitude of forces. So that’s called the big end. The bits of the crank which hold bearings are called journals - and there are two types. The main journals are where the crank is held in place, so these are along the crank’s centreline. The rod journals are, you guessed it, the bits the conrods attach to (these are also known as crank pins). Then there are the webs. These are the lumpy bits which look relatively unmachined compared to the rest of the crankshaft. Their job is to try and balance out the forces created by the pistons flying up and down and the crank itself rotating. 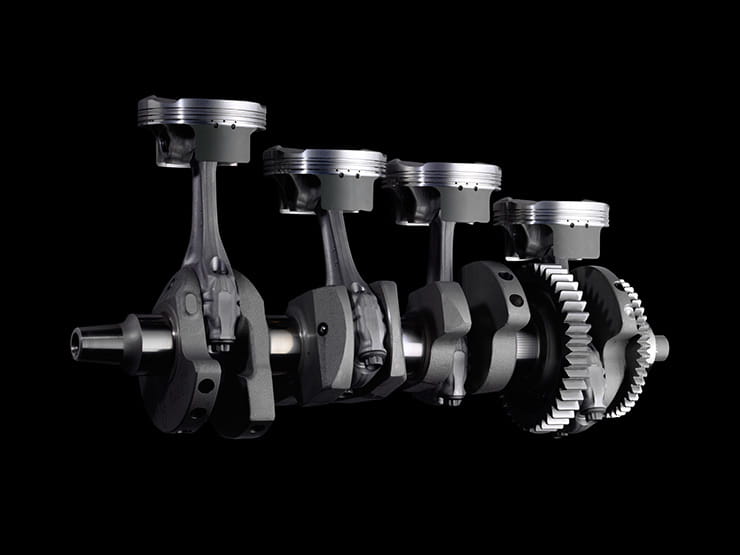 ABOVE: This is a crossplane crank from an R1, and you can see how the pistons aren’t paired – the crank pin for each conrod is offset from previous one.

The forces the crank has to withstand are enormous. As you’d expect, one major force is created by combustion chamber pressure, which slams the piston and conrod down, turning the crank against the resistance of a sticky tyre - the twisting and bending forces associated with that are huge.

Then there are the forces created by piston acceleration. As the piston nears the top of its stroke, for example, the crank is forcing it to decelerate – if it wasn’t attached to the crank, it would fly upwards, smashing into the valves. Though modern pistons (and the associated gubbins of wrist pin, small end bearing etc) are light, the speeds they reach are so high that this deceleration, and the associated forces on the crank, are large.

Besides being strong enough translate explosive linear forces into rotation, a crank also determines when the pistons of a multi-cylinder engine go up and down, which in turn determines the level of vibration, the type of noise it makes and how the bike grips. Take an old Brit twin like a 1960s Triumph Bonneville, for example. These have a crank which lines the two big ends up exactly, so both pistons go up and down in unison – it’s like a single cylinder with two pistons, though they fire on alternate rotations so it’s slightly smoother. Result? Plenty of vibes and that glorious crobba-crobba noise.

By contrast, most inline four-cylinder engines have a crank that sends the centre two pistons up and down together, and the outside two up and down together at opposite times to the central pair. This means the main (primary) forces of the pistons going up and down are balanced, and by firing the cylinders at even intervals there’s a smooth flow of power (which also means the webs can be lighter because they don’t have to keep the crank spinning while it waits ages for the next power pulse). 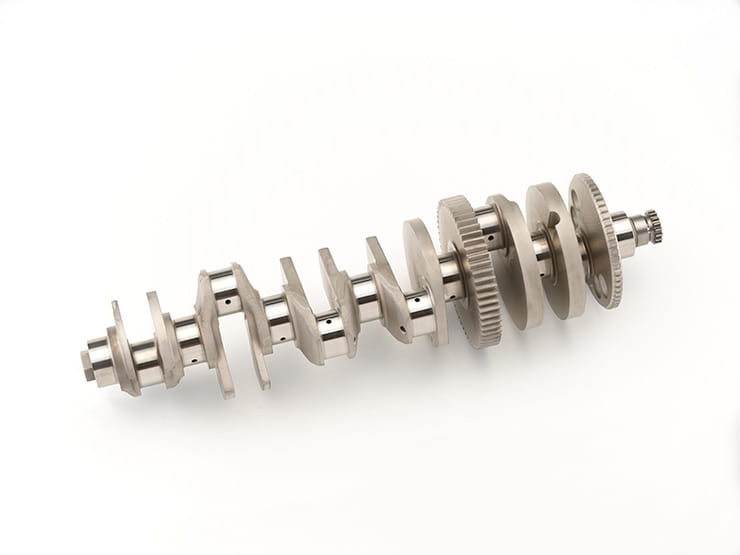 ABOVE: If this looks longer than the other cranks, it is – it’s from a BMW K1600 six-cylinder engine

There are downsides to this layout though. The crankshaft has to be long, which can make the bike feel fat compared to a twin, and because some of the smaller forces are not balanced, you can get plenty of buzzing vibrations if designers are not clever with engine mounts.

Of course there are plenty of other crank designs - some parallel twins (eg the new BMW F850GS), have cranks with offset crank pins so they mimic the feel and sound of a V-twin. And Yamaha introduced the crossplane crank to four cylinder motors – this uses the same offset crankpins as those twins, which evens out the pulses of what Yamaha calls the inertial torque (which is generated by the crank spinning). The end result is a cool droning engine note and, supposedly, better grip under acceleration.

Then there’s Ducati’s new V4, which sounds and feels ridiculously similar to one of their twins because its crank makes the four pistons move in pairs. The two crankpins (each has two conrods attached in a V4) are offset by 70-degrees so that one pair of cylinders can fire close together, then there’s a pause, then the other pair fire close together. It results in a completely different sound and feel to Honda’s silky smooth V4s, in which the crank pins are separated by 180-degrees.