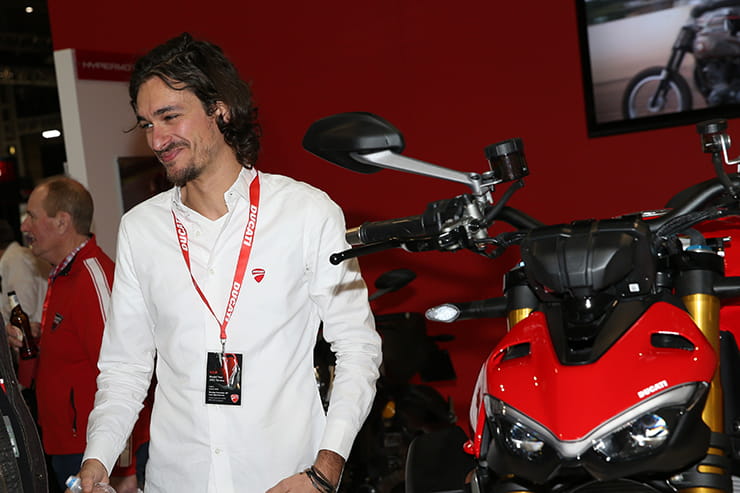 Ducati has six motorcycle designers. Jeremy Faraud, a young Frenchman, in his first job since leaving University, got to lead theV4 Streetfighter project

Jeremy Faraud is clearly a man who enjoys his job. He is one of a six-strong motorcycle design team at Ducati in Bologna and, after the latest round of Ducati’s eclectic-but-charming way of running its motorcycles design program, it was his idea for the new V4 Streetfighter that got the nod.

“The way it works,” he tells BikeSocial, “Is that we all put our ideas forward and then we and others in the company vote for the ones we like best. The initial six designs are cut down to four and then two and then one and the winning designer gets to lead the project. Typically, around one-in-five of a designer’s projects will make it to production.

“Ducati’s brief for the Streetfighter was complex. It had to ride like a superbike in the mountains, be comfy on the run to work, capable of a little light touring too and be fast, of course. I took these conflicting ideas and used one of my favourite ‘conflicted’ film characters - the Joker - to act as inspiration for the design of the bike’s ‘face’.

“Although it is things like the bike’s ‘face’ that get the public’s attention, the biggest part of a designer’s job is to get the details right – those subtle touches that make sure everything fits and works properly to accommodate the engineers’ requirements, but also allows your eyes to just glide over the bike. 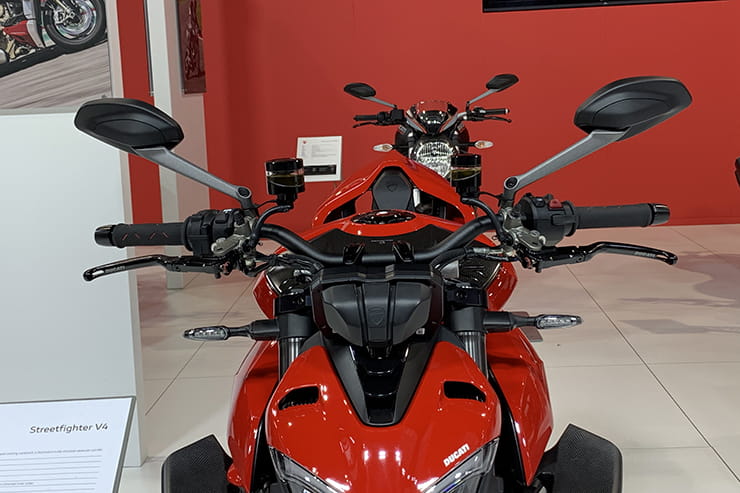 Jeremy wanted the bars to angle upwards at the ends for added aggression. Ducati’s engineers wanted the bike to be as practical and comfortable as it was crazy and fast. The result? Bars that tilt down slightly

“Of course, we can only have so much influence, the engineers need to have a say too. For example, on the Streetfighter, I wanted the handlebars to be angled slightly upwards at the ends for a more aggressive stance that pushed the rider’s elbows upwards and outwards. But the engineers and ergonomics team wouldn’t allow because one of the aims of the Streetfighter was that it had to be as practical and comfortable as it was focused and aggressive. So, the bars are angled slightly downwards instead.

“One of the hardest things about making a bike like this is that machines like the Panigale V4 which it is based on have complex electronics involving many sensors. Under the fairing of the sports bike there are wires and cables running everywhere. I’m particularly proud of the area behind the radiator where we sculpted the minimal panelling to direct warm air away from the engine, but also managed to hide some of the more functional and less aesthetic parts of the engine and cooling system that were never originally meant to be on display. Some clever use of additional panelling around the front of the engine covers up most of them, but there are still some exposed cables further back, Thankfully, most of those are covered by the rider’s legs. 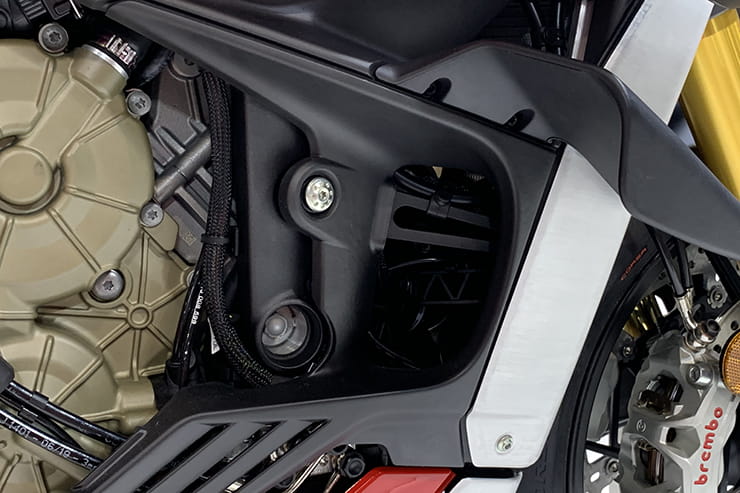 Look closely behind the panels and you can see the carefully hidden cabling, wires and fans

“As a designer there are some tiny details that mean a lot to me, but many people won’t even notice. Like the tiny bolt head underneath the Italian flag on the lower fairing. The engineers wanted a fastener to keep the bodywork rigid, but I didn’t want to put it directly on the join. So, I put it underneath, which was more complex to manufacture, but looks much neater.

“Also, the bolt for the front engine mount. It’s polished and styled a little more than it needed to be because I wanted something that looked special. Something that would make an owner proud when they clean the bike.

“And the sculpted area at the top of the tank where the steering damper ends up at full lock. Because the handlebar design is different, we had to change it from the faired V4 Panigale, which has clip-on bars.” 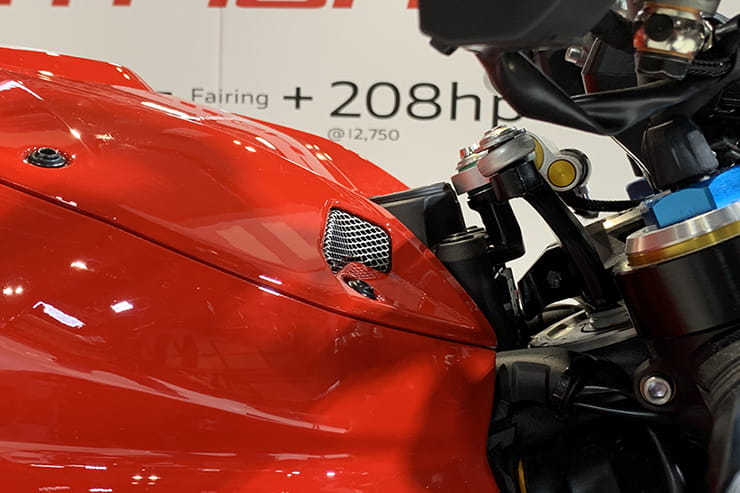 High bars give the steering damper a different run to the low-barred Panigale. Someone has to make that work and look this beautiful too.

Following the discussion with Jeremy, I could look at the Streetfighter in a very different light. But what was more interesting was the walk around Motorcycle Live the following morning. With his words still in my head, I could look at Kawasaki’s Z-H2 in a different way too and the Triumph Street Triple and the MV Brutale.

Triumph’s designers have done the neatest job of hiding away the wiring and details, but then, they’ve had much more time to work it out and, anyone who remembers the original T509 Speed Triple in 1997 will know how easy it is to get these things wrong.

Ducati’s new Streetfighter is a stunning machine, mixing the raw, almost-handmade look of a factory race bike with a sense of individualism you normal only see on top-end, home-built specials. Yes, it’s expensive, but I know of many riders who’ve spent much more than that to build their own showstopper streetfighter from a Japanese sports bike, tuned the motor to make close-on 200bhp and fitted the very best chassis, brakes and suspension components to make it handle. And their bike doesn’t come with full dealer back-up and a warranty.