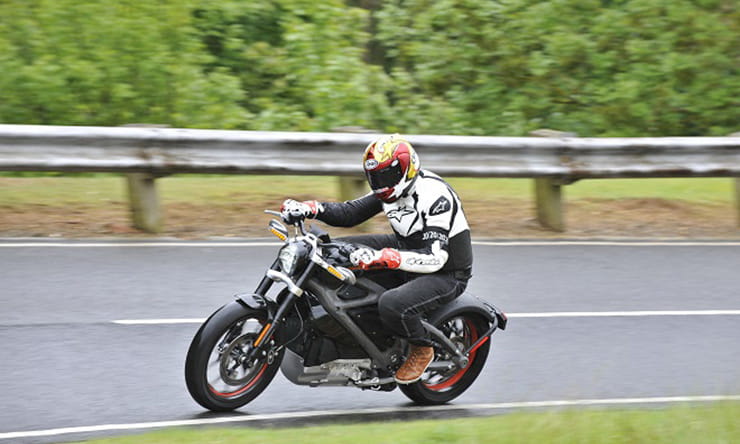 I have it on good authority from a writer close to Milwaukee that the word cliche was invented for Harley riders. Until now that is. Whether you like it or not, there's an electric revolution happening in motorcycling and Harley-Davidson are here to show they're at the forefront.

Meet the Harley-Davidson Project Livewire. It's Harley's view of what the next generation Harley-Davidson will look like. An electric motorcycle that shows a vision of the future.

As the Harley-Davidson Project Livewire experience rolls in to the UK and across Europe, some 7000 potential customers in the USA have already test-ridden the bike in the States. Another 12,000 people have already 'ridden' the Livewire on a rolling road. And that means Harley boffins have some 15,000 pieces of feedback to sift through. Rather them than me going through those spreadsheets we went to try it in the real-world. 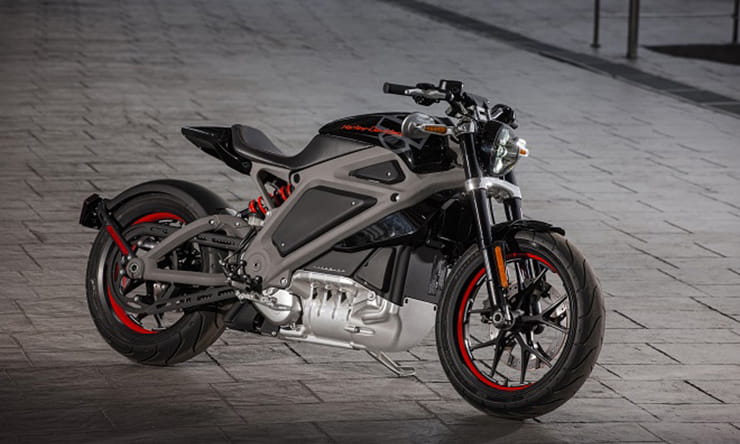 In a world lead by Big Data where social media knows you every move, Harley will know if it's worth launching the bike. And know if they do launch it, how much people will be prepared to pay for it, how fast, what noise it should make, and what it should look like is all part of the feedback.

86 per cent of people who have ridden it so far said they liked it, 74 per cent said they'd consider buying one. Impressive numbers for a firm with its root buried in traditional V-twin cruisers. The Livewire is designed to show riders what an amazing ride you can have on a Harley-Davidson electric motorcycle. Harley's Livewire experience is a genius bit of marketing to get feedback on their new project. After a quick spin around the oval and the Alpine course at Millbrook, they've certainly convinced me. It's weird, but in a good way, it’s as easy to ride as a dodgem, and accelerates way, way faster than you’d expect; 0-60mph comes in under 4 seconds with an alien wail of gearbox and electric motors quite unlike anything I’ve ridden, let alone a Harley.

On a rain-lashed Millbrook Proving ground in Bedfordshire Harley is letting 200 people from journalists to owners, and dealers ride the bike over next four days. It's a good-looking beast is the Livewire. Combining heritage with technology. 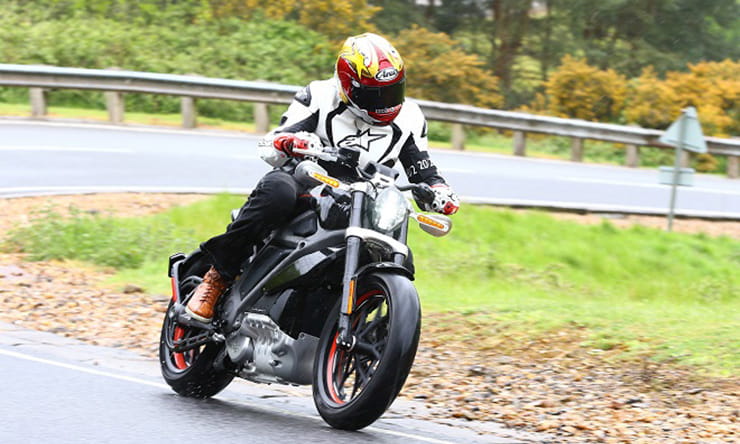 Until now, unfaired electric motorcycles haven't been that pretty. And they certainly haven't been that popular in the UK at least. We've already seen Zero motorcycles launch in the UK and fail, and then Brammo being bought out by Victory. It's a complicated world, but the manufacturers all want a slice of the electric revolution pie and its future servings. Most of the bikes so far struggle to hide the batteries that power the electric motors unless they're faired like the Mugen Shinden or Energica. But this is Harley and they've designed a bike that looks as good as any Harley on sale currently.

It cleverly combines Harley's traditional styling with cutting edge LED lights, a touchscreen dash and that stunning aluminium engine cover which hides the batteries and the electric motor. Harley say the inspiration for the cover came from the superchargers of Top Fuel Dragsters. The frame itself is Harley's first cast aluminium frame and weighs just 6.5kg. The bike itself weighs 210kg in total. A Harley-Davidson 883 Sportster Low weighs in at 245kg dry, or 255kg ready to ride. Battery technology is improving all the time, and although they're still pretty hefty to power a bike of this weight and speed, you don't need a conventional gearbox, a starter motor, a clutch, or any of the things which make the weight of a conventional motorcycle add-up.It can do backroads (even pretend ones), but range is the bike's biggest issue at the moment. 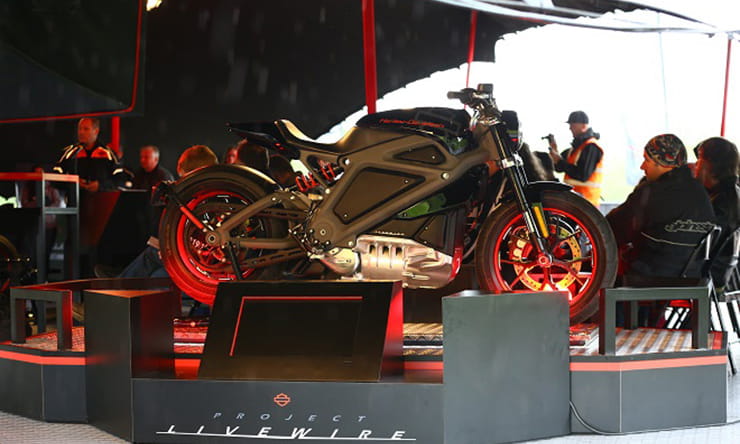 Brakes are normal Harley run calipers too, just squeeze and it stops, and the rest of it is all pretty conventional along with the Harley switchgear. If ever you could call this bike conventional.

But you can’t get away from that squawk of the gearbox and the torque of that motor and can’t help but be staggered by the way it pulls from zero throttle.

Millbrook is designed to test vehicles and features a section of track that replicates an Alpine mountain pass. There are roundabouts, junctions, bumps and curves like any normal UK road, but you can test in controlled-conditions. At one point exiting a roundabout on Millbrook's road course I span it up sideways on purpose and the noise it made sounds like an eighties Kung Fu movie: "Hai Ya".

It hits hard but is easy to dial in as much or as little gas as you want. In town it will be really easy to ride and I can imagine the Bike Shed boys are already working out where they can chop it.

Yes, it is weird, it is incredibly easy to ride, and it is the future. I've rarely ridden a motorcycle that I will be telling so many people about, and it brought a massive smile to my face. I actually loved riding it. And I'm as suprised by that as anyone. It is a massive feat to make a bike this good at your first attempt using new technology.

We didn't get to test the handling out as it was lashing down, but it feels like a Harley in the corners. But, as hilarious as the noise is, somewhere deep down I can't help missing the throb, vibration and pollution of a real petrol-burning motorcycle. The engine is the heart and soul of a motorcycle. So I'm going to call these something else. From now on electric motorcycles are Electrocycles in my world at least.

Technology for Electro-cycles is improving all the time and there will be a point when we all ride them. I've already owned an Oset electric trials bike, so I do get what they are about, and for off-road use at least they're a brilliant concept - zero noise, easy to look after. It makes sense. But with an expected real range of 50miles before the Livewire needs a charge for at least 30-minutes, I can't see it just yet for the road. But you can’t help but admire the technology, the way it rides, and the chievement of building such a great-looking motorcycle for a new generation. I'm an early adopter of technology and remain incredibly impressed how production ready the Livewire looks and feels. But, as impressive as the Livewire is, I'm going to hang on to stinky, polluting, noisy motorcycles as long as I can and am just off for a ride on my two-stroke Yamaha TDR250 motorcycle, for now at least.

With Harley-Davidson now confirming the Livewire as an incoming model expect to see more information in the coming year.

For more information on the future of H-D, click here 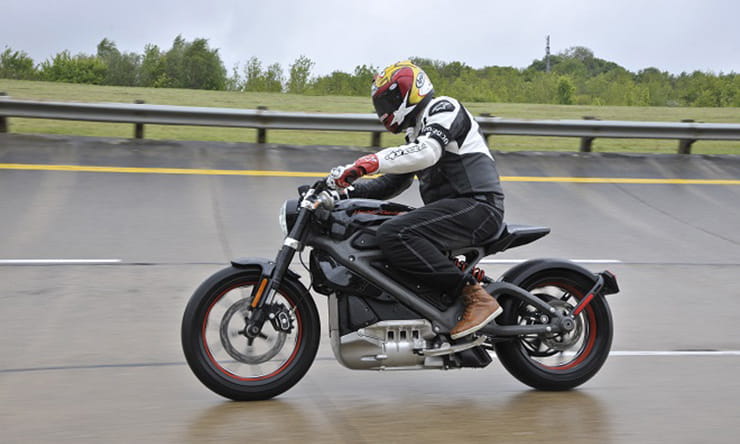