The rise of the small adventure bike 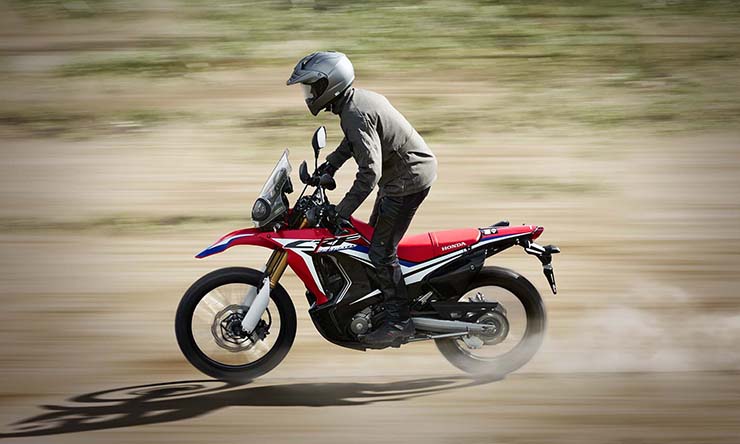 As the world famous Dakar rally enters its fifth day, we look at the new breed of bikes that prove not all adventures have to be big.

With many experts predicting that sales of big, unruly adventure bikes are beginning to peak after years at the top of the big bike charts, and new bikes from Honda, Suzuki, Kawasaki and BMW, plus new bikes from KTM and Yamaha on the cards, it looks like mini adventure is where we’re headed next.

And when one of the world’s leading travel adventure riders, Austin Vince, a man who has ridden round the world twice just for starters, chooses a Honda CRF250L for his recent trips you know we don’t all need 1200cc. 270kg monsters to make every day an adventure.

Vince says a 250 is all you need, and if it’s good enough for him and his recent map reading trips to the Pyrenees on his trusty Honda, then who are we to argue.

They’re easy to manage, easy to ride, easy to pick up if you drop them in the dirt, robust, reasonably cheap to buy new, cheaper to insure and run, and most offer ridiculously high fuel economy as well as decent comfort.

From the daily grind as a commuter, to a weekend trip to the mountains and taking in some trails while you’re away, a new breed of younger riders is joining the adventure ranks with these smaller adventure bikes too.

We take a look at some of the new small capacity bikes, the kit and the events set to make mini adventure a big deal in 2017.

When BMW come in to the small adventure sector with a bike wearing the legendary GS name, the rest of the world sits up and takes notice.

Built in conjunction with the Indian firm TVS Motor Company, the bike is developed by BMW Motorrad in Germany.

Styled like a GS with genuine all-round ability as standard, the G310 GS features a 313cc liquid-cooled single-cylinder engine shared with the naked G310 R and making a claimed 34bhp. It rolls on cool-looking five spoke 19” front and 17” rear alloy wheels which means a decent selection of aftermarket tyres will be available for a bit of gentle mud plugging.

We had a sniff round it at the unveiling at the Cologne Show and were impressed. It’s big enough to carry off as a bigger bike, but not intimidating, and it definitely looked as though it would be capable of covering decent miles.

Using the name of its bigger 1000cc brother and nicking its beaky styling, the smaller V-Strom is powered by the 25bhp, 248cc parallel-twin motor from the Inazuma.

It comes packed with adventure bike styling that's in line with its 650 V-twin and 1000cc V-twin brothers and promises a practical daily ride thanks to nice features like a rear rack and a 12v power outlet, with a touch of adventure.

It’s perhaps not quite so trail-focussed as the Honda and BMW but still should cope with gentle adventures off-road and looks set to be a great commuter bike. Suzuki claim the bike has a 300-mile tank range!

Suzuki say the V-Strom 250 design concept is: “Massive and Smart. Massive for the solid feel of its well-balanced body and Smart for its sophisticated and practical design that provides ease of handling.”

The motor itself is said to be tuned for low and mid-range torque and designed to be friendly for new riders and riding turning back to bikes.

We asked Suzuki for details on prices and availability but, as yet, nothing is available.

The new CRF250 Rally promises Dakar looks in an easy to ride adventure chassis based heavily on the accomplished CRF250L used by explorer Austin Vince.

Weighing in at a claimed 157kg wet, and using a retuned (24bhp) version of the CRF250L motor, the Rally features lots of big bike luxuries like LED headlights and indicators, plus a decent fairing for longer distance riding. It also comes with trail-focussed tyres running an 18-inch rear and a 21-inch front tyre.

The man responsible for the team behind the bike, Mr Eiji Sugiyama, Project Leader of the CRF250 Rally, said: “The rally racer replica segment is an exciting one for us, with the global, human appeal of everything that Team HRC is fighting to achieve in the Dakar rally. We really wanted to build on the capabilities of the CRF250L and open up new opportunities for riders young and old. So, with the CRF250 Rally we set out to make a motorcycle that looks like HRC’s CRF450 Rally factory machine, is fun to ride both on and off-road for weekend adventures, comfortable to tour with and useful and practical for daily life. It brings the spirit of Rally-raid racing to every ride.”

No prices for the CRF250 Rally been set yet.

Using the promise of any road, anytime, the new Versys-X 300 builds on the excellent adventure touring reputation of Kawasaki’s Versys 650 and Versys 1000.

The Kawasaki is definitely more road focused than some of its 2017 competition, but should be a great commuter and small tourer. It features a decent size fairing and promises big mileage comfort.

Using a 296cc parallel twin motor based on the Z300 lump but retuned for more mid and low-end grunt, the Versys-X 300 is promised to deliver big fuel economy with a claimed 250-miles between fill-ups.

It uses a new steel backbone frame using the engine as a stressed member, and long travel 41mm forks with a 19-inch front wheel and 17-inch rear. It costs £5149.

Okay, so we only have spy shots of the new KTM 390 Adventure and no definite info, but it definitely looks the part and can hold its head high in KTM’s established adventure company. The nose on this prototype appears to be from the pukka 450 Rally bike.

Under development at the moment, and expected to be launched at the end of this year, the new KTM uses the same recipe as the other bikes here.

Take the bigger bike’s styling, use the credibility of the large capacity adventure bikes, and use a smaller chassis with a smaller capacity motor. We can’t wait to see more of this bike when our spy snappers get back out this year.

... a Yamaha T3? Although there’s no obvious mini adventure bike on sale from Yamaha, I’d put money on them working on an MT-03-powered adventure machine, much like the T7 Concept announced in November.

Yamaha say their “development for the adventure class is very much focussed on the new T7 concept machine revealed last November.”

That stunning new T7 adventure bike (pictured) is derived from the MT-07’s motor, but heavily modified, and due to be a production model next year. But, according to our sources smaller MT engines, like the 321cc MT-03 one, used in adventure style chassis are a direction that Yamaha are definitely considering at their Italian R&D plant. 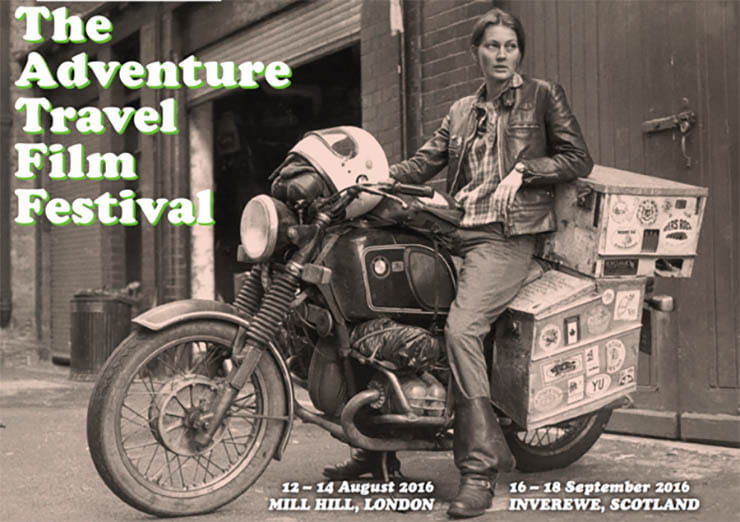 You want inspiration and to arrive and camp on your adventure bike (of any size, doesn’t have to be big or small)? Well then head down to London for a weekend of inspiring travel films from the 1920s to now. Some of them even include motorcycles. It was sponsored by Honda last year and attended by former world motocross champion Dave Thorpe. It is run by Austin Vince so you’ll be in good company. It’s held at Mill Hill School in London, NW7. The poster above is last year, but the London dates are still August 11-13 in 2017: http://www.adventuretravelfilmfestival.com/uk-festival/

Come and meet link-minded adventure riders young and old and chat with one of the biggest travel icons of all – Sam Manicom – in the Ace Café’s bike friendly surroundings.

Sam is a famed adventure author who learned to ride a motorcycle and decided he wanted a one-year adventure. Eight years later and some 55 countries later he came home!

Mixing the legendary protection of Shoei with a ventilated off-road style lid, and a proper visor for higher-speed runs, the Shoei DS has been tried and tested by the BikeSocial team extensively and it’s a favourite.

The Richa Touareg is one of the best value adventure spec jackets on the market. Designed to be waterproof, yet with flaps that open on the chest in summer, it will keep you dry on the way to work, and keep you cool on that adventure ride to Scotland in the summer.

These give the right look of an adventure man on a mission across the Sahara, but are fully waterproof and breathable too, yet offer plenty of protection for off-road excursions with a stiff sole and plenty of ankle protection.