With the launch of the eagerly awaited new James Bond film, No Time To Die, complete with two bike chase sequences we wondered which have been the ones with the best (and worst) motorcycle sequences – here’s our pick, in reverse order…

What? A Kawasaki Zed in a Bond movie? Yes, there is – but don’t get too excited. The Roger Moore-era Bonds were never that great for bikes, TSWLM, although a decent flick, is more remembered for its Lotus Esprit that turns into a submarine, and the Z900 concerned is fitted with some kind of detachable, explosive sidecar. It’s used by a baddie to chase Bond in the Esprit and, as anyone who’s ridden a sidecar knows, doesn’t get very far. Unfortunately, the villain’s cliff death plunge would look more realistic if it was done with Lego. Still, at least it also features the debut of the first Wet Bike, which Moore actually rides. 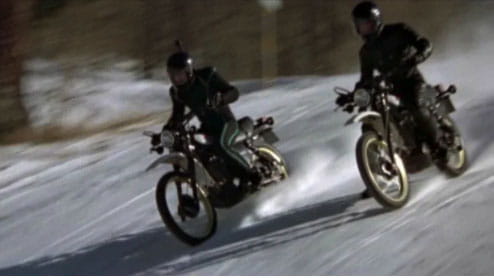 Another Moore-era Bond and, to be frank, one of his worst, not least because the star was by then 54 and at one point cringingly seduces teenage character Bibi Dahl. You couldn’t imagine it being allowed today. In FYEO’s defence, however, there is a half-decent bike chase when two villains aboard Yamaha XT500s (fitted with machine guns) pursue a skis-clad Bond down a bobsleigh run (as you do) and across a few mountains. Sadly, Italian stuntman Paolo Rigoni was killed during part of the bobsleigh sequence… 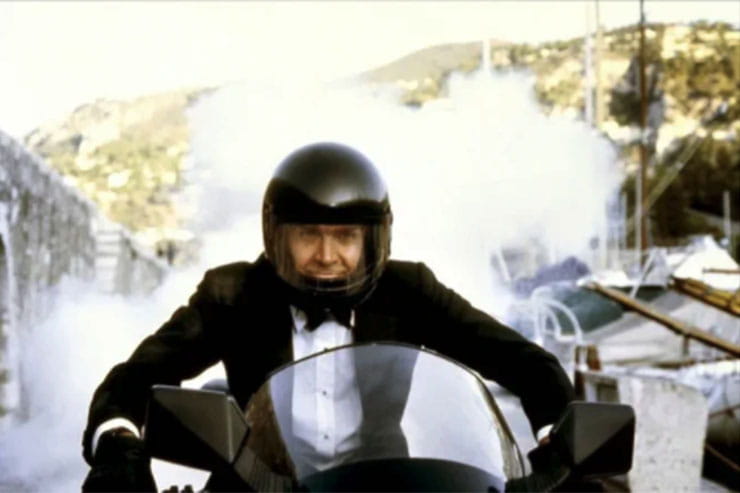 It’s easy to dismiss NSNA. It’s the only ‘non-official’ Bond, a remake, effectively, of Thunderball; then  53-year-old Sean Connery wears a toupé and it’s got Rowan Atkinson in it, ferchrissakes, so it’s not hard to imagine where he got his Johnny English idea from. But it’s also the only Bond so far in which our hero rides an official, Q-branch supplied, gadget-lavished motorcycle, a mildly disguised Yam XJ650T (supposedly, we suspect a trail bike was under the fairing) complete with knobblies and rocket launchers. Bond, meanwhile, wears a Tux and ‘80s Nava polycarbonate lid. Remember them? 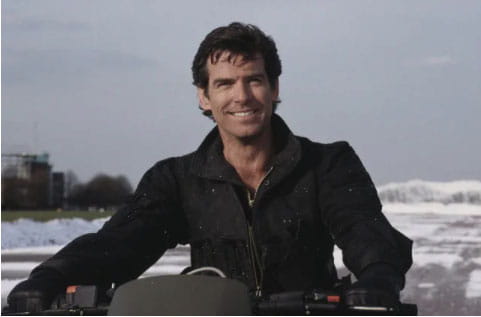 The W16 surely ranks towards the top of all the bikes you’d never expect to see in a Bond flick, but the Italian trailie stars in the opening sequence of Pierce Brosnan’s debut as Bond, in Goldeneye. In it, Bond nabs the supposedly Red Army spec Cagiva and uses it to chase after a pilot-less Cessna as he bids to escape a Russian military facility while being chased by the usual baddies. The stunt work, riding the bike over a cliff, was by French stunt rider Jacques Malnuit. 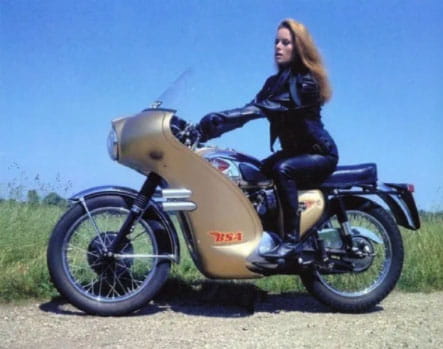 An oldie but a goodie, even though the bike sequence is fairly brief. Leather clad baddie Fiona Volpe (played, mostly, by Luciana Paluzzi) rides a gold faired BSA A65 Lightning 650 after some dastardly assassins before promptly dispatching them with some bike mounted rockets. Go girl. She then disposes of the bike in a nearby lake. In truth the riding was done at a specially ‘dressed’ Silverstone and by late, diminuitive 1960s Brit GP racer Bill Ivy, who reportedly wore a wig. 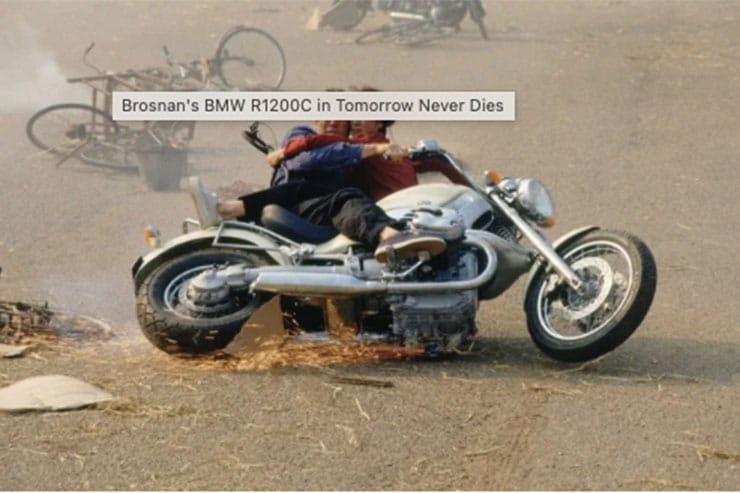 Possibly the oddest choice of Bond bike ever which came about simply because BMW were ‘vehicle partners’ in the film (remember the 750 and Z8 cars used, too?), the cruiser 1200C was just about to come out so some genius decided to give Bond a cream coloured one your Gran would choose to ride. That said, the bike stunts, including a jump, two-up, over a helicopter, and which were done by French stunt legend Jean-Pierre Goy, are among the best in any Bond. 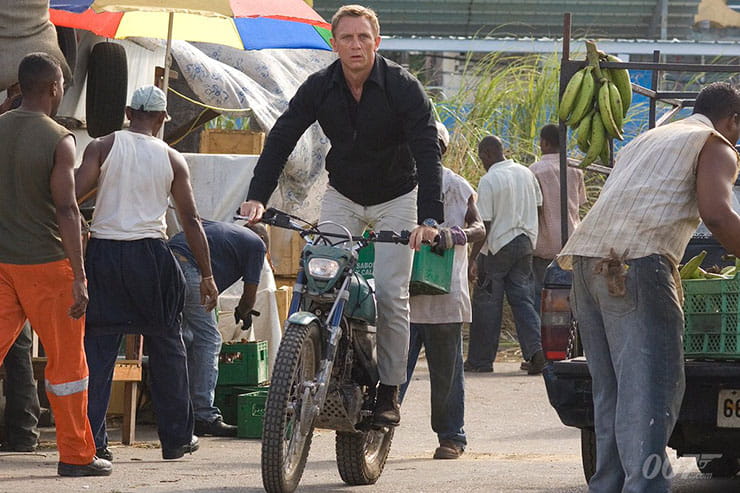 You’d probably forgotten after all the hullabaloo surrounding the rooftop bike chase in Skyfall, but bikes, or, more specifically, A bike (a camouflaged Montesa Cota 4RT trials machine fitted with different tank and seat), also stars briefly in the preceding Quantum of Solace when Bond (Daniel Craig) pursues ‘Camille’ (Olga Kurylenko) through the streets of Port-au-Prince, Haiti culminating in an impressive bike jump into a boat. The bike-to-bike filming, incidentally, was done by 11-times British MX champion-turned-stuntman/camerabike rider Rob Herring, who’s also worked extensively in the Mission:Impossible series, among others. 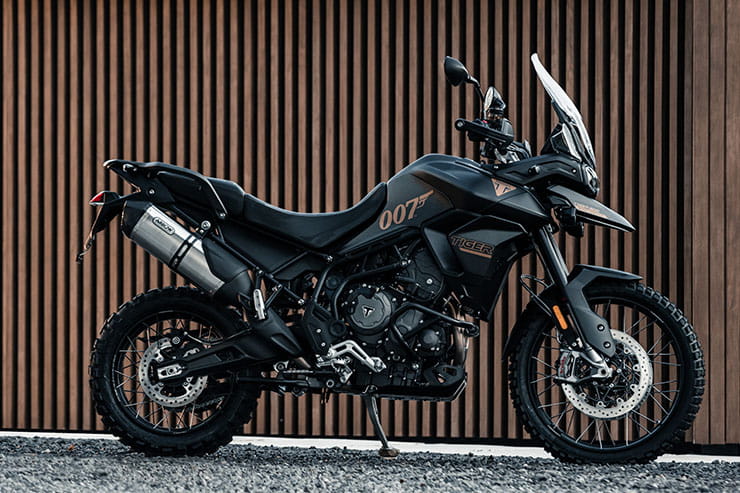 Zooming right up to the present day with the first of not one, but two Triumphs. The British marque signed up to become official vehicle partners (along with Jaguar Land Rover) for No Time To Die, two major sequences required two different bikes and, after stunt coordinator Lee Morrison and director Cary Fukunaga became interested in Triumph’s special Tramontana Tiger-based rally racer, the Hinckley marque suggested the then, still top secret, prototype Tiger 900 Rally Pro. Ridden during a stunt sequence in Norway, Morrison was impressed, too: “We spent a long time of the Tiger and it is so well balanced,” he said. “I honestly think it’s one of the best bikes I’ve ever ridden.” Triumph have just released a limited edition ‘Bond Edition’ of the bike you can buy – for £16,500 Until this week’s release of NTTD, 2012’s Skyfall had been universally acclaimed as possibly the best Bond flick ever. It also had, until now at least, the best motorcycle sequence. In the opening scene Bond (Daniel Craig) chases baddie Patrice (Ola Rapace) across the rooftops of Istanbul, both aboard supposedly police Honda CRF250Rs. Stunt star Robbie Maddison did most of the riding although Craig did some, with Herring again riding the camera bike. 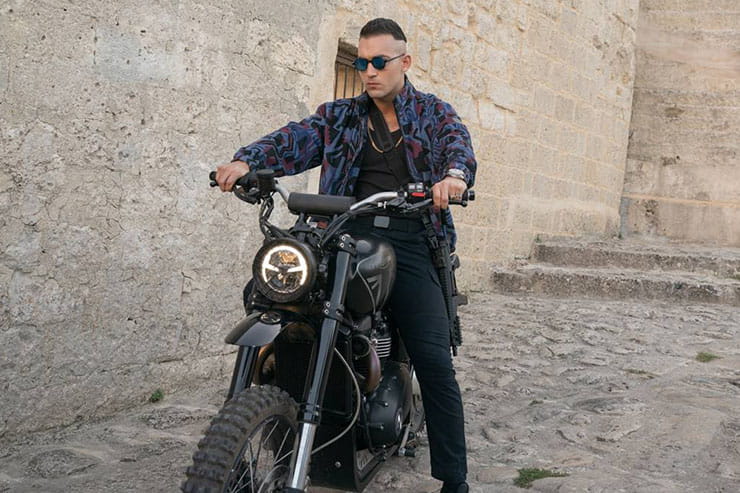 Yes, we’ve saved the best (and most recent) ‘til last – but believe us, it’s deserving. Lee Morrison’s stunt team knew they wanted to use the Scrambler 1200 XE from the outset when the tie-up with Triumph took place and the big, more off-road version of Hinckley’s retro Scrambler gets a helluva work out. It’s first used in the hands of baddie Primo, then, even more impressively, by Craig’s Bond himself in the Italian walled city of Matera culminating in a leap (as seen in the trailer) over a 45-foot, near vertical stone wall which was actually done by British four times ex-world enduro champion Paul Edmondson. Again, Triumph issued a limited edition (just 250) ‘Bond Edition’ version of the bike, this time in March 2020, which instantly sold out.
Recommended Articles