Exclusive interview with Suzuki boss: “Many customers are waiting on maybe a new Hayabusa so we will take care of them in the very near future” 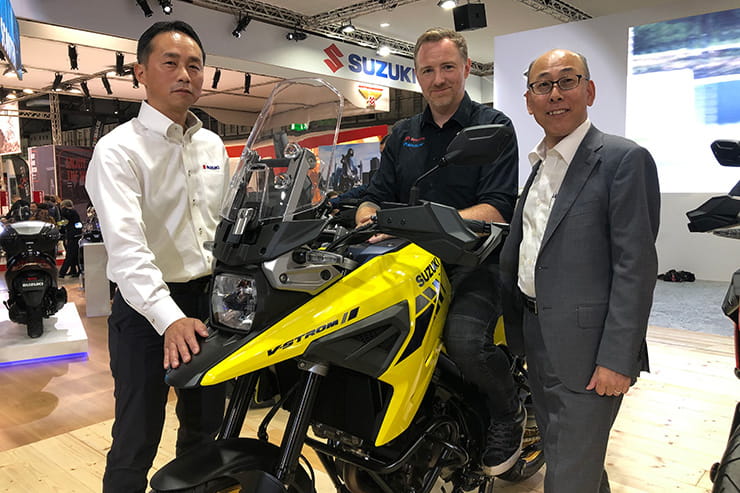 As the dust settles after another Milan Motorcycle Show, the traditional opportunity for all motorcycle manufacturers to show their gleaming new production models for the following year, on the face of it Suzuki hasn’t been grabbing headlines with a salacious and intriguing concoction of new metal. Again. In fact, with the new Fireblade, V4 Streetfighter and supercharged Z H2 in the mix, anything but a revolution would have struggled to dominate.

However, despite the attention seemingly being thrust towards the aforementioned sexy, fast and outrageous new machinery, our web visit figures and social media stats since last week have certainly shown the one-and-only new Suzuki for 2020, the V-Strom 1050, as a very popular introduction.

For 2019, all we saw from the 110-year old Japanese company was the Katana and for 2018 it was an SV650X. Just three ‘new’ models in three years is a feat which doesn’t seem to phase the two Suzuki business leaders we questioned at EICMA. Satoshi Uchida (Deputy Executive General Manager) and Akira Kyuji (Group Manager, Motorcycle Sales Operation) remain buoyant about the future for Suzuki.

After the world premiere of the new V-Strom DL1050, Uchida san said, “Today, I’m very happy. In 2017, we launched nine models so this time we are trying to create more impact to the market with this model, the DL1050.”

Kyuji san offered a more pragmatic look, including a focus on the second-hand market “Of course, from media point of view, in the past three years maybe we don’t have enough new models.

“For Suzuki the first priority is new bikes because people are waiting for them but we need to take care of all our other Suzuki customers. Let’s say in Germany or France the used bike vs new bike market is four times or five times bigger. So yes, when we introduce new bikes we want the customers to buy new bikes but at the same time we cannot forget the Suzuki loyal customers who keep riding used Suzuki’s, so it’s also our job to take care of these customers, maintaining a good Suzuki dealer network across Europe.”

Suzuki’s approach of looking after and retaining its customers appears more important than the razzmatazz of a new machine, also described as ‘show business’ by Mr Kyuji. He said, “Yes the priority is to make new bikes to be in the market in a competitive way but we also want to take care of the existing customer, so in both ways we need to do our jobs. We cannot forget about the customers who bought new bikes last year, two years ago, five years ago. If we forget about these customers and only take care of the new customers it’s not a good way to make a business.” 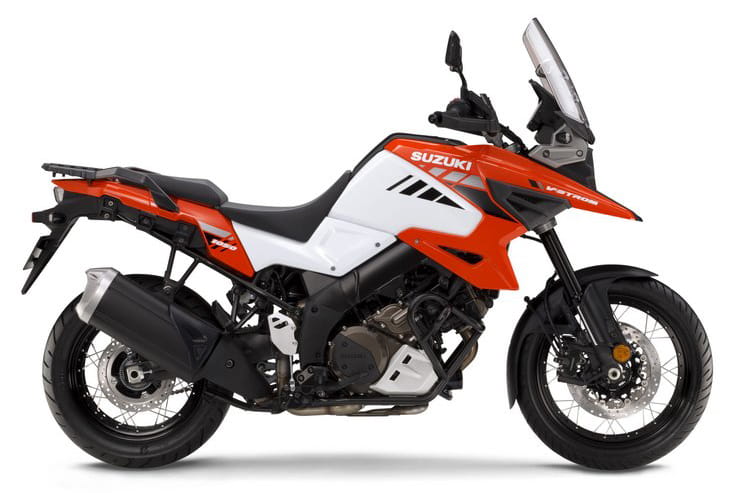 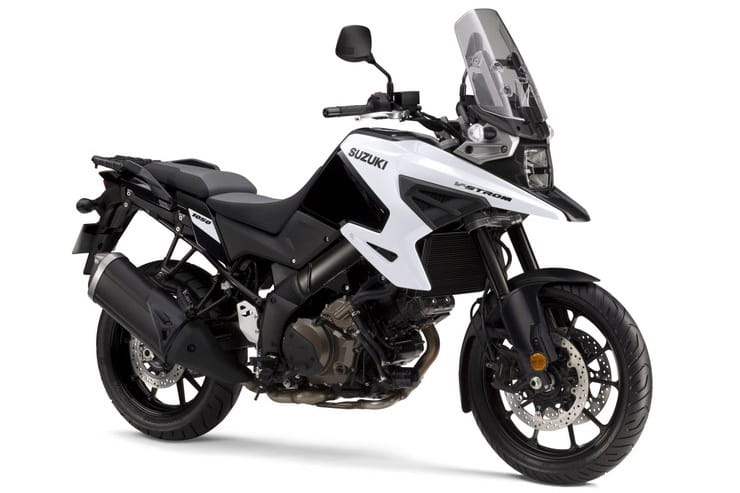 Courtesy of the Euro 4 regulations, the ever-popular Suzuki GSX1300R Hayabusa ceased production at the end of 2018, yet a brand new and massively overhauled version has been strongly rumoured before we said bye, bye ‘busa.

The rumours have their foundations thanks to our contributor, Ben Purvis, and his tactical nous when it comes to filed patents, yet those rumours were cemented into place when Mr Uchida pulled his happy face when responding to the obvious question about a new version by saying, “Many customers are waiting on maybe a new Hayabusa or other legendary models so we will take care of them in the very near future. We are carefully watching customer’s opinions.”

Moving away from the chat about new ICE machines, we speak about a subject that threatens to explode, not figuratively. The electric motorcycle revolution continues to be within touching distance with manufacturers dipping their R&D shaped toes into the pool of alternative power with concepts and patents-a-plenty. Harley-Davidson are one of the only mainstream marque to have taken the plunge other than the KTM Freeride motocross range and an e-scooter from BMW, but what about Suzuki’s plans. As a forward-thinking Japanese powerhouse, surely they’d be on the cusp of an e-motorbike…

Mr Uchida replies, “Broadly speaking, in two-three years range, it’s impossible to sell the volume. Maybe 10 years later or 20 years later it will happen. Many Governments are pushing, we cannot neglect such kind of movement but progress from a commercial base it takes a really long period. We have to respect their (big city Governments) movement so we are willing to develop prototypes but still we need time to commercialise.”

Mr Kyuji adds, “For big cities like London, Paris, Tokyo, Beijing it’s important to take care of the air pollution but when you talk about EV, EV itself doesn’t create any CO2, but if the generation of power is done by combustion, somehow you still use CO2. For example, in China, I think 85-90% electricity is created by normal fossil fuels, so while Governments push EV, unless they turn completely into windmill, solar or nuclear power generation 100%, this movement wouldn’t solve any issues.”

We are not totally against making EV cars and bikes, I think the direction is correct, but we need to be a little bit more cautious in weighing-up the method otherwise we lose everywhere. An article I read in the Financial Time two years ago said, ‘if the whole EU countries shift car production, normal cars with combustion to EV, in 2040/50 in Europe you need to generate more electricity so you need another 50 power plants.’ Who can make the kind of electricity needed?

If we use the nuclear power plant to create the volume of electricity then it’s not the correct scientific conclusion.” 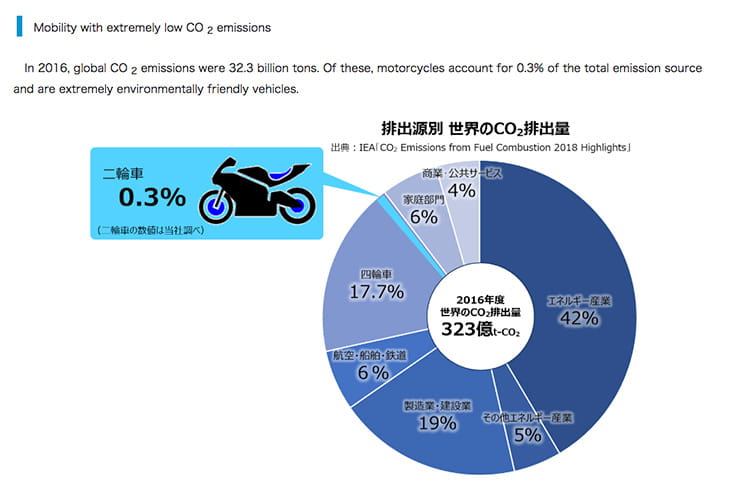 Above: Evidence that motorbikes are good for you

Following this interview, Kyuji san forwarded a publicly available research document by Yamaha Japan, titled ‘Yamaha Motor Group Environmental Plan 2050’ which demonstrates that in 2016 the total global CO2 output was measured at 32.3 billion tonnes, of which motorcycles accounted for just 0.3%, demonstrating that motorcycles are not only extremely environmentally friendly vehicles but are the fastest and most fuel-efficient way to travel around a city, and compared to passenger cars, the impact of CO2 emissions is 1/3.

Which brings us onto the current ICE spoiler, in the eyes of those who enjoy the smells, sounds and bhps emitting from their motorcycle engines, Euro 5. The latest batch of emission regulations is set to be phased in on 1st January 2020 so every new bike on sale from that date will have to comply and it comes with its challenges to manufacturers. Outline regulations are published in advance but the details come later, so the difficulties lie with the fixed amount of engineers for a broad number of products leaving little time to complete every project, update every model or get new ranges up to the compliance level.

Mr Kyuji explains, “It’s a difficult subject because when it comes to safety, noise levels and environmental resolution then the regulations make everything better but when it comes to the production and engineering of motorcycles then it takes time to meet such high levels. I think all the manufacturers agree that it should be gradually introduced rather than all of a sudden, these big restrictions. So then obviously our customers end up paying the extra costs. We do our best to reduce the costs to meet the requirements but we need more time.”

“The engineering department has to anticipate how strict the regulations will be, they have to imagine what will come. They have to judge the strategical approach about the engine changes,” continued Mr Uchida.

The budget to compete in MotoGP will be phenomenal with R&D, logistics, tyres, fuel, rider salaries, spare parts, electronics and so much more. The same then goes for the factory-supported race operations around the world, including the oh-so-important Suzuka 8 hours and the British Superbike team, run by Hawk Racing. But what are the benefits?

“There are several reasons why we go racing; one is branding and the internal motivation it creates for the employees, dealers and because GP is the pinnacle of motorcycling racing, it is so advanced, only several companies can compete, including Suzuki, so it’s important for the motivation.

Technically, we have to use the MotoGP technology to adapt the new model development, so this is a benefit, e.g. the variable valve timing that made it onto the GSX-R1000. Also, with endurance racing, the engineers can understand the durability of our products, they can learn a lot of the extreme conditions,” explain the two hierarchical lynchpins from Suzuki.

In its current guise, the Team Suzuki Ecstar squad has claimed three wins and a further 13 podiums over the last five seasons (up to and including Malaysia 2019), as well as the 2019 British Superstock 1000 championship.