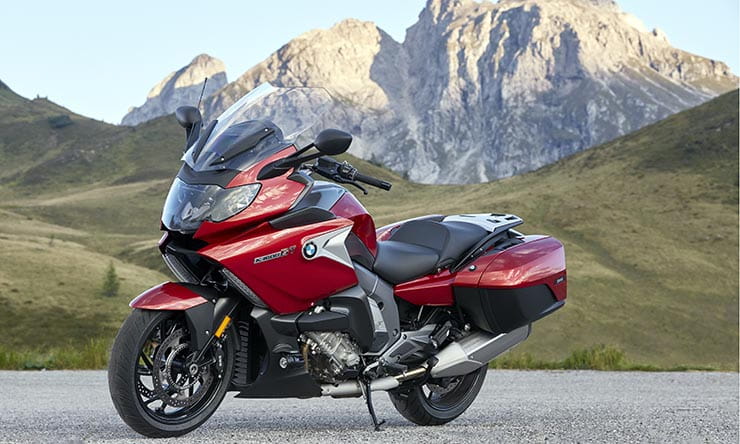 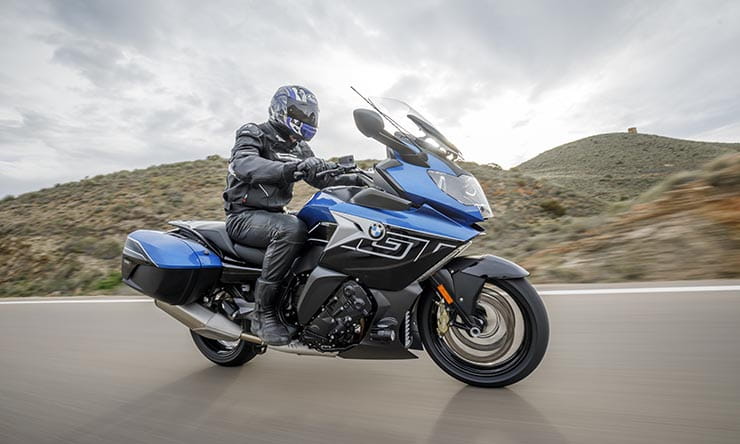 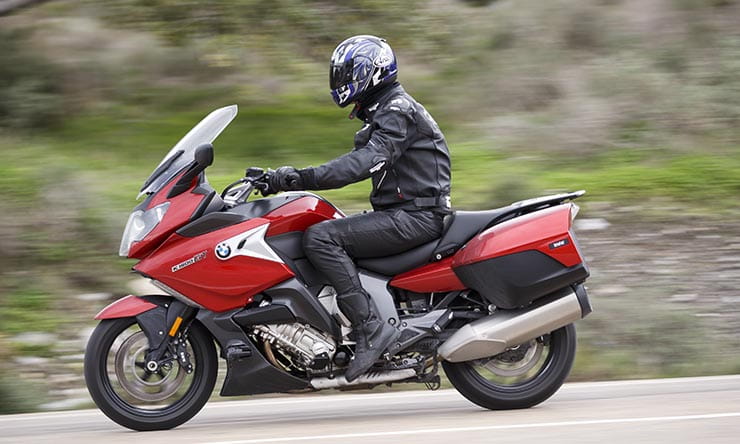 On most bikes this would be getting slightly annoying. It’s been raining for the last 15 minutes of this launch ride on a cold day in southern Spain. Since the first drops hit the K1600GT’s screen I’ve been waiting for our lead rider to stop so I can retrieve my waterproofs from the BMW’s panniers. But he and the other three riders are wearing textiles, not a leather jacket and jeans like me, and we’ve continued the main-road blast back to Almeria with barely a slowing of the pace.

Thankfully the revamped K1600GT is doing a fine job not only of shrinking the straights and navigating the flowing and increasingly slippery curves, but also looking after its rider. On the straights its magnificent six-cylinder engine is revving through the gears with creamy smoothness as I tap through the quick-shift enable gearbox, before the BMW slows and negotiates the turns with impressive composure.

Equally importantly, its full fairing and large, electronically adjustable screen are keeping off just about all the rain while the heated grips and seat, whose power I’ve just turned up, mean I’m not getting cold either. The K1600GT’s star turn remains its mighty six-cylinder engine, but its host of comfort and convenience related features, some of which have just been updated, are integral to its appeal.

Improved protection was one of the aims of this revamp, which comes six years after the K1600GT and its more touring oriented GTL sibling brought BMW’s straight-six motoring tradition to their two-wheeled division. The electrically adjustable screen is slightly larger and the fairing is subtly reshaped, especially around the rider’s shins (where the two lockable cubby-holds, one of which holds a phone charger, are reworked), while the air vents, which swing out to divert cooling air onto the rider, have been made much bigger.

There’s no change to the 1649cc, dohc 24-valve engine, although its exhaust system has been redesigned to get the bike through Euro4. The maximum power output of 160bhp is also unchanged, as is the impressively flat torque curve that shows the big six churning out 70 per cent of its maximum by just 1500rpm. The only engine-related mod is the addition of a reverse gear, working off the starter motor. It’s used by pressing a button on the left bar, then the starter button.

The GT’s most significant news is arguably its pioneering ability to be fitted with BMW’s Intelligent Emergency Call, a car-derived system that automatically dials for help in the case of a crash. Depending on how severe the accident is judged to be (from the transmitted data), BMW’s call centre either instantly alerts the emergency services or rings the rider via the bike’s in-built speaker. 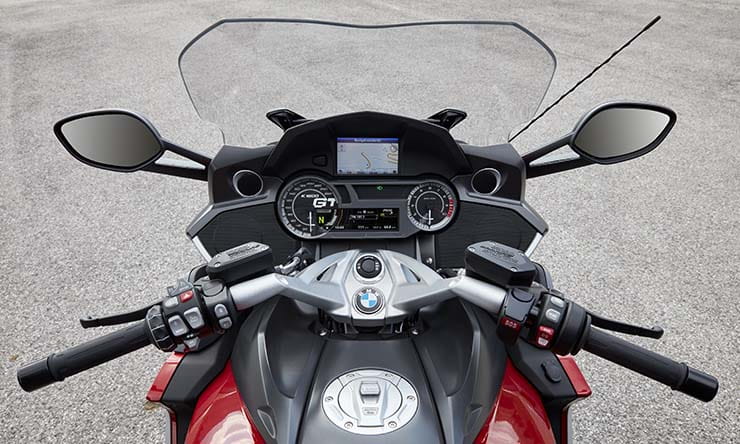 If there’s no reply the services are summoned, and the GT’s rider can also use the system for someone else’s emergency. Or at least that will be possible in the near future, but although the IEC system is about to go live in some European countries, it won’t reach the UK until September. (BMW assured us that Brexit had nothing to do with this delay…)

Thankfully there was no need to summon help on a launch ride that was occasionally cold and damp, and never anything less than exhilarating as BMW’s six-cylinder limousine carved through the south of Spain at a healthy rate and with a high degree of comfort. That big motor was majestic, churning out smooth, effortless torque almost from idle, with a gorgeous straight-six gurgle at low revs, pulling ever-harder through the midrange, and revving smoothly as the bike catapulted effortlessly to three-figure speeds.

Its acceleration and entertainment value were both boosted by the bike’s Shift Assistant Pro quick-shifter, a new option on the GT, which worked very smoothly. Handling was very good too, the BMW steering accurately and with a light touch for a rangy, shaft-drive machine with a fuelled-up weight of over 300kg. Its aluminium beam frame is retained, but now fitted with a revised version of BMW’s semi-active Dynamic ESA suspension, which gives automatic, continuously optimised damping levels. 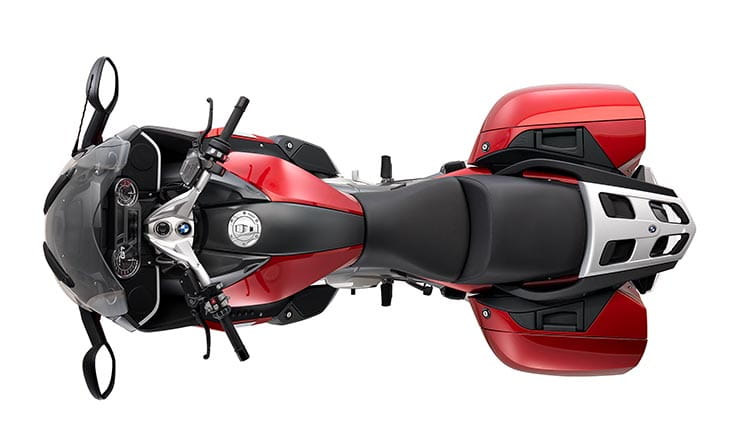 Changing riding mode from Road to sportier Dynamic firms up the suspension, which also allows push-button shock preload adjustment when the bike is not moving. The fine-tuning options are not particularly extensive but the system is very rider-friendly and well suited to such a powerful and heavy bike, managing to give supple ride quality yet firm the suspension when required by hard braking or acceleration.

Hard stopping was very much an option, thanks to the GT’s powerful four-piston front calipers and efficient ABS, in conjunction with capable Metzeler Roadtec rubber. Wind protection was very good, the red GT’s slightly enlarged and usefully height-adjustable screen not only keeping off the rain but doing so without too much noisy turbulence, although I wasn’t tempted to try the sound system at speed.

Being tall, I was less impressed by the shorter screen of the blue-finished GT Sport, which also incorporates a black-finished engine and gold brake calipers. But shorter riders might prefer that to the standard screen. Either way, it was impossible not to be impressed by the K1600GT’s array of luxury features, ranging from the roomy, central-locking equipped panniers to the powerfully heated grips and seat, which helped make that ride back to Almeria an enjoyable experience – even when what are normally Europe’s driest roads were being soaked by rain.

The K1600GT is far from cheap, costing £17,205 in its basic form and going up, via Sport and SE models to the top-spec LE, which is £20,045. This comes with features including reverse gear, hill start control, adaptive headlight, daytime running lights and an audio system that are options on other models. But you’ll still need to pay another grand or so for the launch bikes’ keyless ignition, quickshifter and central locking.

That’s a lot of dosh but a fully-loaded K1600GT LE is a seriously fast, exhilarating and comfortable bike, as capable of generating adrenaline on a curving main road as it of transporting two people serious distance in effortlessly relaxed style. More than ever, the GT earns those Gran Turismo initials.